“If he could just get on base more often, just think of the damage he could do.”

Since Billy Hamilton’s first full season in 2014, that’s a statement Reds fans haveÃ‚Â heard over and over. His speed is sensational, and his defense is dazzling –Ã‚Â but his bat has always lagged behind.

Coming into the 2017 season, many were cautiously optimistic about Hamilton, however, as the Reds’ center fielder showed noticeable improvement as last year wore on.

Hamilton slashed an ugly .236/.283/.350 heading into the all-star break. With an abysmal 5.6% walk rateÃ‚Â leading to such a low on-base percentage, he was only able to steal 22 bases. But he turned things around in the second half, batting .293/.369/.333 and wreaking havoc on the basepaths with 36 steals. Along with his increased walk rate (10.7 percent), the most encouraging sign was an increase in hard contact rate from 18.1 percent to 20.4 percent.

Although he ended the season on the disabled list, his campaign ended on a high note. The question was whether he could carry over that improvement into 2017 and beyond.

Through the Reds’ first 10 games of this season, Billy hit the ball well (.300 batting average) in 42 plate appearances but wasn’t exactly building on the improved plate discipline he showed last season (one walk). Through the next 13 games, he had only eight hits in 61 plate appearances, though he did walk six times. At the end of April, he was hitting only .213/.265/.245 with a wRC+ of 35, leaving many thinking his second-half performance in 2016 was nothing but a fluke.

What is Hamilton doing differently this month? He’s simply squaring the ball up better and hitting it harder. As heÃ‚Â told Mark Schmetzer of the Dayton Daily News:

Ã¢â‚¬Å“ItÃ¢â‚¬â„¢s just me learning the game and getting better,Ã¢â‚¬Â said Hamilton, whoÃ¢â‚¬â„¢s already in his fourth full season with the Reds and has sensed that he is, in fact, hitting the ball harder. Ã¢â‚¬Å“IÃ¢â‚¬â„¢m staying square and staying through the ball.Ã¢â‚¬Â

Here are Hamilton’s quality of contact stats broken down by month:

As you can see, Hamilton is, indeed, hitting the ball with more authority. With five games still to go in the month, he already has more balls hit over 90, 95, and 100 mph than he did in all of April.

HowÃ‚Â he’s hitting the ball is also making a difference. Although launch angle is a rising trend in baseball, a high one isn’t great for a hitter who has little power. Thus, fly balls are something Hamilton needs to avoid, while ground balls and line drives are typically good for him.

For reference, here is the breakdown for launch angle results (obviously,Ã‚Â these figures are indicative of a single batted ball, but they’re good to see as a guideline):

In April, Hamilton’s average launch angle was 12.4 degrees. That isn’t all that high (the league leaders hover in the 18- to 22-degree range), but it still wasn’t good for himÃ‚Â sinceÃ‚Â he was making weak contact. Hamilton has dropped his average launch angle to 8.5 degrees in May, which has equated to betterÃ‚Â success. He’sÃ‚Â hitting more line drives (31.5 LD% in May compared to 26.0% in April) and ground ballsÃ‚Â (41.1 GB% in April, 43.8% this month), while decreasing his fly-ball rate from 32.9% to 24.7%. Further evidence of Hamilton making better contact is a reduction in infield pop-upsÃ‚Â — which are almost always easy outs — from 16.7% to 5.6%.

Looking atÃ‚Â Hamilton’s season overall, he possesses both a LD% and FB% of 28.8%, marking huge improvements from his career rates (22.0 LD%, 34.4 FB%). He’s clearly made some adjustments to his swing to do that, and this shouldÃ‚Â bode well for the future if he continues on this trajectory. 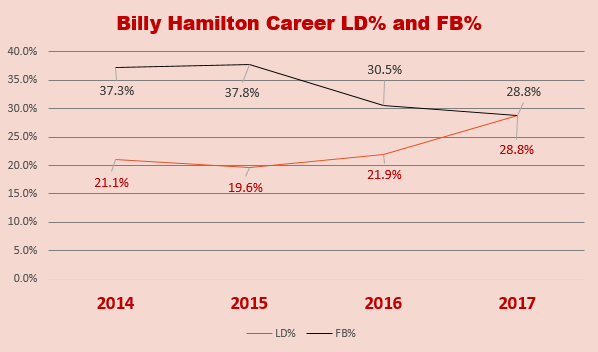 (Perhaps that time spent with Joey Votto is starting to pay off?)

You can’t read too much into month-by-month statistics orÃ‚Â make any definitive conclusions, but Hamilton has undoubtedly worked his way out of his early-season funk. While hisÃ‚Â plate discipline is still a work in progress, he’s making more solid contact and hitting line drives rather than weak grounders and pop-ups, which is encouraging. The question is: can he continue this throughout the whole season?

Whether he does or doesn’t, he’ll still be the most exciting player in the game when he does get on base.