[This post was submitted by loyal Nation member Matt Habel. If you remember, Matt wrote about Rebuilding While Rebooting a couple of weeks ago. Thanks, again Matt.]

2017 was not penciled in to be a great year for the Reds, and despite some early signs of potential .500 baseball, things will more than likely regress closer to the preseason projections. The rebuild is not quite complete as injuries are taking their toll and younger players are showing that they are in fact young players. What is important is that we remind ourselves that winning, or in this case losing, is not everything and there are still encouraging signs to focus on and help us stay positive.

In the bottom of the 7th inning on Tuesday night against Cleveland, Eugenio Suarez entered the game as a pinch hitter and hit a game-tying, 3-run home run. While the game did not end in favor of the Redlegs, it goes without saying that SuarezÃ¢â‚¬â„¢s shot greatly improved their odds of winning. According to FanGraphs, it increased the RedÃ¢â‚¬â„¢s win expectancy from 18.4% to 55.0%. ThatÃ¢â‚¬â„¢s a delta of 0.366, which is a huge number for one game for one player. For reference, VottoÃ¢â‚¬â„¢s career +WPA (sum of all positive events) per game is 0.10. Suarez was worth 3.6 Vottos in terms of WPA with just one at-bat, granted on a very small scale.

WPA, or Win Probability Added, is the metric that quantifies how much a single player affects their teamÃ¢â‚¬â„¢s chances of winning the game. There are positive events (+WPA) and negative events (-WPA) that sum into one number (WPA) to provide some color to their historical performance. This does not predict if a player will be Ã¢â‚¬Å“clutchÃ¢â‚¬Â going forward; it is only descriptive of what has already happened. It is also a cumulative stat, meaning players with more opportunities to impact the game will have a higher +WPA and -WPA, ultimately giving them more chances to build a higher WPA.

SuarezÃ¢â‚¬â„¢s home run made me curious about how Reds players of the recent generation have contributed to the teamÃ¢â‚¬â„¢s successes and failures. I was also curious how some of the younger players would stack up, considering they are handicapped by having significantly fewer opportunities than the teamÃ¢â‚¬â„¢s former veterans. 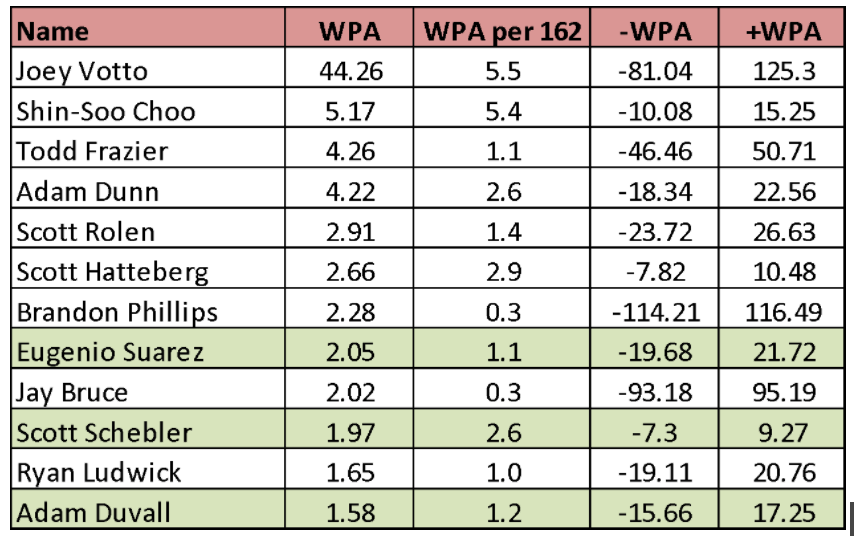 This article is not about Joey Votto as he has already gotten a lot of attention recently, and rightfully so. This is just another way of showing how important Votto has been for the Reds during his career. His WPA margin from the next player, interestingly Shin-Soo Choo, is remarkable. Even when you consider that defense is not captured in a hitterÃ¢â‚¬â„¢s WPA (it is attributed to the pitcher) you will not convince me that it would be worth enough to close the gap that much. After all, Votto has won a Gold Glove and his defense was a positive at one point. Votto has performed incredibly well throughout his entire career with the Reds and high leverage situations have been no exception.

My next favorite part about the chart and what this article is really about is that we see three other current Reds (Scott Schebler, Suarez, and Adam Duvall) in the top 12 of all hitters since 2007. When we sort by WPA per 162 games, we can see an even more impressive distribution with all three players falling in the top 8. Ã‚Â With the nature of this statistic being dependent on the amount of opportunities, I do not want to get too deep into comparing players on WPA. However, I do think it is really cool to see that several guys who have recently joined the organization have shown that they are capable being contributing to winning games.

Like I mentioned above, WPA does not predict what will happen in the future. I am not looking at this chart saying to myself that in a high leverage situation in the future I would rather have Schebler coming up than Duvall. But what we can do is look at the story that it tells.

In the midst of a pretty painful rebuild, including trading away some really likeable players and losing 94 games a year ago, there has still been some good to come out of it. Adam Duvall switched to a brand new position in 2016 and became an All-Star. He advanced a round in the Home Run Derby and got to face off with Todd Frazier in one of the highlights of the 2016 season. Scott Schebler just hit a home run in three straight games and is challenging Jose Peraza for the title of centerpiece in the Frazier trade, which certainly seems to be working out in the Reds favor. Both are making life for Dick Williams tougher (in a good way) and also putting pressure on Jesse Winker to perform in AAA.

Last but certainly not least, Eugenio Suarez has shown in his age 25 season that he has the tools to be a player for the team to build around. After a rocky transition to 3B last year and some inconsistency at the plate, a brand new player has emerged in 2017. He has given the fans something and someone to get excited about. Baseball as a whole may have a branding problem, but that does not mean that Cincinnati wonÃ¢â‚¬â„¢t fall in love with their favorites very quickly. Eugenio (even the name is loveable!) is on the fast track to being that next guy and being able to see that sooner rather than later is a saving grace to the fans.

These three players may not all be around for the next competitive Reds team. But they have created a good base for which that team can start to be built and show fans that the front office is capable of executing this rebuild. Joey Votto will always be Joey Votto, but when you to start to see the fruits of these rebuilding trades produce young talent with potential to win games, it makes the losing a little bit easier.