Two nights ago, I learned that the phrase “hat trick” originated from the cricket tradition of awarding a bowler a commemorative cap for hitting three wickets with three consecutive bowls. Well, it was either that or the bowler was allowed to pass his cap around for a monetary collection as award for his feat — the internet wasn’t entirely sure. Regardless, Nashville Predators centre Colton Sissons had his pickÃ‚Â of caps thrown on the ice to do with what he willed after recording his second hat trick of the season and sending the Predators to the Stanley Cup finals.

When they announce a Colton Sissons hat trick during a TV timeout… #StanleyCup pic.twitter.com/pEhdo9gf3b

Sissons’ was my hometown team’s unlikely hero Monday night, just as (are you ready for this tenuous and forced transition?) Scott Feldman was the Reds’ unlikely hero against the Indians.

Going 6.0 innings and striking out nine — including the first five batters he faced — with only one run allowed, Feldman gave the bullpen a much-needed rest, relieving the relievers if you will. Maybe the effort was penance for his last start against the Cubs, in which Feldman only lasted 2.2 innings while yielding seven runs, or maybe Feldman isn’t quite as awful as I and others originally pegged him.

Feldman’s Monday night outingÃ‚Â was only his fourth best start of the year according to game score, which, when put in the context of Feldman only having 10 starts, means nearly half of his starts have been well above average. Really, if you ignore the Cubs start and his May 2 outing against the Pirates, Feldman has a 2.36 ERA and 40 Ks in 49.2 innings.

So which Feldman is for real? The one who dominated in half of his starts or the one from the Cubs and PiratesÃ‚Â affairs? Why does Feldman keep surprising Reds fans and can it possibly last?

Terry Francona has been described many ways: frank, meme-worthy, innovativeÃ¢â‚¬â€and that’s just from one article. What’s understood, even if it isn’t explicitly conveyed in those adjectives, is that Francona is one of the best managers and best students of the game. So when Francona says “Feldman lived at the bottom of the strike zone and we didn’t do a lot;” he’s not wrong. 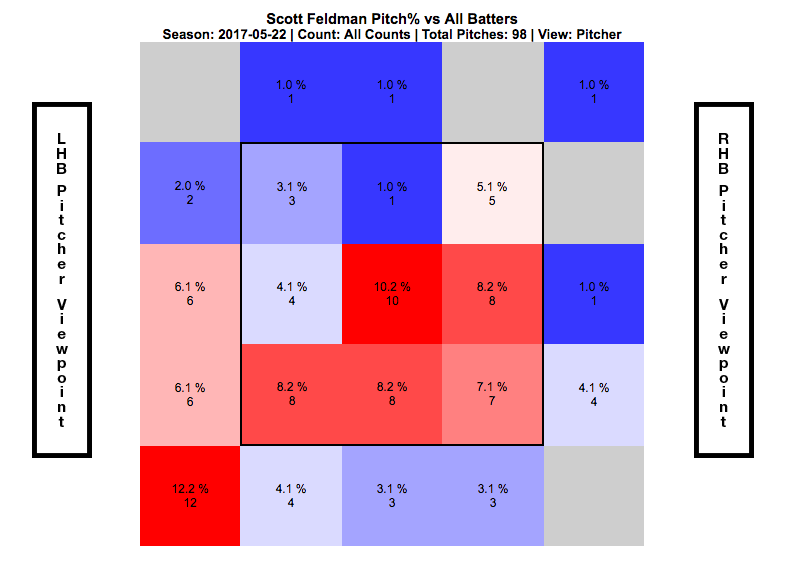 Nearly 50% of all of Feldman’s pitches were either low in the zone or low and away, resulting in a lot of meaningless contact. Feldman does have a tendency to live low though. In his disastrous start against the Cubs, just over 40% of all his pitches were in the same area of the zone, but those were hammered to the tune of 50% hard contact, as opposed to 33% hard contact against the Indians.Ã‚Â 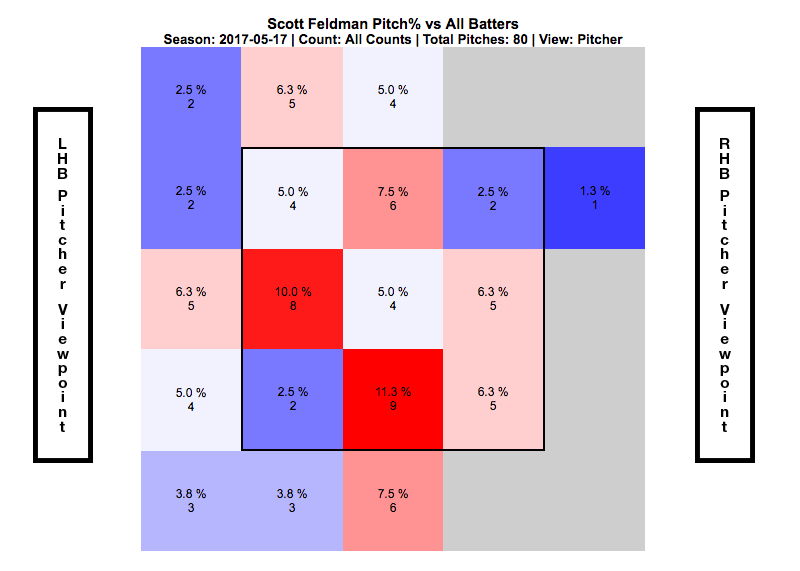 While Francona may have been right in his assessment that Feldman dominated Monday’s game because he lived low more than usual, that hasn’t been the reason for his sustained success over the season. Feldman tends to live low regardless of the gameÃ¢â‚¬â€on the season about 40% of pitches fall in the same low and away, inside/outside zone region. 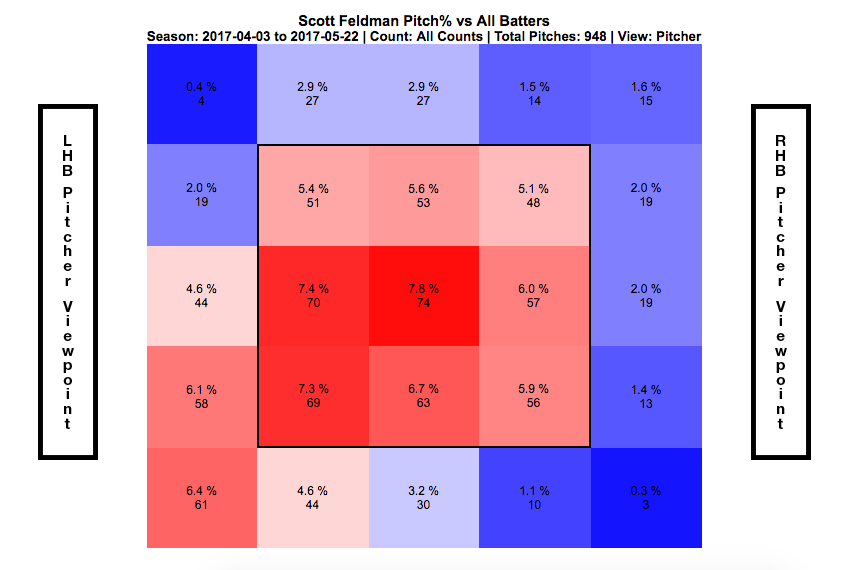 The hard contact has been there too, though at 31.3%, it’s more in line with Monday’s start. That number actually represents a regression for Feldman on his career, the highest number he’s posted since 2008 when he got rocked to a 5.35 FIP.

Looking at strikeouts provides no answers either. In Feldman’s five best starts, he’s struck out 26 and walked five. In his five worst? 21 strikeouts, 17 walks. But it stands to reason that a pitcher will walk less and strikeout more when he’s doing better.

Other fun tidbits that give no insight into Feldman:

On the first point, Feldman is not the pitcher he was in 2009 or even 2013, but he’s not that different either. He still relies on his cutter complemented by a strong sinker and a nice curve. All three pitches have lost a tick or two in speed, but the curve is still his out pitch and his most valuable while the cutter and sinker tend to getÃ‚Â hit around a bit. The only real change in Feldman’s repertoire has been the return of his slider, last seen in 2011.

Basically, Feldman has always been a pitcher who has one good outing for every bad and a lot of average in between. The Feldman against the Indians is going to happen just as often as the Feldman against the Cubs because Feldman’s stuff rarely changes. Look at his 4.45 SIERA and you can expect his numbers to all take a step back as the season goes on. Again, that regression stands to reason because Feldman is striking batters out nearly 6% above his career level and walking 2% more.

Feldman has continued to surprise Reds fans with success not because the success is surprising but because the expectations on him were so low to begin with. Heck, when the first batter you face in the new season homers and then only hits three more dingers in his next 190 plate appearances, fans are not going to have a lot of confidence. First impressions speak volumes, and Scott Feldman’s first impression wasÃ‚Â a limp handshake and an inarticulate introduction.

Going forward, Scott Feldman will probably take a step back, but not too big of one. He’s a decent big league pitcher who peppers the lower zone with utterly unimpressive stuff. For the Reds, the takeaway is at least he’s not Bronson Arroyo. Feldman is the 15-year old Toyota Camry with a dented bumper to Arroyo’s Ford Pinto on cinderblocks.

As Colton Sissons proved Monday night, anyone who laces up the skates can leave a hero. Scott Feldman’s hat trick may be yet to come this season, but while we’re waiting, expect average start after bad start after pleasantly good start, week in and week out for the rest of the season. Or, as Feldman himself said, “Baseball’s just one of those funny games. You have some good and some bad, and you’ve just got to try to battle. … It’s a long season.”