The Colorado Rockies scored six runs in the top of the fifth inning to take an 8-3 lead. It was looking like the Reds were well on their way to their eighth consecutive loss.

The Reds very easily could have mailed it in today, and no one would have blamed them. However, they came up with a 6-run bottom of the sixth inning, capped off by a three-run home run by Scott Schebler.

The big comeback wasn’t even the biggest story of the day.

AsherÃ‚Â Wojciechowski came into pitch in the top of the sixth. Many Reds fans, myself included, had never heard of Asher prior to today. He was a former first round pick who was out of baseball in April when the Reds picked him up.Ã‚Â Wojciechowski retired the first 11 batters he faced, and left with two outs in the ninth inning to a standing ovation.

After an introduction, the battery of Wojo and Mesoraco quickly became an effective duo for the @Reds. pic.twitter.com/BGNNdp9cJC

Raisel Iglesias retired the only batter he faced to finish off a well-earned 12-8 win for the Reds. The seven game losing streak is over! 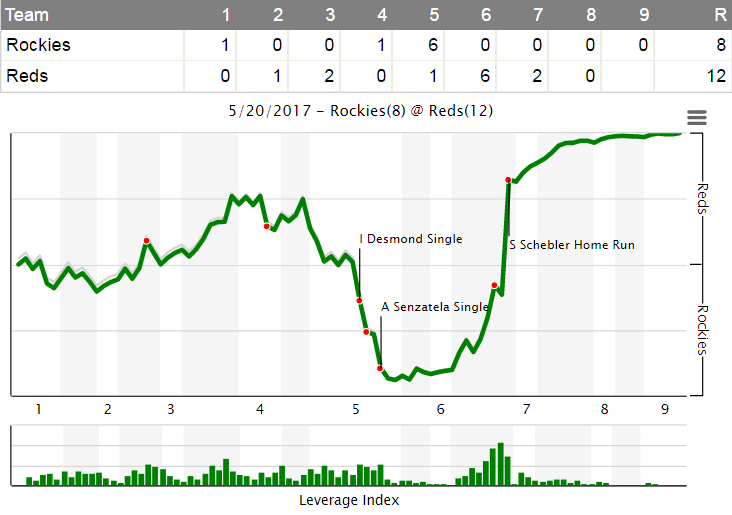 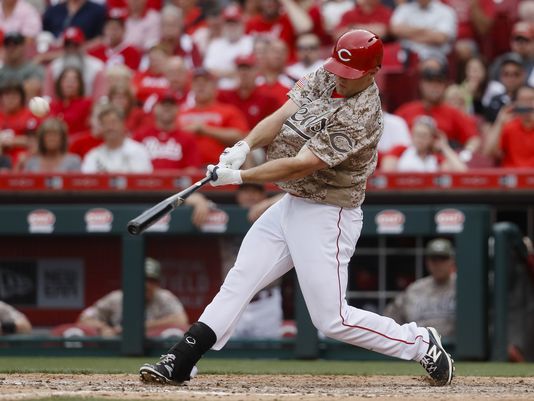 According to FangraphsÃ‚Â WPA statisticÃ‚Â (winning percentage added), the most important play of the game was Scott Schebler’s 3-run home run in the 6th inning with 2 outs, giving the Reds a 10-8 lead.Ã‚Â That play increased the Reds chances of winning by 38.5% (from 42.9% to 82.2%).

AsherÃ‚Â WojciechowskiÃ‚Â made his Reds debut in the 6th inning while the Reds were down 8-4. The Reds scored 8 runs while he was in the game, andÃ‚Â Wojciechowski retired the first 11 batters he faced to preserve the comeback.Ã‚Â He was actually a first round draft pick back in 2010 from the Blue Jays, but was out of baseball in April when the Reds picked him up. Zach Buchanan of the Cincinnati Enquirer wrote about Wojciechowski’s story earlier today, including this cool way Louisville Bats manager Delino DeShields told him he was called up.

.@AsherWojo describes to @JeffPiecoro a whirlwind day – from Triple-A Louisville in the wee morning hours to first MLB win with the @Reds. pic.twitter.com/LPP59Olydd

Devin MesoracoÃ‚Â made his first start since last Sunday (heÃ‚Â had been dealing with a sore hamstring), and he didn’t disappoint. Mesoraco hit a solo home run, and also walked and drove in another run earlier in the day (he was also robbed of an extra base hit by a ridiculous play by Nolan Arenado). It sure is good to Devin back!

Scott ScheblerÃ‚Â had the big hit today, hitting a 3-run bomb to give the Reds a 10-8 lead. It just might have been the biggest hit by a Red so far this season. It was his 11th home run of 2017. Schebler alsoÃ‚Â juuuuuuust missed a grand slam in the 3rd inning. He had to settle for a sac fly.

Billy Hamilton had a big day, andÃ‚Â increased his on-base streak to 20 games with a walk in the first inning. Billy then stole second base, and despite a pitch-out, the throw wasn’t even close. Hamilton now has 22 stolen bases, which is 10 more than anyone else in the MLB entering today. Billy later walked again, and then later turned a sac bunt attempt into a single. I don’t know if there is anyone else who could have turned that bunt into a single. Hamilton’s speed is simply unbelievable.

Jose PerazaÃ‚Â hit an 0-2 slider out of the strike zone for an RBI single in the third inning, which gave the Reds a 3-1 lead at the time.

Scooter GennettÃ‚Â had two hits off the bench.

Tim AdlemanÃ‚Â couldn’t make it through five innings today. He was able to pitch around a lot of traffic for the most part today (7 hits, 3 walks), but it all fell apart in the 5th inning. Adleman is a nice guy to have in your system to fill the rotation when a guy gets hurt, but that is about it.

Adam DuvallÃ‚Â is normally really good defensively, but he lost a fly ball in the sun in the 5th inning that would have been the final out of the inning. Instead, the Rockies ended up scoring four additional runs.

Drew StorenÃ‚Â has been pretty good this year, but he gave up a 2-RBI single to the opposing pitcher. Storen also hit his MLB most sixth batter.

The Reds got a major benefit from a replay overturn in the 5th inning. Nolan Arendao over-slid third base, and Eugenio Suarez wisely kept the tag on him. I really hate replay being used for over-slides. That isn’t why replay was put into existence. I think the MLB should make a rule that replay can’t be used against a runner for over-sliding, but that an over-slide can only be called live by the umpire. Now, if the umpire calls a runner out for over-sliding, but the manager thinks he shouldn’t have been, that should be review-able.