The difference between last year’s historically bad Reds bullpen and this year’s has been remarkable. To some degree, that was expected. Raisel Iglesias and Michael Lorenzen were slated to pitch in relief from day one, and Drew Storen was signed as another dependable arm at the back-end of the ‘pen.

But what no one expected was the contribution the team has received from Wandy Peralta.

To say this performance came out of nowhere would be an understatement. While he posted solid numbers in the minor leagues, the 25-year-old left-hander has never thrown the ball this well and never gave much of an indication that he couldÃ‚Â pitch like this. In 578.2 innings, he struck out only 17.5 percent of the hitters he faced in the minors. Paired with below-average control (10.0 BB%), Peralta never received much attention before this season.

The southpaw signed as a 18-year-old with the Reds in 2009 and was never found in the organization’s top prospect rankings. He slowly worked his way through the system, though, moving up a level almost every year.Ã‚Â Peralta went back and forth between starting and relievingÃ‚Â in his first few seasons of professional baseball, throwing at least 17 innings out of the bullpen,Ã‚Â in addition to starting, every year except 2014. Aside from his first two seasons in rookie ball, he was more successful as a reliever; for his minor league career, he struck out nearly a batter more per nine inningsÃ‚Â out of the bullpen, which isn’t all that surprising.

That earned him a September call-up to Cincinnati. The numbers were underwhelming, as he walked more batters than he struck outÃ‚Â in 7.1 innings as he posted a forgettable 6.87 xFIP. Given the Reds’ 40-man roster crunch during the offseason, some expected Peralta would be one of the players designated for assignmentÃ‚Â given his solid but unspectacular pedigree. Fortunately, the front office held on to him, and it has paid huge dividends.

Early in spring training, Bryan Price expressed confidenceÃ‚Â (story by the Enqiurer’s Zach Buchanan) in Peralta, even saying he was the “most impressive” pitcher in camp. The young pitcher’s spring performance didn’t do much to back up Price’s claim, but the lefty made the club anyway. Now everyone is seeing why.

Here are some of his ranks among MLB relievers and among left-handers specifically: 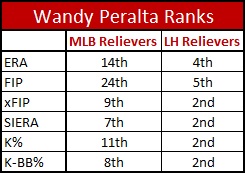 In 17 innings, Peralta has only given up six hits and holds a ridiculous 1.06 ERA and 2.02 xFIP. His strikeout rate is an absurd 38.3 percent, and he’s displayed much better command, bringing his walk rate downÃ‚Â to 6.7 percent. He’s been arguably the second-best lefty reliever in the game, trailing only the Tigers’ Justin Wilson in xFIP, SIERA, K%, and K-BB%. And he’s no LOOGY, either; his success is comingÃ‚Â against both lefty (38.5 K%) and righty (38.2 K%) hitters.

While Peralta’s .156 BABIP may seem to indicate a degree of good luck, he simply isn’t allowing hard contact, which makes life easier for his fielders behind him. Among all pitchers with at least 25 batted balls against them, only nineÃ‚Â pitchers (out of 406 qualifiers) have a lower average exit velocity against them than Peralta’s 81.6 mph. Via Fangraphs’ quality of contact stats, Peralta ranks 24th among relievers in soft contact rate (27.3 percent) and has the fourth-lowest hard contact rate (15.2 percent). (Note: Raisel Iglesias is tied with PeraltaÃ‚Â and Drew Storen is eighthÃ‚Â in the league in Hard%. Not too shabby.)

Instead of the four-pitch mix he was utilizing last season, Peralta has scrapped his sinker and started throwing his slider more, as Buchanan and Doug GrayÃ‚Â pointed out early in the season. Along with his changeup, it’s become a key putaway pitch for him. BattersÃ‚Â are swinging and missing at his slider 26 percent of the time, and when they do hit it, they’re not doing much with it, with a .133/.133/.267 slash line and average exit velocity of 82.3 mph. Let’s not undersell his changeup, however. He’s generating whiffs 40 percent of the time he throws it, complementing his mid-90s fastball very well. When hitters are making contact with it, they’re hitting it at an average of just 83.3 mph and batting only .118/.158/.176.

No one knows if Peralta will maintain numbers thisÃ‚Â good all season, but his start is no fluke. He worked hard on developing his slider over the offseason, and it has turned him from a pitcher viewed by many as organizational depth to one of Price’s most trusted bullpen arms.

Image courtesy of Kareem Elgazzar of the Cincinnati Enquirer.