Another week in the books,Ã‚Â and almost like clockwork, the Reds as a whole are down again.Ã‚Â Their week on paper wasn’t as bad as it felt when watching the games – they took one of two at home against the powerful New York Yankees, and then flew to San Francisco to get a taste of their own medicine. After walloping the Giants less than a week previously, the Redlegs were only able to secure one win in the city by the bay, including a heartbreaking loss in a 17 inning game on Friday night.

During the last 7 days, as usual, individual player performancesÃ‚Â have been up and down. Some Red Hot players have cooled off, while a few popsicles have started to melt as the season gets warmer. Who’s Up, and who’s down? Let’s dive in. 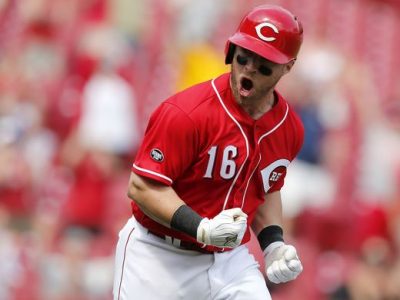 Once again, a player (or, in this case, a position group) has followed up an appearance on the Three Down list with an appearance on the Three Up list. And I’m not just handing it to these guys, either. Both Catchers had good weeks at the plate. Neither are hitting for any real power, but Mesoraco has continued to progress since coming back from nearly two years of injuries, and Tucker Barnhart has done nothing but hit doubles in the limited playing time he’s seen since Devin’s return.

Both Mesoraco and Barnhart have been lights out behind the plate as well. Tucker has been at or near the top of the Fangraph’s Catching defensive metrics leaderboard, and Devin is quickly rising up that same list, already the 24th most valuable defensive catcher according to Fangraph’s Def metric, an accumulative number similar to WAR.

As I mentioned earlier, neither of these guys are killing the ball. But above league average wRC+ and top-of-the-line defense is all you can ask from these guys. They’re getting the job done.

Alright, Redleg Nation. Which of these pitchers would you rather have?

Player A is Feldman, through 8 starts so far in 2017. Player B is 2016 Cincinnati Red Dan Straily through 8 starts in his breakout season. If it’s me choosing between these two guys, it’s a tough call. And that is WAY more than you were expecting to get out of Scott Feldman.

For the second straight season the Reds have signed low-risk, seemingly-low-reward contracts with two journeyman pitchers. And, for the second straight season, it looks like they’ve struck gold. Straily’s 2016 was remarkable by just about any measurement, and was capped off with a fantastic trade for the Reds front office that saw Straily go to Miami for a fringe top 100 prospect in Luis Castillo.

Although you’d love to see a rotation filled with top prospects, the reality is that you need guys like Feldman to eat innings at a high level. He’s undoubtedly a huge reason the Reds have won as many games as they have this season, and gives the team more than a fighting chance to win each game he steps on the mound. He’s a prime candidate for a trade deadline deal if he keeps up the work he’s done so far.

After struggling through the first part of 2017, Blake Wood has seemingly found a groove in the Reds bullpen. The last three outings for Wood have been phenomenal, but the success actually started a while ago. He hasn’t given up an earned run since April 24th against the Cubs, and has only given up 2 hits against the 33 batters he’s faced since.

Last season this sort of production out of a reliever would have been a godsend. This season, however, Wood is merely a nice-to-have. He isn’t being counted on for high leverage innings, mostly because he doesn’t need to be. To have a weapon like Wood able to come in whenever the team needs him and perform at a high level is key. We’ll see if he can keep it up throughout the season. 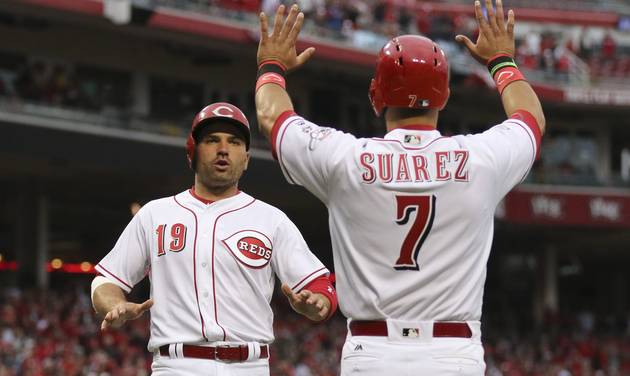 The best player in baseball has fallen into a slump. Okay, so Suarez might not legitimately be the best player in baseball, but an argument could have been made prior to this past week that he was playing like an elite ballplayer to start 2017. The Third Baseman’s hot start to the season was decidedly cool this past week, only managing three hits in 24 at bats. In case you’re wondering, that’s not good.

The defense has still been there, though. Comparisons to Nolan Arenado have been made, and whether that’s worthy praise or not, to even be in the same conversation as Arenado is certainly high praise. Let’s hope Genie makes it four weeks in a row that a ‘Three Downer’ becomes a ‘Three Upper’.

Lorenzen hasn’t been horrible – in fact, you’d be hard pressed to find a single Red who’s been absolutely horrible this season – but he hasn’t been that dominant pitcher we saw glimpses of early on in the season. Although he escaped the week without an earned run, Lorenzen’s 5.34 FIP and 6.46 xFIP tell the story a little better than his ERA. The eye test can also see something’s a little off with Lorenzen. He seems to be missing his spots up and to his right side of the plate. I’m confident he’ll figure it out, but for now, here he is.

Not exactly the kind of production you’re looking to get out of your cleanup hitter – or any hitter, for that matter. Duvall just plain didn’t show up for his redemption series against the Giants in San Francisco.

He’s still been the most valuable defensive LF in the NL according to Fangraph’s Def metric, and second in the majors behind only Justin Upton of the Tigers. It’ll take a lot more than a bad week to dethrone DuvAllStar in left, and with Jesse Winker not doing his part in AAA to force the Reds hand, it looks like he’s probably here to stay in ’17.