Something happened. Either the Good Guys won or they didn’t.Ã‚Â  I didn’t stay up to see it.Ã‚Â  I’ve got a 1-year old that gets up very early.Ã‚Â  Everything below was written before the conclusion of the game.

I was fortunate enough to see Johnny Cueto’s final start as a member of the Cincinnati Reds when he took the mound at Coors Field in 2015.Ã‚Â  I don’t think it will ever get easier seeing him sport something other than the Wishbone C.

Cueto was very good tonight, giving up 2 runs in 8 innings.Ã‚Â  We all figured he’d eventually stop scuffling against the Reds.

-In the 1st inning, Zack Cozart drew a walk that required him to lay off a few very close pitches. He did the same thing in the 8th inning.Ã‚Â  By my estimation, the ability for Zack to draw a walk at a decent rate was really all that was missing over the last several years from Zack’s game.Ã‚Â  I don’t know what the right answer is for Zack regarding contracts and trades and what-have-you, but he’s certainly made himself into quite a good ballplayer.Ã‚Â  Cozart was 0-4 with two walks in the game.

-Defensive metrics, especially early ones, are fraught with noise.Ã‚Â  Joey Votto, however, cares not!Ã‚Â  Entering the game, he was the 2nd-best defensive first baseman behind Brandon Belt.Ã‚Â  In the bottom of the 1st, Votto made a fantastic play on a ground ball requiring him to go to the ground and spin a bit.Ã‚Â  In the past, it doesn’t seem like a play he’d make.Ã‚Â  He also cut down Denard Span in the 5th after he cut off a throw home, and he made a few good picks. If Votto has gotten back to being at least average defensively, he’s got a few more 6+ WAR seasons in him.Ã‚Â  Votto was 1-6 at the plate.

-Scott Feldman was, again, pretty good against the Giants.Ã‚Â  He tossed 7 innings giving up only 2 runs.Ã‚Â  He struck out 2 and walked only 1 batter.Ã‚Â  His first earned run was via lead-off home run courtesy of Span.Ã‚Â  The earned run came after back-to-back-to-back bunts from Eduardo Nunez, Justin Ruggiano, and Cueto.Ã‚Â  A single from Span brought in Nunez.Ã‚Â  He now owns a 3.59/4.09/4.16 ERA/FIP/xFIP slash.Ã‚Â  That’s about as good as you can hope for from Scott Feldman. Kudos to him.

-Scott Schebler was 2-4 with a walk.Ã‚Â  That’s a decent night off Cueto and Co. With average-ish base running and defense and a 120 wRC+, Schebler’s been a pretty OK player.

-Wandy Peralta struck out Denard Span.Ã‚Â  That is an accomplishment over the last 2 games.

-Votto’s base running hasn’t been good this year.Ã‚Â  Coming into this game, he’d been the 16th-worst base runner in MLB.Ã‚Â  He hasn’t taken many extra bases all year and tonight he was doubled off 1st in the 1st inning on a soft liner.Ã‚Â  It wasn’t a good look for the former MVP.

-In the 5th inning, Buster Posey missed a fastball from Cueto due to being somewhat shielded by Billy Hamilton’s bunting bat.Ã‚Â  The ball hit umpire Tony Randazzo right in the neck extension on his face mask.Ã‚Â  Randazzo fell to the ground in heap and my stomach instantly was in a knot.Ã‚Â  It was a scary moment.Ã‚Â  Thankfully, he was OK.Ã‚Â  I guess the ‘ol bell just got rung.

-MLB.tv was about 2 minutes behind live tonight.Ã‚Â  I find it hard to believe technology hasn’t progressed to the point where this issue can’t be fixed.

-Tucker Barnhart laying down a successful sac bunt in the 10th lowered the odds that the Reds would score from 44% to 42%.Ã‚Â  Given that success isn’t guaranteed, and a failure would have dropped the odds to 28%, calling for a bunt in that situations is not good.Ã‚Â  There is one fringe case when a bunt is good.Ã‚Â  This was not that case.

-Extra innings on the west coast are not that fun.

QUOTE OF THE NIGHT

-Louisville Bats “manager” Delino DeShields batted Jesse Winker in the 6-hole tonight in Louisville.Ã‚Â  Ahead of Winker in the lineup were Hernan Irribarren, Zach Vincej, and someone I’ve never heard of named Zach Walters.Ã‚Â  All three of these players got to bat 5 times.Ã‚Â  Winker batted 4 times.Ã‚Â  DeShields routinely bats Winker 5th, 6th, and 7th.Ã‚Â  By my napkin math, in a little over a year under DeShields, Winker has been robbed of some 30 plate appearances by not being 2nd or 3rd in the order.Ã‚Â  If he gets to Cincinnati and you think “he could use some more work at AAA,” it’s not his fault.Ã‚Â  It is his short-sighted manager’s fault.

-Between last night and tonight, Scooter Gennett tripled in back-to-back at-bats.Ã‚Â  That has to be pretty rare. 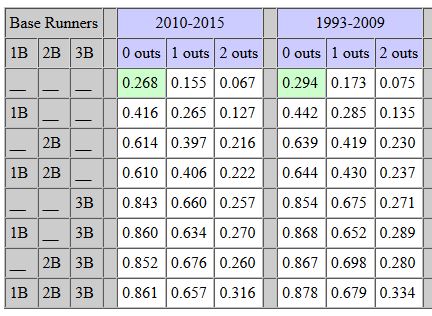