Entering this game, you’d be lying if you said you didn’t think the Reds had a good shot at winning.Ã‚Â  After all, they just outscored San Francisco 31-5 in a three-game tilt at Great American Ball Park. Although starter Bronson Arroyo’s ERA stood at a robust 6.53 entering the game, you sort of had the feeling the Reds could score what they needed…that turned out to be true.Ã‚Â  The Reds are now 4-0 against the Giants in 2017.

-Eugenio Suarez started a fantastic double play in the 2nd inning off the bat of Nick Hundley.Ã‚Â  Suarez’s defense is looking to be legit; not a flash in the pan.Ã‚Â  Coming into this game, Suarez ranked 1st among third baseman in Defensive Runs Saved (DRS) with 7, 1st in Ultimate Zone Rating (UZR) at 3.9, and 1st in UZR per 150 games (UZR/150) at 19.5.Ã‚Â  His DRS of 7 is 2nd in MLB for players at all positions.

-Billy Hamilton had two base hits and scored two runs.Ã‚Â  The narrative lately has been ‘When Billy goes, the Reds go.’Ã‚Â  Tonight was not an exception.

-Zack Cozart blistered two doubles, one of which scored Scooter Gennett from 3rd as the go-ahead run in the 8th.Ã‚Â  We are more than 20% of the way through the season and Cozart is hitting .356/.444/.596.Ã‚Â  Pretty amazing stuff from Zack.

-Joey Votto knocked in the first two runs of the game with a ground out and a broken bat single.Ã‚Â  He was intentionally walked in the 8th.

-Wandy Peralta is the man.Ã‚Â  He inherited two runners from Drew Storen and one runner from Scooter Gennett.Ã‚Â  None of them scored.Ã‚Â  If he can be even 85% of his current self, along with Michael Lorenzen and Raisel Iglesias, he makes up 1/3 of a New Age Nasty Boys.

-More on Bronson below.

-The Reds lineup allowed Ty Blach to get through the first 3 innings of the game tossing only 30 pitches. That’s usually a recipe for nothing good.Ã‚Â  They reached Blach for a run in the 4th, but the average outcome in that situation would have been 2 runs.Ã‚Â  (Yeah, this is a stretch for “THE BAD” section, but I dislike all this free swinging tomfoolery!)

-Jose Peraza continues to look terrible at the plate.Ã‚Â  His 1.5% walk rate is worst in baseball, narrowly taking that distinction from Brandon Phillips.

-After Votto was intentionally walked in the 8th, Adam Duvall struck out and Suarez flied out.Ã‚Â  I hate when the ‘ol IBB on Votto works.

-Bronson Arroyo tossed 6 innings, giving up 2 runs while striking out 3 and walking only 1 batter.Ã‚Â  He continues to be aesthetically pleasing to watch pitch, but he gave up many hard-hit balls tonight and you have to think pitching in San Francisco might have saved him a little on the stat line.Ã‚Â  Still, we’ll take many more games like tonight from Bronson, please!

-The fact that Arroyo only walked one batter should be a lesson to all the Reds young pitchers.Ã‚Â  Giving up two solo shots isn’t the end of the world.

QUOTE OF THE GAME

After a Joey Votto RBI single…

Thom: “Sounds like he broke his bat.”
Chris: “He’s got more of those.”

-Jose Peraza — of whom I had been an advocate — drives me endlessly crazy now.Ã‚Â  His approach at the plate is to take a swing with no stride (see Power, No) in all counts.Ã‚Â  This might be OK as a high-contact, 2-strike approach, but why guarantee yourself of hitting something weakly in early counts?Ã‚Â  If the Reds coaching staff has informed him that his approach is “fine,” then they should all receive a “fine.”

-Billy Hamilton has scored in 11 straight games. That’ll do.

-Billy Hamilton is still without a bunt hit in 2017.Ã‚Â  I think this is a shame.Ã‚Â  If bunting could be part of Billy’s game, he’d be oh-so-more awesome.

-Joey Votto has 33 RBI, which is one off the MLB lead of 34 RBI by Babe Zimmerman.

-I hate watching Denard Span hit.Ã‚Â  The way he wrenches his front foot backwards creeps me out! 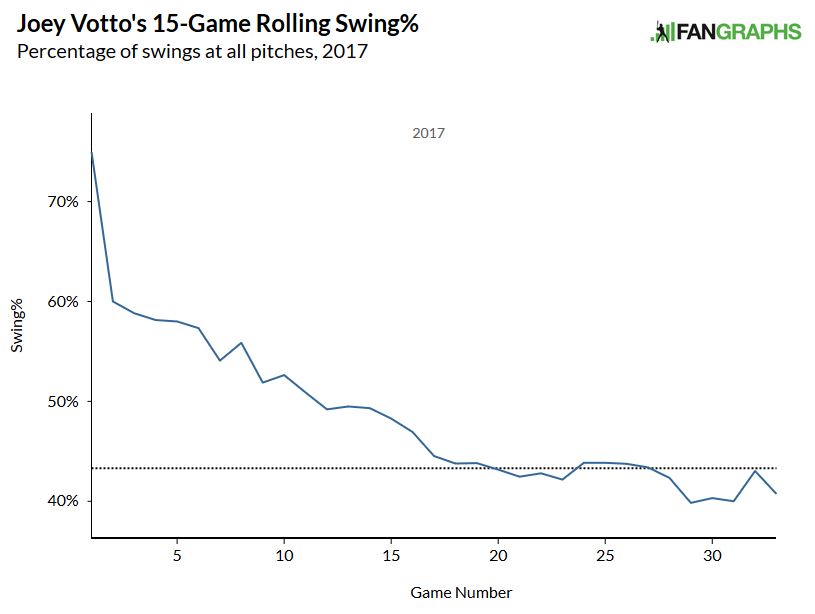