I have been following baseball all my life, and 1967 was the first season that I have clear memories of the games, statistics, and players (Vada Pinson and Jim Maloney were my favorites then).Ã‚Â  That era is as far in the past today as the 1919 Reds were when I as 12, and the Big Red Machine is now farther in the past than my dadÃ¢â‚¬â„¢s 1940 Reds (and his hero Ernie Lombardi) was in 1975. Ã‚Â I have seen the Reds greats from Pete to Joey, and everyone in between, Hall of Famers and comets, and many, many great moments.Ã‚Â  The best I ever saw peaked 30 years ago this month, and I thought I would recount the absolute wonder of Eric Davis in the first two months of the 1987 season.Ã‚Â  It was before the injuries, the ring, the controversies, and the overwhelming media presence that can turn anyone into a viral sensation in a day, and it was the finest sustained performance of all round baseball I have ever seen.Ã‚Â  LetÃ¢â‚¬â„¢s go back in the time machine to 1987Ã¢â‚¬Â¦ 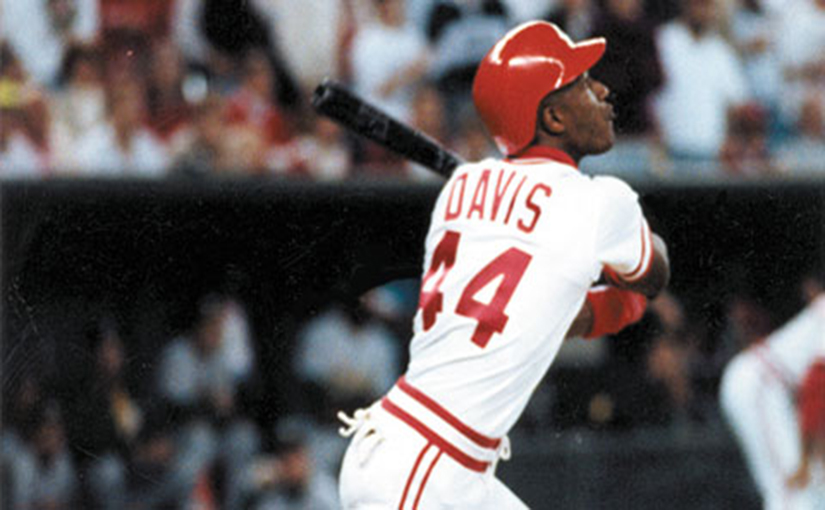 Eric Davis was the Reds 8th round pick in the 1980 draft, and it took him a while to work his way through the Reds system.Ã‚Â  Extraordinarily fast, some in the Reds organization wanted him to focus on hitting the ball on the ground (sound familiar Reds fans?).Ã‚Â  In his first two trials he struggled in the eyes of traditional observers, hitting for a low average with a high for the era strikeout rate.Ã‚Â  In retrospect, they focused on what Davis couldnÃ¢â‚¬â„¢t do at the time (make consistent contact and hit for average) and ignored what he could do (everything else). He had another slow start in 1986 (a .200/.298/.367 slash line on May 31st) but he warmed up in early June and finally became a regular in the outfield on June 15th.Ã‚Â Ã‚Â  In July, he won the NL Player of the month with a .381/.465/.702 slash line, with 6 HR, 16 RBI, and 25 SB in 26 attempts.Ã‚Â  He cooled off (duh) the rest of the year, but ended the 1986 season with a .277/.378/.523 line with 27 HR, 71 RBI, 97 Runs, and 80 steals in 91 attempts.Ã‚Â  He joined Rickey Henderson as the only players at the time to post a 20 HR/80 SB season.Ã‚Â  Keep in mind that due to his slow start, he posted those totals in only 109 starts.Ã‚Â  His 5.3 bWAR led the Reds and ranked 6th in the National League.

And then he raised his stratospheric game to an even higher level. 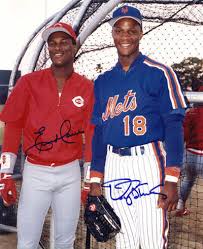 The peak was a weekend series against Philadelphia on May 1-3.Ã‚Â  Davis went 9-13, with 5 homers (2 of them grand slams), 11 RBI, 7 runs and a steal.Ã‚Â  After the final game of the series, he was hitting a ridiculous .411/.475/.900.Ã‚Â  The next game he stole a home run from his boyhood teammate Darryl Strawberry in a 2-0 Reds win.Ã‚Â  On May 30th, he hit his third grand slam of the month as the Reds beat the Pirates 6-2.Ã‚Â  The May line of .329/.404/.841 with 12 HR, 36 RBI, 23 runs, and 11 steals (in 11 attempts) easily gave him his second straight Player of the Month award, becoming the fourth player to win it in consecutive months (previously accomplished by Bob Gibson, Dave Parker, and Don Mattingly).Ã‚Â  He had won three of the last five NL Player of the Month awards, a record only exceeded once since (Mark McGwire won three straight from Sep 1997 thru May 1998).Ã‚Â  The equivalent of going viral in 1987 was making the cover of Sports Illustrated, and Eric was there on the May 25th issue. 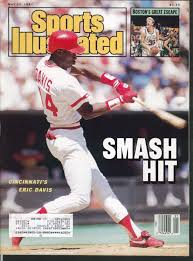 The article was written by Ralph Wiley, and the sub-headline stated Ã¢â‚¬Å“CincinnatiÃ¢â‚¬â„¢s Eric Davis, known as E, reminds some of Mays, Aaron, and ClementeÃ¢â‚¬Â. Ã‚Â The article talked about his upbringing and the importance of his father Jimmy to his career.Ã‚Â  It also touched on his struggles in the minors (Davis considered quitting in 1981 to play college basketball). Ã‚Â The rest of the article consisted of relentless superlatives and comparisons Ã¢â‚¬â€œ Eric did his best to dispel such comparisons, quoted as saying Ã¢â‚¬Å“IÃ¢â‚¬â„¢ve got a long way to go. IÃ¢â‚¬â„¢m being compared to the impossible.Ã‚Â  I never saw Mays, Aaron, or Clemente play.Ã‚Â  What about people I face every day? Tim Raines is the best?Ã‚Â  Mattingly is the best?Ã‚Â  Why not compare me to my peers?Ã¢â‚¬Â 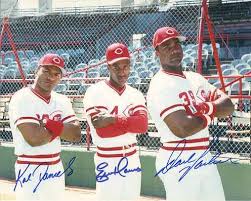 The highlight plays continued even as Davis regressed to a more human level of play.Ã‚Â  He stole home runs from Jack Clark in back to back games in June.Ã‚Â  He missed several games with an injured ankle but was the leadoff hitter and starting LF for the National League in the All-Star game.Ã‚Â  He had another strong month in July (.348/.434/.641) but slumped in August.Ã‚Â  On September 4th, he was involved in a play that symbolized DavisÃ¢â‚¬â„¢ future career with the Reds.Ã‚Â  With the two on and two out and the Reds clinging to a 4-3 lead at Wrigley, Brian Dayett launched a drive to the ivy.Ã‚Â  Davis ran it down, made the game saving catch and crashed into the bricks.Ã‚Â  The resulting rib injury knocked Eric out of the lineup and eliminated the Reds slim chance to steal a division in 1987.Ã‚Â Ã‚Â  Davis, Kal Daniels (who posted one of the great seasons in Reds history with a .334/.429/.617 line), and a good bullpen carried the overmatched Reds to a second place finish behind the Giants (the starting pitching was really bad, sound familiar Reds fans?).Ã‚Â  EricÃ¢â‚¬â„¢s 7.9 bWAR (in 129 games) was the second highest in the National League that year (behind Tony Gwynn), and the 11th best for a position player in team history (a list dominated by Big Red Machine members and Frank Robinson).Ã‚Â  Andre Dawson of the last place Cubs somehow won the MVP (his 4.0 WAR wasnÃ¢â‚¬â„¢t in the top 15 of the NL), as writers in the 1980Ã¢â‚¬â„¢s were obsessed by RBI counts (a league leading 137) and narrative – Dawson had signed a blank contract to play for the Cubs in 1987 during the height of the collusion era. 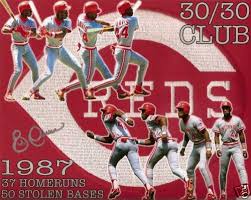 Seriously, who has done that?Ã‚Â  Bonds and Ruth may have created more runs (and we will see what May 2017 holds for Bryce Harper), but with the steals and Gold Glove defense in CF?Ã‚Â  Credit to Joel Luckhaupt for the 1986-87 combined stats.

He did it all in era when one had to hope the highlights were captured on Sportscenter or the local news.Ã‚Â  There was no MLB Network and only about 45 games a year were shown locally on WLWT.Ã‚Â  The only networks that presented games nationally were TBS and WGN, so if the Reds werenÃ¢â‚¬â„¢t playing the Braves or Cubs, odds are you didn’tÃ‚Â see EricÃ¢â‚¬â„¢s heroics live.

There is no player I would want to see more under the Statcast microscope (along withÃ‚Â  Davey Concepcion in the field).Ã‚Â  Eric was the smartest player I ever saw, and his resilience was remarkable.Ã‚Â  He won the Comeback Player of the Year with the Reds in 1996 after retiring in 1994, and played well while being treated for colon cancer with the Orioles in 1997.Ã‚Â  And thirty years ago, he was the best I ever saw.

Eric, everyone that saw you play in 1987 remembers. 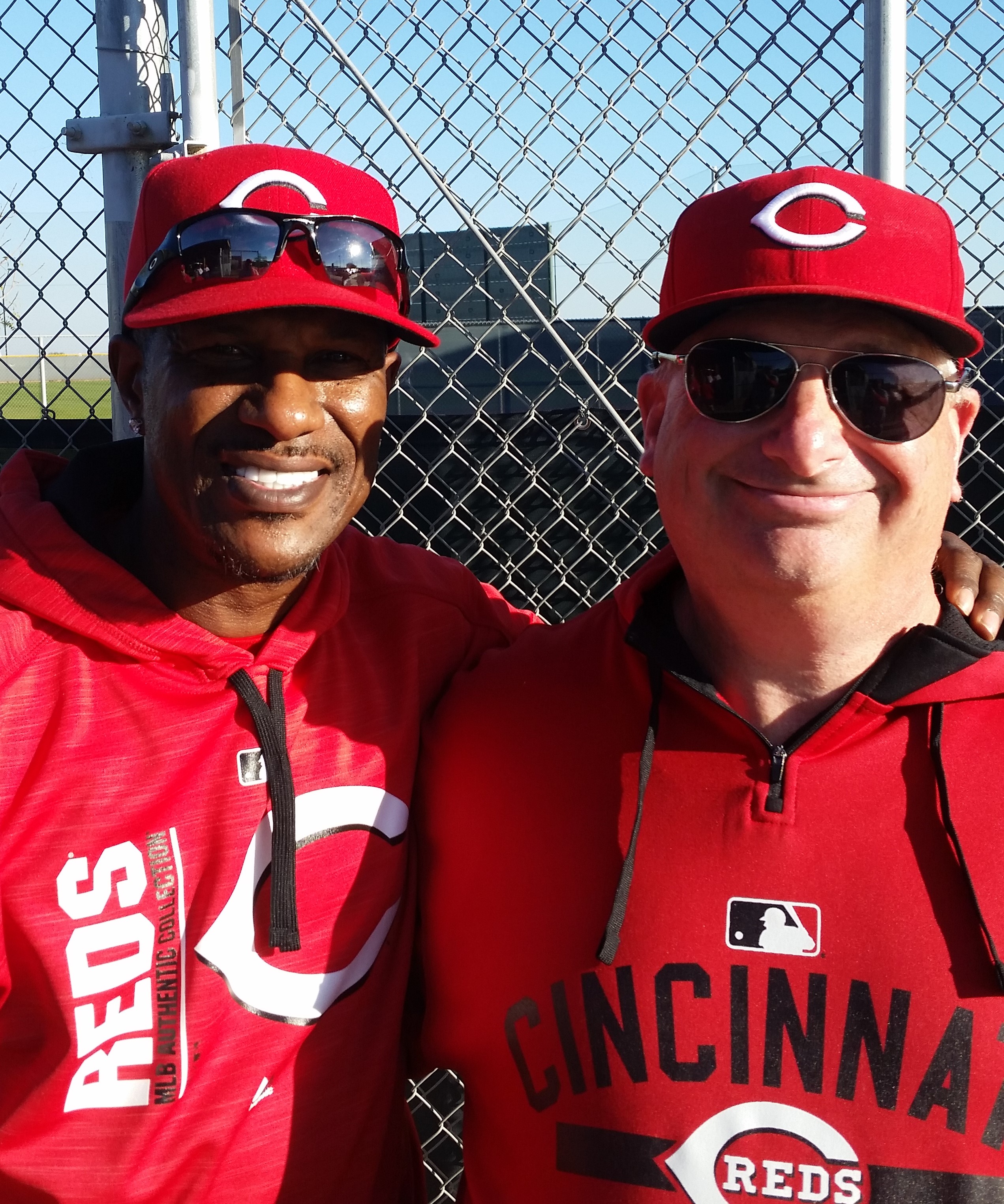