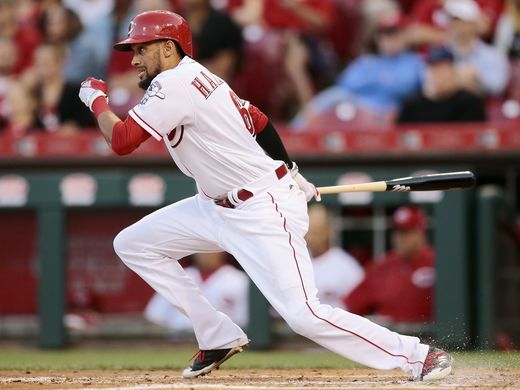 My theory is confirmed. All I need to do is put a player in my Ã¢â‚¬ËœThree DownÃ¢â‚¬â„¢ list, and heÃ¢â‚¬â„¢ll start obliterating baseballs. Billy Hamilton has had perhaps the best week of his career, with his slash line sitting at.355/.429/.710 before MondayÃ¢â‚¬â„¢s game against the Yankees. Included in that week were three unforgettable triples, one in each of the games against the Giants, a Billy Bomb (his first home run of the year), and nine stolen bases, bolstering his major league lead in that category.

HeÃ¢â‚¬â„¢s been playing like a man on fire, which is exactly what you want out of the leadoff spot. HeÃ¢â‚¬â„¢s got some work to do to repair his overall statistics for the year, but I think weÃ¢â‚¬â„¢re all hoping he was just slow out of the gate, and the real Billy Hamilton has stood up. HeÃ¢â‚¬â„¢s got a league average walk rate at 8.0%, and a somewhere between average and above-average strikeout rate at 18.1%. If he can keep those numbers up, heÃ¢â‚¬â„¢ll be deadly in the leadoff spot.

Out of all the Reds putting up big numbers over the past week, it should be no surprise that Joey Votto led all of the team with a 230 wRC+ over the past seven days. HeÃ¢â‚¬â„¢s walked 37% of the time, which is straight up bonkers. ThatÃ¢â‚¬â„¢s resulted in him scoring 9 runs, second only behind Billy HamiltonÃ¢â‚¬â„¢s 11 over the last week. He also drove in 7 runs of his own, and although the metrics donÃ¢â‚¬â„¢t back it up, heÃ¢â‚¬â„¢s been playing an admirably passionate defensive first base. Put the C on his chest, already.

This spot could have gone to just about everyone on the 25 man roster not listed below. Jose Peraza, although still with a below average wRC+ has really turned things around, and Duvall, Suarez, Cozart and Schebler all continue to be above average to great major league hitters.

But, on a team with the worst starting pitching in the league, itÃ¢â‚¬â„¢s hard to ignore a complete game shutout. Scott Feldman did exactly that on Sunday afternoon, cruising through a defeated Giants lineup and beating our collective Favorite Player on a Different Team Johnny Cueto at Great American Ballpark. He didnÃ¢â‚¬â„¢t look as dominant as most guys who throw complete game shutouts tend to look, but you canÃ¢â‚¬â„¢t argue with the results. Between all of the starting pitching efforts throughout the Giants series, the bullpen is now likely at 100% full rest heading into a rough matchup against the even-hotter New York Yankees. 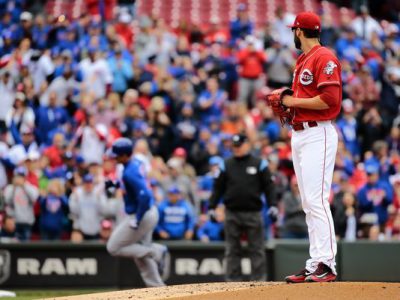 One of the two young pitchers sent to Louisville in the last week, Reed is the only one of the duo who probably deserved to get demoted. In his only appearance this week, he went 2 innings, walked four batters, and gave up a home run.

HeÃ¢â‚¬â„¢s shown flashes of the ability to put it all together this season, especially in some of his early relief appearances, but thereÃ¢â‚¬â„¢s something not clicking completely in his mechanics. I think heÃ¢â‚¬â„¢ll easily figure it out in Louisville, where heÃ¢â‚¬â„¢s absolutely dominated in the past, and should be able to come back up with those fixed mechanics and get back on track. IÃ¢â‚¬â„¢m not sure if heÃ¢â‚¬â„¢ll be given an opportunity to start once heÃ¢â‚¬â„¢s back, but he should be a valuable piece once he figures out his command.

By no fault of his own, Amir Garrett was the second young Reds pitcher demoted during the week. If I was Garrett, IÃ¢â‚¬â„¢d be furious. HeÃ¢â‚¬â„¢s done nothing but compete for the team this season, and has put up some pretty good results, including a few straight up dominant innings.

The front office has said this is all about saving innings, which could be partly true. ItÃ¢â‚¬â„¢s most likely more about service time, which is a shrewd move by a front office that needs to be making shrewd moves. Current day Jordan hates this move, but itÃ¢â‚¬â„¢s likely 2021 Jordan loves this move.

In a lineup of guys who are Ã¢â‚¬ËœonÃ¢â‚¬â„¢, it’s been the Reds catchers that have been Ã¢â‚¬ËœoffÃ¢â‚¬â„¢. The trio of Devin Mesoraco, Tucker Barnhart and Stuart Turner have gone a combined 3-for-33 over the last week, with three walks and four strikeouts. Mesoraco did have a heartwarming home run over that span, but for the most part things have not been looking good offensively.

Defensively things have been a little better. Tucker leads the league in Defensive Runs Saved with 5, and Mesoraco already has 2 since his recent activation. The bad news here is that Stuart Turner has been a below average defensive catcher, and flat out bad on the offensive side of the ball. He certainly isnÃ¢â‚¬â„¢t making the teamÃ¢â‚¬â„¢s decision to ride with three catchers look like a no brainer, at least for this season. It will be interesting to keep tabs on this situation, and if Turner can improve behind the plate as his rookie season moves along.

Dishonorable mentions: None. Maybe Blake Wood? This last week has been awesome!

WhoÃ¢â‚¬â„¢s on your Three Up and Three Down lists? Let me know in the comments!