There exists a malady known as Ã¢â‚¬Å“refeeding syndrome,Ã¢â‚¬Â in which a starving person experiences further physical distress after suddenly receiving nutrients. In other words, you can die from eating too much after eating too little.

Watching a person in a Darth Vader costume trail through the festival ramps of Great American Ball Park this weekend surged more Star Wars into my system than I have previously known. I type this while looking at a framed ink drawing of Young, Hot Obi-Wan Kenobi. You see, I was starving for Star Wars for far too long, and the sight of tee shirts bearing Stormtrooper helmets fused over a Reds logo is a protein mixture far too rich.

We now live in a world in which our Officially Licensed Major League Baseball teams have swirled their copyrights, Goober Grape-style, into those of the entire Star Wars universe. People were photoshopping Sith robes onto opposing players before the hugely general audience which comprises your general weekend mid-market ballgame without a thought as to whether the majority of the crowd would get the reference. Ã‚Â And this went on for an entire weekend. 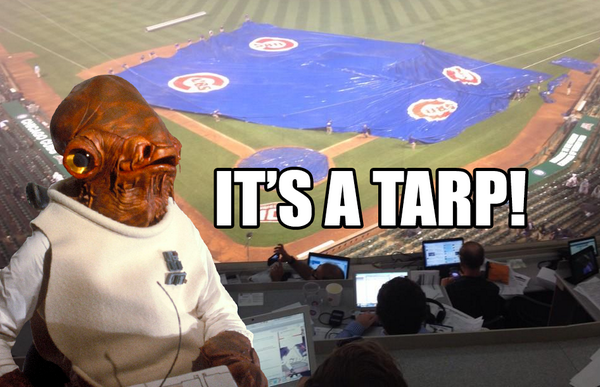 It has come to this.

I want to complain about this, somehow, (becauseÃ¢â‚¬Â¦old) but I canÃ¢â‚¬â„¢t. How can a Star Wars fan complain that thereÃ¢â‚¬â„¢s too much Star Wars? We can point to the prequels as evidence of the dangers of actually receiving what one might wish for, but in a way I wonder if this is how Cavs fans and Cubs fans might feel, post-championship. Bandwagon Cam stirred up something of a kerfluffle amongst Cubs fans, who are perhaps sensitive to those heaping into Wrigley when they were nowhere be seen for the past century or so.

This is a problemÃ¢â‚¬â€believe it or notÃ¢â‚¬â€we Reds faithful may experience soon. This team is a young team, a coltish one staggering around the barn just after birth, sometimes looking alertly to the sunlight and sometimes staggering back into the straw. Those of us who brazened out this particularly potholish era in Reds history might feel tempted to brush aside those who suddenly wish to sport a Votto jersey. Your suffering is not akin our suffering. Now, with a great infusion of new blood to come, our systems may not adjust well.

But let them climb aboard the landspeeder. There is room and Underoos for all. You’ve had your Todd Frazier Home Run Derby victories and your Homer Bailey no-hitters. Do not force others to starve in order to enjoy the bounty.