There’s been a lot of Billy Hamilton news out of the Reds camp the past few days. First, the Bengals drafted speedster John Ross, prompting a Cincinnati newscaster to make this video:

Then, Hamilton became the fourth-fastest player to 200 steals with his swiped bag on Thursday, trailing only Vince Coleman, Tim Raines, and Ricky Henderson.

AND THEN, Hamilton challenged Ross to a race, setting the distance at 40 yards and the prize money aside for charity. Billy the Kid is certainly up to his normal speedster ways, but it seems as if he’s put them into overdrive.

For our segment this week then, we’re going to do another Choose Your own Adventure to determine: Who is the fastest Red you could beat in a race?

Okay, you guys know the drill by now, but if for some reason you’ve forgotten, you have:

Easy peasy, nothing to it.

Question 2: How many round of the NFL Draft did you watch?

Question 4: Hypothetically, let’s say that Zack Cozart and Aaron Judge pull some sort of Freaky Friday stunt and switch bodies so that Aaron Judge has to play short stop thinking that he’s still aÃ‚Â 6’7″ behemoth but really he’s in a scrappy Cozart body and Zack Cozart plays the outfield like the second coming of Brett Gardner but looks like the second coming of Andre the Giant. Would you rather…?

Question 5: Gift Ngoepe made his Major League debut this week as the first African-born player to reach this level of play. Watching this video, what do you feel?

Of all the base coaches the Reds have had over the years, Billy Hatcher has been my favorite. Which is not to take away from Mark Berry who is the only other base coach I can remember the name of at the moment, it just means that Billy Hatcher has done his job for the Reds to such an exceptional degree that I am now a fan with a favorite base coach.

That said, it brings me so much pain to have to bring Hatcher before the Kangaroo Court this week. I really, really wanted to fine anyone else, but when the boss man says that Hatcher deserves a fine, then he must deserve a fine.

Offense:Ã‚Â Hatcher turned his back to his charge (Eugenio Suarez) after a walk loaded the bases. Yadier Molina, the savvy catcher that he is as much as that phrase hurts me, sneaked a bullet down the line to nab Suarez out at third. Bases loaded two outs went to inning over, Reds in the hole.

Fine:Ã‚Â This punishment is probably more sadistic than warranted, but as a result of his inattention, Hatcher must wear a Yadier Molina jersey in the dugout the next time the Reds play the Cardinals. After the game, Suarez must bequeath the jersey to Molina as a sign of respect. If he wants to tap Yadi’sÃ‚Â shinguards at the same time though, I won’t stop him.

Fantasy Baseball:Ã‚Â Narrowly eeked out a win last week, 531-525, despite forgetting to put Dallas Keuchel in the lineup for his 7.2 inning, 3 H, 9 K effort. The good guys are 2-2 though, sitting squarely at the intersection of potentially competing and selling everyone for prospects. Dynasty baseball is hard people.

Authorial Views:Ã‚Â The day has comeÃ¢â‚¬â€I have been passed for sixth. And not just by one other enterprising writer, but by two, with Jim Walker sprinting ahead as well. But it’s a long season and I will not give up faith. Chad, I will catch you. Watch me do it. 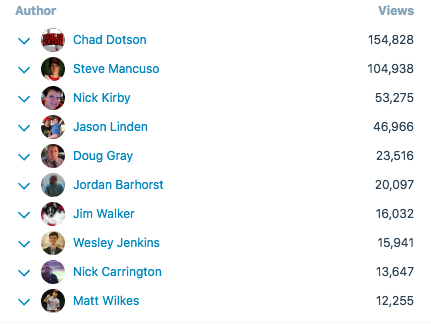 8-11 points: Michael LorenzenÃ‚Â Ã¢â‚¬â€Ã‚Â You’re deceptively quick in that, no one expects you to even know how to run, but you can put distance between yourself and the third basemen pretty easily. No one’s going to ask you to steal a base per se, but you’ll give yourself the green light every once in a while.

12-15 points:Ã‚Â Eugenio Suarez Ã¢â‚¬â€ Hold up, stay on the bag. Just because coach isn’t looking doesn’t mean you’re a speedster now. Yeah, you can outrun Devin Mesoraco but my turtle outran Devin Mesoraco the other day.

16-20 points: Devin MesoracoÃ‚Â Ã¢â‚¬â€ Oh buddy. Running just isn’t your thing. You grew up in a world that let catchers have automatic pinch runners so that they could put their gear on. You waddle just a little bit but that’s okay as long as you don’t try to race anyone. Please, please just leave John Ross alone.