Over the years, the Reds have been pretty good at signing their most talented players to team-friendly deals early on in their careers and, for better or worse, locking up those players for an extended period of time. ItÃ¢â‚¬â„¢s a necessary step that the Reds and other small market teams need to take in order to keep talent on the team. There are many examples of this working well: Johnny Cueto, Joey Votto, Brandon Phillips, and Jay Bruce all provided (or will probably provide, in VottoÃ¢â‚¬â„¢s case) play that had value which exceeded the amount of money the Reds paid that player. There are also cases that didnÃ¢â‚¬â„¢t work out so well – most notably, the Homer Bailey and Devin Mesoraco contracts that seemingly injured both of them upon signing their names.

The fact is, with this kind of contract, you either win or you lose. And itÃ¢â‚¬â„¢s almost always pretty clear which side of the fence you fall on after a handful of seasons. Unfortunately, these are the types of contracts the Reds are required to take on as a small market team. They canÃ¢â‚¬â„¢t afford to outbid the Yankees or the Dodgers or the Cubs in free agency, so they need to rely on building talent through the farm systems and signing those players to contracts before they hit Free Agency.

This kind of deal is becoming more and more rare as players and their agents have started to demand more and more money. In fact, on Monday it was reported that Cleveland Indians superstar shortstop Francisco Lindor turned down a contract worth $100 million. Lindor hasnÃ¢â‚¬â„¢t completely written off an extension with the Indians, but in a market that has seen the likes of Bryce Harper and Manny Machado opt to ride the wave of their significant draft signing bonuses until they are eligible to hit the Free Agent market, it wouldnÃ¢â‚¬â„¢t be a surprise if Lindor did the same.

So, what does this mean for the Reds? Well, for starters, the timing in which theyÃ¢â‚¬â„¢ll need to lock up their young players will need to be impeccable. The best timing, and the window in which the team can receive the most value, is to lock up a player after theyÃ¢â‚¬â„¢ve proven that they can be a reliable piece going forward, but before they price themselves out of a contract. Sounds tricky, right? Well, it is.

So, who should the Reds be looking to extend in the near future? IÃ¢â‚¬â„¢ve identified a few players that the team should seriously look at extending sometime before the start of the 2018 season. First on that list, and perhaps the most important, is third baseman Eugenio Suarez.

Now, proposing a long-term contract extension to Suarez at the beginning of the 2016 season would have seemed ludicrous. However, Suarez is off to a blistering start to the 2017 campaign, not only sporting some slick league-leading defense at third base, but also hammering everything he sees at the plate. And, as anyone who dives into the analytics can surmise, itÃ¢â‚¬â„¢s likely that this new production is closer to what we can expect out of Suarez going forward than what weÃ¢â‚¬â„¢ve seen from him in the past. Scott Strandberg at RotoGraphs wrote a very eye opening piece on Suarez earlier this week, explaining just what the Reds young third baseman seems to have changed in his approach in the offseason. Strandberg points to SuarezÃ¢â‚¬â„¢s heat maps, showing that heÃ¢â‚¬â„¢s started to completely lay off high pitches out of the zone, a pitch he had routinely chased in years past. This is leading not only to a higher walk rate, but a much better rate of solid contact. These two boosts combined have reflected across the rest of SuarezÃ¢â‚¬â„¢s game, improvoingÃ‚Â his wRC+ on the young season to an impressive 217. You should definitely go check out the article to read more, as itÃ¢â‚¬â„¢s some pretty riveting stuff.

So, Suarez is clearly breaking out, right? Seems like he falls perfectly into the window of being proven while still being young and affordable. So – whatÃ¢â‚¬â„¢s he worth?

Suarez wonÃ¢â‚¬â„¢t keep up the 217 wRC+ unless heÃ¢â‚¬â„¢s the best player to ever live. Even if we meet him at the halfway point between 217 and his career mark of 102 (160 wRC+), youÃ¢â‚¬â„¢re still looking at the third highest mark in baseball, behind Mike Trout (171 wRC+) and David Ortiz (163 wRC+) and just beating Joey Votto (158 wRC+), which is also unrealistic. Even with this break out, I think IÃ¢â‚¬â„¢d be hard pressed to say Eugenio Suarez is suddenly a better offensive player than Joey Votto, so letÃ¢â‚¬â„¢s temper it down a bit further.

Scanning the list of third baseman by wRC+ last season, sitting pretty at #4 is Kyle Seager. Seager is an interesting comp for Suarez for multiple reasons. Seager signed his extension a month after his 26th birthday, right around the same age Suarez would be in this hypothetical window weÃ¢â‚¬â„¢re talking about. SeagerÃ¢â‚¬â„¢s stat line in 2014 isnÃ¢â‚¬â„¢t far off from what we might be able to expect out of Suarez this season, given expected regression:

Given what weÃ¢â‚¬â„¢ve analyzed about EugenioÃ¢â‚¬â„¢s new approach at the plate, his B% and K% numbers going forward will likely be closer to what they currently are than what they were in 2016, before his adjustment. Like dominoes, all of the numbers should fall in line, and some sort of amalgamation of the 2014 stat line for Seager and the 2016 line from Ramirez looks mightily similar to what we could expect out of a post-regression 2017 Suarez. Somewhere around a .290/.345/.460 line doesnÃ¢â‚¬â„¢t sound out of the question at all, and a 125 wRC+ would have made him the 7th most valuable offensive third baseman in 2016, right between Manny Machado (129 wRC+) and Nolan Arenado (124 wRC+). Again, not so improbable that itÃ¢â‚¬â„¢s ridiculous, especially after watching him early this season. On top of all of that, if Suarez continues to play third base at his Gold Glove rate, SeagerÃ¢â‚¬â„¢s 2015 Def of 12.9 isnÃ¢â‚¬â„¢t absurd to think about either. He should definitely surpass Jose Ramirez, who is considered an average fielder at best.
A new contender has entered the ring! YouÃ¢â‚¬â„¢ll see another name in that chart above: Jose Ramirez. If Kyle Seager is Eugenio SuarezÃ¢â‚¬â„¢s ceiling, Jose Ramirez should be seen as a step down from that. A similar player to Suarez prior to 2016, Ramirez broke out for the Cleveland Indians in his age-23 season, helping to spark a deep playoff run for the Tribe. He also received a contract extension in the offseason, adding to his interest for this piece specifically.

LetÃ¢â‚¬â„¢s dive a little deeper into the Seager comparison. The difference here, which could end up being advantageous for the Reds, is that Seager had seasons of 3.6 and 4.0 fWAR before his 5.4 fWAR 2014, after which he ultimately signed his extension. SuarezÃ¢â‚¬â„¢s history is a bit different – only mustering 0.6 and 1.7 in the two seasons before 2017. HeÃ¢â‚¬â„¢s already accrued 1.6 fWAR in 2017, so things are definitely looking up, but thereÃ¢â‚¬â„¢s no denying the past success just isnÃ¢â‚¬â„¢t there for Suarez like it was for Seager.

When comparing his past to Jose Ramirez, however, things get pretty eerily similar. Through two big league seasons before his breakout, in which he averaged 310 plate appearances, Ramirez put up 2.5 fWAR. Pretty dang average for a young, unproven player. Suarez, by comparison, was able to post 2.3 fWAR in the two seasons leading up to his presumptive 2017 breakout season. ItÃ¢â‚¬â„¢s important to note that Suarez did have a pretty okay rookie year in Detroit prior to those two seasons, putting up 0.9 fWAR in 2014, bringing his total pre-breakout fWAR to 3.2, but adding a year to the journey when compared to Jose Ramirez. 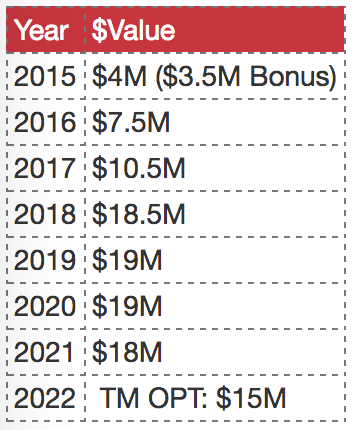 Now, thatÃ¢â‚¬â„¢s not Joey Votto money, but for a team like the Reds, itÃ¢â‚¬â„¢s a substantial chunk that would not be given away without a thought. ThatÃ¢â‚¬â„¢s probably close to 15% of a successful Cincinnati Reds payroll in 2018-2020, provided payroll gets a boost when the team is competitive again.

ItÃ¢â‚¬â„¢s also a far-cry from what Jose Ramirez was given with the Indians: a five year, $26 million contract extension, locking him up through 2021, with two team options for 2022 and 2023: 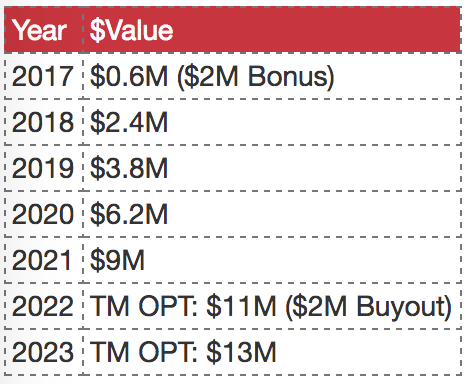 Much more affordable, if youÃ¢â‚¬â„¢re the Reds. The Indians did exactly what teams should be trying to do in this situation – they saw something they liked in a kidÃ¢â‚¬â„¢s first breakout year, and instead of trying to make sure he can repeat it, they locked him up immediately. ItÃ¢â‚¬â„¢s risky, but Cleveland is a believer in Jose Ramirez.

Eugenio Suarez will likely argue heÃ¢â‚¬â„¢s worth Kyle Seager money. The Reds probably want to pay him closer to Jose Ramirez money. Like all money disputes in baseball, any agreed-upon deal will likely land somewhere in the middle. HereÃ¢â‚¬â„¢s a deal I think works out great for both the Reds and Eugenio Suarez: 5 years, $55 million, with two team options at the end: 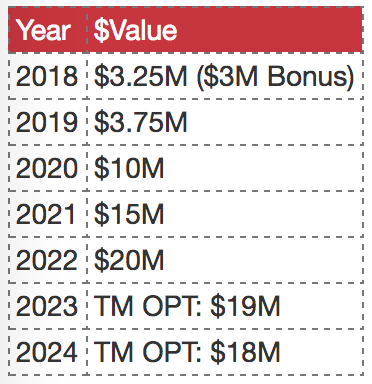 This contract is set up so that if Suarez isnÃ¢â‚¬â„¢t as good as we think he could be, the Reds can opt out after his age 30 season. If Suarez is still solidly in his prime at 30, he essentially begins two one-year contracts for $19 and $18 million, respectively. At the same time, it gives Suarez an immediate bump in pay, and gradually increases over the years. This contract is also very trade-friendly: Unlike VottoÃ¢â‚¬â„¢s contract, it wouldnÃ¢â‚¬â„¢t be impossible for another team to take on some or all of the salary in any given season. ItÃ¢â‚¬â„¢s very similar to the contracts the Cardinals gave to Carlos Martinez, the Royals gave to Sal Perez, and the Indians gave to Jason Kipnis. The only question here is whether or not the team thinks Eugenio Suarez would be worth the money.

ItÃ¢â‚¬â„¢s too early in 2017 to draw any conclusions about the Jose Ramirez deal. However, the Seattle Mariners seem to have done a pretty good job with SeagerÃ¢â‚¬â„¢s contract. Since signing, heÃ¢â‚¬â„¢s had seasons of 3.9 and a career-high 5.5 fWAR in 2016. Since 2012, only six other position players have been more valuable, and his UZR and DRS continue to be top-tier. The Mariners took a chance on a young player, perhaps mis-timing the extension slightly, but all-in-all, are getting supreme value as a return on their investment.

Suarez has an interesting outlook in Cincinnati. Nick Senzel, the clubÃ¢â‚¬â„¢s #1 prospect by just about anyoneÃ¢â‚¬â„¢s measure, also plays third base, and figures to be playing in Great American Ballpark sooner rather than later. But does that mean that you automatically write off a player like Eugenio Suarez? Baseball is a game of failure. The odds are extremely high that Nick Senzel, or any other prospect for that matter, never pans out. Eugenio Suarez has proven that not only can he play day-in and day-out, but that heÃ¢â‚¬â„¢s able to make adjustments to make himself fail a little less often. ThatÃ¢â‚¬â„¢s exactly the type of player that small market teams like the Cincinnati Reds should look to lock up for an extended period of time.