Everybody back off for 900 words, because I’m about to get old up in here.

Watch this video. Crank your device volume. Ã‚Â Like, John Cusack in front of a Chevy Malibu levels.

Do you hear that?

Yes, Obnoxious Troll in the Back, it’s the inexorableÃ‚Â noise of the Reds about to blow it against the Cubs in the 9th inning. Ã‚Â I mean before that– right here, right in this moment, with the ball park lights gleaming like the sun off the championship pennant paintings. What do you hear?

You hear… people. And even players. They’re cheering. They’re not just cheering–they are, as one, hoisting a large, spontaneous, very un-2017, unironic “Yaaaaaaaaaaaaay!” For the pitcher has just popped a double at home against the reigning World Champions, who just happen to be in the division, in a game in which first place is at stake. And so all God’s good Reds fans goÃ‚Â “Yaaaaaaaaaaaaay!”

I sit here typing this in my bare feet on a screen the size of a good book as my umbilicus-to-the-planet charges beside me. My cell phone currently holds the phone numbers of pretty much everyone I’ve ever met, a snapshot of a cookie recipe, and notes for my next book. It allows me to instantaneously call forth the glove size of the last left-handed pitcher to throw on a Reds farm team on a Saturday in August. I like me my technology. I like me my fireworks and my old-timey organ. I enjoy the sight of a giant Zack Cozart face looming Easter-Island like over the opposition dugout as much as the next person. I do not like sitting in a Great American Ball Park crowd of 10,000 and hearing Harry Belafonte scream “DAY-O” at Kentucky for no apparent reason.

The ricochet through entire empty sections on these cold and uncertain April nights makes it worse, but I was also present at the rather well-attended All Star Game in 2015 and came to the same conclusion: Ã‚Â Shut up. Ã‚Â Shut up, shut up, shut.Ã‚Â up.Ã‚Â with the canned screaming.

Perhaps I’m more sensitive to canned encouragement because I embedded for a year with Ohio State’s Marching Band, which practiced very hard and worked very long to…sit motionless in the stands while the Athletic Department blasted clips of pre-recorded pop music, Ã‚Â on the theoryÃ‚Â that 192 college students with brass instruments and drums don’t generate quite enough noise on their own. Ã‚Â The fans did not appreciate this. Standing beneath the student section, hearing the crowd response of exactly nothing, neither did I.

This is not a horror exclusive to Ohio Stadium or GAPB. Ã‚Â Loudspeaker abuse was present at that august concrete doughnut, Riverfront Stadium, largely in the form of the pixellated adventures of a sliding smoked sausageÃ‚Â Ã‚Â Ã‚Â (we dealt only in reality, in those blue-seat days there onÃ‚Â Mehring Way): 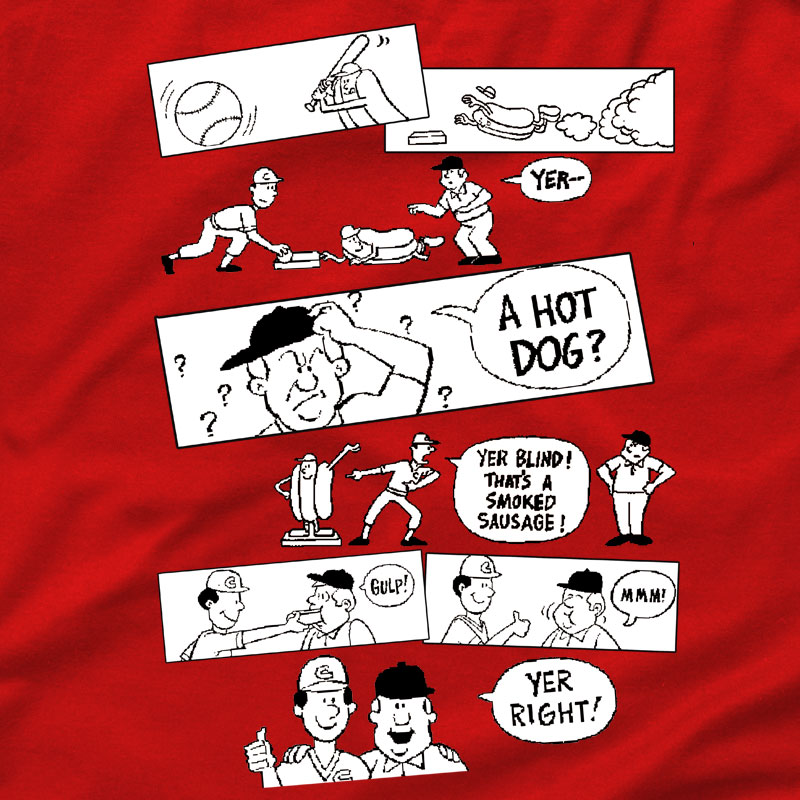 The penultimate panel of this complex plot was accompanied by an extremely loud, extremely prolonged “MMMMMMMMMMMMMMMM!” I was, at the age of five, acutely chagrined by this: Did the Reds not trust their own to know that smoked sausages were delicious? Must the point be so crudely made? Why must we all suffer so?

Maybe my personality is to blame for the assuming duck-and-cover position beneath the beer taps when it’s time for Fun With Our Many Large Loud Flashing Rectangles. On the Meyer-Briggs personality test, I score as an HSP-INFP, which means that I do not like loud noises not self-created, attending to detail, conflict, itchy clothes, structured tasks, weird food, group projects (I am building myself quite the job application here), tambourines at Mass, sudden upset, disturbing images or situations (perhaps this is why I have utterly shut down on the Bengals), external disruptions, or people.

And we listen, for the game replies, always a part of the conversation. The bat cracks and we look sharply as one to the plate; the ball smacks into the glove and we raise our glasses to the general direction of the mound.

We stop talking and listening, however, when forcibly silenced byÃ‚Â the likes of Miley Cyrus, Ã‚Â largely because we’re looking around wondering who and what on earth we’ve offended to rain Miley Cyrus down upon us hereÃ‚Â on this warm, soft summer evening with the river sliding by and the moon up above.

Hush, dear Reds, and let us speak to you– just as you speak to us.