A season ago, the Cubs lead the MLB in walks with 656 on their way to winning the World Series. Pitchers simply have to throw strikes to the Cubs, or they will take walks all day long. Pitchers cannot get by with tempting pitches outside of the zone very often.

The first seven pitches that Cody Reed pitched this afternoon were balls. He ended up walking the first two batters, and then gave up a three run home run to Anthony Rizzo. It was Rizzo’s second three-run home run against the Reds in about 15 hours.

The Reds offense fought back in the bottom of the first. Joey Votto answered Rizzo’s three run home run with one of his own. Eugenio Suarez followed that up with a solo home run later in the inning, and the Reds had a 4-3 lead.

Cody Reed walked two more batters in the second inning, and with two outs gave up a grand slam to Cubs catcher Wilson Contreras. It was 7-4 Cubs, and they never looked back. Reed only lasted two innings in his first start of the season, giving up five walks and seven earned runs. Walks always haunt, but even more against the Chicago Cubs. 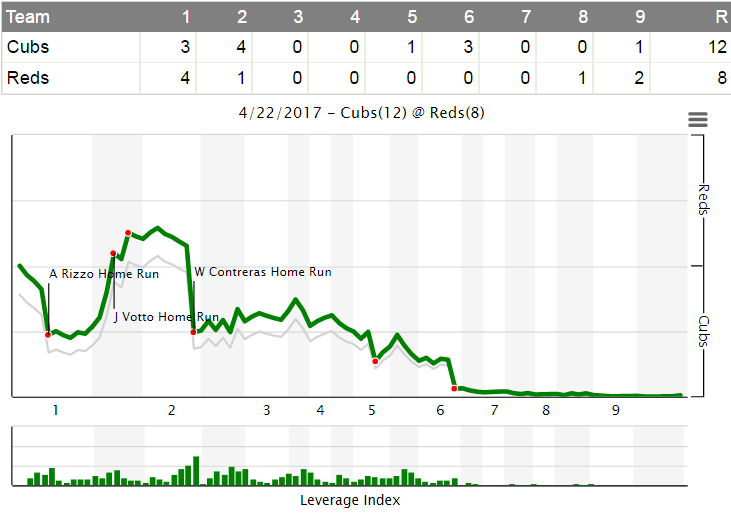 According to FangraphsÃ‚Â WPA statisticÃ‚Â (winning percentage added), the most important play of the game was Cody Reed allowing a grand slamÃ‚Â to Wilson Contreras with 2 outs in the second inning, giving the Cubs a 7-4 lead.Ã‚Â That play decreased the Reds chances of winning by 33.0% (from 57.6% to 24.6%).

Other important plays (+/- indicates how much each play increased/decreased the Reds chances of winning):

Joey Votto hit a three-run bomb in the first inning, and then drove in two more runs later in the game.Ã‚Â HeÃ‚Â is now on pace for career high 54 home runs and 126 runs batted in.Ã‚Â Votto hit 2 home runs in the entire month of April last season. He already has 6 this year, and the Reds still have 7 games left. 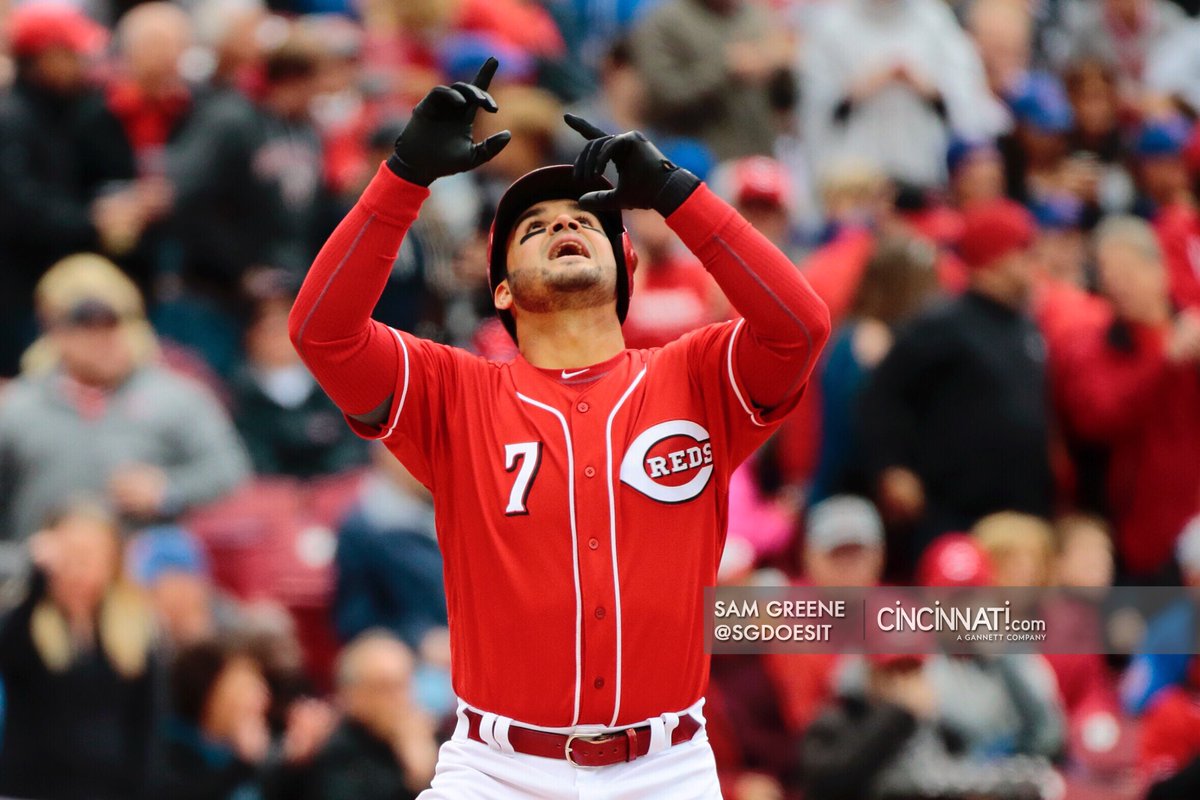 Eugenio SuÃƒÂ¡rez (@Reds) with his second career 2 HR game (first was at Rockies on June 2, 2016) pic.twitter.com/OTd3JnFoHH

Jose PerazaÃ‚Â had a two hit day at the top of the lineup.

Lisalverto BonillaÃ‚Â made his Reds debut, and had his first big league appearance since 2014. Bonilla did a really nice job getting through five innings in relief, and importantly saving the Reds overused-of-late bullpen. Bonilla was far from perfect, as he did walk three batters and serve up a three run bomb. But he did what was needed of him. You could see some of the upside with Bonilla, as he did strike out 5 batters. All five of his strikeouts came on off-speed pitches, including two on 92 MPH changeups!

TheÃ‚Â Reds offenseÃ‚Â had a great day, scoring 8 runs and collecting 14 hits. They also made a late push in the 9th inning, which at least made Cubs closer Wade Davis have to start warming up.

Cody ReedÃ‚Â was pretty terrible this afternoon. The first 7 pitches of the game were balls, and he ended up walking the first two batters. He then gave up a home run to Rizzo, and it was quickly 3-0. The home run to Rizzo happens, he is a great hitter. But what is inexcusable is walking back-to-back batters against any team, especially the incredibly patient Cubs. The Reds fought back for Reed, and got him a 4-3 lead. What did Reed do to oblige them? He walked two batters in the next inning which lead to a grand slam.

Reed hasn’t struggled with command for most of his career. He did give up a lot of home runs last year. My best guess is that he was too worried about giving up the long ball that he tried to nibble to much. You have to be smarter than that against the Cubs. They aren’t going to fall for bad pitches often. This is a learning experience for Reed. Hopefully he can get better from it.

While Cody warms up, Schwarber, Bryant, Rizzo, and Russell step out of dugout and casually swing bats. #intimidation? #cubs pic.twitter.com/ZzGSjWKwkA

Jason HeywardÃ‚Â had a big sliding catch in the 4th inning. He doubled up Suarez on first base. If that ball gets past him, it would have been a one run game.

Scooter GennettÃ‚Â badly misplayed a fly ball that cost the Reds a run in the 5th inning. It’s almost like his isn’t a rightfielder?

The last hurler with more than 4 in a career? Dontrelle Willis (6). pic.twitter.com/S1xrjmAM7I

I don’t fault Bryan Price or Michael Lorenzen for blowing the game last night. Those kind of things happen, and Rizzo’s home run was about as cheap as it gets. That said, yesterday’s heartbreaking loss just makes today’s loss even worse. The Reds margin of error against the Cubs is so slim. There will be days the Cubs go nuts like today. The Reds can’t afford blowing three run leads in the 9th inning on the other days.

Scooter Gennett‘s bad misplay (mentioned above) was not an error (which is technically the right call). That is why you should put zero stock into a position players fielding ability based on errors, and also why you should use caution with earned run average for pitchers.