A few days ago, Michael Baumann wrote an article for the Ringer titled “Even in America, Eric Thames is God” that includes a number of perfect sentences but none more perfect than this one: “Thames is absolutely shredded. HeÃ¢â‚¬â„¢s got thighs for forearms and pecs the size of JosÃƒÂ© AltuveÃ¢â‚¬â„¢s head. He looks like the kind of guy people befriend just so they can ask him to help them move.”

On some level, Baumann is right in that Thames does resemble my friend Andres who helped me move into my apartment this year. Andres, much like Thames, has thighs and pecs that maybe aren’t the size of Jose Altuve’s head, but I’ve also never seen Jose Altuve’s head so who am I to judge. I imagine though that Baumann was implying that Eric Thames would actually be an asset when you are moving into a new apartment, something Andres absolutely was not. To give context, the one class Andres ever dropped in college was physical fitness.

Regardless, Baumann’s analysis of Thames made me think at what point is someone simply too shreddedÃ‚Â to play the game of baseball? Unlike other sports, notably football, rugby, and basketball, baseball has no entry requirement of being a terrifyingly strong human. Think, for instance, about Bartolo Colon or Billy Hamilton, neither player I associate with peak physical stature. However, for every Colon and Hamilton, there are players like Thames and Yoenis Cespedes and Yasiel Puig.

Which brings us to this week’s new segment: I Miss the Old Drake

Obviously, the ideal baseball player is one who makes the Hall of Fame, which narrows our investigation to a pool of 249 former Major League players. (There are also 10 umpires, 23 managers and 35 executives in the Hall.) Recognizing that different positions require different body types, the question should be further broken down by position, so I went through each position and separated by short or tall and thin, near average, or hefty. The dividing line for height was six foot and above as tall, below as short, and the dividing line for weight was below 170 pounds as thin, above 210 as hefty, and between as near average (the average MLB player has stayed between 170 and 190 since 1880).

Is any of this remotely scientific? No, not at all but it does make for a good thought experiment on if the Reds have an ideal roster.

Catcher (9 tall, 8 short / 2 thin, 9 average, 6 hefty):Ã‚Â By Hall of Fame standards, the best catcher will be around 6 feet tall and on the bulkier side, perhaps around 200 pounds. Devin Mesoraco hits the right height at 6’1, but far outweighs Cooperstown at 230 pounds. Tucker Barnhart meanwhile sits at 5’11 and 192 lbs, so maybe Meso should just take his time on the DL?

First Baseman (20 tall, 3 short / 0 thin, 17 average, 6 hefty):Ã‚Â Exactly according to stereotype, the best first basemen are tall and large. Speaking of, my high school team’s first baseman was a cancer survivor who came back at life with a vengeance and resembled a small truck his senior year. Once, he blocked the baseline on a ground ball and the runner hit him at full speed, but James (that was the first baseman’s name) budged not an inch while the runner flew off the ground and completed a couple of helicopter spins before landing somewhat safely on his back. No one messed with James. Also, Joey Votto is 6’2, 220, confirming what everyone already knew: He belongs in the Hall.

Second Baseman (6 tall, 15 short / 6 thin, 15 average, 0 hefty):Ã‚Â Second basemen are short and light, again big surprise. Jose Peraza fits the bill, but he might want to walk a bit more if the Hall is in his future.

Third Basemen (8 tall, 8 short / 1 thin, 15 average, 0 hefty):Ã‚Â The only result that even moderately surprised me, third basemen are not supposed to be large lumbering dudes. Pablo Sandoval and Alex Rodriguez be gone, give me my 5’11, 213 lbs Eugenio Suarez (but actually maybe drop a couple of pounds please).

Shortstop (4 tall, 20 short / 11 thin, 13 average, 0 hefty):Ã‚Â True to their name, shortstops are indeed short and somehow thinner than second basemen. It’s like the ideal middle infield are just two Roadrunners where one has an abnormally strong arm.

Left Fielder (11 tall, 11 short / 2 thin, 19 average, 1 hefty):Ã‚Â Once again, a left fielder is the definition of average. No Yoenis Cespedes, no Starling Marte, just average. Kind of like Adam Duvall. An average guy who happens to hit dingers fairly often.

Center Fielder (8 tall, 16 short / 4 thin, 19 average, 1 hefty):Ã‚Â Stereotypically short and speedy, Hall of Fame center fielders do exactly what is expected of them. At 6’0 and 160 pounds, Billy Hamilton fits the mold perfectly, if not a little bit on the tall side.

Pitcher (???????):Ã‚Â To be honest, when I saw that there were 77 pitchers in the Hall of Fame, I gave up on this exercise. Nothing from the above is even remotely informational and comparing Randy Johnson to Greg Maddux won’t add any more clarity. Let’s just hope that Amir Garrett fits whatever trend might’ve emerged and we can all just rest easy tonight.

This week, two different cases will be coming in front of the Kangaroo Court, both already resolved so their efficacy is long past. The two plaintiffs: Jose Peraza and the Reds offense.

Offense(s):Ã‚Â On April 18, 2017, one young Jose Peraza drew his first walk of the season. Before that walk, Peraza had come to the plate 53 times, seeing a 3-0 count just once before the fateful walk. While in any normal situation, Peraza would be fined for his inability to contain his swinging hands, he was able to contain them this week, so I feel bad fining him.

As for the Reds offense,Ã‚Â putting up 9 runs behind Bronson Arroyo and a big goose egg behind Amir Garrett sounds blasphemous. Consider that Arroyo did the minimum of serviceableÃ¢â‚¬â€3 runs over 5.0 inningsÃ¢â‚¬â€and Garrett excelledÃ¢â‚¬â€12 Ks in 7.0 innings. Also factor in that Arroyo took his first win since 2014 for the match and Garrett his first major league loss for his and you have a nice synopsis of why the win/loss stat is utterly useless.

Fines:Ã‚Â Neither the offense nor Peraza should be fined for their offenses per se because one is a good case study against a terrible state and the other has already atoned for his sins, but that isn’t how this section works. Therefore, the entire Reds offense must write a one-page book report onÃ‚Â Moneyball, and Jose Peraza must pull double duty writing a review of the film as well.

Fantasy Baseball:Ã‚Â The second match in this season-long slog saw a 521-517 win complete with a stunning comeback on the last day of competition. Bartolo Colon came through with a 33-point start, proving once again that the Braves pitcher is not the hero we deserve, but the one my fantasy team needs.

Authorial Views:Ã‚Â I feel like the Falcons, with a 28-3 lead just as the Patriots are about to score. Still in sixth but slipping faster and faster. 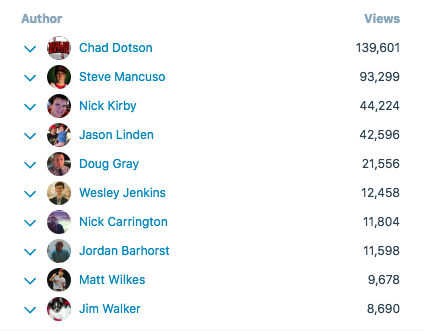