The Reds offense was dominated for a second consecutive night by a mediocre Orioles starting pitcher. The Reds collected just two hits against Wade Miley over eight innings.

The Reds pitching on the other hand was great for a second straight night, despite coming in a losing effort. Scott Feldman allowed just one run over seven innings, and Iglesias was dominant in the 8th and 9th innings. It was however a walk in the top of the 10th inning by Blake Wood that proved to be the difference in this game.

The Reds have now dropped back to back series, and lost 5 of 7. The Reds are still in first place, but they would fall to second place if they lose tomorrow. The Reds are now up 0.5 games on the idle Cubs, and 1.0 on the Brewers as I type this (they lead the Cardinals 5-4 in the 6th inning). 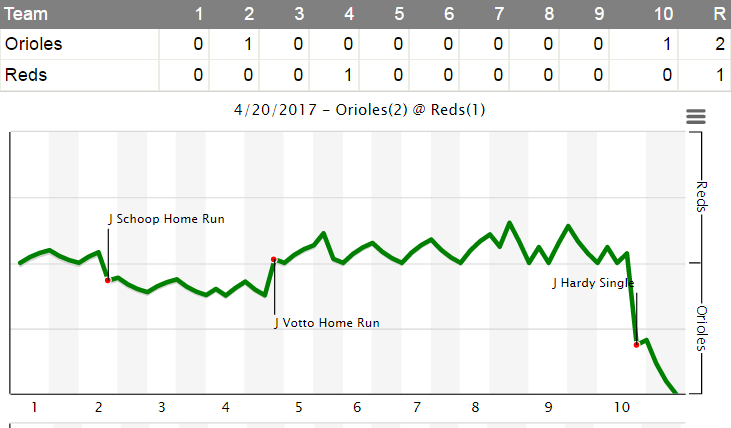 According to FangraphsÃ‚Â WPA statisticÃ‚Â (winning percentage added), the most important play of the game was Blake Wood allowing an RBI single to J.J. Hardy with 2 outs in the top of the 10th inning, giving the Orioles a 2-1 lead.Ã‚Â That play decreased the Reds chances of winning by 34.9% (from 53.6% to 18.6%). 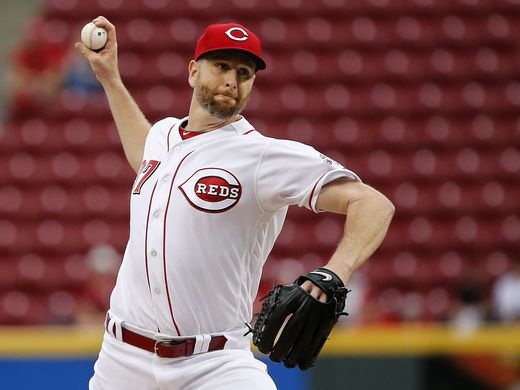 You guys still worried aboutÃ‚Â Joey Votto? Me neither. Votto hit his 5th home run of 2017, a 423 foot bomb over the Reds bullpen (VIDEO). Votto’s aggressive approach paid off here, as it came on a 2-0 pitch. Miley had a no-hitter going to that point too. Here is an interesting thought:

Votto through the first 16 games of the season:

Jose PerazaÃ‚Â made a really nice play defensively late in the game (VIDEO). He was playing just to the right of second base, and had to half-dive right behind second base. He threw a bullet to Votto. I’ll say it, for all the wizardry Brandon Phillips could do, he couldn’t make that throw today.

Walks will haunt.Ã‚Â Blake Wood walked a batter with 1 out in the 10th, and it proved to be the winning run.

TheÃ‚Â Reds offenseÃ‚Â was really hot to start the season. Not so much the last two nights. For a second consecutive night, the Reds were dominated by a mediocre Orioles SP.

Bryan PriceÃ‚Â using his closer in the 8th inning will never, ever get old. It’s like a breath of fresh air every-time it happens.

Jordan Barhorst hosted the very first edition of the RN 7th Inning Stretch Show! ICYMI, here is a link to the archive of the show. In the future, during the seventh inning of the last game in every series, one of the staff here at the blog will go live on Periscope.

I have to be honest, I really probably shouldn’t have signed up for a recap with a Cavs playoff game on. I didn’t give the Reds game or this recap my 100% effort….but how about the Cavs? 26 comeback on the road? Tied for the largest comeback in NBA Playoff history? That’s fun.