Three undeniable truths that I never thought I would have the fortune — much less ability — to utter:

What do these three undeniable truths have in common? Well, nothing for one, but also they all inexplicably tie into an article I’ve been working on for the past two weeks and was published this past Monday. The piece, a feature story on Division III reliever and co-founder of Cespedes Family BBQ Jake Mintz, shows how Mintz came to live a double life in baseball, moonlighting as a writer, podcaster, and commentator while riding the bench in real life.

I realize that probably did nothing to explain why the three truths above are related, so let me explain further. Lionel Messi, Scooter Gennett, and the Reds are all currently moonlighting, much like Jake Mintz, as better versions of themselves. The Reds are a team that wins games. Scooter is Joey Votto. And Lionel Messi is Lionel Messi but on a team that can actually win a trophy (FC Barcelona).

For the second installment of your Regularly Scheduled Rain Delay, I’m going to introduce a new segment (heh) called Moonlighters, where Reds players are given a hypothetical second job that doesn’t require swinging a bat at or throwing a small white ball. For example, I could say in the offseason, Joey Votto is a garbageman because he’s playing like trash. But that would be cruel and unusual because Joey Votto is not trash, he’s simply not playing like himself. So maybe instead of a garbageman, Joey Votto is a dentist. Sometimes he just has an offday and pokes someone in the gum, but he’ll choke up on the bat and own that you probably should start flossing more and he did nothing wrong.

Devin Mesoraco Ã¢â‚¬â€ Ever since high school, Mesoraco has filled in for the eternally frail and sickly Punxsutawney Phil when the gopher has been too under the weather to fill his season-deciding duties. Peeping his deep brown eyes out from under his catcher’s mask each February, it’s only a shame that Mesoraco has seen his shadow andÃ‚Â decided “six more months of injury” each of the past three seasons.

Billy Hamilton Ã¢â‚¬â€ Prior to taking over as Cozart’s hype man, Hamilton manned the WHAM 97.5 radio station, playing slow jamz only. Taking the air only for the evening rush hour on Thursday nights, Hamilton was known for his signature sign-off: “sometimes you gotta take it slow rounding third and heading for home.”

ScooterÃ‚Â GennettÃ‚Â Ã¢â‚¬â€ When not impersonating (body snatching?) Joey Votto on the field, Scooter Gennett reenacts Civil War battles off of it. Perpetually playing a private in the 4th Ohio Infantry, Gennett has kept a meticulous journal of his activities.

[Journal] Day 11, Scooter Gennett era. Our leader's wooden club exploded but it led directly to yet another victory in yesterday's skirmish.

Inexplicably (or perhaps, quite explicably), Gennett solely refers to himself in the third person.

Bronson ArroyoÃ‚Â Ã¢â‚¬â€ Following his retirement from the sport of professional baseball, Arroyo joined a men’s league softball team that barnstorms around the country, occasionally playingÃ‚Â in Great American Ballpark every fifth day. If you want a blast of nostalgia, head on down to the riverfront and support a former Reds legend struggle to keep the glory days rolling right along.

Last week, plaintiff Scott Feldman got off fairly easy with only 24 phone calls for doing the one thing you can never do as an opening day pitcher. This week, superstar extraordinaire and dentist on the side Joey Votto must take the stand for not one, but two charges in the Kangaroo Court.

Offense(s):Ã‚Â Twice in the last week, Joey Votto has made a boneheaded play and the Reds have suffered (sort of) because of it. First, Votto attempted to steal third against the Cardinals last Friday, forgetting a) he is slow and b) it was a one-run game and c) despite being older than Abner Doubleday himself, Yadier Molina is one of the best defensive catchers in the game. Second, Votto neglected to tag up and score on a fly ball, which happens occasionally but also c’mon Joey. While no one is ever going to claim that baserunning is Joey’s specialty, when you’re hitting .171 like he is at the moment, it’s best not to compound your troubles.

Fantasy Baseball: The good guys lost their first matchup 607-592, but Dallas Keuchel put up 56 points all by his lonesome so that’s encouraging. Less encouraging is Tyler Naquin being sent to AAA today, meaning now one of my five outfielders has been deemed expendable by his real life team. I picked up Danny Espinosa to compensate.

Authorial Views:Ã‚Â I have maintained my sixth place standing, but Nick Carrington is making a mad dash for my territory. Meanwhile, Doug Gray has pulled away and Chad has become even more uncatchable than he was before. The climb to the top is looking bleak. 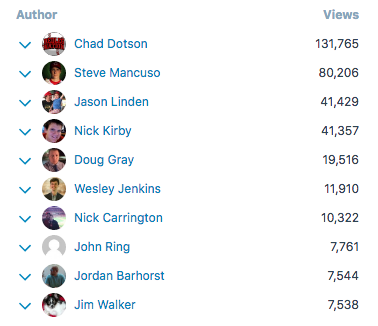