With analytics becoming more prevalent in baseball, the popularity of the save has diminished in recent years. The logic behind this is fairly simple: why save your best reliever for the very last inning when a turning point in the game may come in the sixth, seventh, or eighth inning? Yet, many managers still refuse to use their most talented bullpen armÃ‚Â anytimeÃ‚Â exceptÃ‚Â the ninth. Some have broken away from that trend over the last few seasons (most notably, Terry Francona and Joe MaddonÃ‚Â in last year’s World Series), but most still abide by the traditional way of managing.

On multiple occasions after he was hired in 2014, Reds manager Bryan Price expressed a desire to buck the trend and get more creative with his bullpen, namely with Aroldis Chapman. More often than not, though, that didn’t happen. His setup men continued to pitch the eighth, and his closer continued to pitch the ninth. If the team was losing by one or two, the closer didn’t pitch, sometimesÃ‚Â allowing a one- or two-run deficit become four or five.

In 2016, Price began showingÃ‚Â a bit more creativity than he previously had by allowing Michael Lorenzen and Raisel Iglesias — his two best relievers, by far — to pitch multiple inningsÃ‚Â in relief to maximize their value. Part of this stemmed from the fact that the rest of his bullpen was largely awful and he didn’t trust them, but it was a step in the right direction. After seeing the success teams had with a nontraditional approach in the postseason, the Reds manager pondered if it was realistic to utilize a bullpen like that for an entire season in a piece byÃ‚Â MLB.com’s Mark Sheldon:

“The only way that works is if you have multiple people who can do it,” Price said. “Every time you fire an Andrew Miller or a Raisel Iglesias for 2 2/3 innings, they’re not going to come back and do the same thing the next day, not in a 162-game season.”

This year, he does haveÃ‚Â multiple people who can do it, although some of his flexibility is due to having an eight- and nine-man bullpen, as well. Seven of his current relievers have previous starting experience (Lorenzen, Iglesias, Cody Reed, Robert Stephenson, Wandy Peralta, Barrett Astin, and Tony Cingrani),Ã‚Â affording PriceÃ‚Â the flexibility to use his relievers for multiple innings or in high-leverage situations when necessary. When the team is up big, he’s let Reed and Stephenson pitch multiple innings as they continue to get their feet wet in the major leagues. When the team is holding on to a tight lead, he’s deployed Lorenzen and Iglesias — and not just in the ninth inning.

Last Friday, Price turned to Iglesias for a two-inning save as his team clung to a 2-0 lead over the Cardinals. The right-hander responded by allowing only one baserunner and striking out three to preserve the win.

The most notableÃ‚Â example of this new mindsetÃ‚Â came on Monday against the Pirates. The Reds jumped out to a 5-0 lead by the second inning and seemed well on their way to a win. At the end of that inning, the Pirates’ win expectancy was just 8.3 percent. Brandon Finnegan, though, did not have his best stuff. He stranded five runners through the first two frames before walking in a run in the third with nobody out. At that point, the Pittsburgh win expectancy had crept up to 31.2 percent — that was the highest it would get. 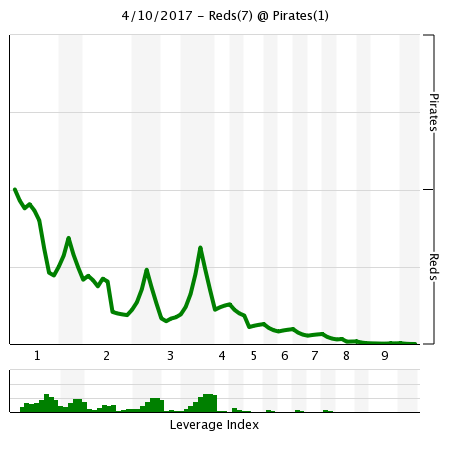 Price, sensing a potential turning point in the game, opted to turn to his bullpen early. And he didn’t bring in a long reliever, as many managers might in that scenario; he brought in Lorenzen. By now, everyone knows what happened. The 25-year-old mowed down the next three Pirates hitters to leave the bases loaded and keep the Reds’ lead at four. That completely destroyed the Pittsburgh momentum, and Lorenzen went on to throw two more perfect innings as his team cruised to a 7-1 victory.

The Cincinnati skipper was up to his new tricks againÃ‚Â the next night, bringing in Iglesias in the eighth inning after Blake Wood gave up a pair of singles. Despite the fact that his team was up 6-2, Price wanted to halt the Pirates’ momentum right there. The move paid off, as Iglesias squashed the potential rally and finished out the game in the ninth.

Even when the team doesn’t hold a lead, he’s used his best arms to keep the Reds in the game. This occurred in the very first game of the season. Although the Phillies led the entire game, they were only up by three in the late innings, a lead small enough that the Reds had a realistic chance of a comeback. Lorenzen pitched a scoreless eighth, and Iglesias followed with a scoreless ninth to keep the team within striking distance. Scooter Gennett then came through with a two-run home run in the bottom of the ninth to cut the Philadelphia lead to one. The Reds went on to lose the game 4-3, but it was another example of Price’s changing bullpen management. Would Dusty Baker have done any of this? Doubtful.

It’s been a refreshing change from Price, to say the least, and many have questioned why he wasn’t more strategic before this. Was it a Walt Jocketty issue? Is Price more free to deviate from the norm under the analytics-minded Dick Williams? It’s hard to say without being in those meetings behind closed doors.Ã‚Â Whatever has changed, it’s a refreshing sight to see a Reds manager use his bullpen based on game situations and not predefined roles.