The first place Cincinnati Reds are now 5-2 to start 2017! The Reds hitters were able to force Pirates stater Tyler Glasnow, who is the #7 prospect in the MLB, out after just 1.2 innings. The Reds hitters had patient trips to the plate, and scored two runs courtesy of bases loaded walks. The Reds quickly took a 5-0 lead in the second inning when Adam Duvall drove in Hamilton and Peraza with a two out single.

Reds starter Brandon Finnegan looked good early, but ran into a wall in the third inning. He walked in a run, and it was quickly 5-1 with the tying run at the plate and zero outs. Reds skipper Bryan Price decided there was no way he was letting this game get away from him, and brought in Michael Lorenzen earlier than anyone could have anticipated.

The Cubs and Dodgers are just getting underway because of a rain delay. A Cubs loss would put the Reds alone in first place in the NL Central. 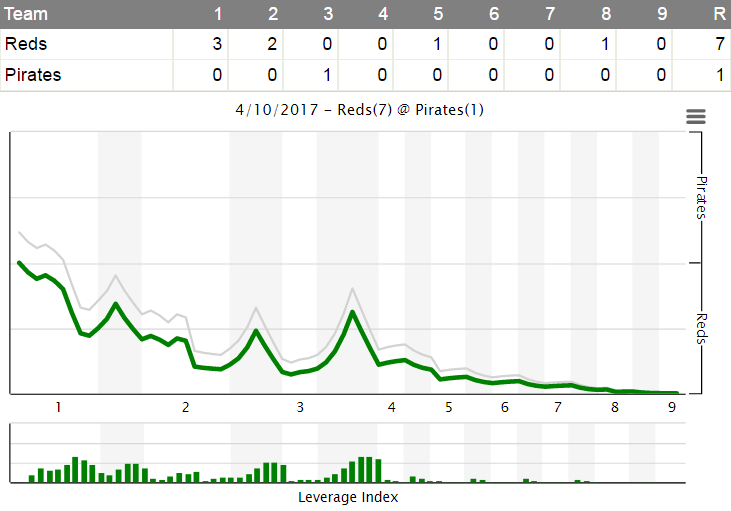 According to FangraphsÃ‚Â WPA statisticÃ‚Â (winning percentage added), the most important play of the game was Adam Duvall’s 2-RBI single with 2 outs in the 2nd inning, giving the Reds a 5-0 lead.Ã‚Â That play increased the Reds chances of winning by 9.9% (from 79.9% to 89.6%).

The next three biggest offensive plays of the game:

The three biggest outs of the game:

Brandon Finnegan lost it in the third inning. Finnegan loaded the bases with no outs, and then walked in a run. All of a suddenÃ¢â€žÂ¢, the Reds lead was 5-1 and the tying run came to the plate. Bryan Price, more on him below, made the bold move to go to one of his best relievers right then and there. Lorenzen proceeded to get a weak fly out for out #1. He then got a weak ground ball that he fielded perfectly, and then got the runner out at the plate for out #2. He then struck out the pitcher to end the inning.

Lorenzen wasn’t done there. He proceed to pitch two more perfect innings, and stabilize a nice Reds advantage. How do you not love Lorenzen? He has no problem coming into the third inning, despite being one of the Reds top relievers. He begs Price to let him pinch-hit, and then obliges his manager with two home runs. Bryan Price even said in the postgame that Lorenzen told Mack Jenkins that he could finish the game tonight if Price needed him to.

I am going to say something crazy. I was on the fence most of last season with Lorenzen in the bullpen. Everyone here at RN has begged to let him start, and for good reason. I am now fully on board with Lorenzen in the bullpen IF Bryan Price is going to use Lorenzen the way he has shown. Tonight, Lorenzen got the three most important outs of the game, and got a total of 3 more outs than tonight’s starting pitcher, Brandon Finnegan. Lorenzen was not good as a starter when he got that chance in 2015. Sure, many pitchers aren’t in their first year, but he was really bad. Lorenzen has excelled as a reliever.

There has to come a point when you commit to some of your best arms being starters, and some being relievers. I believeÃ‚Â the Reds can be competitive this year. You saw how valuable great relievers can be when they are used to their fullest potential in last years postseason. Lorenzen looks like he fits that mold completely.

Jose PerazaÃ‚Â went 2 for 5 tonight. Tonight was one of the first times we have seen Hamilton and Peraza on base together. It very well could have played a hand in the Pirates starter struggling with his command.

Eugenio SuarezÃ‚Â hit his second home run of 2017, and it was an absolute bomb (one of the highest arcing homers you will ever see). Suarez also walked THREE times (once with the bases loaded)!

Scott ScheblerÃ‚Â had an RBI walk!

Cody ReedÃ‚Â pitched three perfect innings tonight! 3.0 IP, 0 H, 0 R, 0 BB, 4 K. It is only a matter of time before he gets a start in 2017. Remember, there are innings limits for these young pitchers, so stay patient Nation!

You know things are going well for your team whenÃ‚Â Scooter GennettÃ‚Â has 2 home runs in the first week. 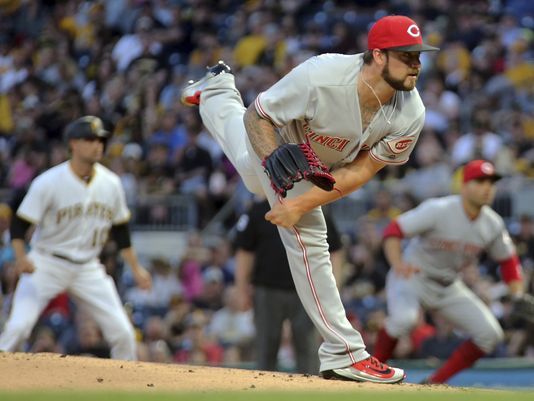 Brandon FinneganÃ‚Â started out looking promising, but absolutely lost it in the third inning. He loaded the bases, and then walked in a run. A harsh reminder that there are growing pains with young pitchers. It does make it easier when your team wins through the growing pains.

The Reds letÃ‚Â Wade LeBlancÃ‚Â dominate them after they chased Pirates starter Tyler Glasnow. LeBlanc only had to throw 64 pitches in 5.1 innings. The Reds had a great chance to make the Pirates burn through their bullpen in the first game of the series after their starter only lasted 1.2 innings.

Could you ever imagine Dusty Baker bringing in Jonathan Broxton in the third inning? That is basically whatÃ‚Â Bryan PriceÃ‚Â did tonight with Michael Lorenzen. Price wasn’t going to mess around with a 5-1 lead, and the tying run at the plate. He went to one of his best relievers, right then and there. Lorenzen got the three biggest outs of the game according to WPA (see above). That is terrific managing. It feels like Price is getting more and more confident with managing analytically, and it is a welcome sight to see (some of that could likely be credited to new GM Dick Williams). Price ended up not needing Raisel Iglesias or Drew Storen tonight. If he brought in a mediocre reliever in that spot like most managers would have, Price could have possibly ended up having to use all three (Lorenzen, Iglesias, and Storen).

Bryan Price might have just earned a contract extension tonight, from my perspective.

The Reds have homered in all 7 games to begin 2017. According to the broadcast, the last time that happened was 1999.

I must say, I am having a lot fun watching the Cincinnati Reds. How about you?