Bruce Springsteen released the songÃ‚Â Blinded by the Light in 1973. His first single, it drew on the colorful people heÃ¢â‚¬â„¢d met growing up. The lyric Ã¢â‚¬Å“boulder on my shoulderÃ¢â‚¬Â referenced the songwriter himself harboring a chip on his shoulder, something to prove.

While Blinded bombed for the 24-year-old Springsteen, Manfred MannÃ¢â‚¬â„¢s Earth Band took the songÃ‚Â to #1 in the Billboard Hot 100 chart Ã¢â‚¬â€œ the only Springsteen song ever to reach that pinnacle. It hit the top of the chart on February 19, 1977, making it the #1 song in America the day Bronson Anthony Arroyo was born into this world. 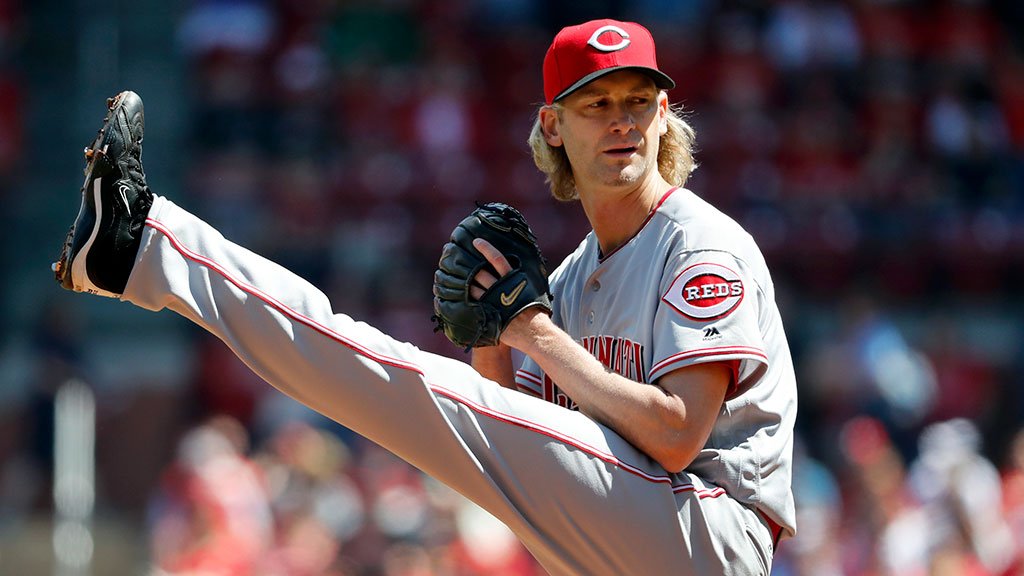 The last time Arroyo stood on the pitching mound for the Reds in a major league game was September 28, 2013, when he surrendered six earned runs to the Pittsburgh Pirates in 4.2 innings. As that season reached a disappointing conclusion with Johnny Cueto dropping the ball in PNC Park, Reds fans were preoccupied with Dusty BakerÃ¢â‚¬â„¢s firing, Bryan PriceÃ¢â‚¬â„¢s hiring, Brandon Phillips trading and Shin-Soo Choo re-signing.

When the front office didn’t extend a qualifying offer and allowed Arroyo to reach free agency, it wasn’t that controversial. Even though the tall right-hander hadn’t missed a start in eight seasons for the Reds, it was widely believed the Reds wouldn’t or shouldn’t match the contract Arroyo would command on the open market. Arroyo signed a 2-year, $23.5 million contract with the Arizona Diamondbacks in February 2014.

Arroyo made a handful of starts for the D-Backs, the final one on June 15, before succumbing to elbow pain and Tommy John surgery. Recovery and successful rehab from that injury and surgery is baseball’s highway jammed with broken heroes on a last chance power drive. Arroyo has since been with the Atlanta Braves, Los Angeles Dodgers and the Washington Nationals without throwing a pitch that counted. Arroyo has battled Ã‚Â torn UCLs and ripped rotator cuff tendons determined to get to where he was today.

Now 40, Arroyo’s arm proved healthy enough to navigate a few appearances in spring training. Today, we welcomed the image of him once again wearing a #61 Cincinnati Reds uniform in a major league game.

Carrying that boulder on his shoulder.

Bronson Arroyo “ate” four innings today. Yes, he did. He gave up six hits, three walks and struck out two. His fastball topped out at 86 mph, but was usually 82-84. Arroyo looked exactly like he did in Goodyear. The Reds couldn’t have been surprised by the outcome. If they send Arroyo out for one more or ten more starts, that’s how he’s going to pitch.

Robert Stephenson replaced Arroyo in the fifth inning. Stephenson hadn’t pitched since the March 31 Futures game in Louisville. In 1.2 innings he walked six batters (one intentionally) and struck out four. Tucker Barnhart quit calling for fastballs. If you’re looking for something positive on which to hang your hat, it’s a nasty 82-mph breaking ball that Stephenson broke off to strike out Jed Gyorko on a full count. It’s tempting to say Stephenson should be starting in Louisville. On the other hand, will he learn any lessons there? Maybe performances like this at the major league level – starting or relieving – are the only way he’ll get the message.

Scott ScheblerÃ‚Â (.231/.375/.692) hit his second home run in as many days. Tucker Barnhart had a hit and a walk. Eugenio SuarezÃ‚Â hit a home run in the 9th inning. Patrick Kivlehan, subbed in for Joey Votto, made three nice defensive plays at 1B.

In the top of the fifth, the Reds sent Brandon Finnegan up as a pinch hitter. That’s the third time this year they’ve used a pitcher at the plate when they could have used a player who is paid to hit. Finnegan hit into a double play. The excuse, of course, is the short bench. In this game, I’m not sure what better opportunity Bryan Price was waiting to exploit. Sure, the other two times Rookie Davis doubled and Michael Lorenzen hit a homer, but it’s still a sign that something’s wrong.