Brandon Finnegan pitched a masterpiece, allowing just one hit over seven innings. He finished the evening retiring nineteen consecutive batters. The Reds offense was also held in check by Phillies starter Jerad Eickoff until the seventh inning. That is when Joey Votto hit a hanging curveball into the seats to give the Reds a 1-0 lead. They would tack on another run off a Zack Cozart single later in the inning.

The back-end of the Reds bullpen is drastically improved from Opening Day last season. Michael Lorenzen and Raisel Iglesias worked around several infield singles to shut the door for the Reds, and secure a 2-0 win for their first win of 2017.

The Reds are tied for first place in the NL Central. 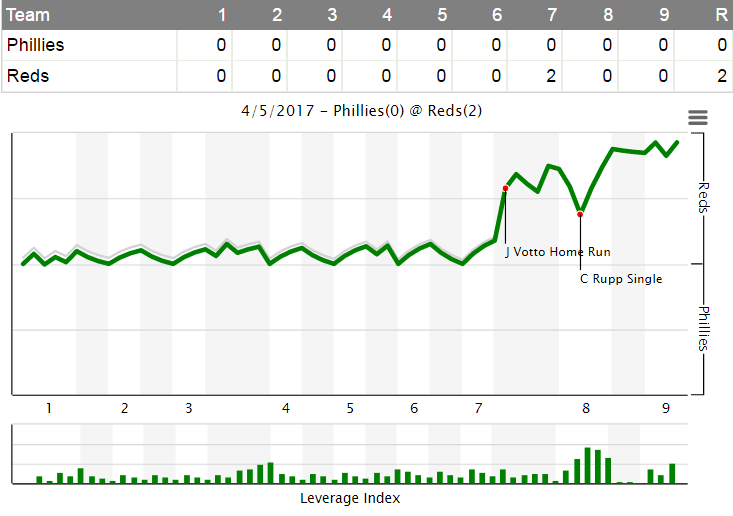 According to FangraphsÃ‚Â WPA statisticÃ‚Â (winning percentage added), the most important play of the game was Joey Votto’s solo home run in the 7th inning with 0 outs, giving the Reds a 1-0 lead.Ã‚Â That play increased the Reds chances of winning by 20.0% (from 58.9% to 78.9%). 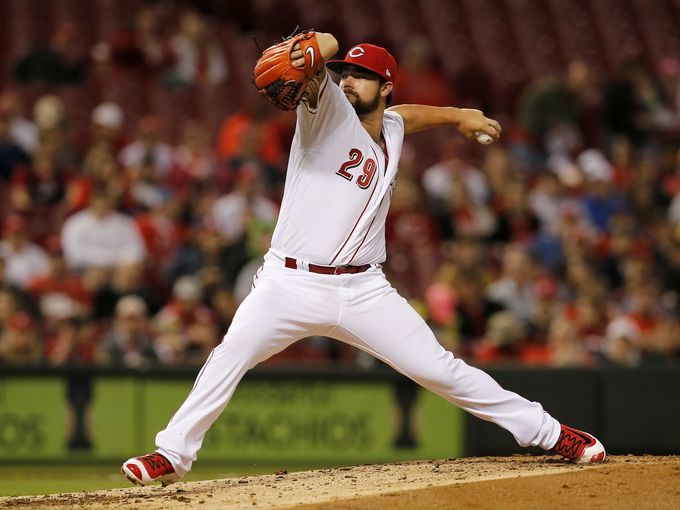 Finnegan was absolutely incredible tonight. He finished the game retiring 19 consecutive batters. He is only 23 years old. I repeat, he is only 23 years old! Finnegan’s fastball was reported around 95 MPH tonight. He averaged 91.8 last year. I do have to mention that the Phillies were 29th out 30 MLB teams in wRC+ against LHP in 2016, but nonetheless, you can’t start much better than he did tonight. I am excited to see if Finnegan can have a breakout 2017. He just might.

Finnegan pitched 7 or more innings in only 4 of his 31 starts last year. Already a quarter of the way there in 2017. #Reds

Going back to last year…

For some reason, Jerad Eickhoff (who was lights out for the first six innings) decided to hang a breaking ball toÃ‚Â Joey Votto.Ã‚Â It was kindly deposited into the right field seats. Votto made his first hit of the season count. In 2016, it took Votto ten games to hit his first home run.

Homer to Votto and double to Duvall both came on curveballs. Opponents hit .158 and slugged .281 against Eickhoff's curveball last year.

Michael LorenzenÃ‚Â got a very nice hold in the 8th inning. He gave up two extremely cheap singles to start the inning, and then proceeded to strike out the next two batters, and induce a weak groundout (81 MPH off the bat) to end the threat.

Lorenzen fastball at 98-99. Command on the breaking ball. Super tough. Two fluky infield hits against him. Still wish he was starting.

Raisel IglesiasÃ‚Â also gave up a cheap infield single, but was able to pitch around it with two strikeouts for the save.

Zack CozartÃ‚Â had a two-hit evening, including a RBI single in the 7th inning.

Billy HamiltonÃ‚Â walked (!) and stole a base in the third inning.

There was an hour rain delay? That’s all I got. Nice game all around from the good guys.

The early Reds story-line of 2017 is “will Joey Votto buy Zack Cozart a donkey?” According to Jim Day, Votto is bribing Cozart with a donkey if Cozart makes the All-Star team. Cozart apparently loves donkeys, and loves taking his son to see donkeys during spring training. Votto will even deliver the donkey to the clubhouse. So…..Reds fans if there is not a #VoteCozart campaign started by tomorrow morning, we all have failed at life.

One reason to have hope for the Reds in 2017 is the backend of the bullpen. They start 2017 with Michael Lorenzen and Raisel Iglesias. Last season, it was J.J. Hoover and Ross Ohlendorf. Better days are coming, nation.

One sign of (predictable) #Reds improvement: Bullpen has only allowed 1 earned run in 6 1/3 IP. Had second worst bullpen ERA in '16.