Welcome to the first edition of Three Up, Three Down, a new weekly column here at Redleg Nation that will detail which Reds are hot, and which Reds are not. Each week weÃ¢â‚¬â„¢ll review the previous week’sÃ¢â‚¬â„¢ worth of games, and highlight the three best and the three worst player performances.

WeÃ¢â‚¬â„¢ve only got one game in the books so far in the 2017 season, but we have quite a bit of Spring Training games to work with. So, whoÃ¢â‚¬â„¢s up, and whoÃ¢â‚¬â„¢s down? 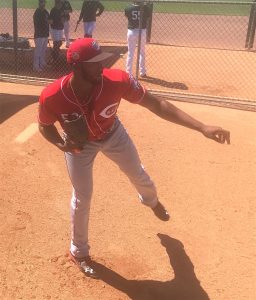 So, my first entry in this series, and IÃ¢â‚¬â„¢m already breaking the rules. But Davis and Garrett are in the same boat – unexpectedly (especially in RookieÃ¢â‚¬â„¢s case) making the Opening Day rotation. This has to be a huge boost to the morale for these two young pitching prospects, and is likely a huge disappointment for two other young pitching prospects. And yes, youÃ¢â‚¬â„¢ve guess it, weÃ¢â‚¬â„¢ll get to those two later.

Both Davis and Garrett earned their way into the starting rotation. ItÃ¢â‚¬â„¢s a move I question whether the previous front office was capable of making, and a relatively forward-thinking approach to building a starting staff. It shows us that the Reds arenÃ¢â‚¬â„¢t focused on winning games in 2017 – and depending who you ask, that might be fine – but it also shows the team is focused on winning games in 2018 and beyond. TheyÃ¢â‚¬â„¢re throwing spaghetti at the wall. LetÃ¢â‚¬â„¢s hope it sticks.

Brantley says Peraza will get on base at .400 rate. 7 players in MLB did that last year. Peraza doesn't walk. 67 PA in Goodyear, 0 BB.

Okay, so maybe Jose Peraza wonÃ¢â‚¬â„¢t get on base at a .400 clip, but the kid can hit the baseball, thatÃ¢â‚¬â„¢s for sure. Would I like to see more walks? Sure. Do I think his high batting average can be maintained? Probably not. Would I be surprised if BOTH of those things happened? I donÃ¢â‚¬â„¢t think I would be.

Peraza is in a key spot in the Reds lineup, a two-hole in which the Reds have really struggled to get premium production in the past few years. In actuality, Joey Votto is probably best suited for this spot, but if Peraza can continue to hit, he might be pretty dang good in between Votto and Billy Hamilton.

A nice story here, for sure. Hometown kid comes home, cracks a home run in his first at bat of the spring wearing the uniform of his favorite childhood baseball team. Dat Dude SG struck again in his second AB in the first game of the season, putting a ball in the seats to opposite field in an effort to get the club back in the game. He only succeeded in making the 3-4 loss look a little better in the papers than a 1-4 loss, but at this point, IÃ¢â‚¬â„¢ll take it.

I donÃ¢â‚¬â„¢t expect Scooter to bring a ton of value to the Reds in 2017. He should, however, provide a pretty good left handed bat off the bench and a semi-reliable glove at second base, two factors that might see him get in the game a little earlier than a standard defensive replacement or pinch hitter might be, as was the case on Opening Day. 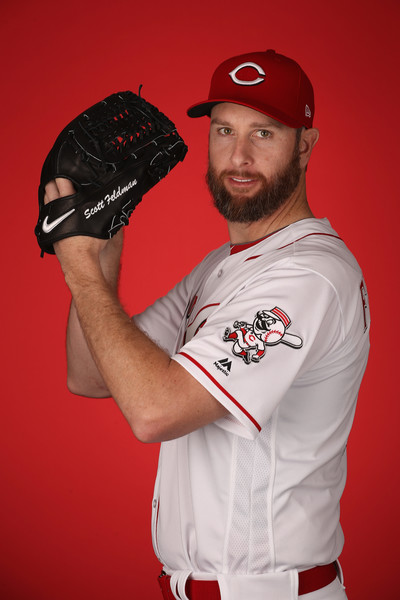 DonÃ¢â‚¬â„¢t let his parading around town in the back of a pickup truck fool you – Robert Stephenson is no longer the Reds top prospect. Not only was he not made a starter on the Opening Day roster, but he was relegated to the bullpen, a spot in which GM Dick Williams has said will give Stephenson the potential to prove he can get through a major league lineup one time, rather than trying to prove he can do it three times. It seems clear that Williams doesnÃ¢â‚¬â„¢t think Stephenson currently has the skill to make it in the majors as a starter, but sees the potential and isnÃ¢â‚¬â„¢t quite ready to give up on the young righty. Moving Stephenson to the bullpen for now is a strategy I personally agree with, and one weÃ¢â‚¬â„¢ve seen the St. Louis Cardinals perfect over the years.

Man, that was tough to watch. Scott FeldmanÃ¢â‚¬â„¢s opening day start was far from dominant, giving up 3 runs on 7 hits and two walks before basically being booed off the field. It wasnÃ¢â‚¬â„¢t all bad, and there were times in the game Feldman looked competent, but man, thereÃ¢â‚¬â„¢s nothing to get you on the wrong side of the Reds fanbase like giving up two homers on Opening Day.

I kid, of course.

WhoÃ¢â‚¬â„¢s on your Three Up, Three Down list? Leave a comment below, or tweet at me either at @JordanBarhorst or @redlegnation. WeÃ¢â‚¬â„¢d love to hear from you throughout the week to help build next weekÃ¢â‚¬â„¢s Three Up, Three Down. But donÃ¢â‚¬â„¢t let the cynicism get to you just yet. Because baseball is back, and itÃ¢â‚¬â„¢s a beautiful thing.