My city is a city in which we throw a parade on the first day of baseball season. Also that parade features a giant fiberglass rooster, one which is carefully slotted into a car wash 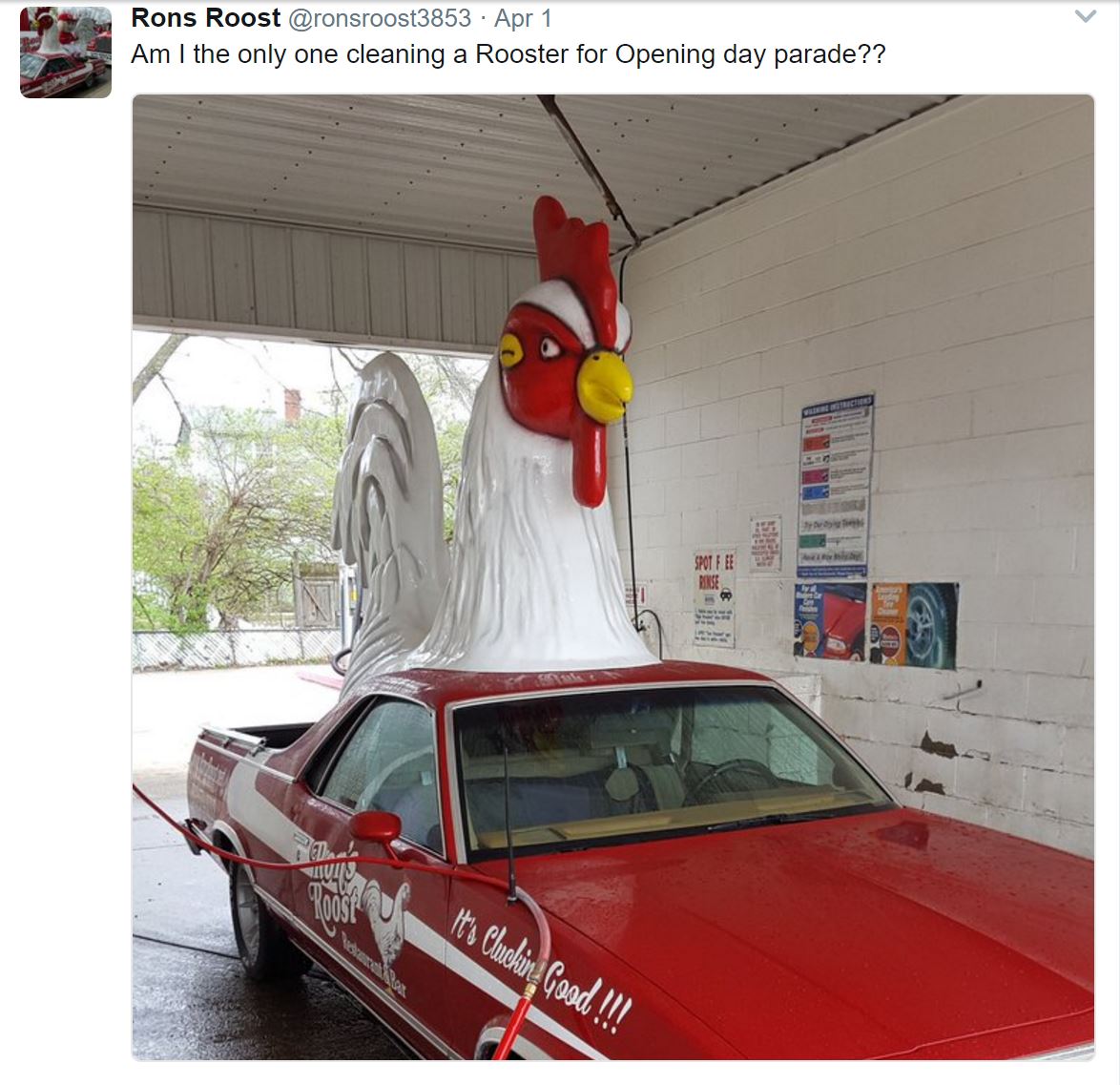 bay so as to look its best as it makes its way through the heart of downtown. My city is the best city in the world.

We not only send car-bound fowl sailing majestically past the populace, we dispatch one of our own to lead it. This year we shall be led into battle by Reds Hall of Famer Sean Casey.

This is such an obvious choice itÃ¢â‚¬â„¢s difficult to believe Casey hasnÃ¢â‚¬â„¢t Grand Marshalled at least 14 of the last 15 Opening Day Parades, with perhaps a single year off to let Sparky Anderson squeeze in. Even people who hate baseball love Sean Casey, who, WWE replica belt slung over his shoulder, recently aired a Twitter videoÃ‚Â promoting a charity auctionÃ‚Â for his foundation, CaseyÃ¢â‚¬â„¢s Clubhouse. Ã‚Â It included the words Ã¢â‚¬Å“unbelievable ukulele.Ã¢â‚¬Â

Sean was super-pumped about this ukulele. Sean is super-pumped about everything. I am surprised that he was never snapped up by a Florida team because he could generate power for an entire hurricane-stricken county simply by discussing what he ate for lunch that day. I would pay handsomely to hear Sean Casey narrate my everyday activities, particularly the slower yoga classes (Ã¢â‚¬Å“SHEÃ¢â‚¬â„¢S DOING JUST A COMPLETELY AMAZING JOB OF LYING THERE TOTALLY STILL LOOK AT THIS SHEÃ¢â‚¬â„¢S COMPLETELY CRUSHING ALL YOGA.Ã¢â‚¬Â) In an increasingly discouraging age of irony, Sean Casey is alert, attentive, loving life, and wants to tell you all about this rib joint he just discovered. I wrote part of my grad school thesis about his career because, as a nonfiction writer, I had trouble believing such a person actually existed.

His history in Cincinnati is bound up with Opening Day; he was, you may remember, traded into town about 18 hours before first pitch in 1998 in exchange for starting pitcher Dave Burba, at which point everyone settled into hate him. Then we met him and didnÃ¢â‚¬â„¢t hate him at all, because it is physically impossible to hate Sean Casey. Satan would meet Sean Casey and wish him a nice day and mean it completely.

I myself have meant Sean Casey twice. Once was by accident, when I went shopping for bras and wound up hugging Sean Casey instead (itÃ¢â‚¬â„¢s a long story and I needed a thesis to tell it.) The second time was as part of my work at the Reds Hall of Fame and Museum. The HOF was hosting a player photo session. I was Jack BillinghamÃ¢â‚¬â„¢s personal acolyte, but as Sean Casey was positioned to our left, I was also semi-in charge of him, for, as I was informed, Ã¢â‚¬Å“the line tends to lag around Casey and we need to keep people moving.Ã¢â‚¬Â He did not remember me and the aborted bra-buying mission. I brought him water and rode two whole floors with him in an elevator and also escorted Tony Perez to the bathroom. It was a terrific day and everyone around me is tired of hearing about That One Time I Was In An Elevator With Reds Hall of Famer Sean Casey.

Every little girl turned educator needs a That One Time I Was In An Elevator With Reds Hall of Famer Sean Casey story, and these are more and more difficult to come by. I used to walk the exhibits of the Reds Museum even when I wasnÃ¢â‚¬â„¢t scheduled to work just to press my fingertips against the glass protecting the last-out ball of the 1919 World Series. These were the teamsÃ¢â‚¬â€remembered or not, successful or cursed– who built the legacy Reds fans now own, guard, and build upon.Ã‚Â  Ã¢â‚¬Å“Do you know that not every city has a parade on Opening Day?Ã¢â‚¬Â IÃ¢â‚¬â„¢d say to the kindergarteners who came to visit in large, mill-about packs. Ã¢â‚¬Å“But weÃ¢â‚¬â„¢re lucky. We do. We have a party every single year because we are so happy that baseball has come back to us.Ã¢â‚¬Â

My favorite articles in the museum are the snatches of everyday existence which were considered disposable at the time, but now tell an undiluted tale of life in another era. One of these is an end-of season bulletin from the 1950Ã¢â‚¬â„¢s which informed fansÃ¢â‚¬â€and imagine the absolute cavalcade of lawsuits resulting from even suggesting such a thing todayÃ¢â‚¬â€what the home address of each player was. If having received the ability to knock up Wally Post at 2 AM wasnÃ¢â‚¬â„¢t enough for you, the team also included the location of where players worked in the off-season (they had to work in the off-season.) Joe Nuxhall,Ã‚Â I am told, labored at an automobile shop, and directed his autograph requests there. And, during the Crosley Field era, that was only necessary if you missed the players walking directly past your seat en route to the field.

In 2017, at Great American Ball Park, the team will still walk past your seatÃ¢â‚¬â€as long as you pay a minimum of $260 for it in exchange for nine innings in the Diamond Club. Ã‚Â But the players are hermetically sealed behind a soundproof window, and while I once lost my four-year-old nephew on a ball park tour only to find him pressing his hand against the glass with Brayan PeÃƒÂ±aÃ‚Â meeting his palm on the other side, such interaction is usually sterile, contained, and fully PR-managed.

In an era in which the pound of chocolate fudge I once placed in a carry-on bag was swabbed, wanded, and x-rayed by the TSA, this is understandable. ItÃ¢â‚¬â„¢s also understandable that social media has rushed in to fill the gap where .000000001% of the population has ruined it for the rest of us. We now donÃ¢â‚¬â„¢t have to wait for an Official Sportswriter Person to gather Dexter FowlerÃ¢â‚¬â„¢s thoughts on the weather or the current state of his hair. You are going to know them whether you want to know them or not.

Instaface, Tweetbook, and Snapgram create the illusion, however fleeting and addictive, that we have formed an individual bond with those we see on the field. We can express support and derision, directly and immediately, and we can hide our faces or let everyone know just which employing entity to tag when we may have expressed a deadly unpopular opinion and are deemed no longer fit for polite society. ItÃ¢â‚¬â„¢s a luxury the fans leap at but which athletes regard with reasonable suspicion. (Joey Votto does not have a Twitter account. But then, Joey Votto does not need a Twitter account. Joey Votto, IÃ¢â‚¬â„¢m pretty sure, does not actually consume food, sustaining his body instead on the power of icy stares and game film.) It is this relationship we are seeking when we wheel out the giant fiberglass chicken once a year:Ã‚Â  Baseball is a noun. It is at once people, a place, and a thing, not to mention the connection between the three. Although a game which requires almost zero physical contact between the players, the electrons of it arc between generations, state of play, and fakeness of grass.

Knowing this intellectually, however, was zero preparation for the day when Sean Casey followed me on Twitter.

For those of you who do not use Twitter, the way it works is, you can read the messages of just about anyone you like, but itÃ¢â‚¬â„¢s not a reciprocal relationship. When you follow an account, the person running it does not have to, in turn, pay attention to your very deep musings on what this traffic is like and the particular sheen the green beans on your plate have attained in the microwave.Ã‚Â Because of this, Twitter can be profoundly personalized and also profoundly stupid.

When I received an alert that Sean Casey had hit the follow button next to my name, I was astonished, and pondered, not unlike the Virgin Mary at the Annunciation, what sort of greeting this might mean. Why on Earth had he done this? Did he like something IÃ¢â‚¬â„¢d written? Was he trying to, at random, connect with his fanbase? Or was heÃ¢â‚¬â€and this seemed the most logical explanationÃ¢â‚¬â€afraid that I was the kind of person who tracked him 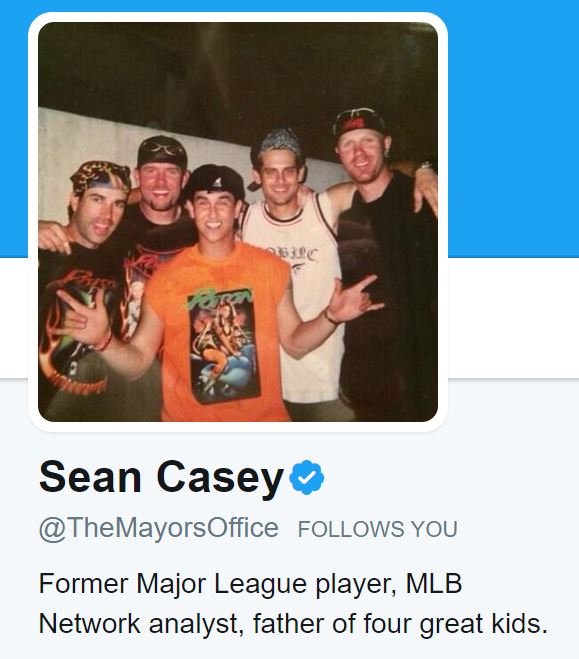 to restaurants and quietly gathered his straw wrappers for use in ritual offerings, and he was simply tracking my whereabouts so as to be somewhere else at all times?

I handled this watershed like a complete professional, by which I mean I screenshotted the follow alert, posted it on Facebook, texted my husband although he was in the act of flying an airplane containing several dozen paying passengers, and called my mommy.Ã‚Â  It transformed my account for days and days: What would Sean Casey think about this tweet? Would Sean Casey be offended by my reflections on Limited Edition Peeps Oreos? Should I let Sean Casey know about the old people swimming in my hotel pool on a 65 degree day?

What relaxed me back into my usual state of spamming the worldÃ¢â‚¬â„¢s Twitter feeds with pictures of baby horses, Patrick Henry, and typewriters was remembering why Sean Casey, despite all the Pennsylvanianess of him, became our Sean in the first place: His hooray-lets-play approach to this world of ours transcends Twitter. He seems like a nice person, and he is, refreshingly… a nice person, unPhotoshopped and unpackaged. Bond-forming athletes like Sean Casey transcended the gauzy two-way mirror of social media before it even existed, and they will transcend the insistence of those who swear this is all just a business anyway, the players who come and go and come and go without a glance towards any of us. It happens sometimes. Not all the time. But enough so that we line the basepaths anyway, year after year, part of the noun: Ã‚Â The people. The place. The thing.

Because this year and next year, the chicken will roll. We might think it would happen with or without us, but it the reality is, it happensÃ‚Â for us.

There’s hardly a team sport with less physical contact than baseball. Instead of pushing away, it pulls together.

And we get to watch.