What if the Cincinnati Reds were run by the fans? What if Dick Williams and Bryan Price asked for fan input when making make-or-break decisions? What if YOU could control the fate of your favorite baseball team?

Well, thatÃ¢â‚¬â„¢s what weÃ¢â‚¬â„¢re going to set out to do in this new series, The Fake Reds. Using the popular baseball simulation game Out of the Park Baseball 18, IÃ¢â‚¬â„¢ll be taking over as the GM/Manager of the Cincinnati Reds. Starting with the Opening Day roster, IÃ¢â‚¬â„¢ll be going down a divergent path from the Real Reds, making moves and reacting to Fake Reds World transactions, injuries, and drama.

Along the way, IÃ¢â‚¬â„¢ll be asking for your opinions on major turning points. If the Fake Reds somehow find their way into contention, which of our prospects should we unload to bring in that piece to boost us into the playoff race? If Billy Hamilton struggles in the leadoff spot again, who do we plug in at the top of the lineup to replace him? When do we call up our young studs like Jesse Winker, Sal Romano, and Dilson Herrera? ItÃ¢â‚¬â„¢ll all be up to you.

If you havenÃ¢â‚¬â„¢t heard of Out of the Park Baseball, itÃ¢â‚¬â„¢s the premier simulation baseball game available for Mac and PC. It puts you in the shoes of a GM or Manager (or both!) of a real major league baseball game. The game really shines in its realism – insanely accurate details just about everywhere it counts. Real rosters, down to the obscure 16 and 17 year olds in your international developmental roster. Real financials for each team, real scouting reports – it really is like taking over a virtual version of your favorite team.

Of course, with great power comes great responsibility. It’s easy to run a team into the ground in OOTP, so you have to be careful. If you perform badly enough, and donÃ¢â‚¬â„¢t meet your ownerÃ¢â‚¬â„¢s goals, you can be fired from your position.

The game also features accurate historical rosters, and a multitude of ways to incorporate them into your game. Want to see what Johnny Bench and Joe Morgan could achieve on todayÃ¢â‚¬â„¢s Reds team? You can do that!

WeÃ¢â‚¬â„¢ll be playing a pretty strictly realistic game for this series purposes, but if IÃ¢â‚¬â„¢ve interested you, go buy OOTP18 and check it out for yourself. 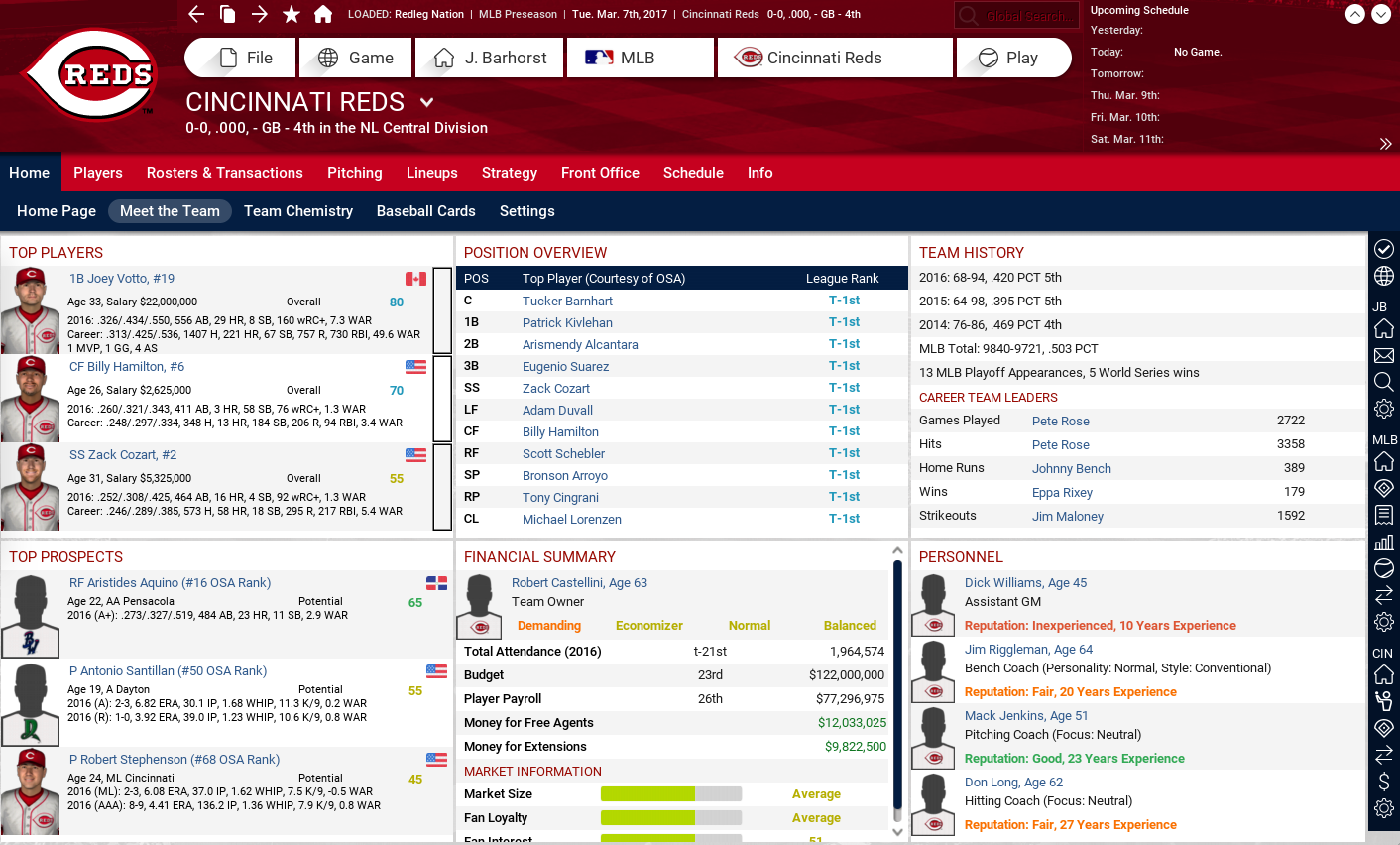 The game doesnÃ¢â‚¬â„¢t take into account real-world media opinions on players and prospects, which is why you see the three Ã¢â‚¬ËœTop ProspectsÃ¢â‚¬â„¢ you see in the bottom left. Also, I think youÃ¢â‚¬â„¢d be hard pressed to find anyone who thinks Zack Cozart is the third best player on the team. Regardless, this screen houses a pretty good overview of our team to start the year. 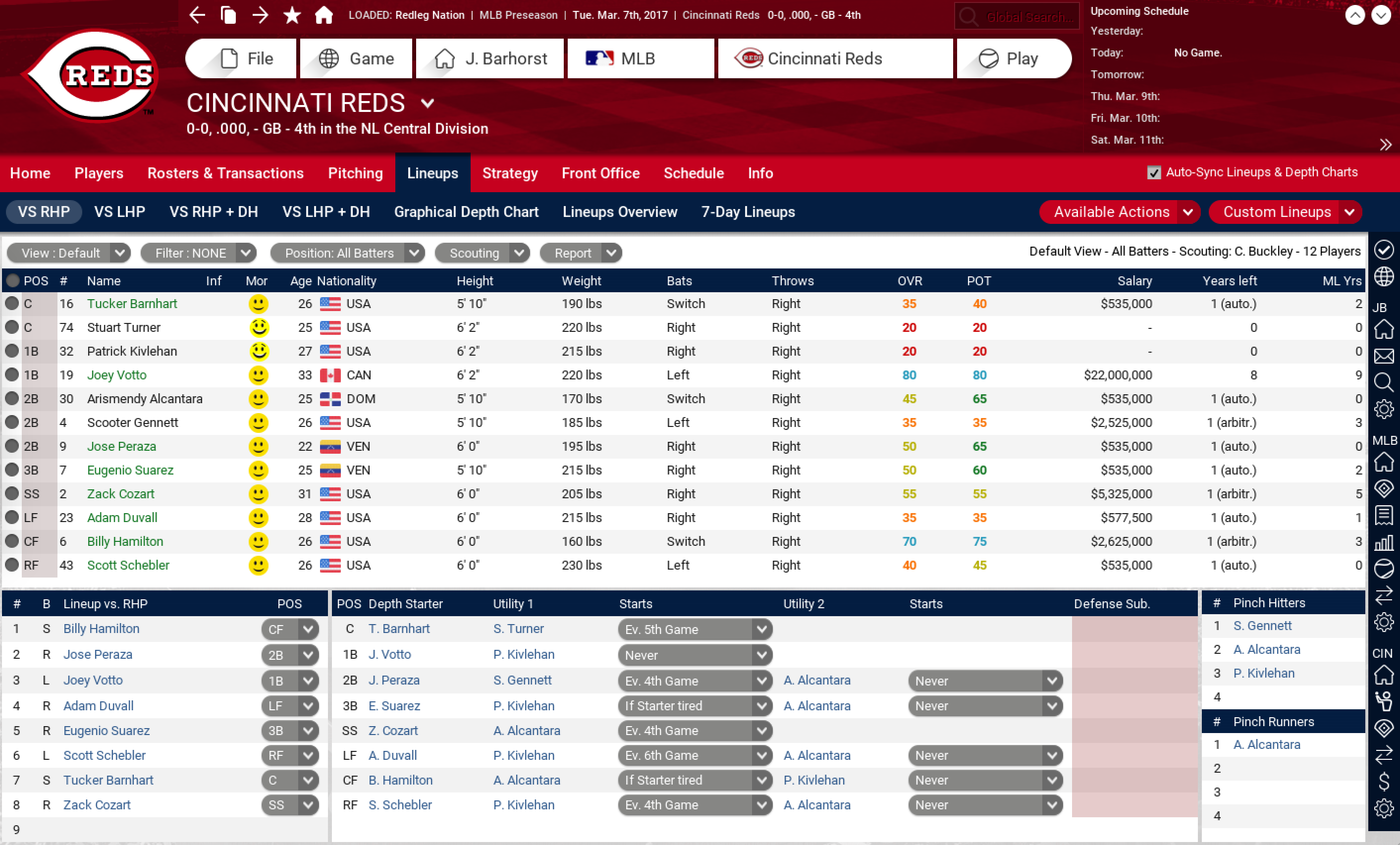 Here are our lineups and depth charts. IÃ¢â‚¬â„¢ve set them up initially to mirror what the Reds will most likely do to start the season. Lineups against righties are almost identical to the lineup vs lefties, but I do have Kivlehan starting over Schebler against lefties, with Schebler starting every other third game against lefties. This will obviously be in flux as the season goes along. Let me know if you have any suggestions for this part – do we want to play by the books, try out an experimental lineup? 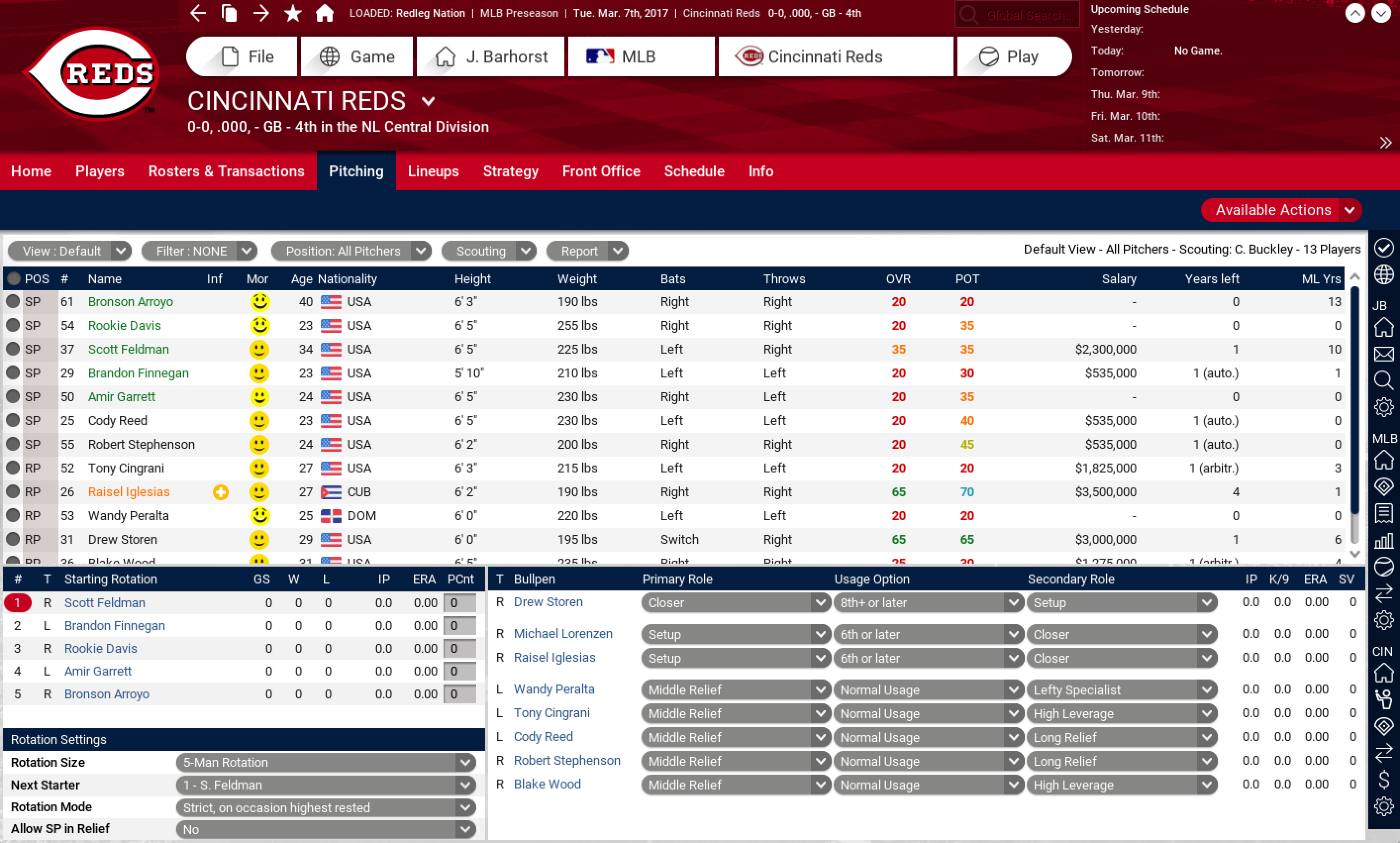 And our pitching staff. Again, this is set up how the Reds will likely use the staff to start the season. All of this is also up for debate. 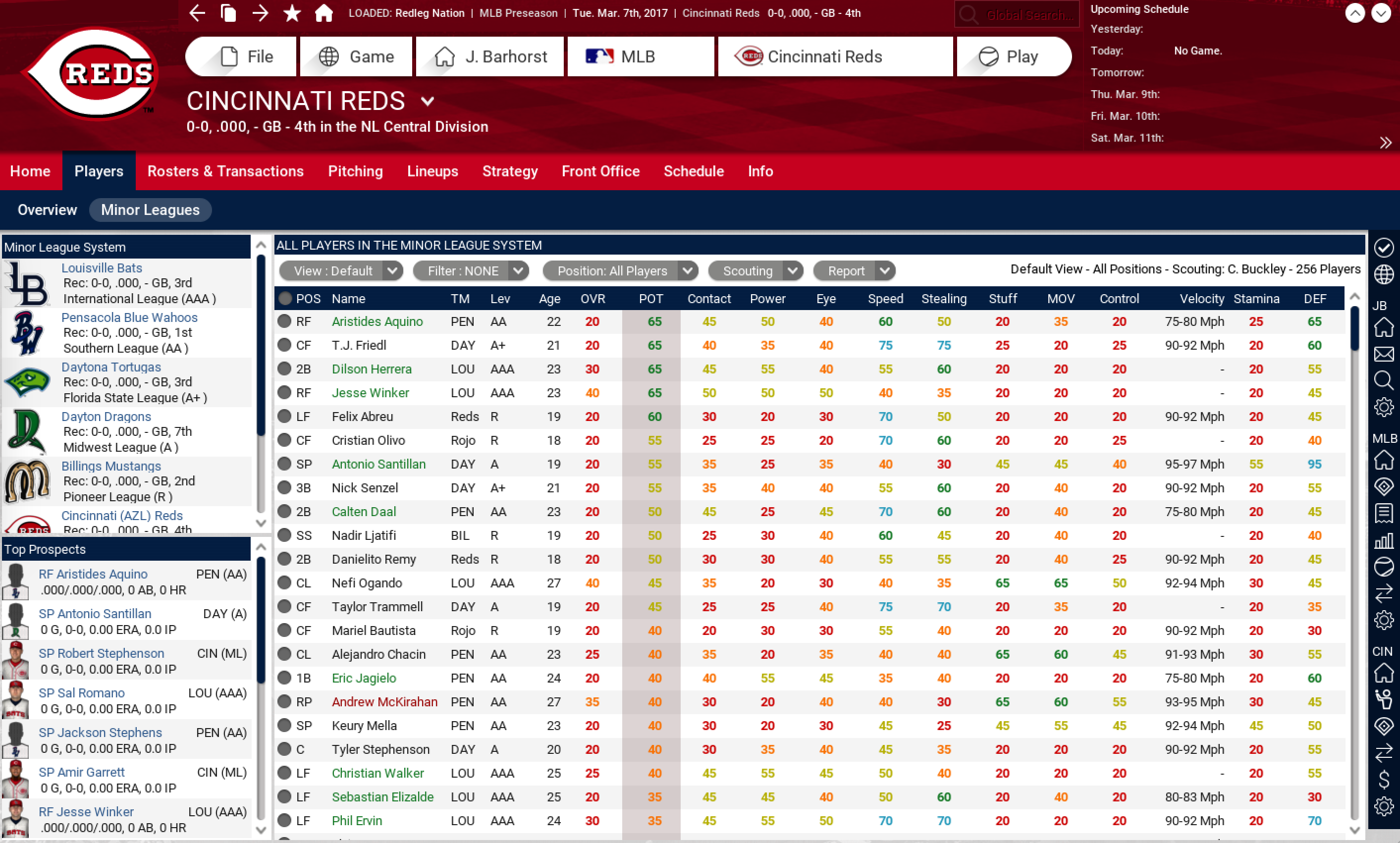 And, to wrap up todayÃ¢â‚¬â„¢s look at the team, here is the farm system. I let the game automatically set which players start at which levels, with the exception of a few players the game is not as high on as the Real Reds are.

An important note about the ratings in OOTP: They follow the traditional 20-80 scouting rating scale. Also, they arenÃ¢â‚¬â„¢t real ratings, like in other sports games like Madden or The Show. This is just what my personal in-game scout (Chris Buckley, in this case) thinks about these players. In the game, Buckley happens to favor players with tools over production, which is why Aquino is thought of with such a high regard. It doesnÃ¢â‚¬â„¢t mean Nick Senzel will never be better than a 55 OVR player. He could be much better than that, or much worse. A different team’s scout could think Senzel should be rated 80 OVR. Future productionÃ‚Â all depends on how we bring him along, and how he develops. Like in real life, itÃ¢â‚¬â„¢s mostly up to chance. Finding our best players in the future will be a combination of our scouting grades and minor league production, just like in real life.