The 2016 Milwaukee Brewers and the 2016 Cincinnati Reds were in a grueling battle for last place in the NL Central last season. The Brewers Ã¢â‚¬Å“lostÃ¢â‚¬Â that competition, but just barely. Are we in for more of the same in 2017?

There are a lot of parallels between the Cincinnati Reds and the Milwaukee Brewers, not only when looking ahead to the 2017 season, but also when looking back quite a bit. Both teams started the 2010s with very good teams – the Brewers won 96 games in 2011, and the Reds won 97 the year after. And, as Major League Baseball ebbed and flowed as it’s known to do, both of those talented teams were disassembled, resulting in two small-market teams near the bottom of the barrel.

For as bad as the final record was for Milwaukee, only narrowly missing out on joining the 90 loss club, there were a lot of positives to come from the 2016 season. In fact, if not for starting the year with an 8-15 April, which saw two different three-game losing streaks and a four-game losing streak to end the month, we might be telling a different story about the 2016 Brew Crew.

Guys like Junior Guerra, Jonathan Villar and Keon Broxton enjoyed breakout seasons. Ryan Braun had his best season since 2012, Chris Carter led the league in home runs, and a bright young star in Orlando Arcia got his feet wet with 216 plate appearances. Things are looking up for the Brewers. How will 2017 treat them?

Until a few days ago, when the Reds decided to throw a couple of young guys directly into the flames of the starting rotation, the Brewers and Reds were in a similar position with their starting rotation: seven guys for five spots. The Brewers coaching staff have still been mum on who will be occupying the third, fourth and fifth starters spots to start the season, with only Junior Guerra, the opening day starter, and Zach Davies being a sure thing for the Opening Day roster.

Wily PeraltaÃ¢â‚¬â„¢s throwing schedule, should it stay the same, would allude to him taking the third start of the year. The Brewers have also listed Matt Garza and Jimmy Nelson as the starting pitchers for two preseason exhibition games before the start of the season. While this doesnÃ¢â‚¬â„¢t necessarily mean much, and MilwaukeeÃ¢â‚¬â„¢s front-office has said thereÃ¢â‚¬â„¢s no decision made just yet, it certainly looks like Peralta, Garza and Nelson have the timing right to be included on the roster come Opening Day.

If thatÃ¢â‚¬â„¢s the case, it means rotation hopefuls Chase Anderson and Tommy Milone will either be sent to the Ã¢â‚¬Ëœpen or sent to the minor leagues to start the season. Skipper Craig Counsell hasnÃ¢â‚¬â„¢t said for sure, though, so things are still a little up in the air with Opening Day now only a few days away. 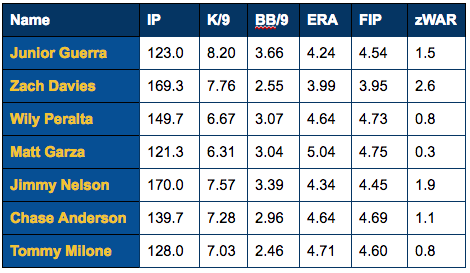 IÃ¢â‚¬â„¢ll be keeping an eye on Junior Guerra, and his projected regression. ItÃ¢â‚¬â„¢s definitely warranted – not many 31 year old waiver claims with no prior MLB success can claim to have pitched 120 innings with a 2.81 ERA, and even fewer can claim to have replicated that success in a second straight season. That being said, the projections still see him as a middle of the pack starter, which is probably closer to what he actually is at this point in his career.

Zach Davies is also primed for a big year. HeÃ¢â‚¬â„¢s probably the BrewerÃ¢â‚¬â„¢s best pitcher right now, and if he can stay healthy, has the potential to really turn some heads this season.

Not shown here is the 2.0 zWar projected for top pitching prospect Josh “Bill” Hader. ZiPS projects the youngster to have almost 11 K/9, which is awesome. Hader wonÃ¢â‚¬â„¢t start the year in Milwaukee, but he may very well see time in the big leagues soon.

Edit:Ã‚Â Since the publishing of this article, the Brewers announced that Matt Garza will start the year on the DL, and Chase Anderson will be taking his spot in the rotation. The rotation was finalized as Guerra/Davies/Peralta/Anderson/Nelson. As expected, Tommy Milone will start the season in the bullpen. 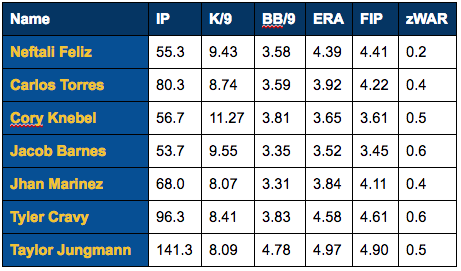 Neftali Feliz. After spending most of the beginning of his career as the closer for the Texas Rangers, Feliz got hurt and travelled around a bit, finally bouncing back with the Pirates last season. He spent a lot of the offseason on a lot of Reds fansÃ¢â‚¬â„¢ wish list, but ultimately signed with Milwaukee to presumably be their closer. HeÃ¢â‚¬â„¢ll need to lower his HR/9 (a career high 1.46 last season) if he wants to keep that role over some of MilwaukeeÃ¢â‚¬â„¢s more talented relievers. Whether the spike in homers was due to bad luck or Feliz still attempting to regain his previous form, weÃ¢â‚¬â„¢ll have to find out in 2017.

Feliz will bolster an already good BrewerÃ¢â‚¬â„¢s bullpen, which ranked 6th in the National League in combined-ERA last season.

A small note here – Taylor Jungmann, who got off to an awful start last season (9+ ERA in April) has been told heÃ¢â‚¬â„¢ll need to make the team as a reliever and earn his way back into the rotation. My money is on him starting in the minor leagues and working his way back that way.

The Brewers lineup is one to watch in 2017. Each position has a storyline attached to it that make this team an interesting one to keep tabs on. Here are the projections for the players who project to get the bulk of the playing time for Milwaukee: 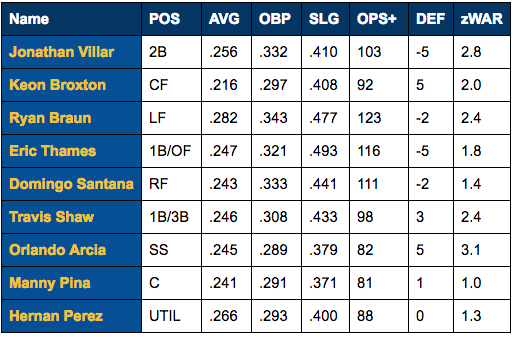 There are ten players here, because thereÃ¢â‚¬â„¢s a lot of position utility in this lineup. Hernan Perez is well known as a super-utility guy, and has even been named the teamÃ¢â‚¬â„¢s emergency catcher. He played every position in 2016 except pitcher and catcher, but may be given the opportunity to strike one of those from his list. His ability to play all over the field gives Craig Counsell the ability to come up with some differentiated lineups.

The Brewers have a very good young core of talent on the offensive side of the ball, and theyÃ¢â‚¬â„¢re only getting younger. With a number of players who have either broken out recently or are prepared to break out in 2017, the lineup has the potential to have some pretty big numbers at the end of the season.

There are obviously a lot of big names to watch here, but IÃ¢â‚¬â„¢ll have my eyes on Eric Thames. The 30 year old first baseman makes his return to the MLB, after spending 3 seasons obliterating baseballs in Korea. He hit .347/.448/.714 in foreign ball, with 124 homers in that span. Whether or not he can replicate that in the majors is yet to be seen. HeÃ¢â‚¬â„¢s struggled with some extreme shifting in Spring Training, but if he can make that adjustment, thereÃ¢â‚¬â„¢s a lot of upside there.

Guys like Orlando Arcia, Jonathan Villar, Keon Broxton, and of course Ryan Braun should also turn in quality seasons. And itÃ¢â‚¬â„¢d be foolish to sleep on Hernan Perez and Manny Pina, two players who started to put things together last year, and project to have solid big league seasons this year. The projections donÃ¢â‚¬â„¢t really think as highly of the BrewerÃ¢â‚¬â„¢s lineup as I do, but itÃ¢â‚¬â„¢s likely accounting for the high upside nature of the talent, which seems to be a recurring theme when it comes to this team.

Another (less serious) sidenote: If we’re casting a movie about the 2017 Brewers, I think Eddie Redmayne would make an amazing Craig Counsell. Might even get Brendan Fraser back into the acting game to play Ryan Braun. If you’re reading this in Hollywood, send me a tweet!

And how! Speaking of high upside talent, the Brewers have been loading up on guys who fit this mold to a T. For that reason, they rank highly on just about every pre-season farm system ranking list you can find. IÃ¢â‚¬â„¢ve used MLB.comÃ¢â‚¬â„¢s prospect ranks in the table below, outline the clubÃ¢â‚¬â„¢s top 10 prospects, broken down into a hitters list and a pitchers list: 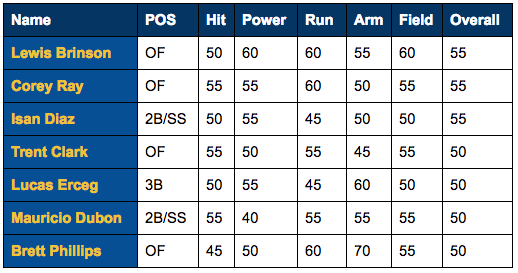 Of the top 10, Brinson, Ray, Hader, Ortiz, and Diaz all made the MLB.com Top 100 Prospect list, with Diaz bottoming out the list at 65. ThatÃ¢â‚¬â„¢s five of the top 65 prospects in baseball – not an easy feat to accomplish. From what IÃ¢â‚¬â„¢ve seen and heard, most of these guys are seen as high ceiling players vs the more high floor guys you see on the Reds prospect lists. The Brewers are hoping each of them hits – something you definitely shouldnÃ¢â‚¬â„¢t count on, but having that talent floating around in the system will never be a bad thing.

I think a few of these guys probably make their MLB debuts in 2017. Brinson and Hader, specifically, could really add even more dynamic talent to this roster. The Brewers front office have shown in the past they aren’t scared to start their prospects to let them get their feet wet, having done that very thing with Orlando Arcia in ’16.

The Brewers, in my opinion, have the pieces to take a step forward this season. They wonÃ¢â‚¬â„¢t win the pennant, and if they get to .500, itÃ¢â‚¬â„¢ll be by the skin of their teeth. However, the future looks bright again in Milwaukee. TheyÃ¢â‚¬â„¢ll be a definitely hurdle for the Reds down the line for the Next Great Reds Team.