The Reds played at home against Seattle with the same roster as the one that played the A’s yesterday, plus Devin Mesoraco catching and batting third.Ã‚Â Still no pitch speed shown on the Goodyear Ballpark scoreboard. Fans all around me were asking about it. Seriously. This is the last game of my trip.

Notes from Reds vs. Mariners

Ã¢â‚¬Â¢Ã‚Â Rookie DavisÃ‚Â looked good in his 4.2 innings. Yes, Davis gave up a few extra-base hits. But he was throwing strikes (1 BB), striking out seven Seattle hitters including a bunch of major league players. He was the beneficiary of a tremendous defensive play by Adam Duvall, but also the victim of shoddy defense and a couple bloop singles. Only three of the seven runs he gave up were earned. Davis contributed on offense with a long home run to left field. 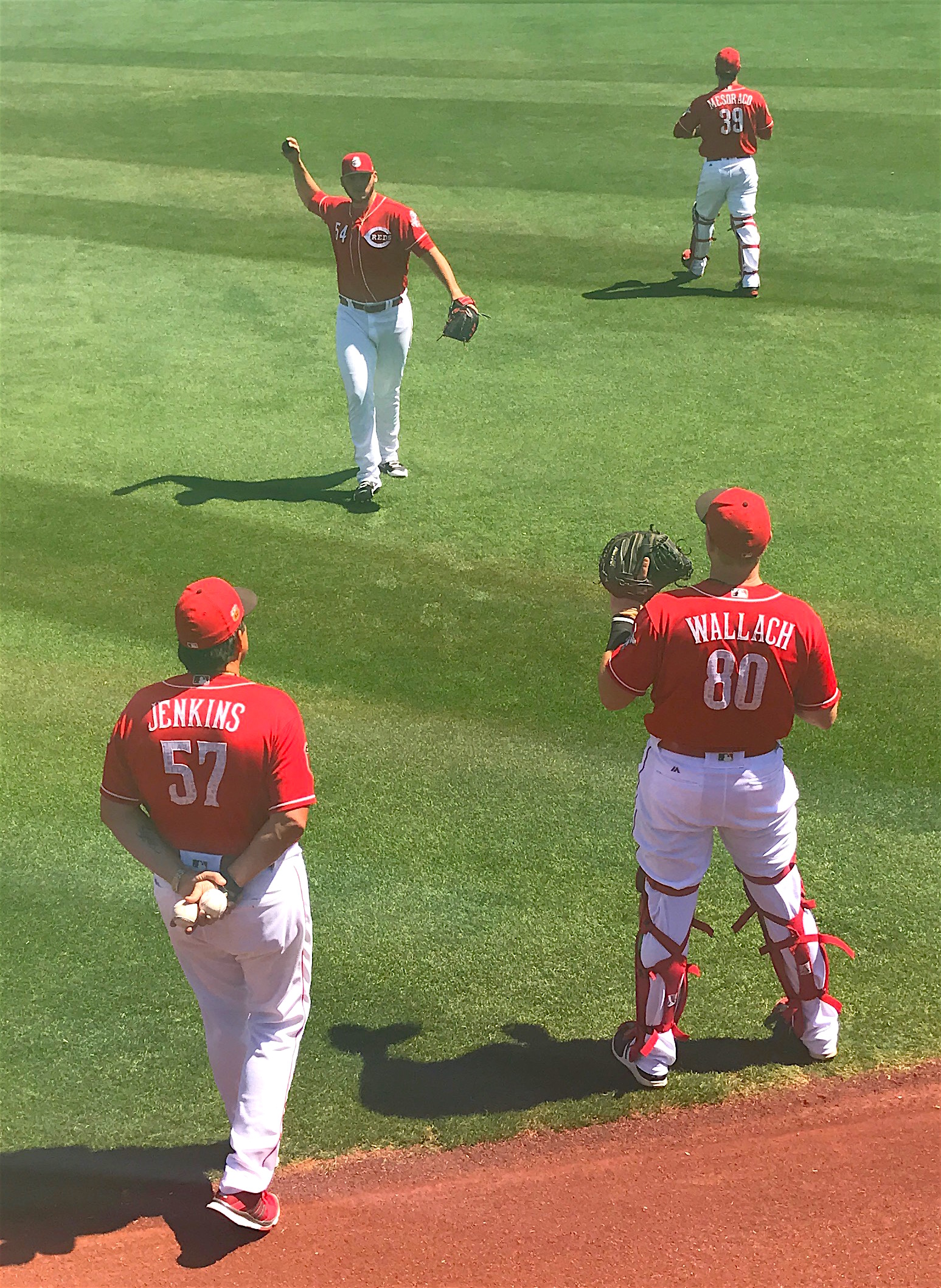 Ã¢â‚¬Â¢Ã‚Â Zack Cozart continued his strong spring with a long double to right-center, a walk and a superb defensive play deep in the hole at shortstop. This was his third day in a row playing and he stayed in through seven innings. 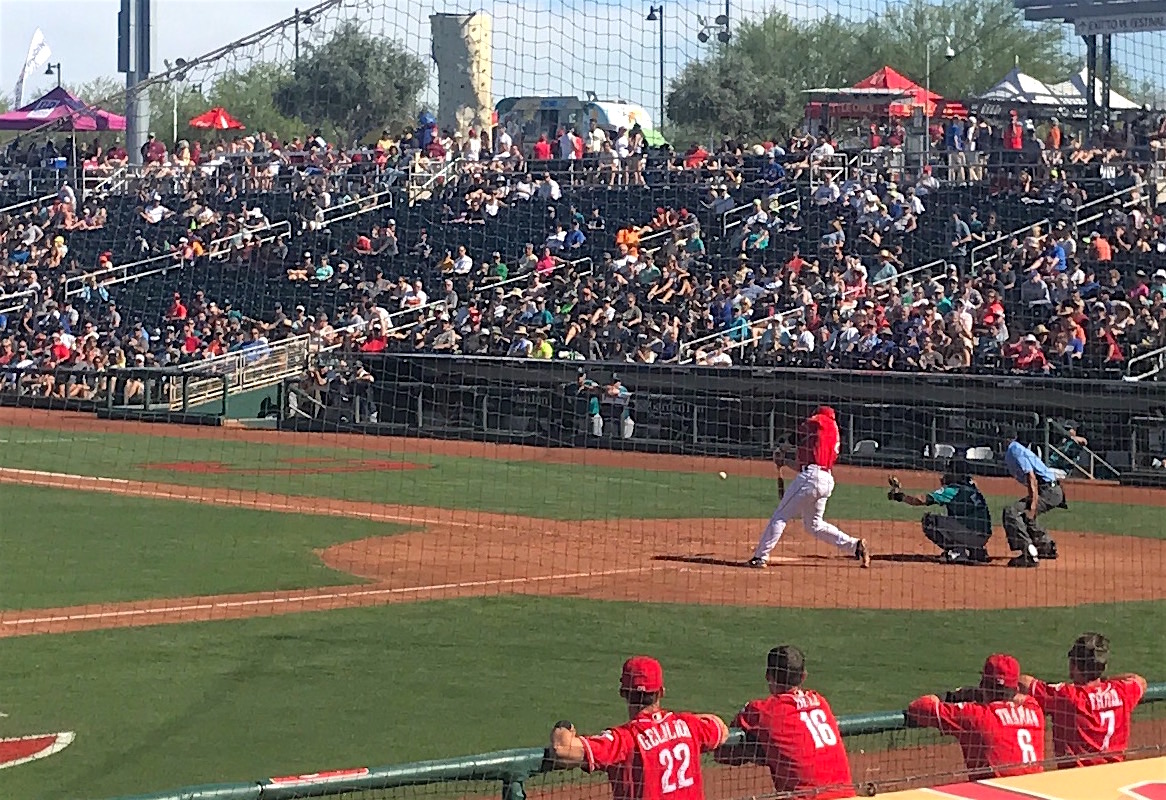 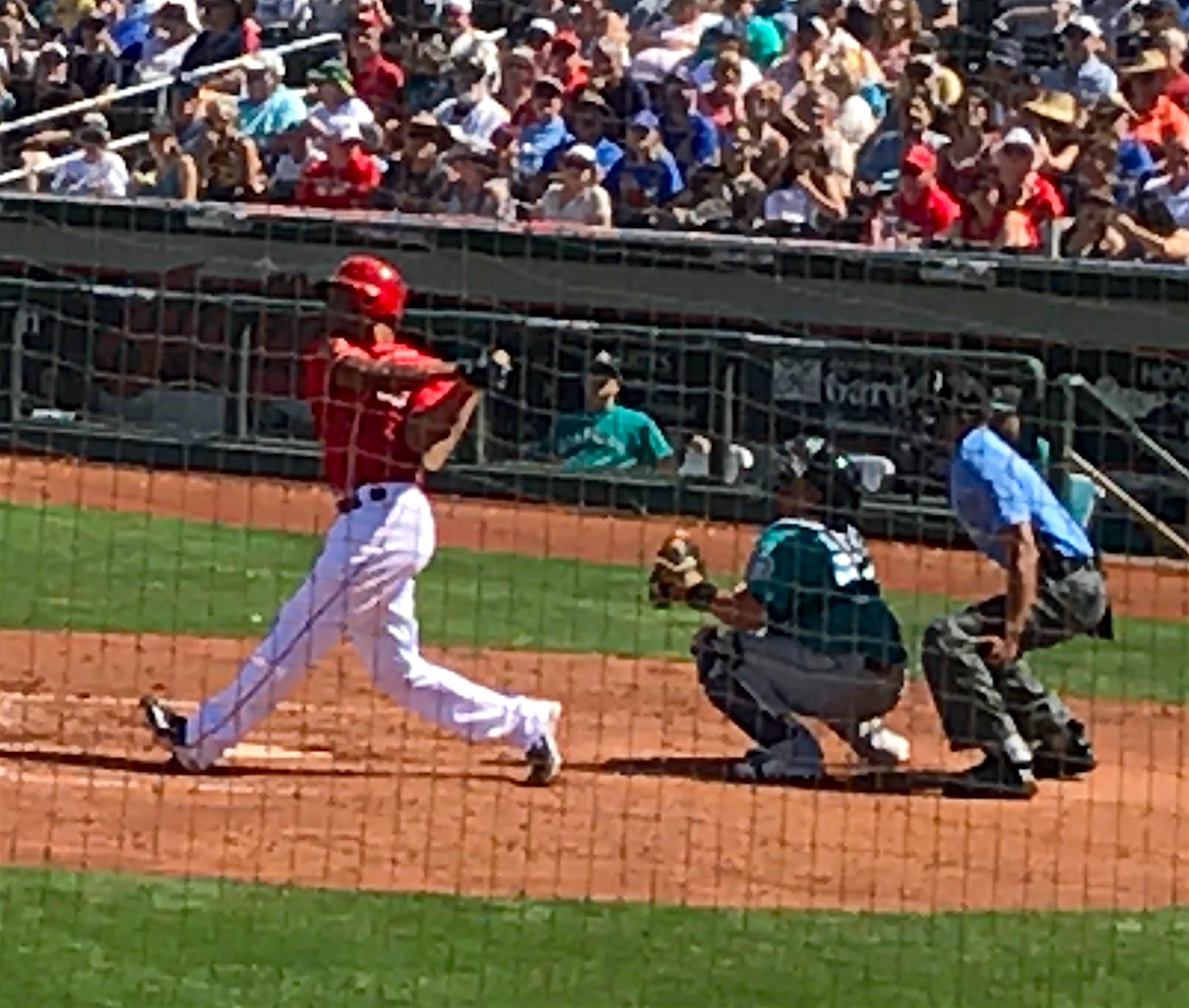 Ã¢â‚¬Â¢ Hernan Iribarren had two more bad infield throws. A couple days ago, he made wild throw to first on an easy play at 2B. Today, he tossed two routine throws past the 1B – one high, one way to the left – this time from 3B. Both errors came with two outs and runners scoring. Shaky, to say the least. 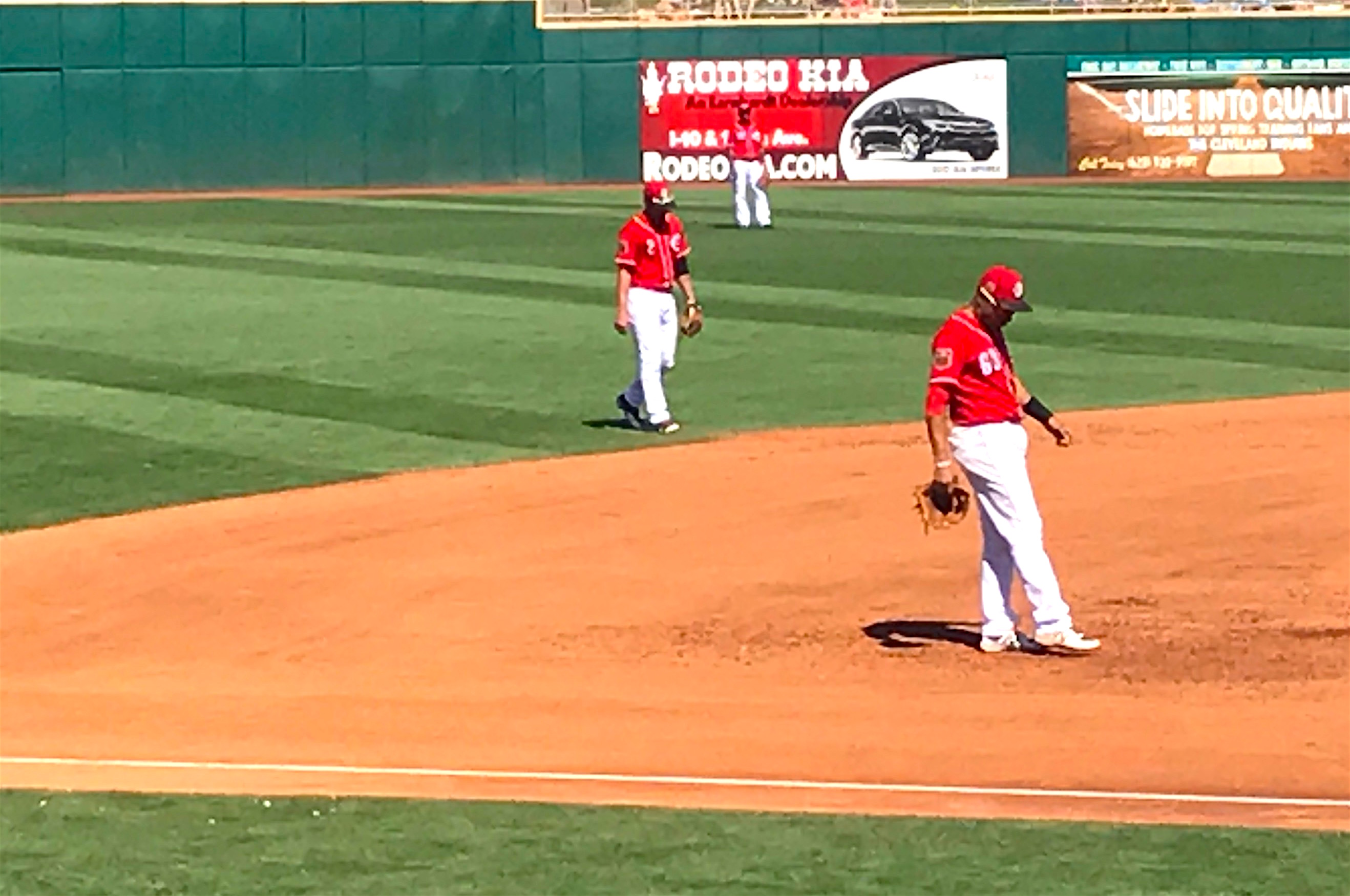 Hernan Iribarren after his second error of the day

Ã¢â‚¬Â¢ T.J. Friedl replaced Jennings in CF starting with the sixth inning. Friedl (5’10”, 170 lbs.) got an AB in the seventh, lining the ball down the first place line but it was stabbed by the Mariners’ first baseman on a great play. 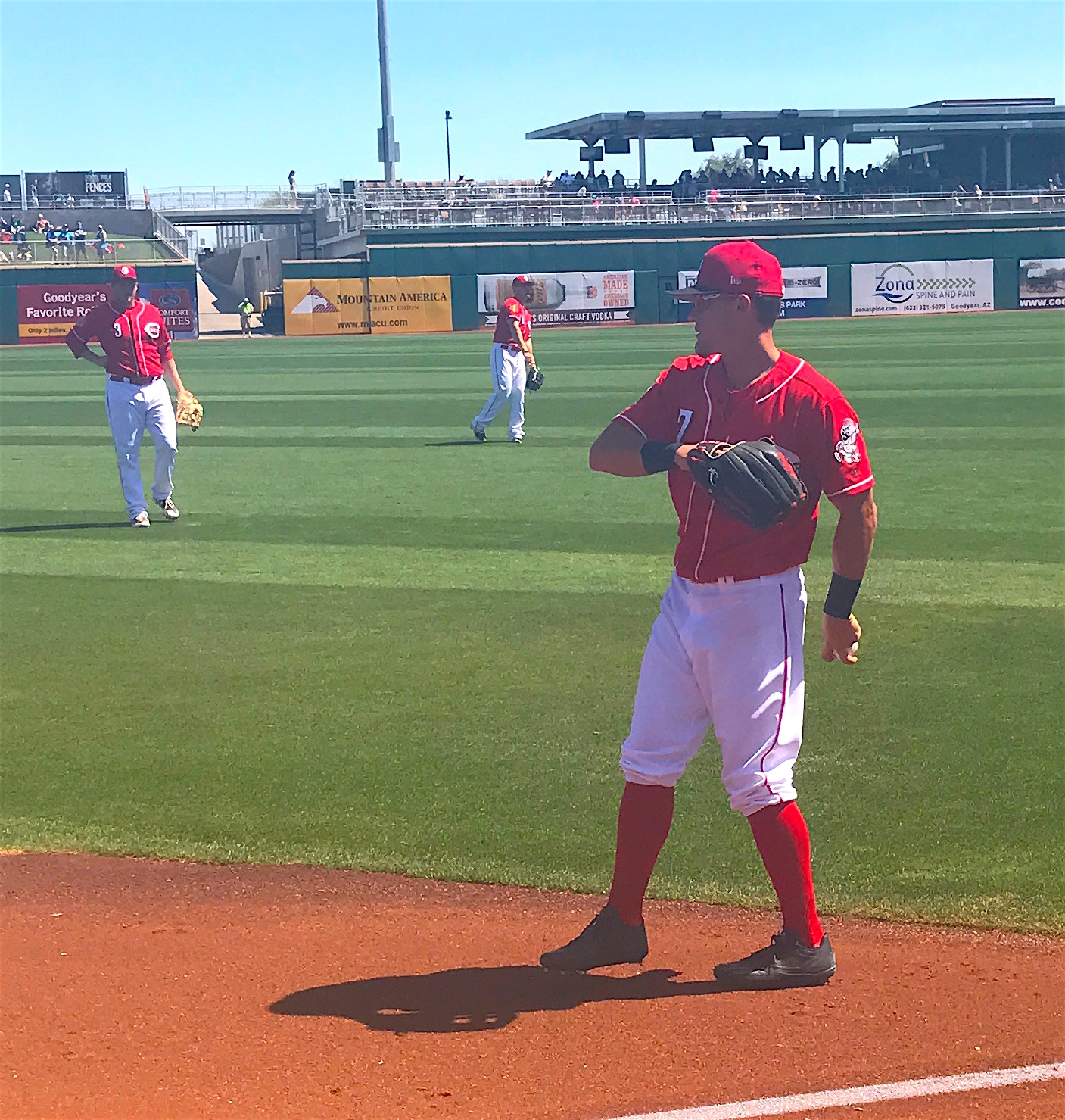 T.J. Friedl tossing before the game

Ã¢â‚¬Â¢ Defensive play of the game was an easy choice today. Adam Duvall leapt over the left field fence to grab a ball off the bat of Danny Valencia. Duvall made another nice play charging in, catching a fly ball and doubling a runner off first base.

Notes from Reds vs. Cubs in Vegas

These observations are based on reading the box score. I wasn’t at the game.

Ã¢â‚¬Â¢Ã‚Â Reds pitching gave up 21 earned runs. None by pitchers who will likely make the Opening Day roster. The only one with a chance is Tim Adelman, who started and gave up six runs in the first inning.

Ã¢â‚¬Â¢ Michael Lorenzen feels like he’s in too small of a box just being a reliever. Wants to be a two-way player. Reds are open to using him in more ways, like pinch hitting and running, but apparently not as a starting pitcher. Interesting article by Zach Buchanan of the Cincinnati Enquirer.Ã‚Â

Ã¢â‚¬Â¢ Raisel Iglesias, who hurt himself slipping in the shower, played catch yesterday. Homer Bailey will play catch for first time since his elbow surgery tomorrow. Both reports by Buchanan.

Ã¢â‚¬Â¢Ã‚Â Price says it is “unlikely” that Devin Mesoraco will make the Opening Day roster, “not enough time to build up,” reports Buchanan. That relates to the next piece of news.

Ã¢â‚¬Â¢Ã‚Â Reds are leaning toward keeping Stuart Turner, reportsÃ‚Â Buchanan. Turner is the Rule 5 catcher from the Minnesota Twins. If Turner doesn’t make the 25-man roster for Opening Day, the Reds have to offer him back to the Twins. Turner has been impressive this spring, particularly on defense. He would back up Tucker Barnhart if Mesoraco isn’t ready on April 3.