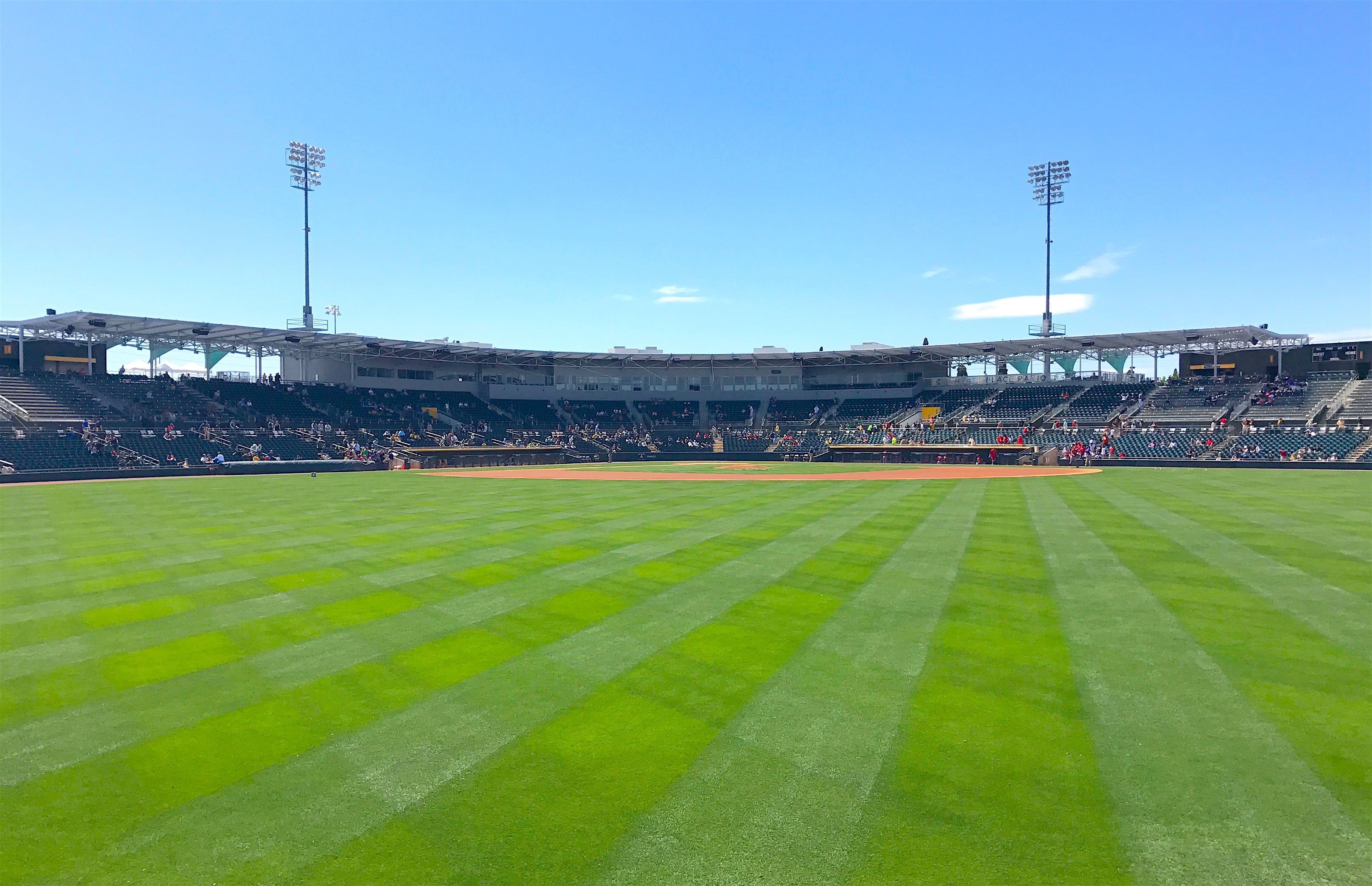 I’ve never been to Hohokam Stadium before. The Cubs played here through the 2013 season. Now the A’s have a 20-year contract. Hohokam takes its name from an ancient Native American tribe that occupied the region for more than 1,000 years. It’s a nice park in a residential neighborhood. $5 to park. No pitch speed on the scoreboard.

Notes from Reds vs. Oakland

Ã¢â‚¬Â¢Ã‚Â When Amir Garrett wasn’t getting hit really hard, he was missing the plate with his breaking ball. The radar guns (I was sitting between the Reds and A’s guns) had him at 91-92 mph with a top of 93 mph. The Reds spotted him a 6-1 lead and he eventually gave it up over 5 innings. At the plate, he got a good sacrifice bunt down the first time and doubled the second time. Part of Garrett being a good athlete is the ability to run fast. 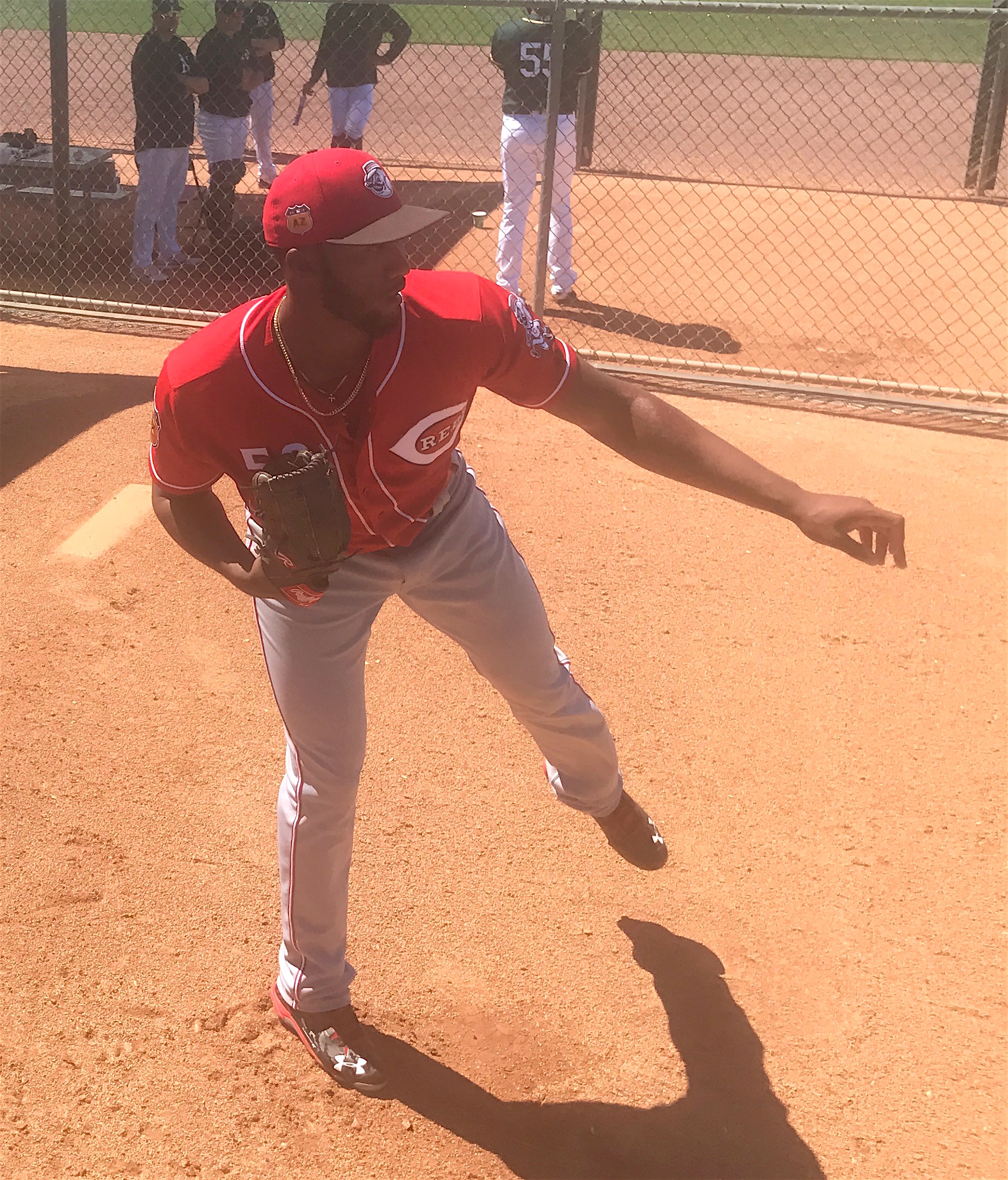 Ã¢â‚¬Â¢Ã‚Â Zack Cozart continues to swing the bat well. He walked to force in a run and then doubled down the left field line. Cozart played in back-to-back games and looks like normal Zack Cozart to me.

Ã¢â‚¬Â¢Ã‚Â Ryan Raburn had another hit and drew a walk. He played first base and air-mailed a throw to second after Garrett had a runner picked off. Easy play, bad throw. It’s going to be difficult to hide Raburn on the field. He provides value strictly as a hitter. We’ll have to see if that’s enough to make the roster.

Ã¢â‚¬Â¢Ã‚Â Jose Peraza had two hits. He hasn’t walked once in 57 plate appearances in spring training. I’d like him as a lead off hitter if it weren’t for that, because his hit tool is much better than Billy Hamilton’s. Peraza let a pop-up drop fair along the first base line. It was kind of in-between three Reds, but Peraza was there and basically let it drop. He sure is fast, though. Peraza tried to score from first on Cozart’s double and was thrown out on a close play at the plate. Without his speed, he’d have had no shot. Peraza’s strengths and weaknesses are becoming well defined. 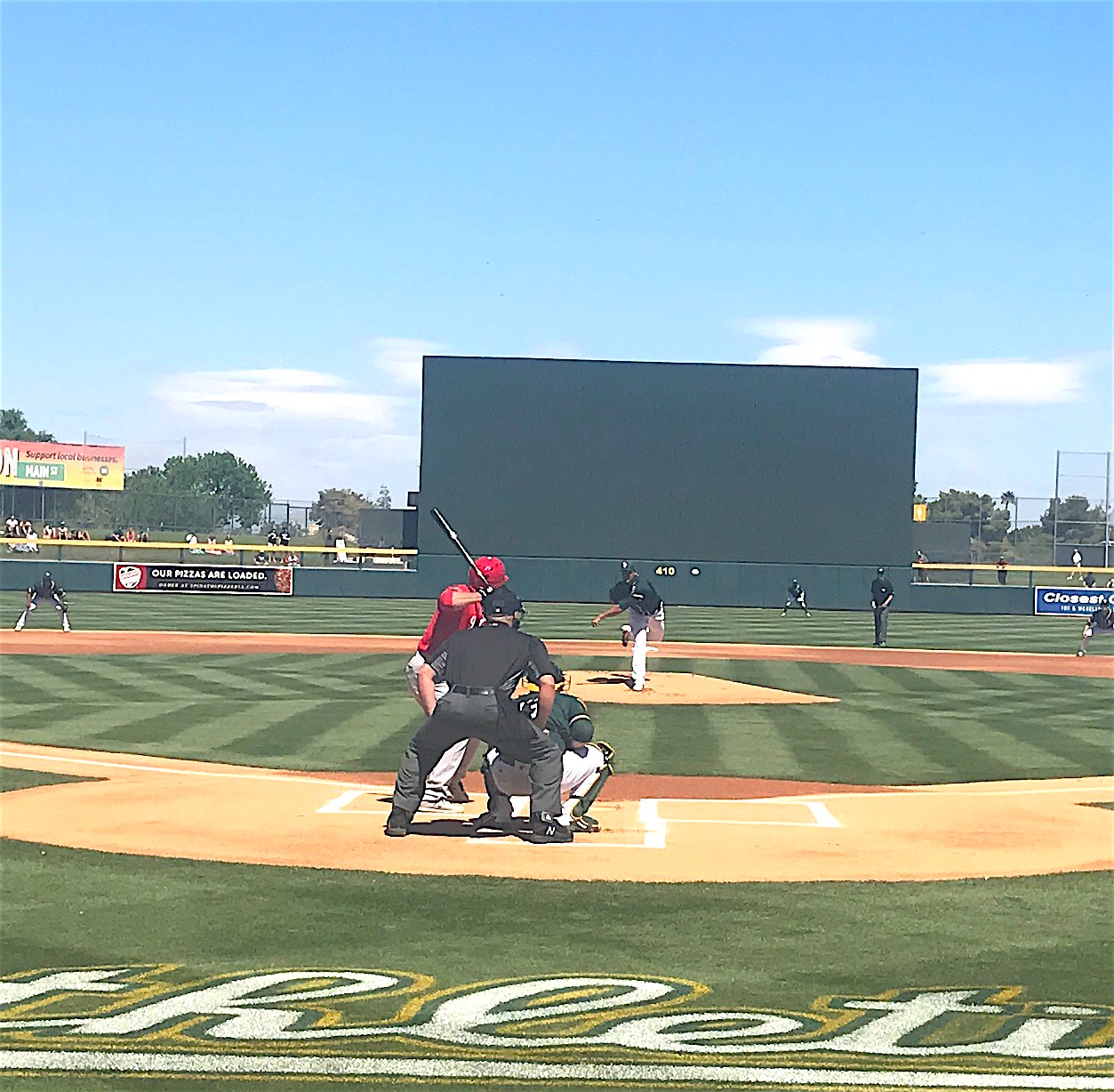 Ã¢â‚¬Â¢Ã‚Â I have mixed feelings about saying so many good things about Stuart Turner (Rule 5 catcher) because it’s going to be hard for the Reds to keep him. Turner threw a runner out at second base with a laser shot right on the bag. And today he contributed at the plate with a single to center and a bomb double into right centerfield. Turner’s double was against big league pitcher Sean Doolittle. 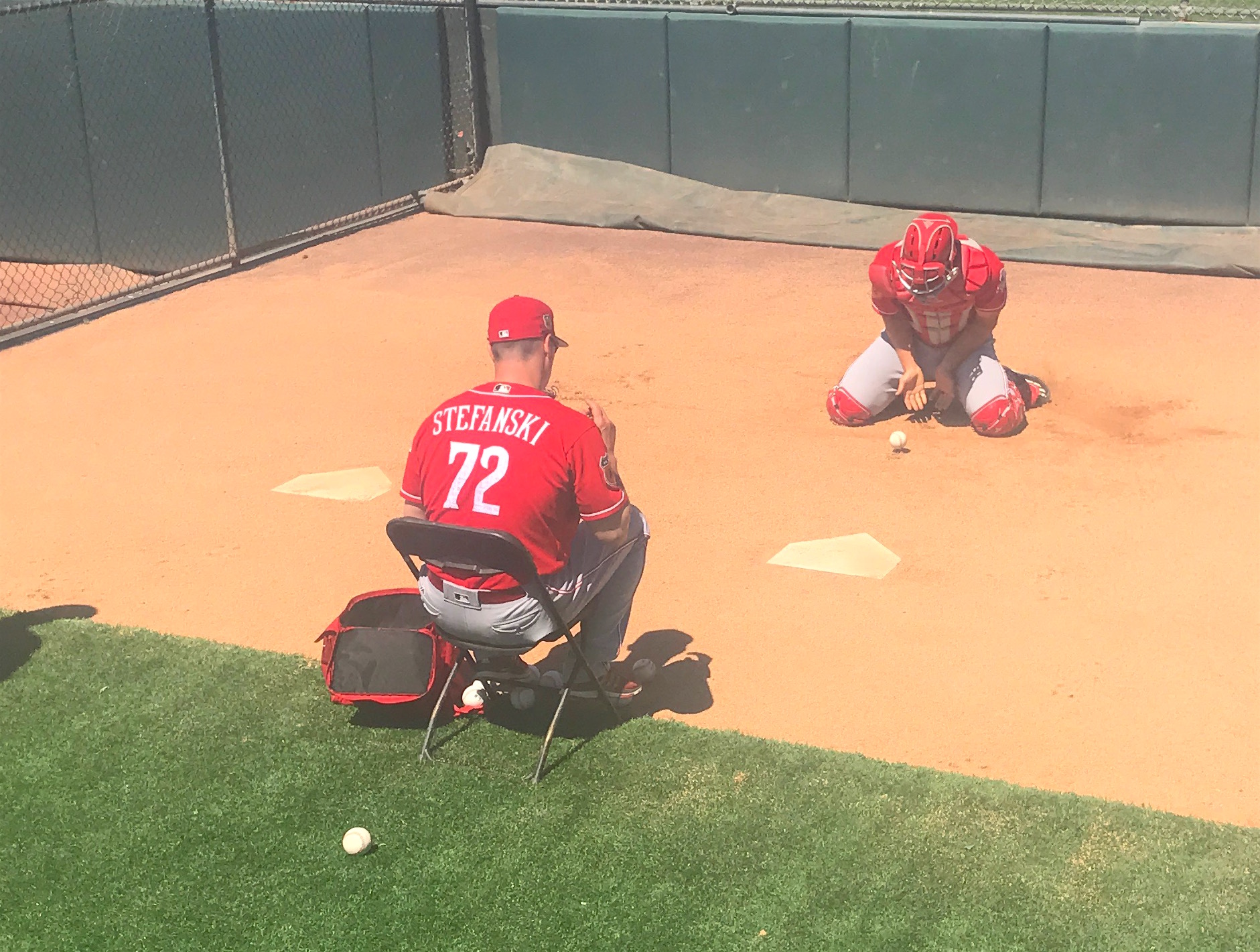 Stuart Turner practicing blocking the plate before the game

Ã¢â‚¬Â¢Ã‚Â Our own Tom Mitsoff wrote about Lucas Luetge, 30-year old reliever, this morning. Luetge (LIT-key) has pitched in 100+ games for the Seattle Mariners dating back to 2012. He didn’t pass the LOOGY test today, failing to retire (walk, walk, hit) the three lefty hitters he faced. Luetge was throwing a lot of breaking balls and having trouble getting strikes.

Ã¢â‚¬Â¢Ã‚Â Defensive play of the game goes to Scott Schebler, playing right field. Schebler raced into the deep right-center gap to make a catch that otherwise would have produced an extra-base hit. He made another nice play in the 5th inning.

Notes from Reds vs. Cubs

These comments are reactions to the stat line. The game was in Las Vegas and I wasn’t.

Ã¢â‚¬Â¢Ã‚Â Patrick Kivlehan got another hit – a triple – and walked. Consistent production from him.

Ã¢â‚¬Â¢Ã‚Â The good spring of Barrett Astin came crashing down. He gave up five hits and a walk in less than an inning of work.

Ã¢â‚¬Â¢Ã‚Â Billy Hamilton was 0-3. The hope that he’d continue the improvement from the last few weeks of the 2016 season hasn’t come to fruition. His approach is nothing like it was last August. Lots of pop-ups and fly balls.

Ã¢â‚¬Â¢Ã‚Â Arismendy Alcantara homered, giving him three for the spring. The power isn’t a surprise. He’s been double-digits for homers every year. One projection for 2017 says if he gets 500+ plate appearances, he’ll hit 17. Based on his career numbers, he also comes with a low batting average and below average walk rate, producing a sub .300 on base percentage. Don’t tell Chad Dotson that. Alcantara is 25.

Ã¢â‚¬Â¢Ã‚Â Dilson Herrera “has been taking grounders and throwing across the diamond for the last four days,” tweets Zach Buchanan. Herrera has been hitting well in minor league games from the DH slot, according to Doug Gray.

“As Price points out, Storen isnÃ¢â‚¬â„¢t being asked to close with the Reds like he was for much of his career with the Washington Nationals.”

I get that Price is planning on a closer committee. But right now, it’s a committee of one or two. Raisel Iglesias is recovering from shower-related injuries. Apparently Drew Storen won’t carry a closer load. That leaves Michael Lorenzen, Tony Cingrani and maybe Blake Wood. Perhaps Iglesias will be ready for duty by Opening Day.