I move around to different seats during the game. In one location I sat in front of two loud know-it-alls. They covered the entire gamut of mistakes by the Reds. Bailey, Cueto, Bruce, etc. Well, they finally got around to attacking Joey Votto. “You know ever since he signed that contract, he’s been OK but not great. Don’t tell me about O-B-P. Don’t tell me about that. I don’t care about Oh-Bee-Pee. And don’t tell Chad Dotson about that.” Just then the guy’s phone rang and he didn’t return to our fearless leader as a topic of conversation. I told Chad, the only thing worse than people talking about you is people not talking about you.

Notes from Reds vs. BrewersÃ‚Â

Ã¢â‚¬Â¢ Sal Romano started today, possibly pitching for a spot on the Opening Day roster. When he was warming up before the game, ten Reds pitchers (including Homer Bailey) sat in the small pitching area of the bullpen. I’ve never seen that before and I checked with housemate Doug Gray just now and he hasn’t either. 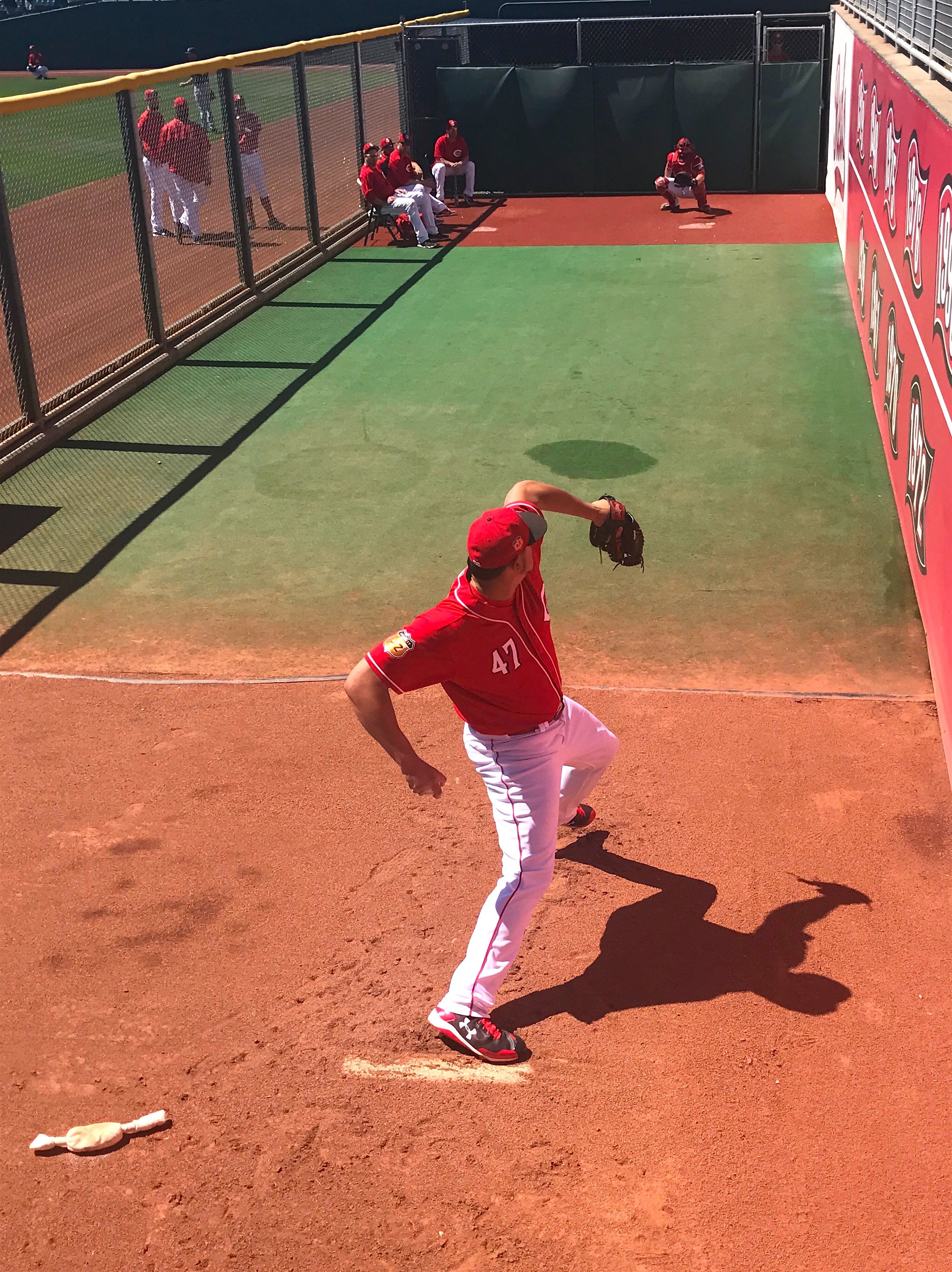 Romano warming up before the game

There’s no way to sugar coat Romano’s day. He was hit hard and often. If you’re looking for silver linings amid the overcast skies, Romano didn’t walk anyone and he struck out six Brewers. Milwaukee played mostly big leaguers. Romano isn’t afraid to throw inside. The Reds defense didn’t help in the 5-run second inning, but the Earned Runs in the box score don’t matter. Getting hit hard matters. Romano had his good innings – he struck out the side in the first inning. But this outing didn’t strengthen his case.

Ã¢â‚¬Â¢ Patrick Kivlehan had two strong hits and the out he made was sharp fly ball into the right field corner that produced a run. He has good speed. The idea of him making the OD roster as a utility player is growing on me. Kivlehan is 27 and can play 3B, 1B and OF. The Reds picked him up off of waivers last September.

Patrick Kivlehan in the dugout after hit and run scored

Ã¢â‚¬Â¢ Devin Mesoraco caught five innings. He looks perfectly fine catching. His timing at the plate remains inconsistent. Mesoraco looks a lot better on fastballs than he does against breaking balls or off-speed pitches. He hit a line drive single and made several strong defensive throws to bases. 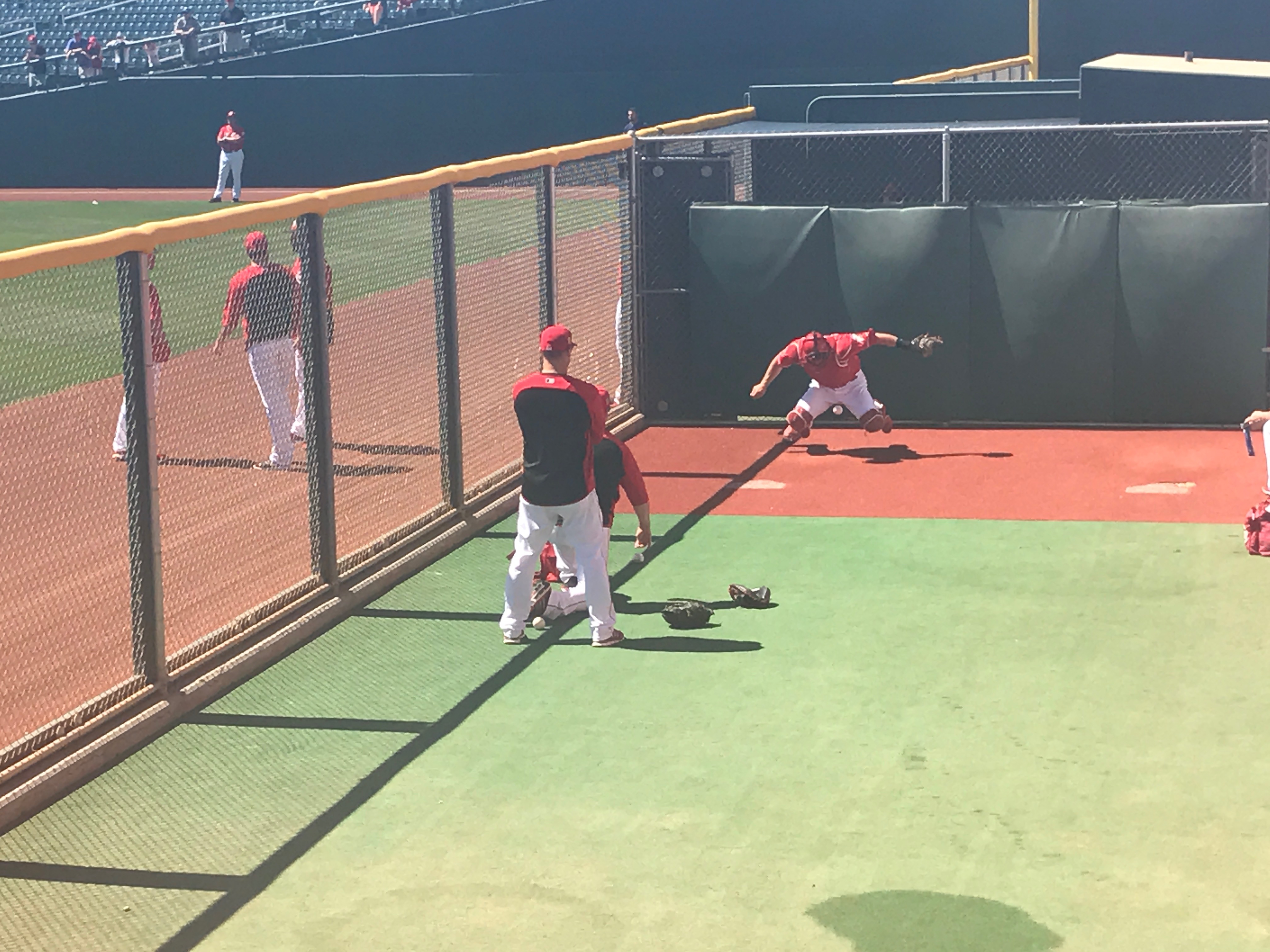 Devin Mesoraco mid-air working on blocking balls before the game

Ã¢â‚¬Â¢ Eugenio Suarez has been the most consistent player on offense and defense. Suarez hit the ball hard again today and made a couple nice defensive plays at 3B. Suarez has the best arm among the major league players and others I’ve seen this week.

Ã¢â‚¬Â¢ Zack Cozart had three hits, including a home run on the first pitch he saw in the first inning. He’s looked like Zack Cozart on defense, too, a bad flip to second base today notwithstanding.

Ã¢â‚¬Â¢ Scott Schebler had a couple shaky plays in centerfield. He’s looked decent-to-good at the plate, but it’s worth remembering that CF is not his regular position. It’s a stretch to play him there. Schebler had a two-run single and a walk today.

Ã¢â‚¬Â¢ Finally got to see Michael Lorenzen and Drew Storen pitch. Neither one looked particularly sharp, especially Storen. According to Zach Buchanan, a scout said Storen was 88-90 on the radar gun, which isn’t where he needs to be. Lorenzen got on base on a fielders choice. He stole second. It’s a shame his athleticism is wasted being a bullpen pitcher. 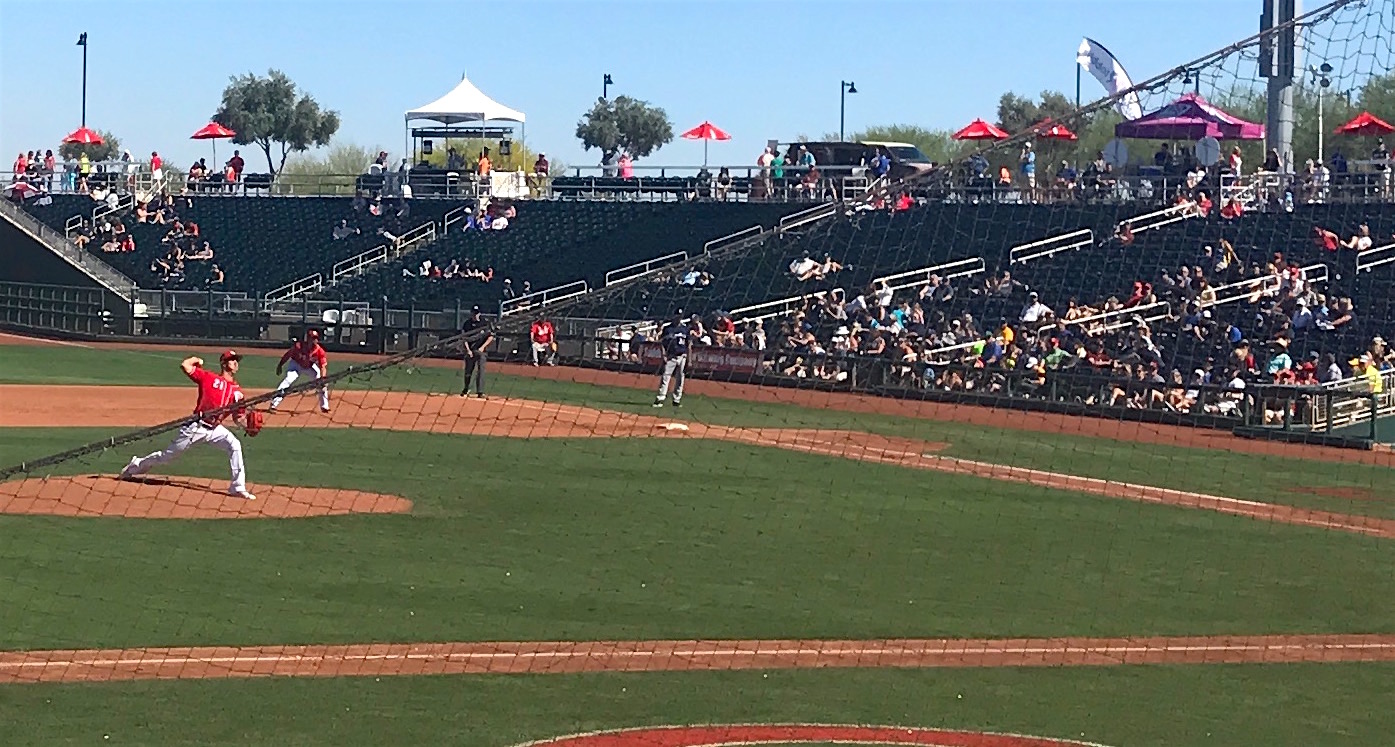 Ã¢â‚¬Â¢ The youngsters got in the game the final three innings. In Nick Senzel’sÃ‚Â (3B) at bat, he was jammed and broke his bat but was strong enough to keep the ball fair and it rolled down the third base line for a double. He also made a routine play in the field. Shed LongÃ‚Â (2B) made two good plays in the field, but whiffed on a hard hit ball up the middle. 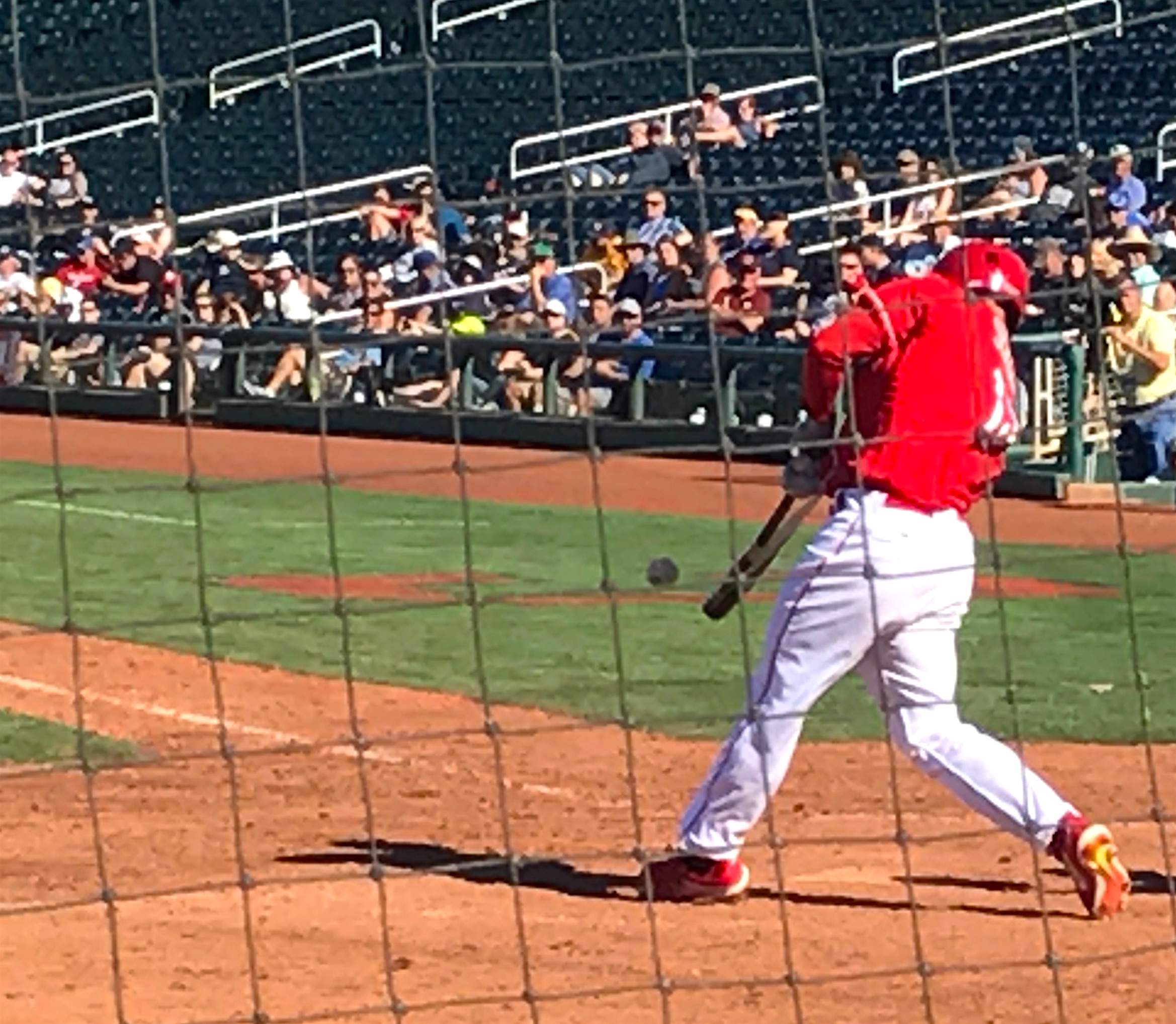 Ã¢â‚¬Â¢ The defensive play of the game was by Brandon Dixon (25). Playing 2B, he ranged far to his left, diving to field a ground ball, recovering and getting the out at first. He also had two doubles. Dixon was acquired from the Dodgers in the Todd Frazier trade.

Ã¢â‚¬Â¢ Raisel Iglesias was healthy enough to catch the ceremonial first pitch from a 10-year-old. 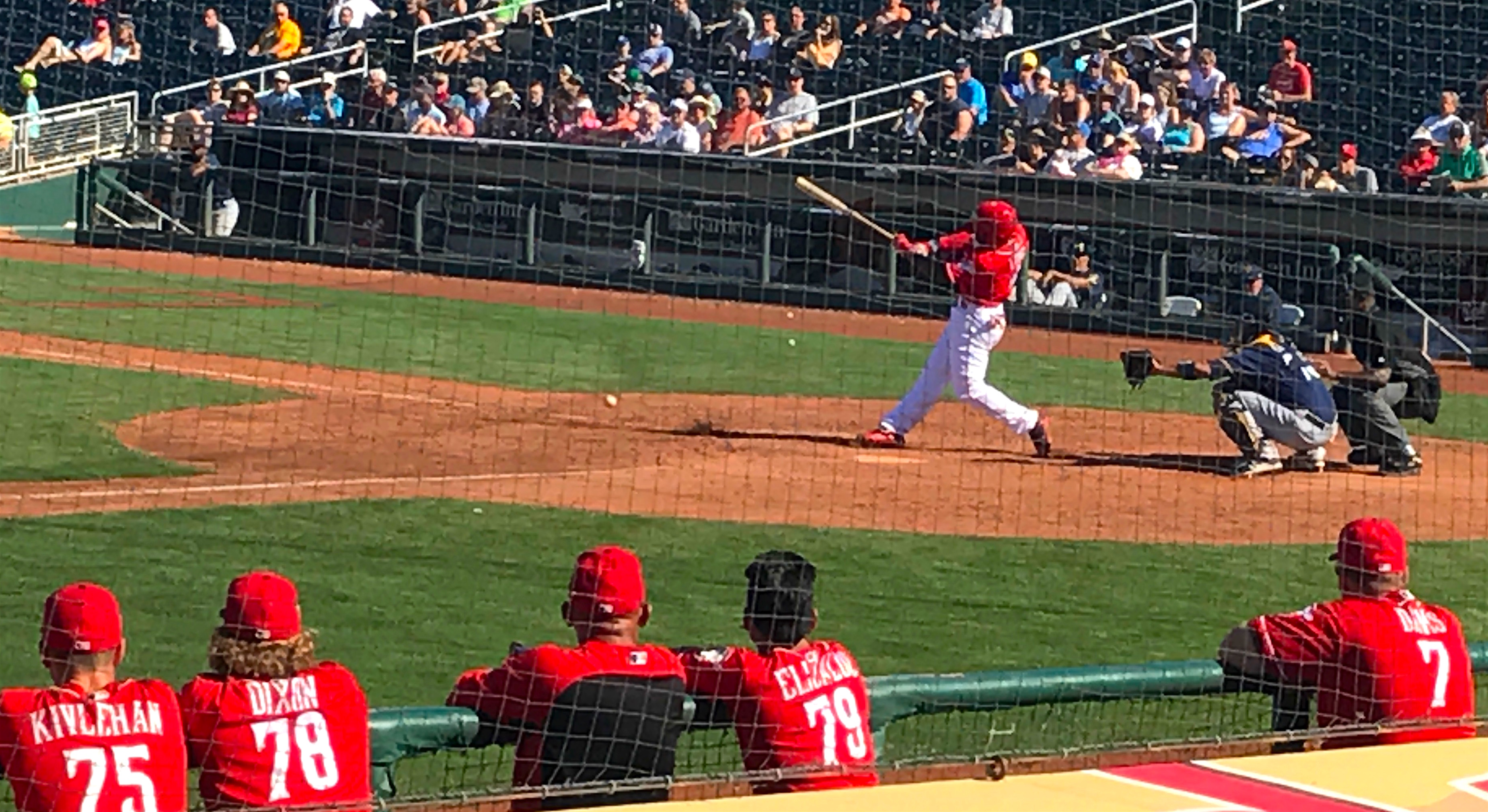 I left after the bottom of the 8th and missed the fireworks in the ninth. The Reds gave up three runs to fall behind 11-10 but then came back to win 12-11. T.J. FriedlÃ‚Â (21) led of with a single. Reydel Medina followed with a hit and Shed LongÃ‚Â (21) walked. With two outs, Arismendy Alcantra (25) doubled to deep center, plating two runs. Reds win!