The Reds B-team made the trip this afternoon to Camelback Ranch to play the Chicago White Sox. The Camelback Ranch facility is gorgeous and shared by the White Sox and Dodgers and about 20 minutes north of Goodyear Ballpark. 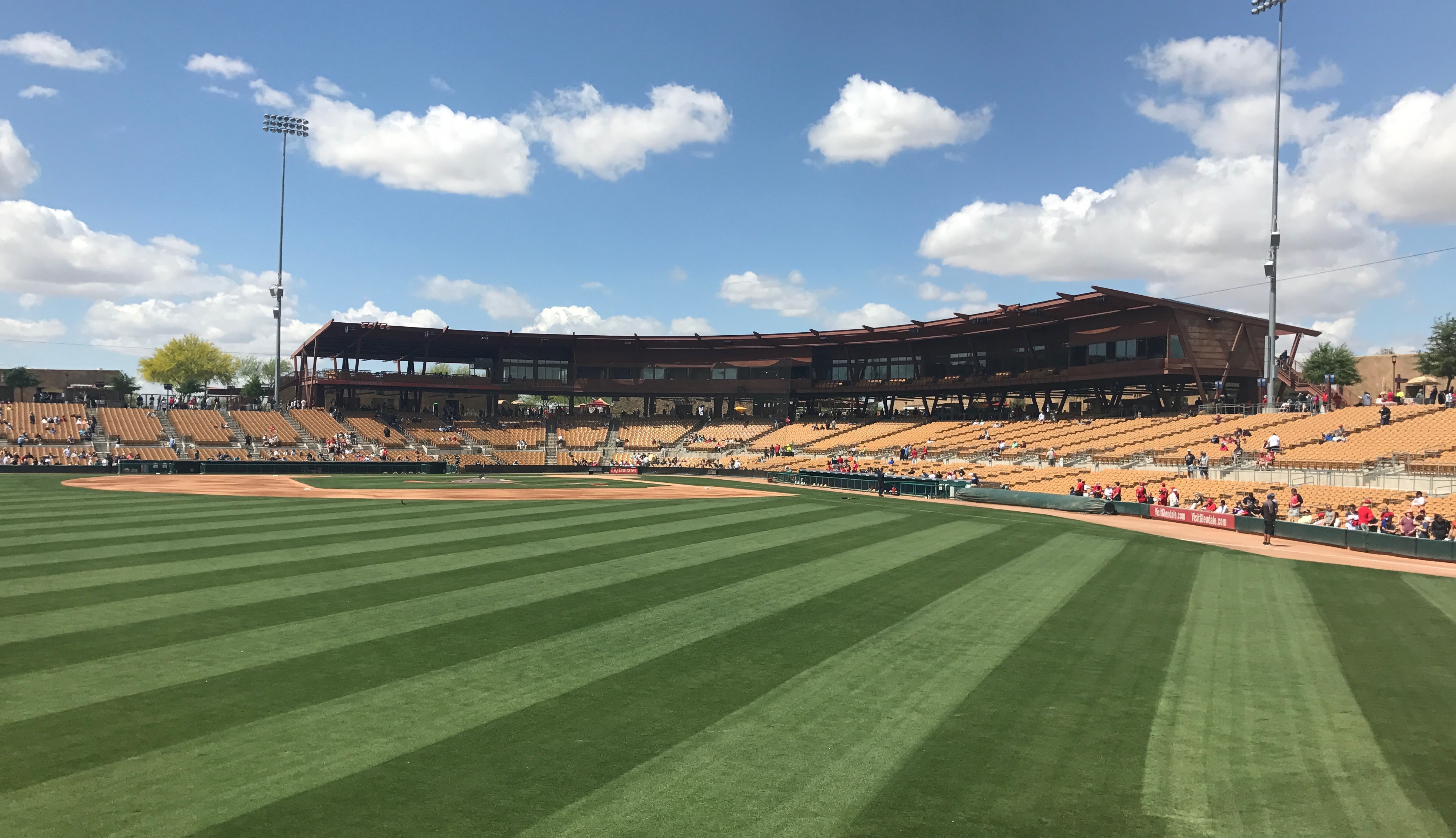 In a welcome development, last night’s storm that shortened the game with the Cubs brought much cooler weather, with temperatures in the low 70s. It was a beautiful day. Camelback Ranch: Free parking – check; Free program – check; Pitch speed on scoreboard – fail.

Notes from Reds vs. White Sox

Ã¢â‚¬Â¢ Bronson Arroyo pitched four innings. The White Sox started to hit him better the second time through the lineup. That’s when he gave up the 2-run homer. But overall, Arroyo held them in check. I had a chance to interact with him before the game. I was on the centerfield lawn taking a picture and Bronson was warming up running in front of me. It was basically the two of us and he looked up and I said “Don’t forget to duck this time.” He laughed and said “That wasn’t the problem. I ducked right into it.” 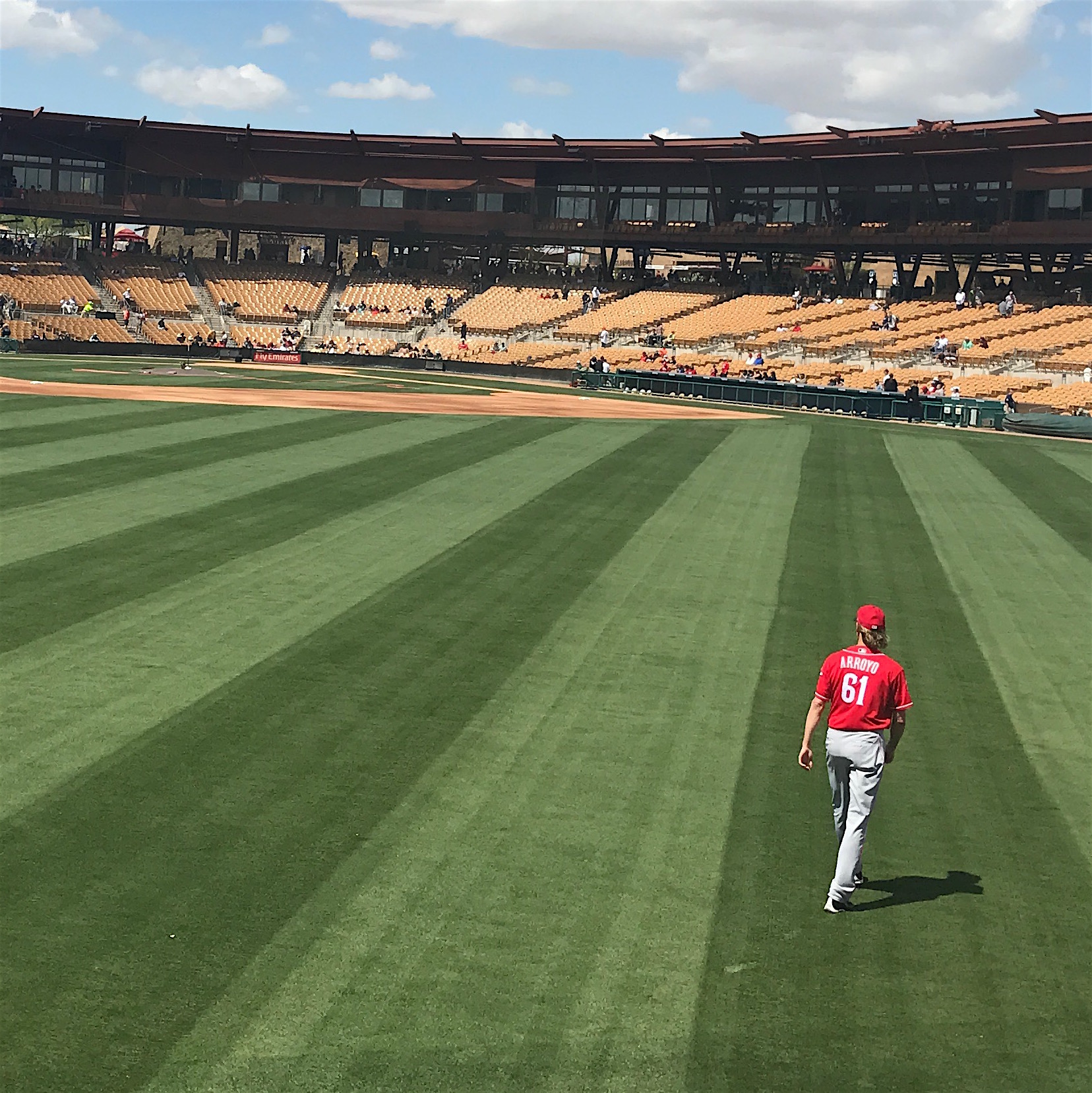 Bronson Arroyo running before his start

Ã¢â‚¬Â¢ Billy Hamilton was back in the lineup after sitting out for four days with a sore Achilles tendon. Hamilton DH’d, hit lead-off and made two easy outs, a pop-up and high fly ball.

Ã¢â‚¬Â¢ Todd Frazier played 3B for the White Sox. Arroyo got him out twice, on a pop-up to the SS and a strikeout. Frazier’s walk-up music is still Frank Sinatra’s “Fly Me To the Moon.” 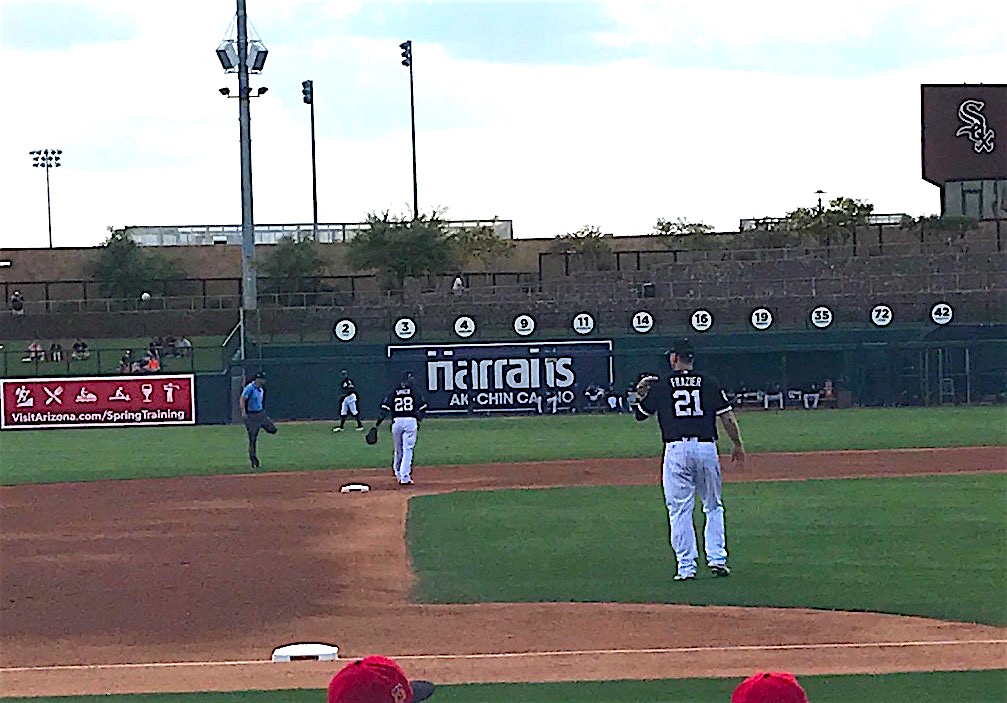 Ã¢â‚¬Â¢ Jose Peraza, who the Reds acquired in the Frazier trade,Ã‚Â played SS. He had several opportunities and made them all. One was particularly difficult, a ground ball hit deep in the hole at short. He fielded it and made the throw to 1B, beating the runner. My sense was his arm is average, not as strong as Zack Cozart’s. He also made a nice play charging a ground ball. On the downside, he was picked off first base as a runner. That happened to him several times last year. 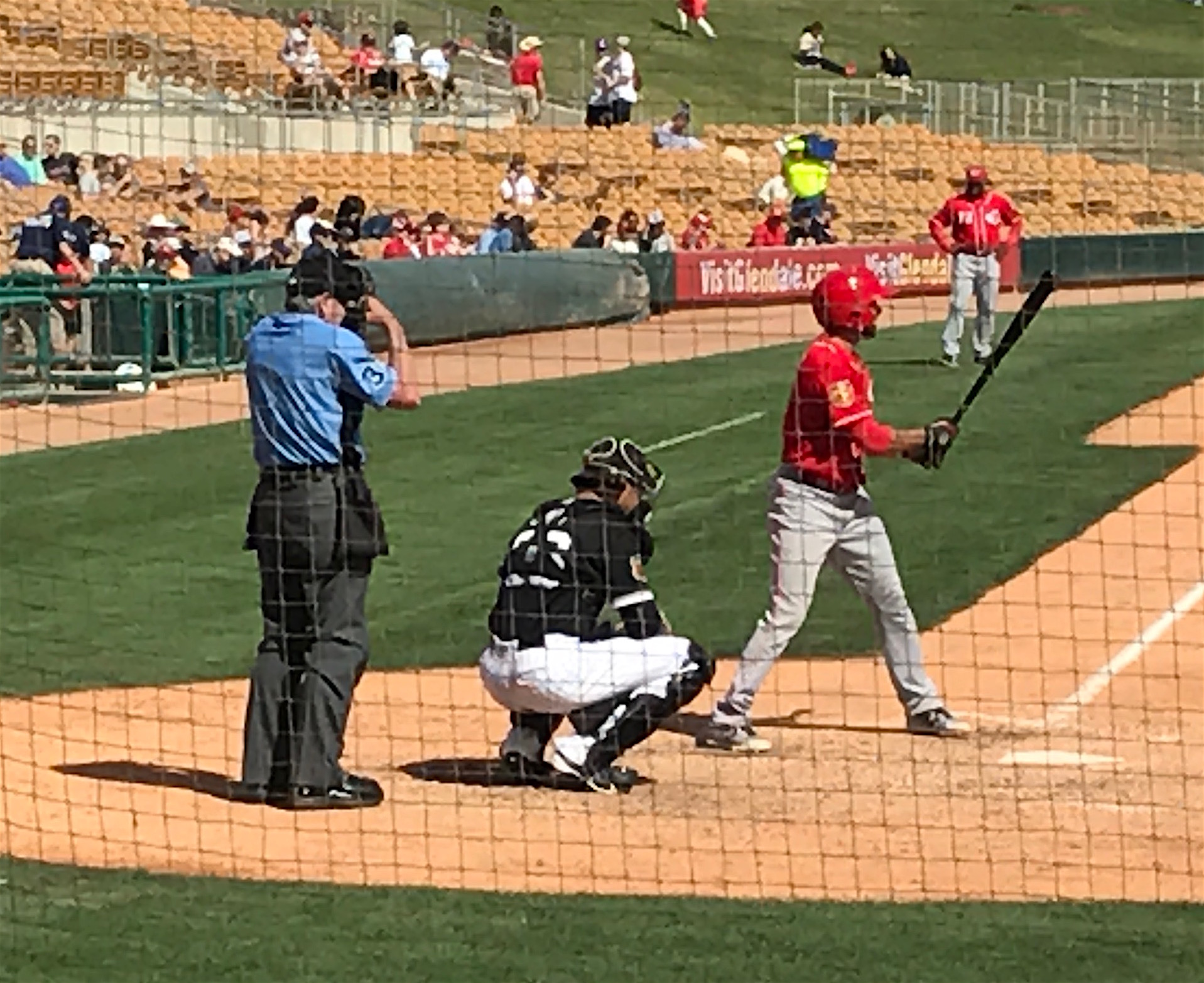 Jose Peraza at the plate

Ã¢â‚¬Â¢ Fans, particularly Red Sox fans, used to make fun of Derek Jeter by mocking the number of times the broadcaster said “just out of the reach of a diving Derek Jeter” implicitly criticizing the Yankee SS’s range. That came to mind twice watchingÃ‚Â Arismendy AlcÃƒÂ¡ntara this week.Ã‚Â Today, playing 2B, he didn’t get to a ground ball, a play it looked like he should make. If I were on the borderline of making a major league roster, I would have dove for it.

Ã¢â‚¬Â¢ Ryan Raburn may make the team, but if he does, it will fly in the face of all the talk we’ve heard about choosing players that offer a lot of flexibility. Raburn played RF today and not only looked lead-footed, he didn’t get good reads on a couple balls. It’s hard to imagine him contributing in any way other than as a power bat off the bench. That would be the opposite of the organization’s stated goals for bench players.

Ã¢â‚¬Â¢Ã‚Â Get me a front row seatÃ‚Â on the Taylor Trammell bandwagon, at least for a day. The 19-year-old (!) draft pick played the final three innings and was a standout. In his one AB, he launched a long, opposite field hit over the left fielders head. It was scored as a single because Stuart Turner was running in front of him and didn’t break on the hit. Without Stuart in the way, that’s a double or triple for the speedy Trammell. Also, Trammell made an outstanding defensive play (details below). Reminder that Trammell was a standout high school football player in Georgia. He’s not skinny like Billy Hamilton. He’s built solid. Athletic. More than speed. Lots of promise. 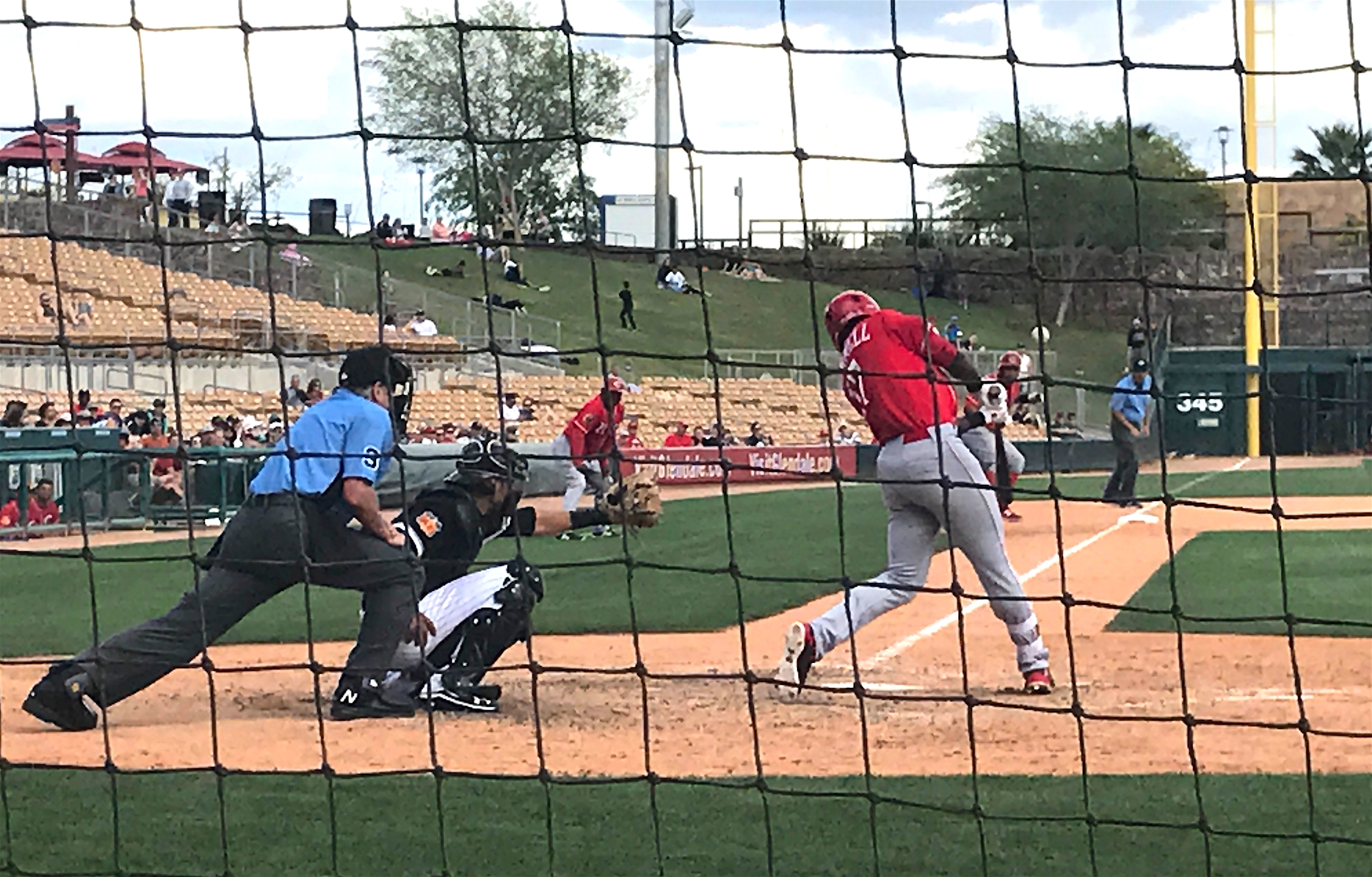 Ã¢â‚¬Â¢ A couple other minor leaguers got in the game. Eric Jagielo (Chapman trade) played 1B and got a single. Alfredo Rodriguez (Cuba) played SS and easily converted the one play he had. Both Jagielo and Trammell got their hits off Zack Birdi, the White Sox #1 pick last year who features a triple-digit fastball.

Ã¢â‚¬Â¢ Barrett Astin gave up a walk and ground-ball single, but his sinker was causing the White Sox bats – major league players – to pound the ball into the ground. Just sayin’. Blake Wood and Tony Cingrani pitched.

Ã¢â‚¬Â¢ Defensive play of the game goes to Taylor Trammell, who charged and dove forward on a line drive to CF, recording the third out of the 8th inning with runners on base. Trammell covered a lot of ground and had quick reaction. Honorable mention to Jose Peraza’s play mentioned above.

Ã¢â‚¬Â¢ Heard a rumor that in light of the report about the injuries Raisel Iglesias sustained to his hip and back, the Reds are investing in the latest no-slip technologyÃ‚Â and will provide it to all players.

Ã¢â‚¬Â¢ As promised, picture from Matt’s Big Breakfast this morning. 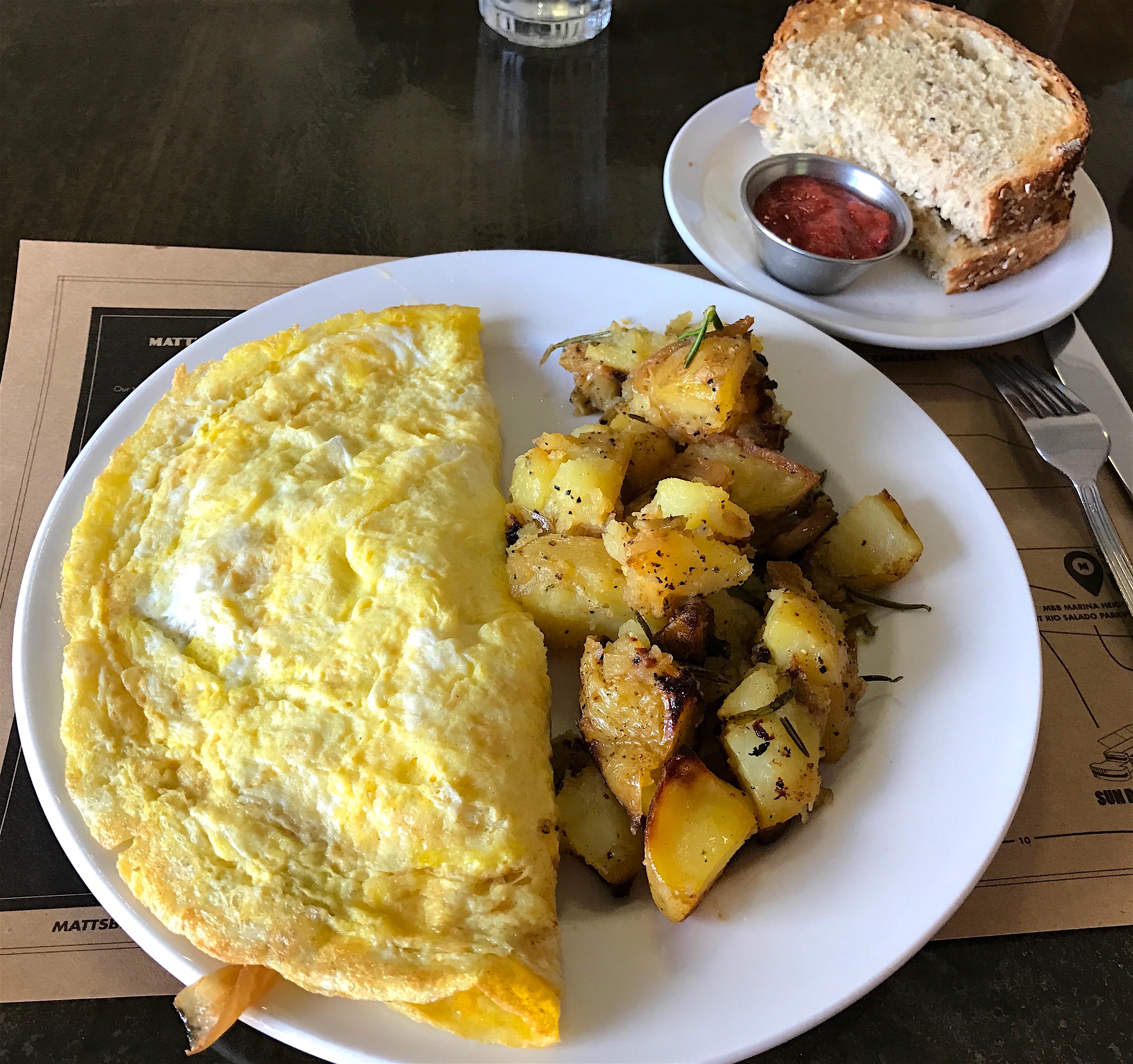