The Reds played the world champion Chicago Cubs last night at Goodyear Ballpark. Because the major league game was at night, I took in the AA-minor league game at 1 p.m. The weather was much cooler and overcast.

Notes from the AA-game against the Dodgers

Ã¢â‚¬Â¢ It would be hard to overstate how dominating Luis Castillo (Straily trade) was today. I stood behind the Reds and Dodgers radar guns and they had Castillo at 97 mph all day, occasionally higher. He had great control working his way through the AA Dodgers. What made him especially dominant was the control he had over his off-speed pitch (80-83 mph). No walks, lots of strikeouts, many weak ground balls and pop-ups. He has a long way to go, but Castillo may end up being the best acquisition of the rebuild. For Dan Straily. 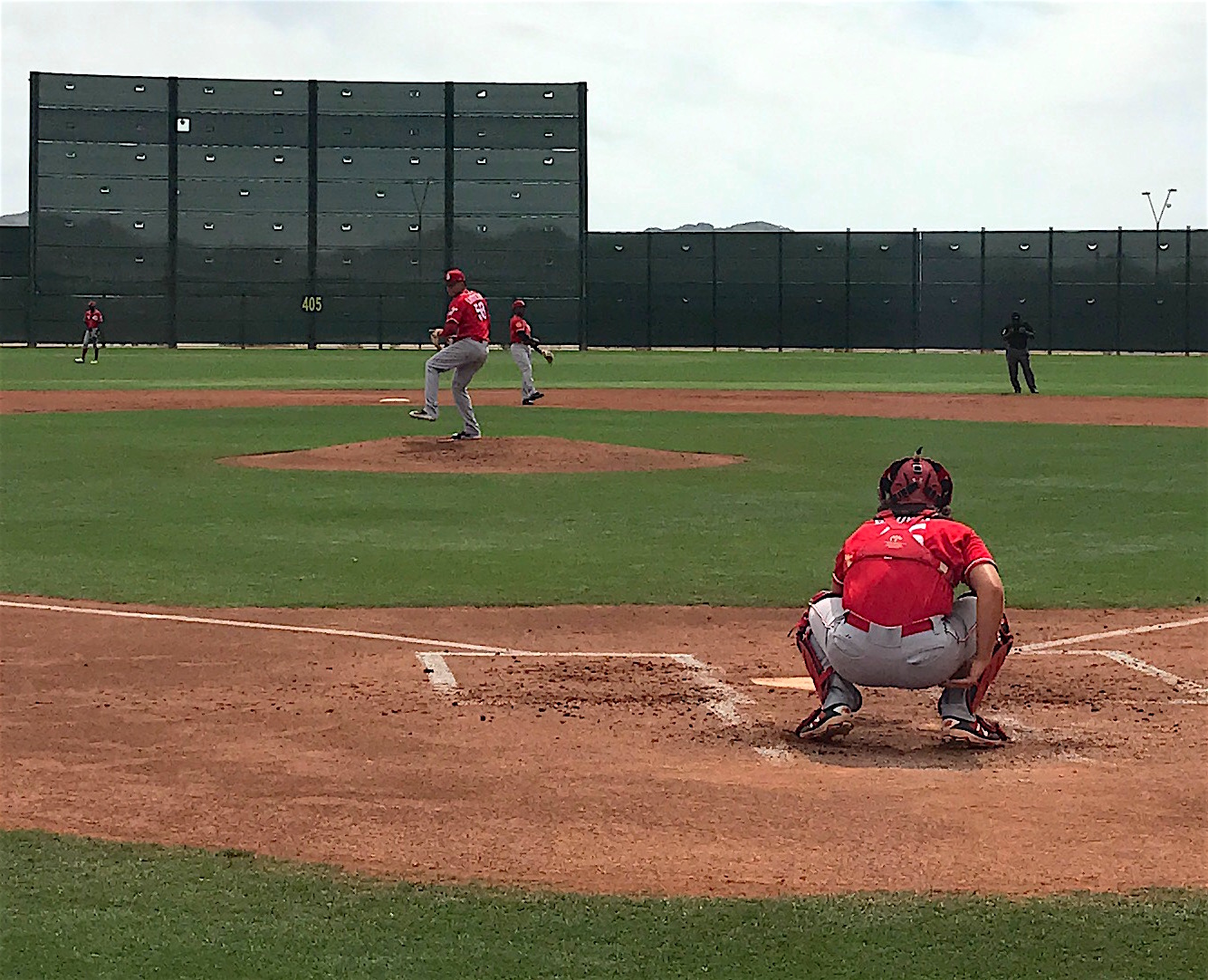 Ã¢â‚¬Â¢ Nick Senzel, batting third, hit a towering fly ball to the deepest part of right-center, but it was hauled in on a great catch. Over the four innings I watched, he had three routine plays at 3B. He completed two of them. On one, he threw the ball well over the 1B head. 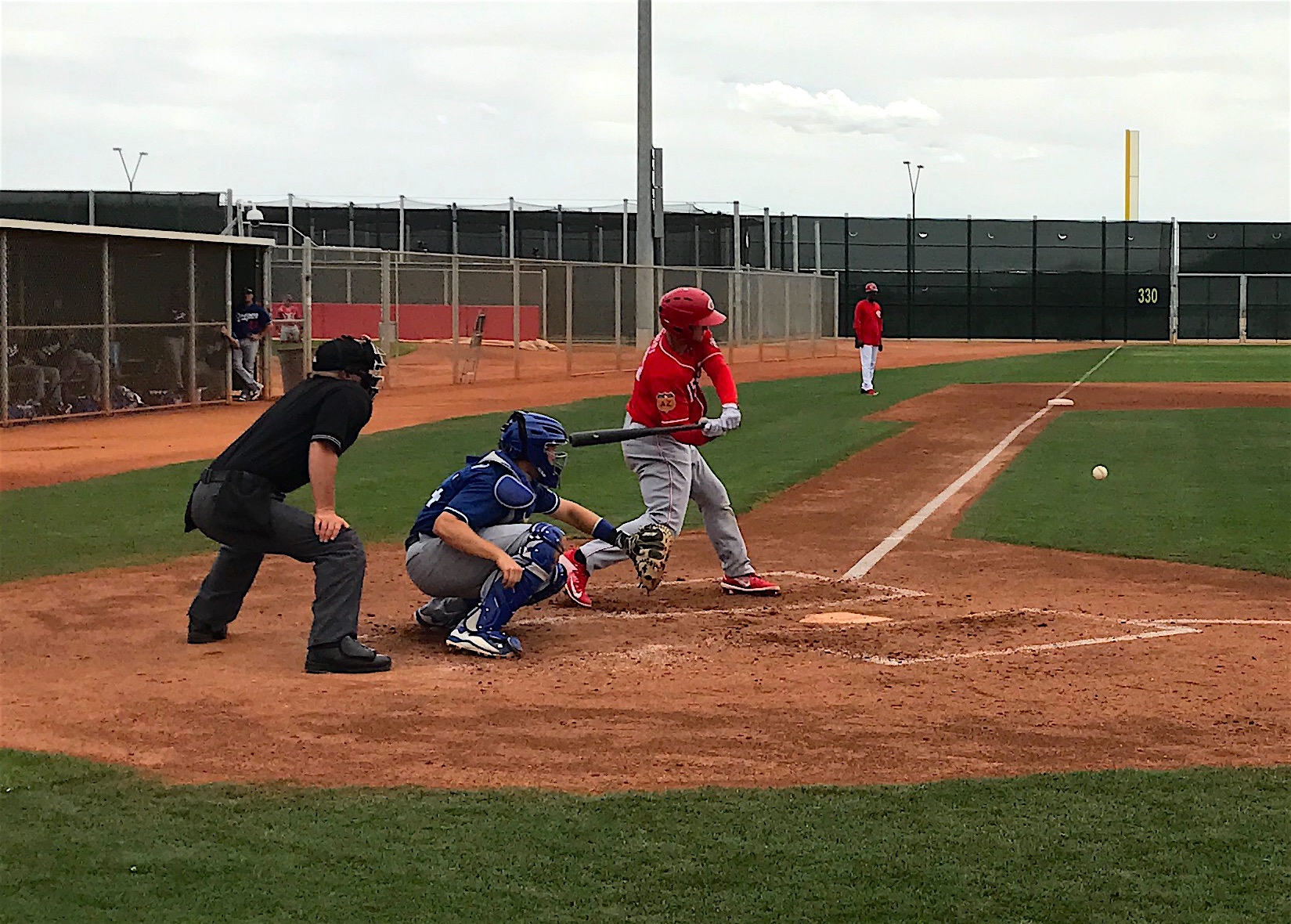 Ã¢â‚¬Â¢ Alfredo Rodriguez is the Cuban shortstop the Reds signed for $7 million last summer. Slick fielding is his calling card. He made two plays today while I was watching. Both routine, both smooth. Rodriguez wears #2. Probably because he idolizes Zack Cozart. 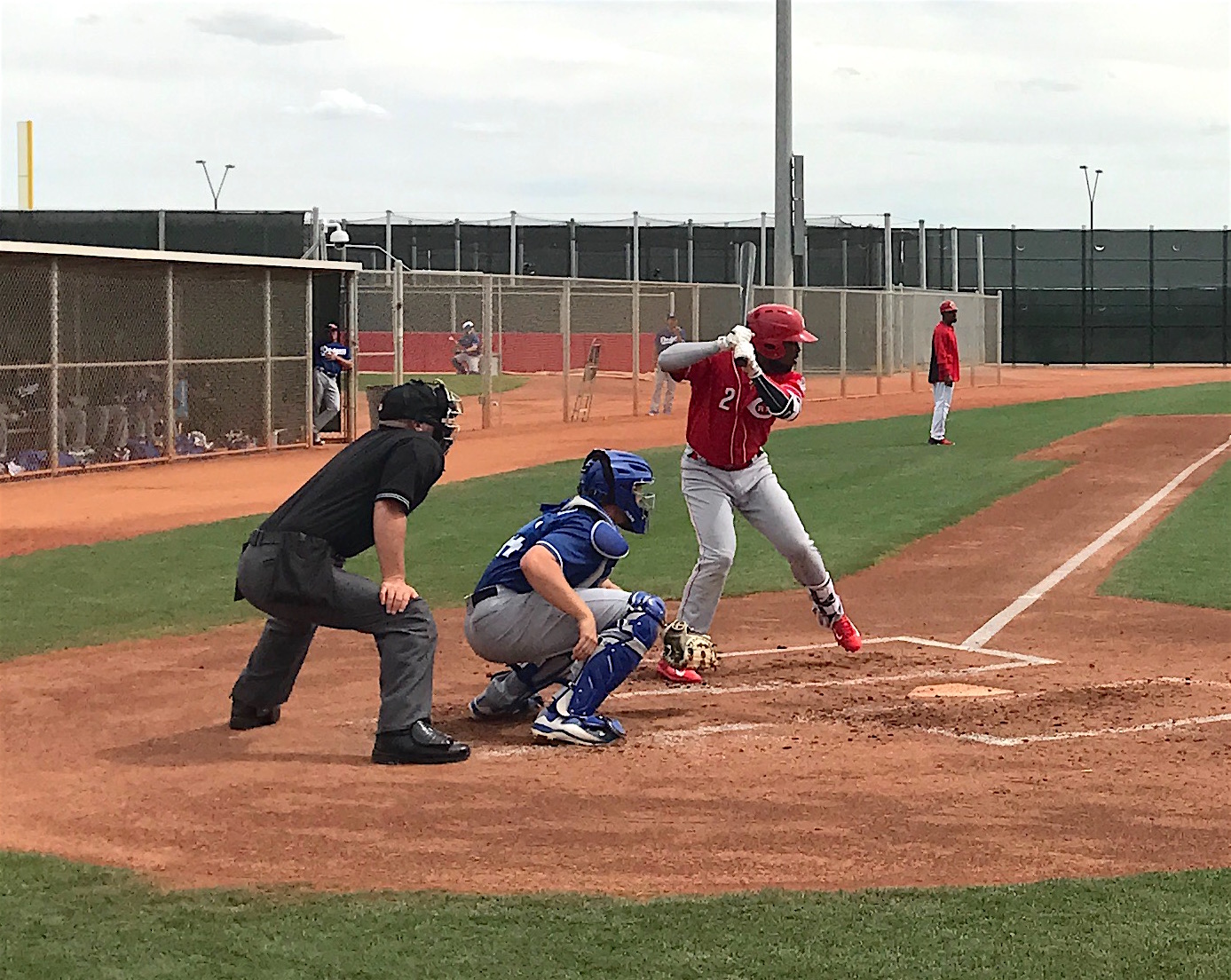 Notes from Reds vs. Cubs

My comments areÃ‚Â abbreviated because in the middle of the fifth inning it rained for five minutes and the teams and umpires agreed to call the game off. Let’s say the grounds crew was inexperienced at the task of getting tarps on the field in a hurry. 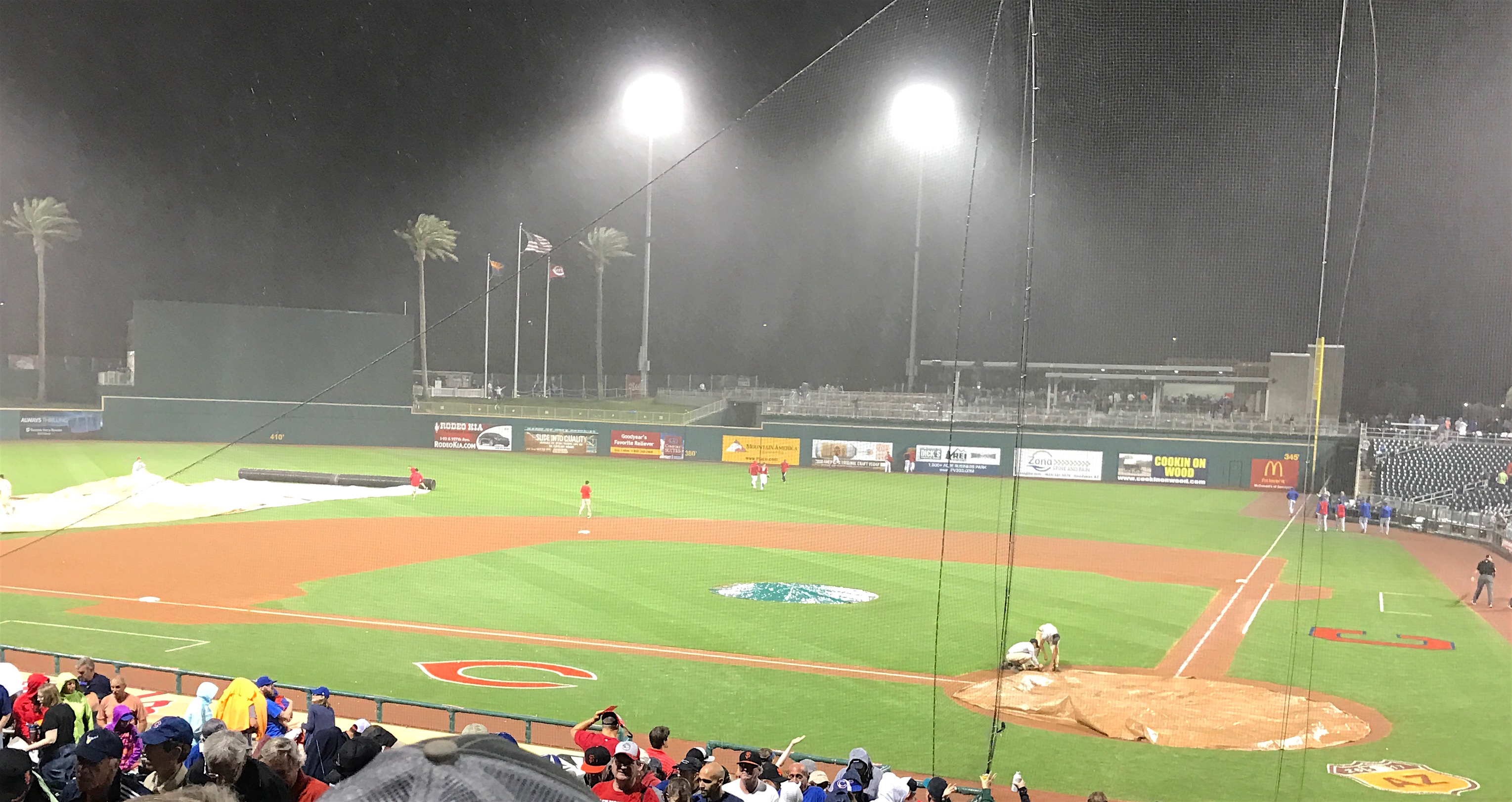 The pitch speed was still not shown.

Ã¢â‚¬Â¢ The ballpark was packed with the largest crowd in its history. Every seat was sold, thousands were standing. The attendance was 11,500. I was surrounded by Cubs fans. Clues: Everyone was speaking in a Chicago accent, they were talking about “the Quaaaad Cities” and they cheered as though every fly ball the Cubs hit was going to be a home run. Yup, Cubs fans.

Ã¢â‚¬Â¢Ã‚Â Scott Feldman held off the Cubs bats for four innings but was starting to get hit hard in the fifth when Kyle Schwarber blasted a ball most of the way to Phoenix. Says here Schwarber hits 40 home runs and walks 100 times leading off for the Cubs.Ã‚Â

Ã¢â‚¬Â¢ Devin Mesoraco threw a runner out at 2B and got a hit. He caught all 5 innings. Mesoraco is going to make the Opening Day roster, it’s just a question whether or not his hitting stroke is back. 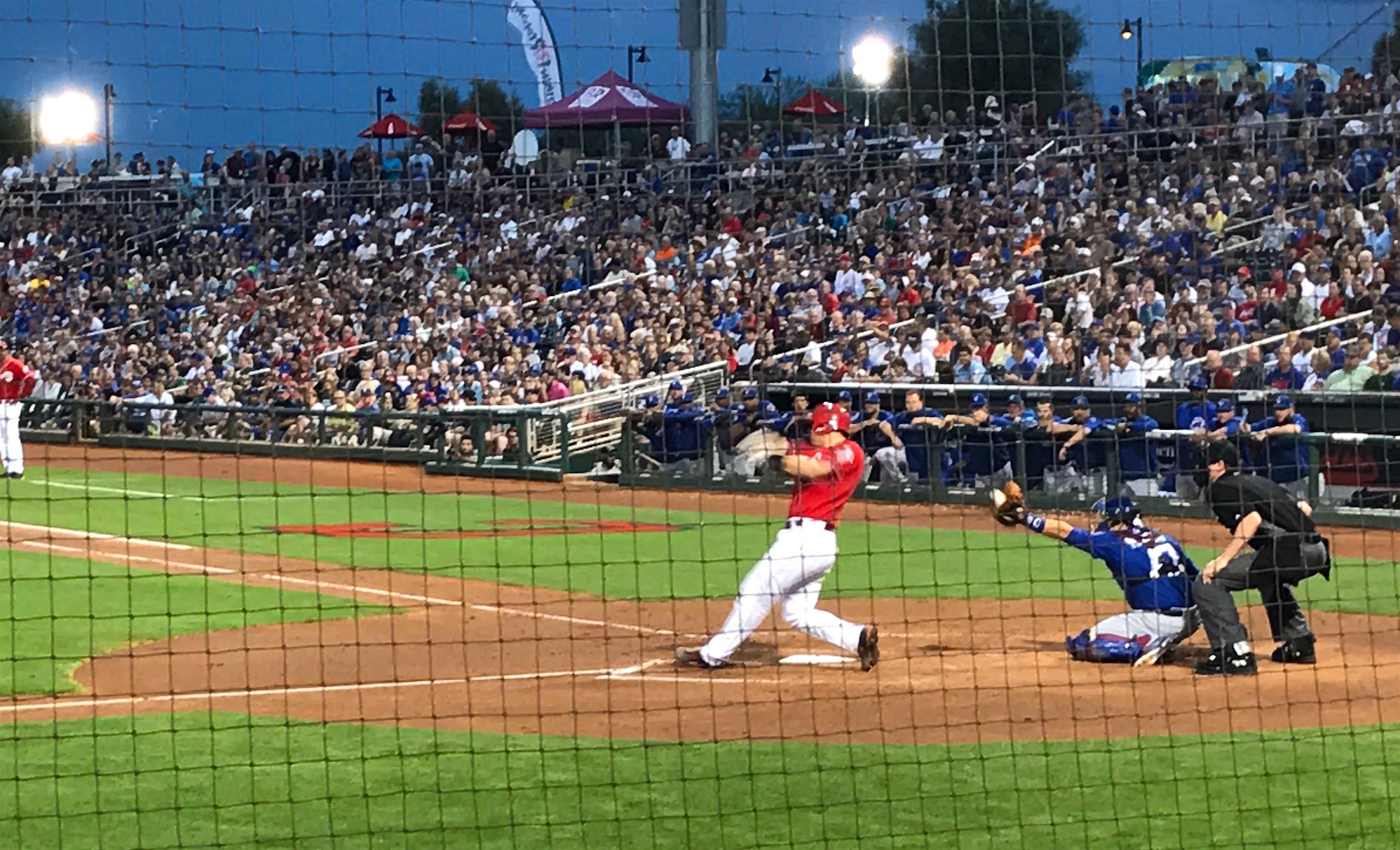 Devin the Destroyer of Worlds and Labra

Ã¢â‚¬Â¢ Tonight provided a rare sighting of long-haired Homer Bailey. He spent the better part of the first two innings in an animatedÃ‚Â and up-close conversation with Bronson Arroyo. Whatever story Bronson was telling, it had Homer laughing. 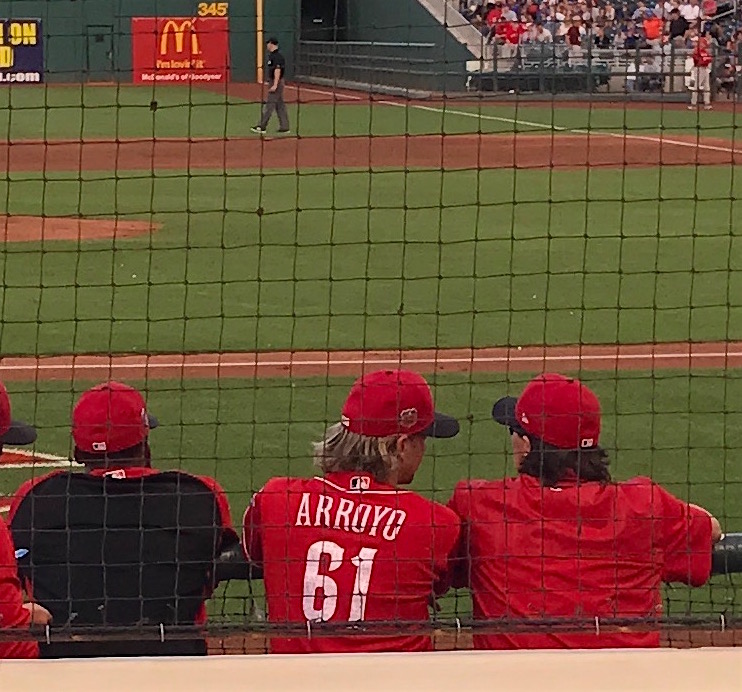 Ã¢â‚¬Â¢Ã‚Â Hernan Irabarren, who was playing 2B, committed a throwing error on a routine play to 1B. Steve Sax bad.

Ã¢â‚¬Â¢ Scott Schebler hustled on a deep single to right center turning it into a double with two outs.

Ã¢â‚¬Â¢ The Reds hammered Ryan Williams, a Cubs minor league pitcher, for five runs in the fourth inning. Adam Duvall launched a two-run opposite field home run. Dude is strong. Joey Votto, who had singled, scored ahead of Duvall. Patrick Kivlehan had another single and scored with Eugenio Suarez on an Irabarren double. 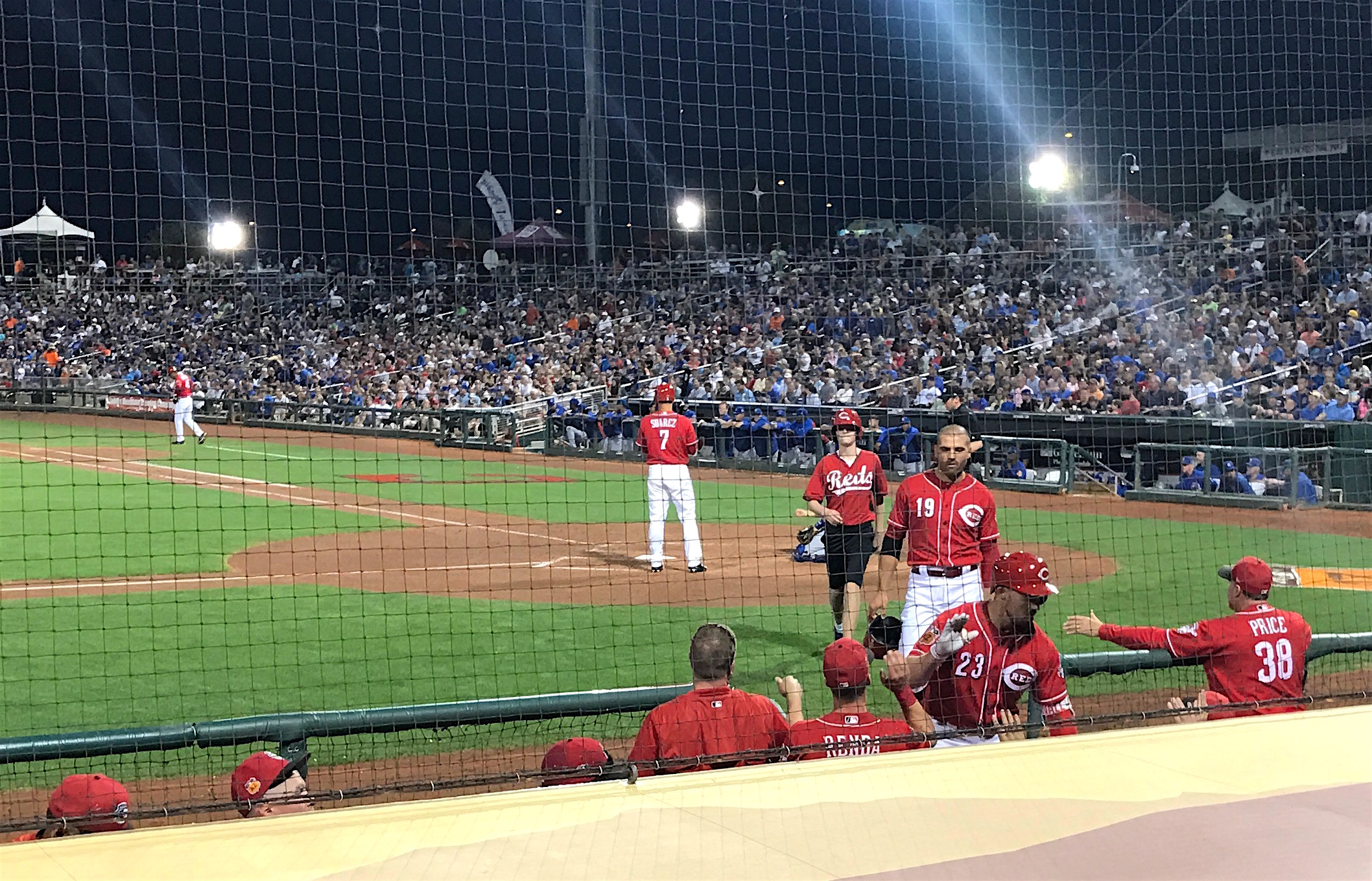 Ã¢â‚¬Â¢ Billy Hamilton, reported to have Achilles tendon soreness, sat out for the fourth straight game. He was in the dugout.

Tomorrow the Reds travel to Camelback Ranch to play an afternoon game against the Chicago White Sox.