The Reds played the LA Angels at Goodyear Ballpark today. The weather was beautiful, if maybe still a few degrees too warm for my taste. The ballpark here is one of the newest in the Cactus League, which might explain why it is less developed than other ones. It’s still much nicer than pre-renovation Ed Smith in Sarasota. But you don’t get the impression either Cleveland or Cincinnati is doing much to maximize the fan experience. 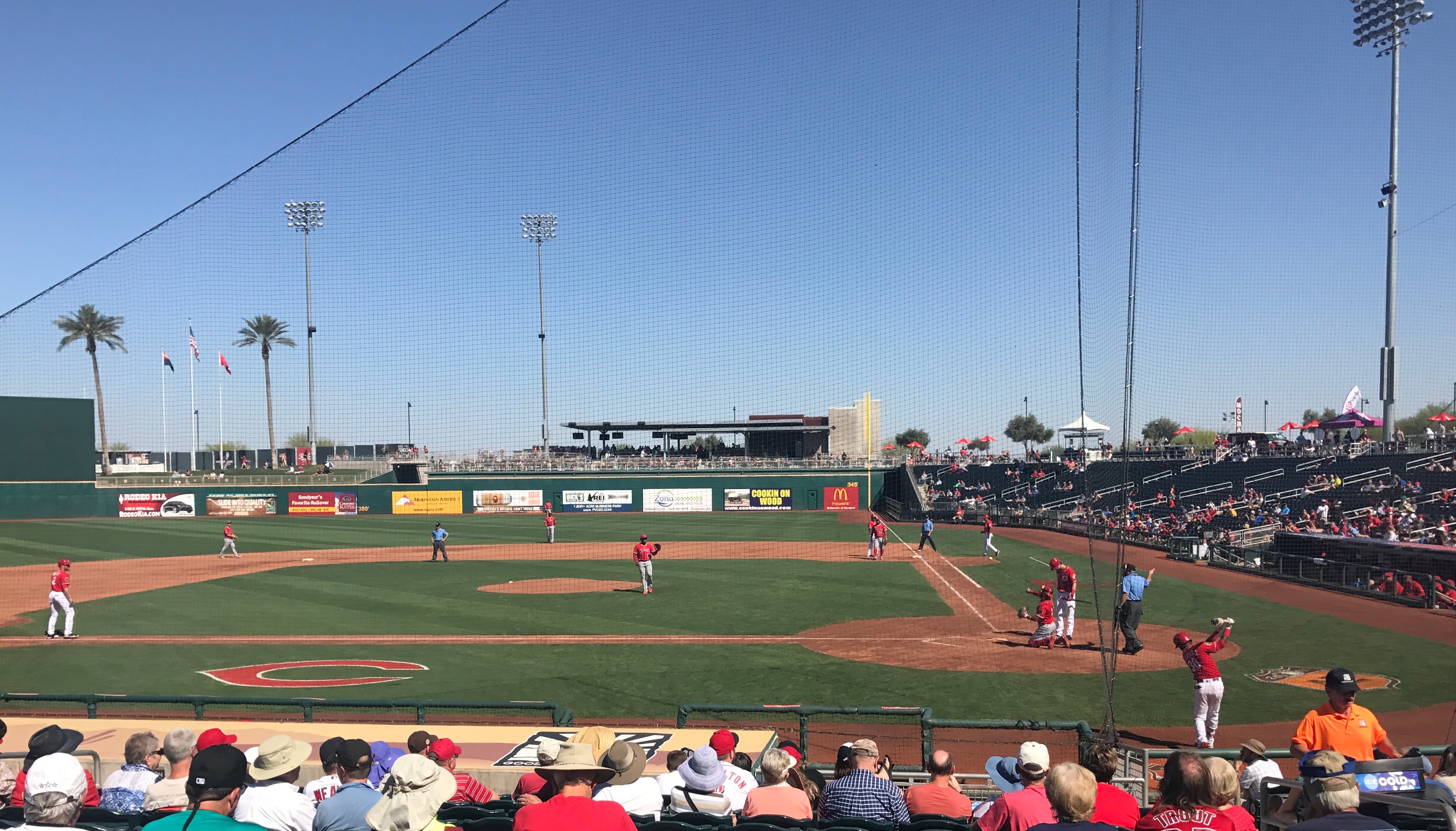 Goodyear Ballpark as seen from the third base stands

The stadiums in Peoria and Surprise showed pitch speeds, but Goodyear doesn’t show them despite having a designated space in the lower right corner of their scoreboard for exactly that information. See proof of this claim in the picture below. The guy next to me suggested it’s because the clubs that use this facility are “small budget.” But it can’t be that expensive to have an intern or volunteer put two digits of data – that are already collected – on an electronic board. Come on Goodyear, get it done. 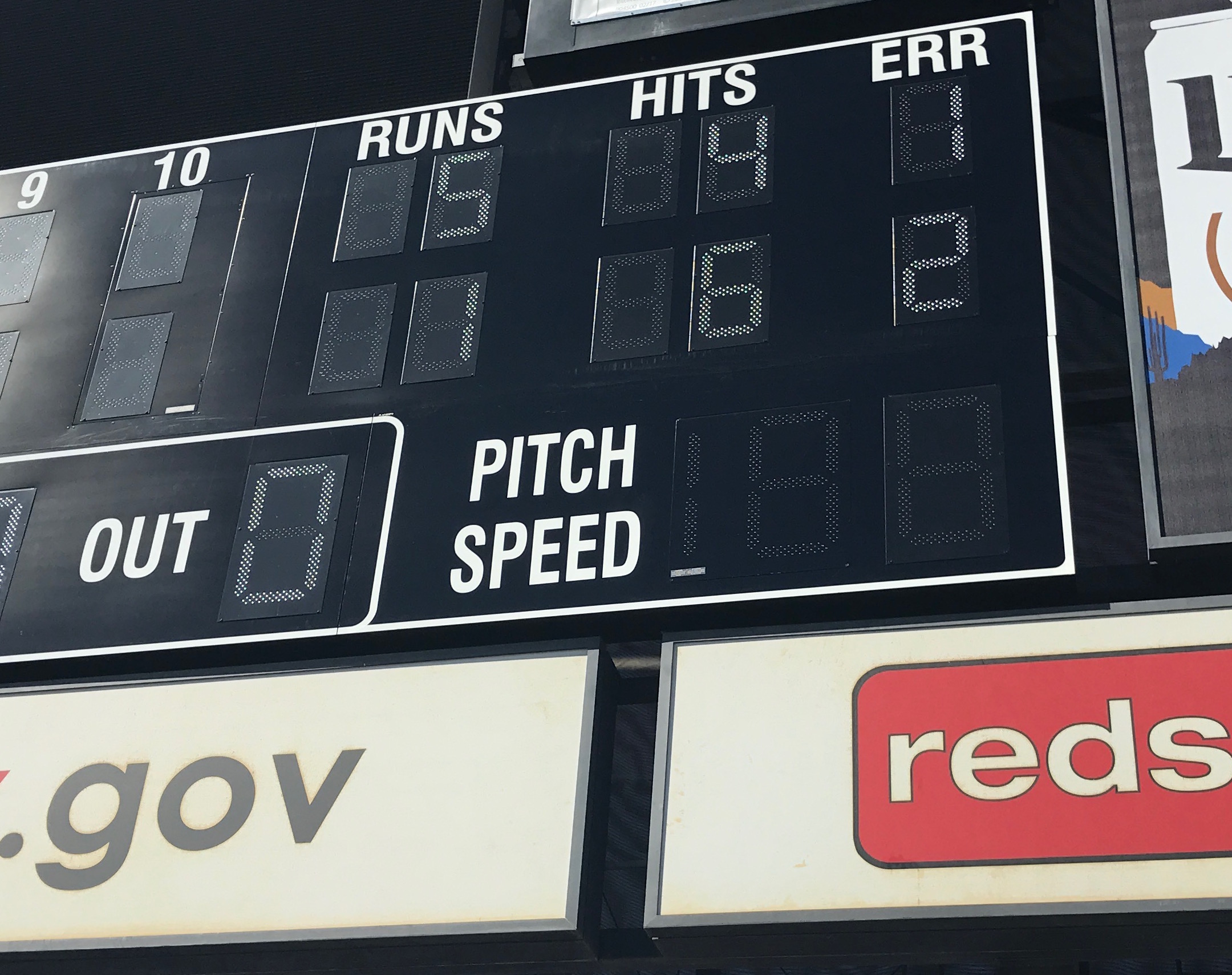 Notes from the Reds vs. Angels

Ã¢â‚¬Â¢ Cody Reed dominated the Angels major league lineup, including Mike Trout. Price let Reed pitch 5.2 innings, the longest appearance for a Reds pitcher this spring. Reed was yanked on a pitch count. He had retired the first two batters in the sixth, striking out the last batter he faced, Kole Calhoun. That made five Ks. Another encouraging sign was the number of swing-and-misses he was getting. In the third inning, with two outs and no one on, Reed struck out the best baseball player in the world. I don’t recommend basing roster decisions on a sample size of one at bat, but I’d consider an exception for striking out Mike Trout swinging. I don’t think I mentioned this yet, the Angels didn’t get a runner to second base against Reed. They only hit two balls into the outfield, a routine out and a line single. 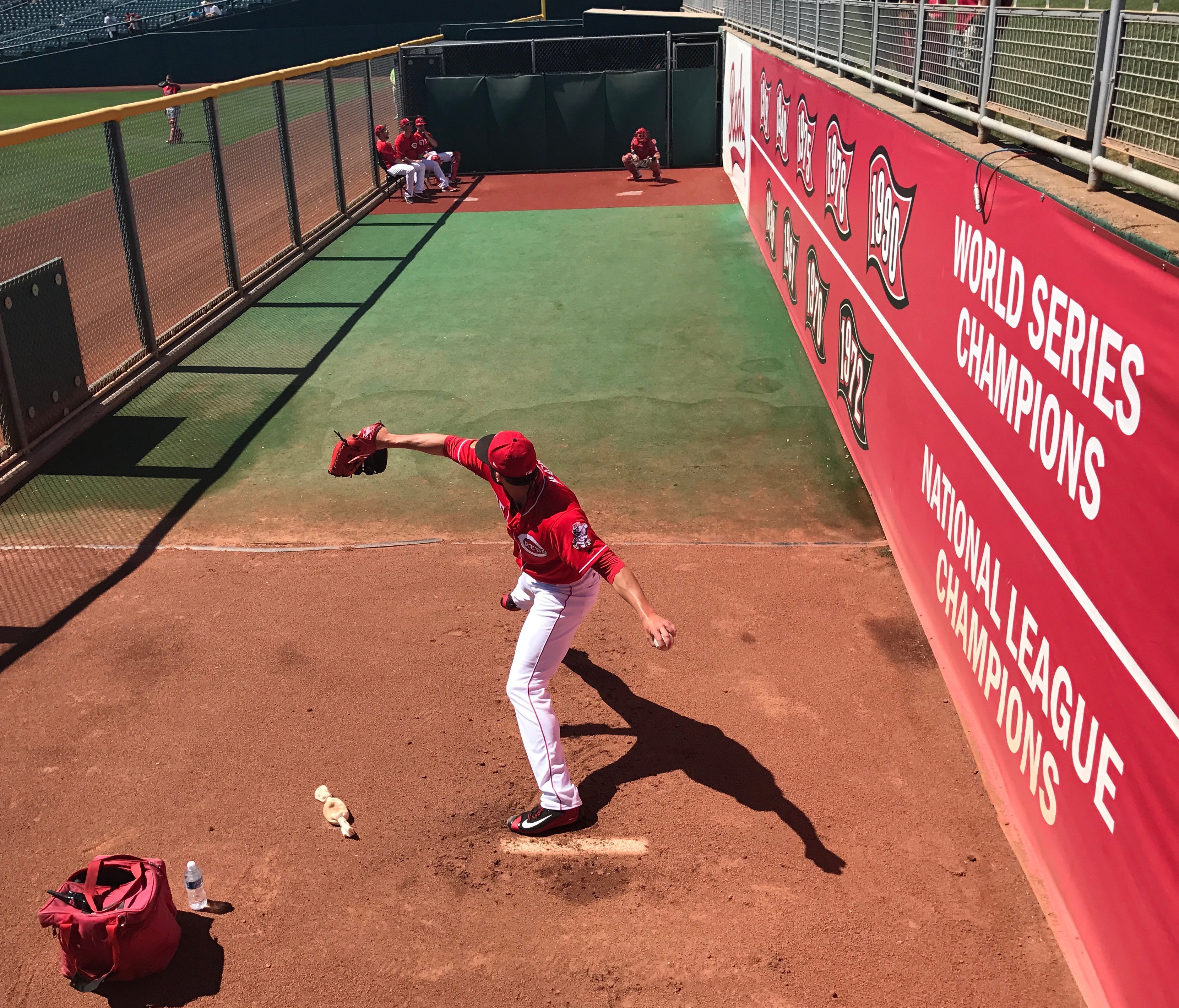 Cody Reed warming up before the game

You can be like the clueless guy sitting behind me who tapped me on the shoulder and asked/said “Wasn’t this guy 0-7 last year? He’s terrible.” or you can get excited about seeing Cody Reed (23, LHP) in the major leagues. I strongly recommend the latter.

Ã¢â‚¬Â¢Ã‚Â If you’re wondering why I haven’t been reporting on Raisel Iglesias, Michael Lorenzen, Drew Storen, Blake Wood or (until today) Tony Cingrani, it’s because they haven’t been pitching in major league games. That’s been the case since the Reds off day last Thursday, five games and counting. Reports of non-serious (heh) elbow and back issues for Iglesias notwithstanding, the explanation for this is straightforward: The Reds have an ever-growing list of decisions to make regarding the Opening Day starting rotation and bullpen. Seeing the pitchers who are in contention for those spots is more important than watching the locks. My scout and new housemate Doug Gray tells me Wood and Storen pitched in today’s minor league game.

Bonus Cody Reed pic because today was his day

Ã¢â‚¬Â¢ Tony Cingrani got rocked in his one inning of work by a combination of big league and minor league players.

Ã¢â‚¬Â¢ The Reds faced reliever-turned-starterÃ‚Â J.C. Ramirez, who held his former team to a run in five innings. Ramirez struck out six and didn’t walk anyone. When Ramirez was walking to the bullpen to warm up, Tucker Barnhart shouted half-jokingly “So are you a starter now, or what?” Ramirez smiled and the players shared a big hug.

Ã¢â‚¬Â¢ Infield notes: Arismendy Alcantara was third baseman du jour. He made an excellent play charging a ground ball and was 0-for-3 with two strikeouts at the plate. Tony Renda has made several bad plays at 2B in the few games I’ve watched. A two-out error on a throw to 1B – the throw was high by about ten feet on an easy play – cost the Reds B Team five unearned runs. Hard to see them trusting Renda in the field. Zack Cozart is already making all the plays at short. He looks back to normal in the field and hitting. Jose Peraza swung at a ball at eye level on a 3-2 pitch and got thrown out trying to steal later.

Ã¢â‚¬Â¢ The Reds were ahead 1-0 going into the 7th inning and took out their starters. The bench players lost their three innings 9-0. You shouldn’t need more evidence that wins and losses in spring training are meaningless. But today’s game is more proof. 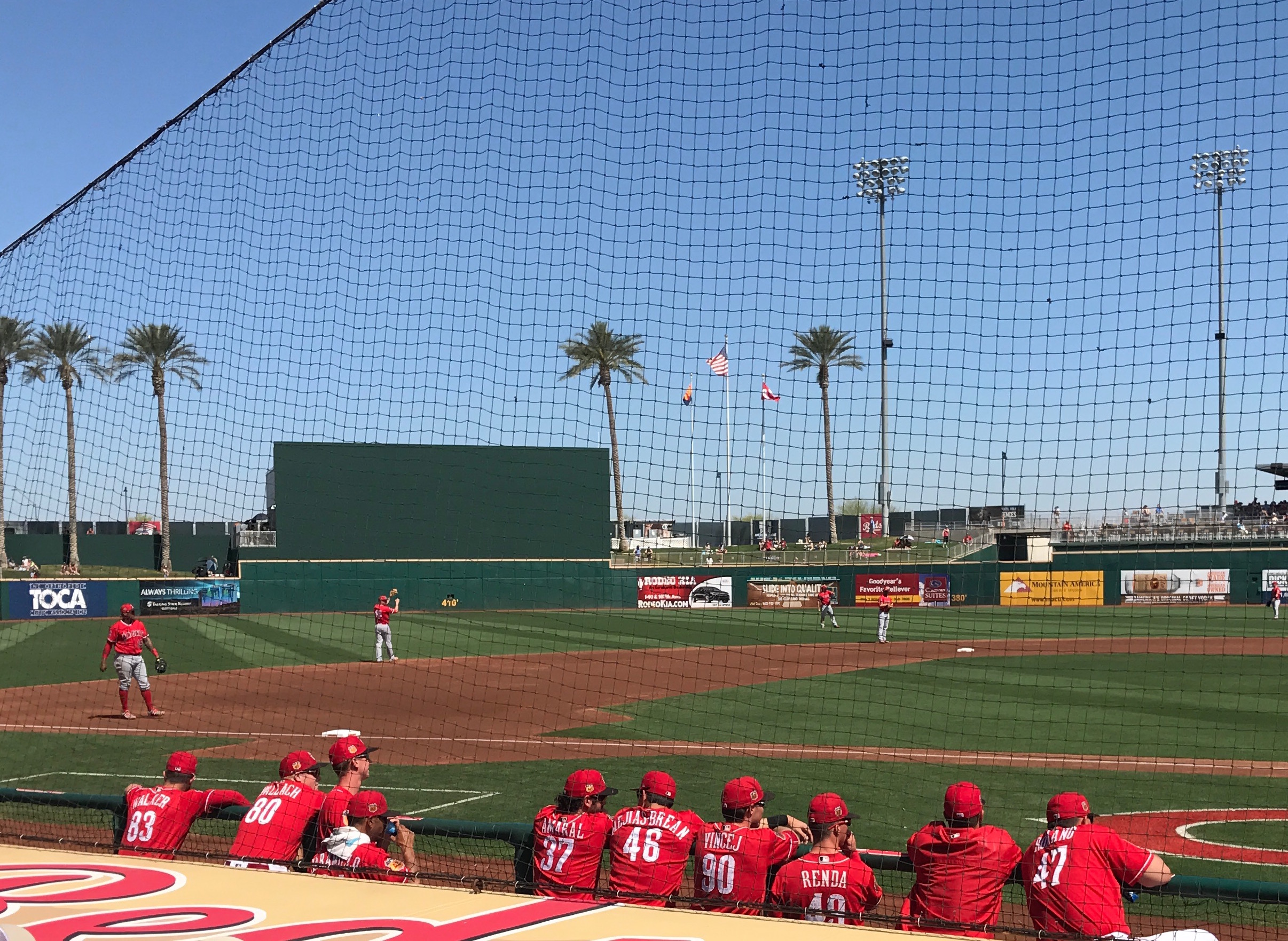 Not a great day for the Reds bench players

Ã¢â‚¬Â¢ Outfield notes: Desmond JenningsÃ‚Â singled, but missed a couple other opportunities. Jesse Winker who got the start in left field and struck out two times in three at bats. Ryan Raburn is strong. He hit an opposite field home run on a pitch that looked like it jammed him. Raburn’s power off the bench would play nicely on a different team. Not sure it make sense for him to get a roster spot on this team. But he might.

Ã¢â‚¬Â¢ Defensive play of the game – Goes to Jose Peraza who fielded a ground ball on the third base side of second base (he was shifted toward the bag) and flipped it backhanded *with his glove* to Cozart covering second to get a force out.

The Reds play a night game tomorrow at Goodyear against the Chicago Cubs. Scott Feldman will start against the defending world champions. The Reds for some puzzling reason announced yesterday Feldman would be the Opening Day starter. More on that at a later time. I hope I get to see Cincinnati’s own Kyle Schwarber play.