The Reds played the Kansas City Royals today at Surprise Stadium in Surprise, AZ. The Royals share the ballpark with the Texas Rangers. Surprise is a Phoenix exurb about 30 minutes north of Goodyear. Surprise Stadium offers considerably more shade than Goodyear. My third row seat behind the Reds dugout was without direct sun the entire game. 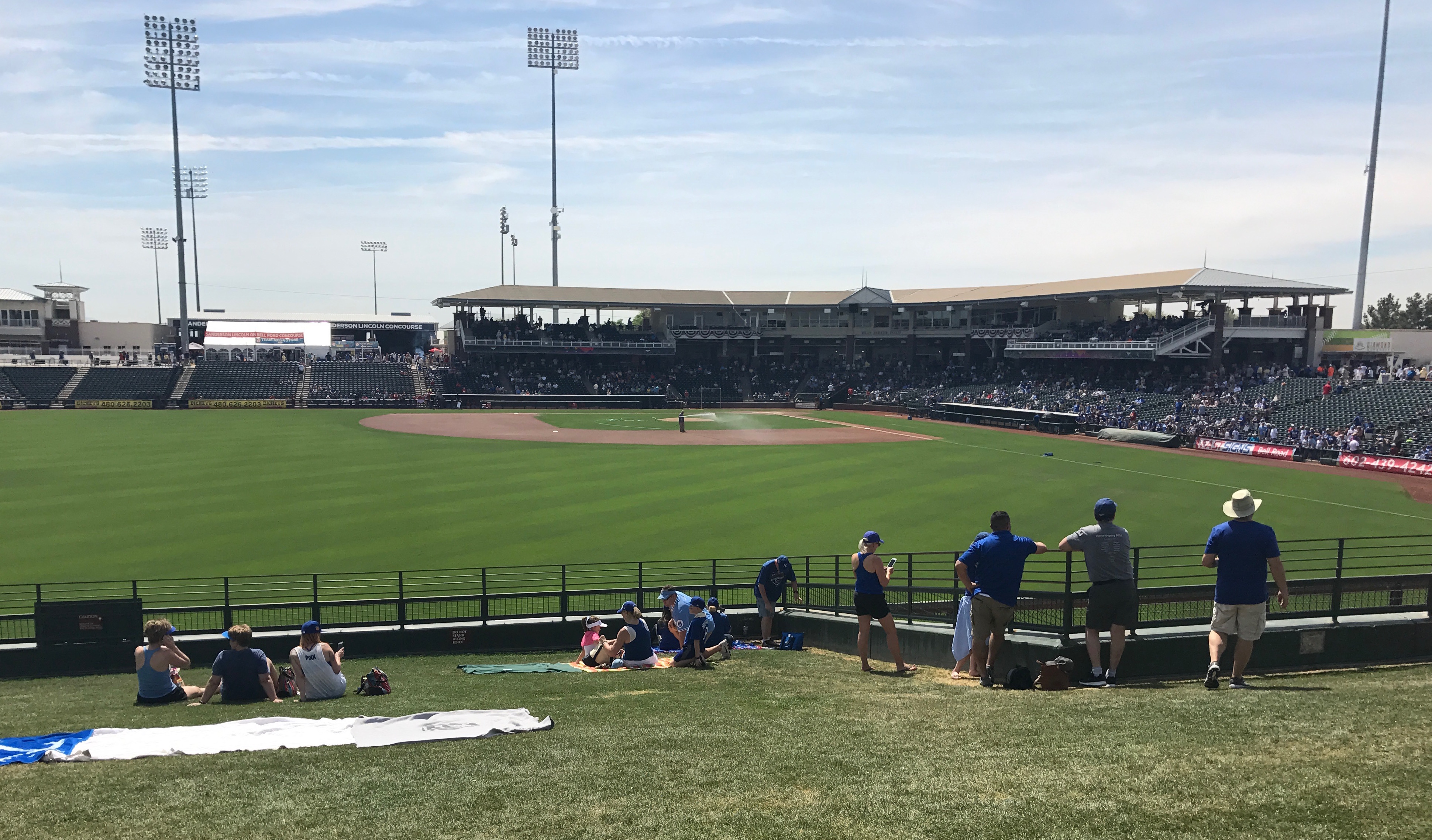 I’d rank Surprise as the most aesthetically pleasing of the three parks I’ve been to so far this year, although I remember Camelback Ranch (Dodgers and White Sox) as better from my trip there in 2010. Surprise Stadium also shows radar gun readings on the scoreboard and you know we love that. Goodyear Ballpark needs to add that. Several people sitting around me were commenting on pitch speeds. Hint, hint. 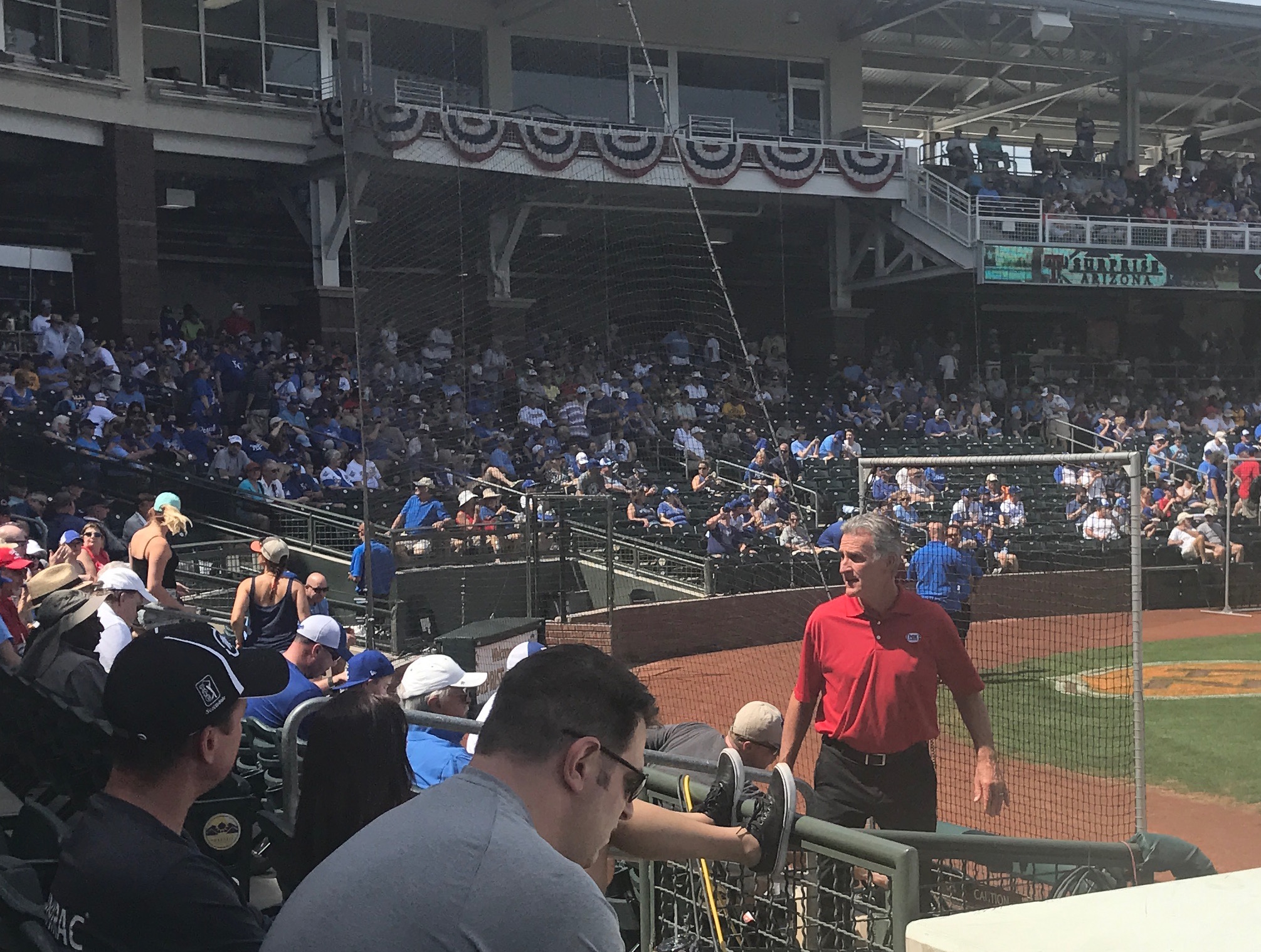 Friend of Redleg Nation, Chris Welsh, before the game

The final score, Reds win 10-6, is a perfect indication of what happens in spring training after the major league pitchers are finished. The Reds only had two hits (Mesoraco and Winker) off Royals starter Jason Hammel through five and were losing 1-0. The Reds remain undefeated since my arrival.

Notes from Reds vs. Royals

Ã¢â‚¬Â¢ Rookie Davis started for the Reds and pitched four innings. He faced a Royals lineup with several major league players, struck out three and walked one. Davis did get to full counts on a lot of Royals hitters, though. Davis gave up four hits, but three of those were infield singles. Overall, the Royals didn’t do much against him. Davis’ fastball was around 92-94 mph much of the day and he hit 96 mph a couple times. From my perspective, Ã‚Â Davis was as impressive as Amir Garrett and Robert Stephenson yesterday. Davis (23) was the headliner return in the Aroldis Chapman trade to the Yankees.

Ã¢â‚¬Â¢ Bryan Price brought Barrett Astin in to pitch the fifth inning. The reason good relievers get brought in early during spring training is the manager wants them to pitch while the other team’s major league hitters are still in the game. Astin, who never broke 90 mph, retired three major league batters in order. No strikeouts, no walks, one hard-hit ball. For Price to use Astin this way shows the Reds are giving him a serious look for the Opening Day roster. Astin (25) was part of the salary dump trade of Jonathan Broxton to Milwaukee.

Ã¢â‚¬Â¢ Another player used in a situational manner was Jesse Winker. Price had Winker pinch hit for Rookie Davis Ã‚Â in the 5th inning. Winker didn’t play after that but made the most of his appearance. With Devin Mesoraco on first base, Winker lined Hammel’s first pitch into CF for a single. If Price wanted to see how Winker did in a pinch hitting role against a top major league pitcher, Winker aced the test. Winker (23) was drafted in the supplemental round by the Reds in 2012.

Ã¢â‚¬Â¢ Devin Mesoraco caught for four innings. He’s had a lot of bad swings. He missed at least three breaking balls today by a foot or more. To be fair, Hammel is tough and several of the Reds looked bad against those pitches. On the other hand, Mesoraco lined an 0-2 pitch into CF for a single off Hammel, the first hit for the Reds. Noteworthy (maybe), Mesoraco batted 7th in the lineup. Perhaps the goal with him has shifted from batting him high in the lineup to get at bats to preparing the catcher for where he’s going to hit in April. Maybe him batting seventh didn’t mean anything. Mesoraco (28) was drafted by the Reds in the first round in 2007 – nearly 10 years ago. 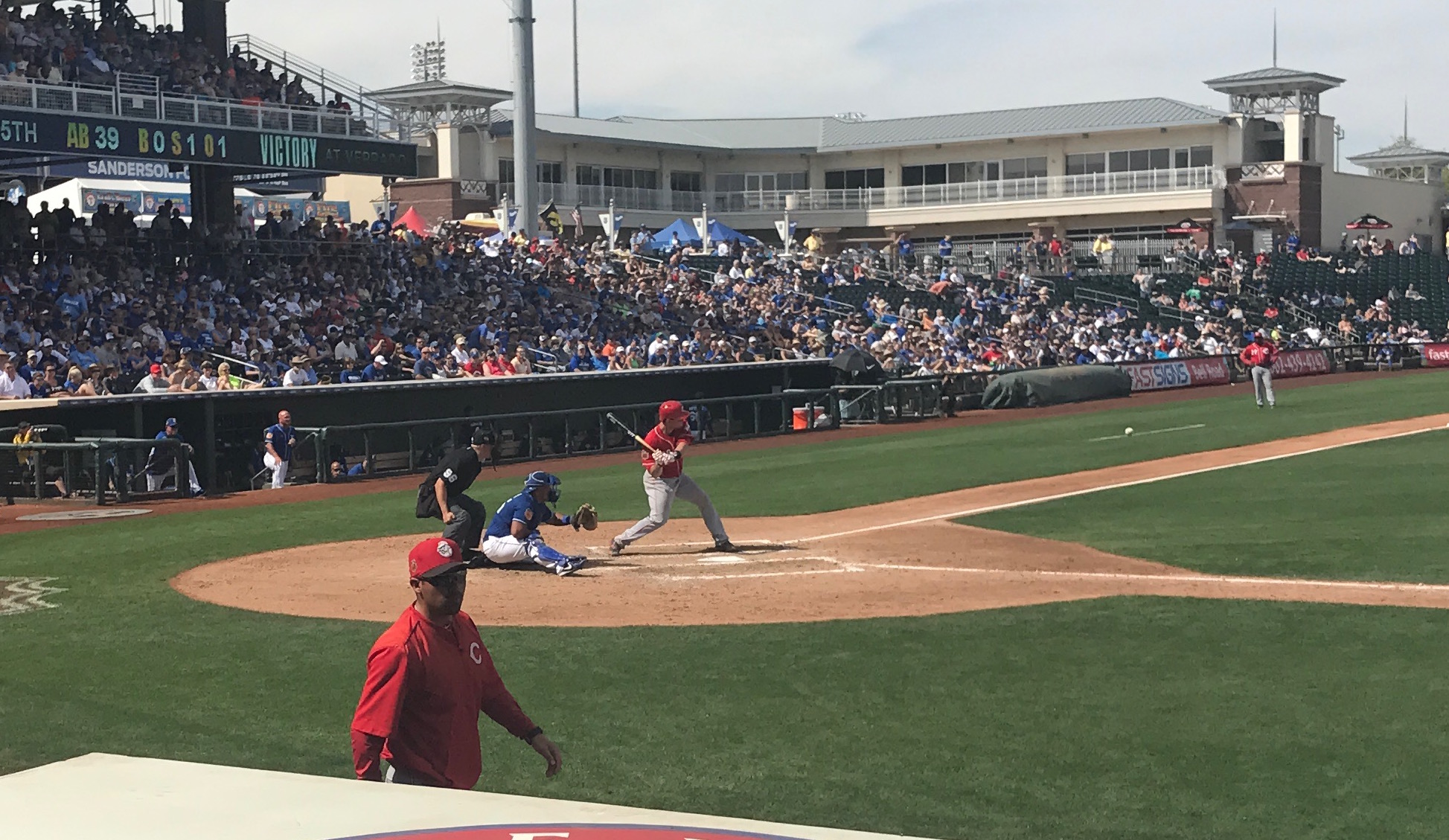 Devin Mesoraco about to connect (ball in frame)

Ã¢â‚¬Â¢ Joey Votto smashed two balls into the gap off of Hammel. One was caught the other fell in for a double. After VottoÃ‚Â was taken out of the game, two of his used batting gloves flew out of the Reds dugout into the lap of a guy in my row three seats from me. I asked politely if he’d be willing to let me have one, but he was in no mood to share his random good fortune. Votto (33) was a second round pick in 2002.

Ã¢â‚¬Â¢ Eugenio Suarez singled to CF and made a long, noisy out to deep LF. Yesterday, Suarez hit a ball 400+ feet down the left field line that was foul by not much. He’s made a lot of solid contact without the stats to show for it. Suarez also played SS today and looked sharp on the two plays he had. One was turning 3-6-1 double play after an on-target throw from Votto, the other was fielding a hard-hit ball in the hole and starting a 6-4 yes-siree 3.

Ã¢â‚¬Â¢ Patrick Kivlehan played 3B and made two nice grabs snagging line drives. He also had a hit in the 7th inning off of Kelvin Herrera, the Royals tough closer. Kivlehan hit a homer against a minor league pitcher yesterday. Some background: Kivlehan played 3B for Rutgers in college, where he hit for the Big East Triple Crown in 2012. He was drafted in the fourth round by the Mariners, who moved him to 1B and then the OF. He bounced around last year (Mariners-Rangers-Mariners-Padres) before the Reds picked him up off waivers in the last week of the season. I know you’re trying to forget the 2016 Reds, but Kivlehan played in three September games, going 0-5. I’m not suggesting he’ll make the OD roster, or that he won’t, but the Reds do need a backup 3B, don’t they? Another name on the pile. Reminder, his hit today was off Kelvin Herrera. 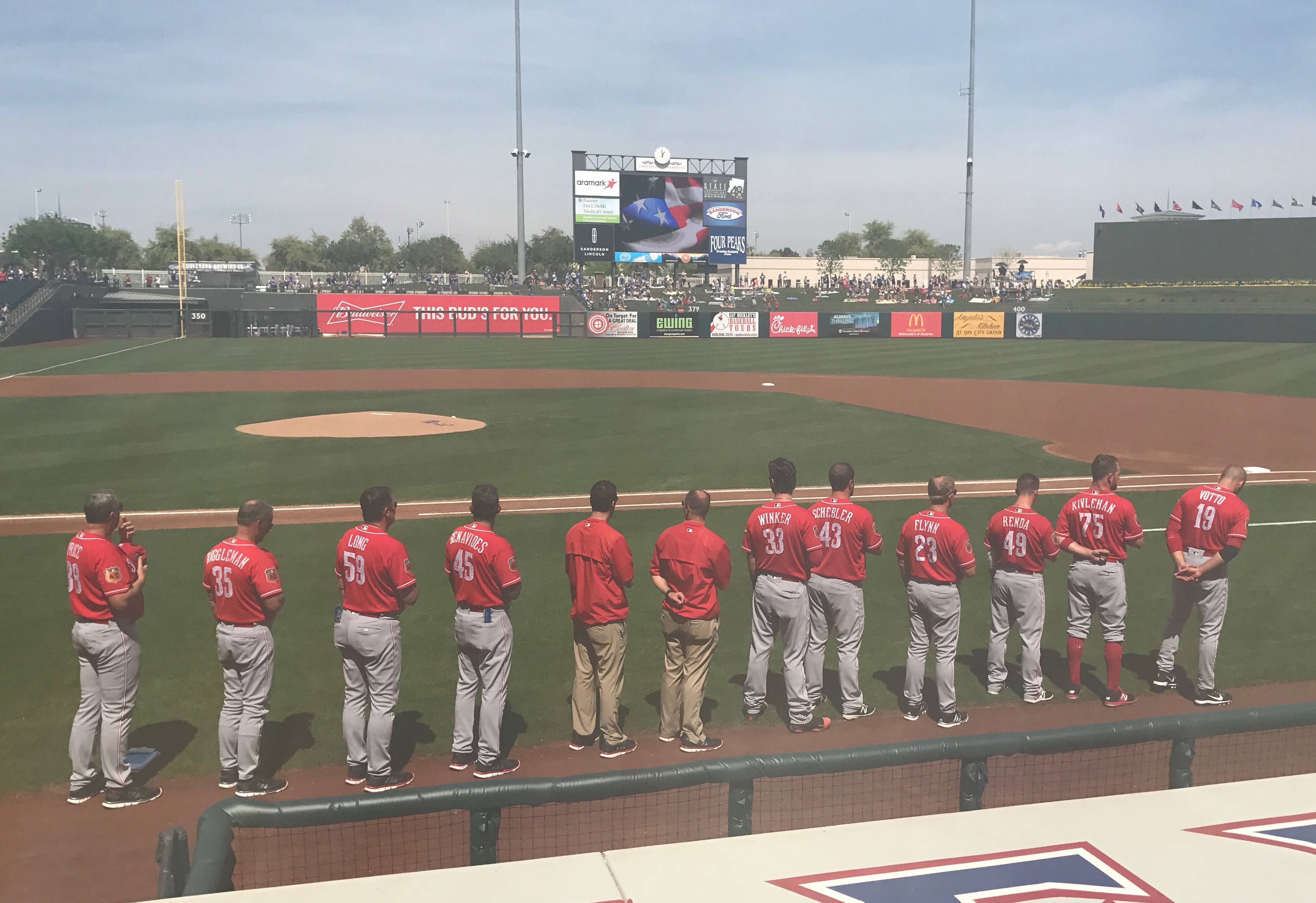 Patrick Kivlehan #75 second from right, next to Joey Votto

Ã¢â‚¬Â¢ The fly ball Scott Schebler hit in the 6th inning off of Al AlbuquerqueÃ‚Â looks like a sacrifice fly in the scorebook. It was a couple feet from a deep grand slam in person. Schebler (26) came to the Reds from the Dodgers in the Todd Frazier trade. 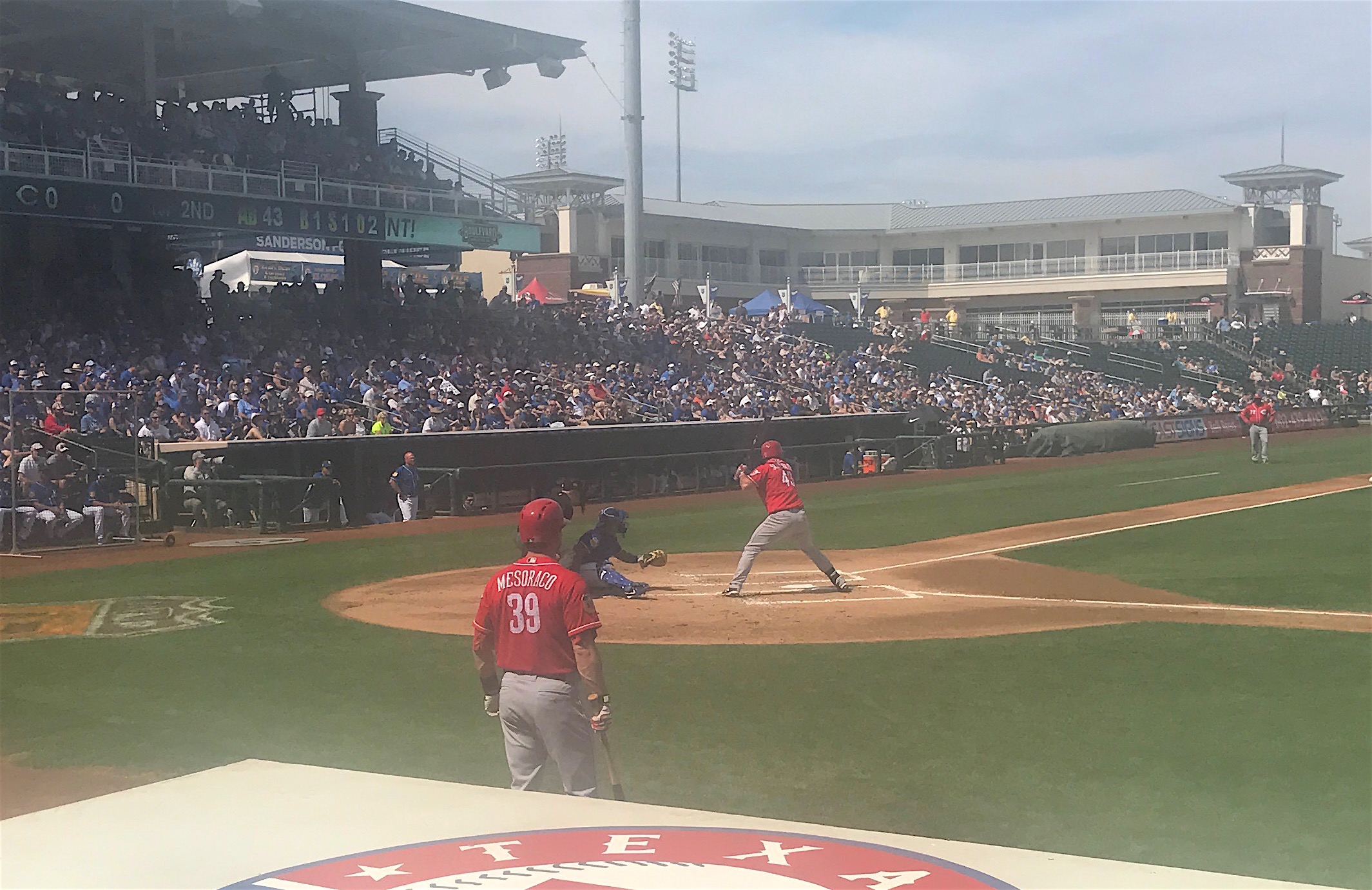 Scott Schebler at the plate

Ã¢â‚¬Â¢ Tim Adelman pitched three innings and got hit around pretty good. Adelman did contribute a two-run double in the Reds’ 8-run 8th inning. From a roster standpoint, Adelman might still be in the SP competition, but today felt more like “let’s see how Tim does in a swing role” appearance.

Ã¢â‚¬Â¢ Defensive play(s) of the day goes to Kivlehan with honorable mention to Suarez. Details above.

Ã¢â‚¬Â¢ Drove into Phoenix this morning for breakfast at Matt’s Big Breakfast. Went twice in 2010. Matt’s is my favorite breakfast place anywhere. Their home fries are the definitive breakfast potatoes. Large, well-griddled and mixed with rosemary and hefty pieces of caramelized onions. I promise a picture next time, soon. Matt’s breakfast should be on your list of reasons to travel here for Cactus League games.