The Reds played the San Diego Padres today at the Peoria Sports Complex in Peoria, AZ. The PSC is home to the Padres and Seattle Mariners. It’s about 30 minutes north of Goodyear. On the drive, you pass the University of Phoenix Stadium that hosts the Fiesta Bowl, occasional Super Bowls and college football national championships. In a couple weeks, the NCAA basketball Final Four will be there. 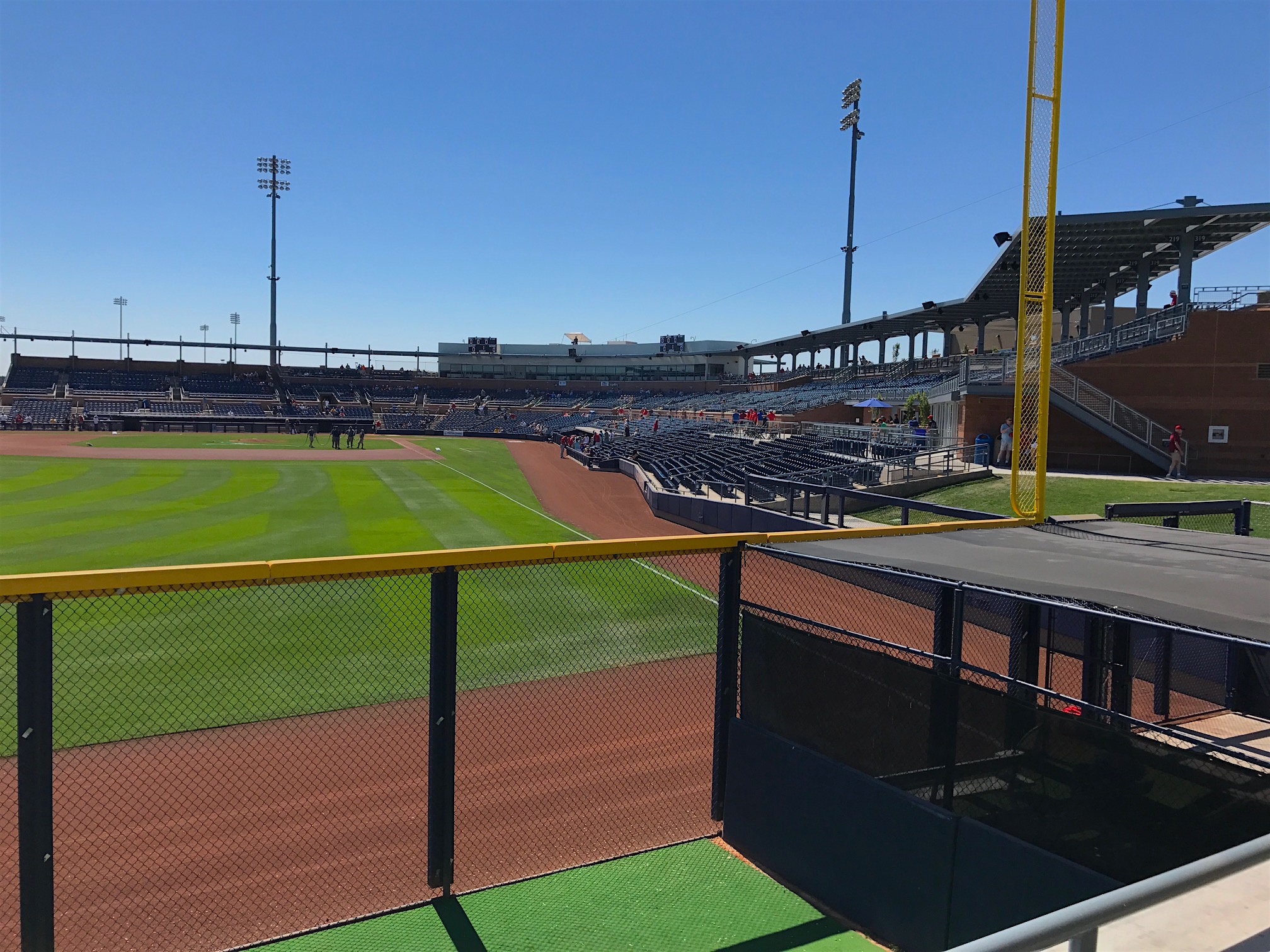 The Peoria Sports Complex has more shaded seating available than Goodyear Ballpark, but sitting in the good close-up seats was still a sweltering experience. On the other hand, the PSC shows pitch speeds. Glorious.

Notes from Reds vs. Padres

On the pitching side, the Reds coaches have focused on auditions for the starting rotation. Yesterday Bronson Arroyo and Sal Romano pitched, today Amir Garrett and Robert Stephenson got all nine innings. The relievers are pitching in the minor league games. We’ll see tomorrow if that continues. The fact that Garrett got to pitch first, against the Padres starters says something. Not sure what. Maybe he won rock-paper-scissors. Maybe he’s ahead of Stephenson in the manager’s mind so far. 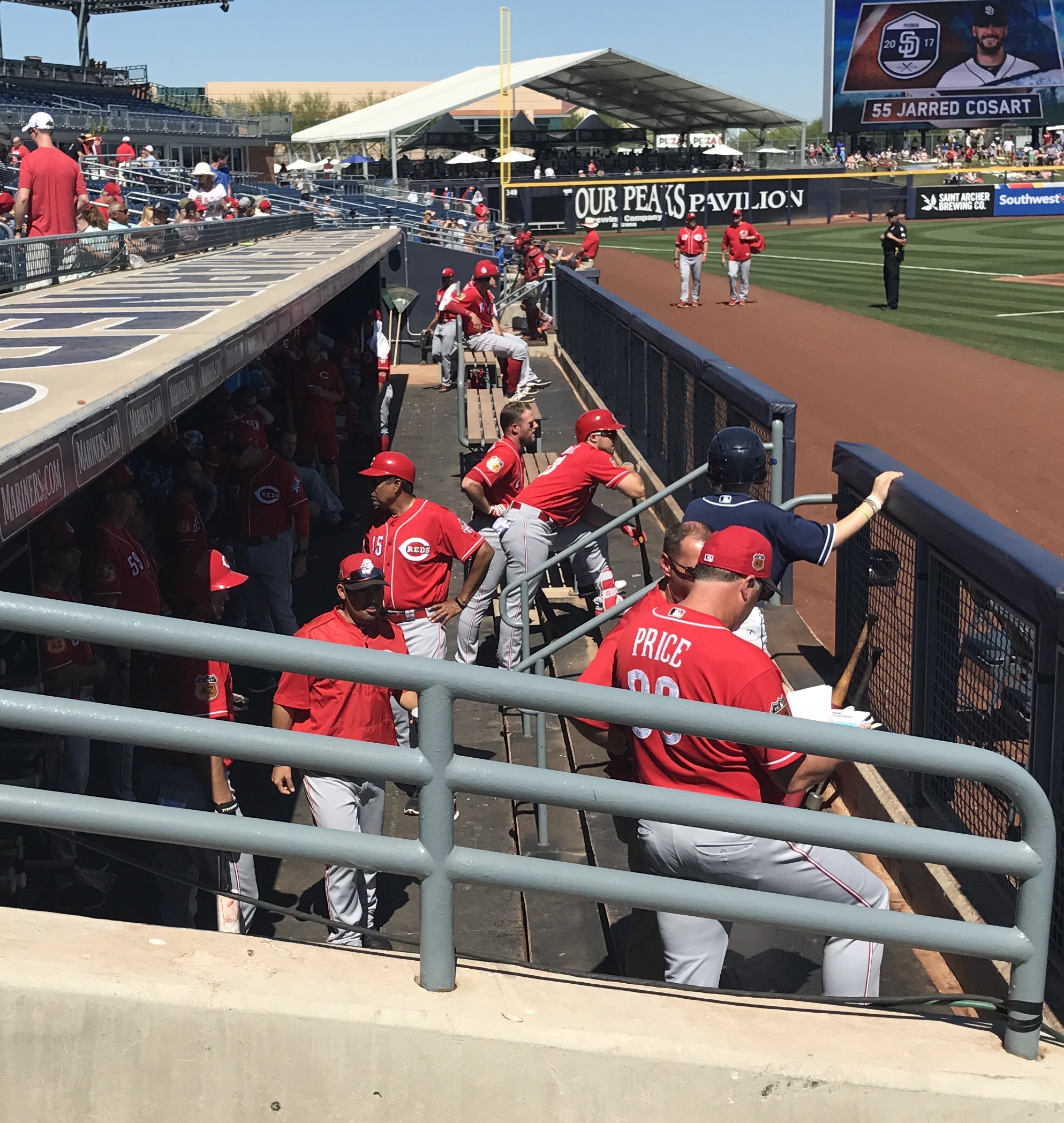 Amir Garrett pitched five innings and was hit hard by major league batters. Early in the game he struggled with pitches up in the zone. Uber-prospect Hunter Renfroe (#44 Baseball America, #75 FanGraphs) deposited a chest-high Garrett fastball far over the left field fence for a two-run homer. Garrett’s fastball was in the 90-94 mph range. He showed off his athleticism (remember his basketball background) fielding a bunt, looking a runner back to third and throwing to first. 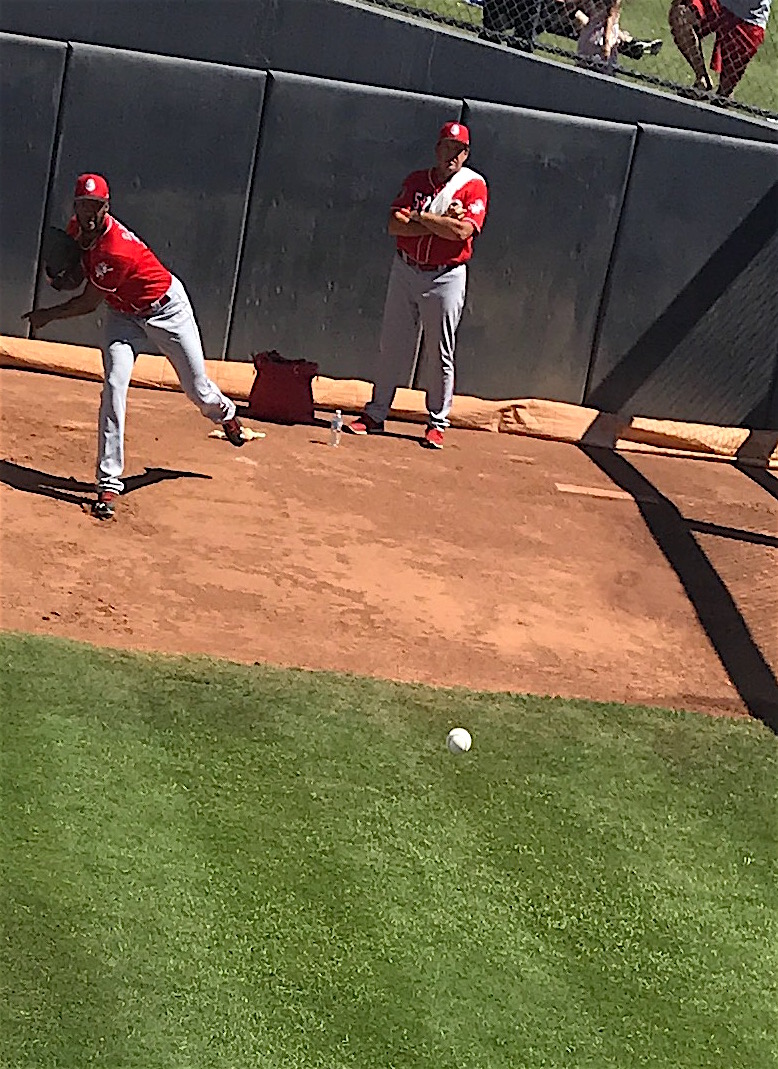 Robert Stephenson pitched the final four innings, mainly against minor league players. Stephenson’s fastball worked in the 94-96 mph range. He walked the first batter he faced (sigh) and added a wild pitch in his first inning. He struck out five, but you wouldn’t know any of the hitters except Erick Aybar. That’s Erick Aybar with a wRC+ of 65. Stephenson gave up a bomb to Hector Sanchez, a borderline major leaguer. Stephenson did single in his first at bat.

Jesse Winker hit a long, opposite field home run. Who-hoo! But it was off a journeyman minor leaguer, so don’t code this dataÃ‚Â to your “Winker should be in the major leagues” bin. Instead, file it where the “evidence that Winker has power/Winker wrist OK” goes.

Speaking of sock, Scott Schebler hit a 400-ft, 3-run homer off someone named Andre Rienzo. As a metric for Rienzo’s obscurity, the Padres scoreboard misspelled his name. In his first at bat, Schebler executed a perfect bunt single against an extreme defensive shift. It was bunted hard, to clear the mound, but the 3B playing SS had no play. The bunt paid off as Schebler scored on Desmond Jennings’ double to deep left-center.

The defensive play of the game for the Reds occurred on Amir Garrett’s first pitch. Travis Jankowski lined a Garrett fastball down the left field line. Adam Duvall charged and made a diving catch. Runner up for strong defense today goes to Eugenio Suarez, who made two outstanding plays fielding grounders at 3B. Suarez, Zack Cozart and Jose Peraza executed a base path rundown that resulted in two Padre outs.

Desmond Jennings’ run-scoring double came off the one major league pitcher the Padres threw today, Jarred Cosart. Unless there’s significant change or an injury, it’s hard to imagine Jennings (30) not making the OD roster. He’s started to hit the ball well with gap power and is the second-best defensive CF after Billy Hamilton. 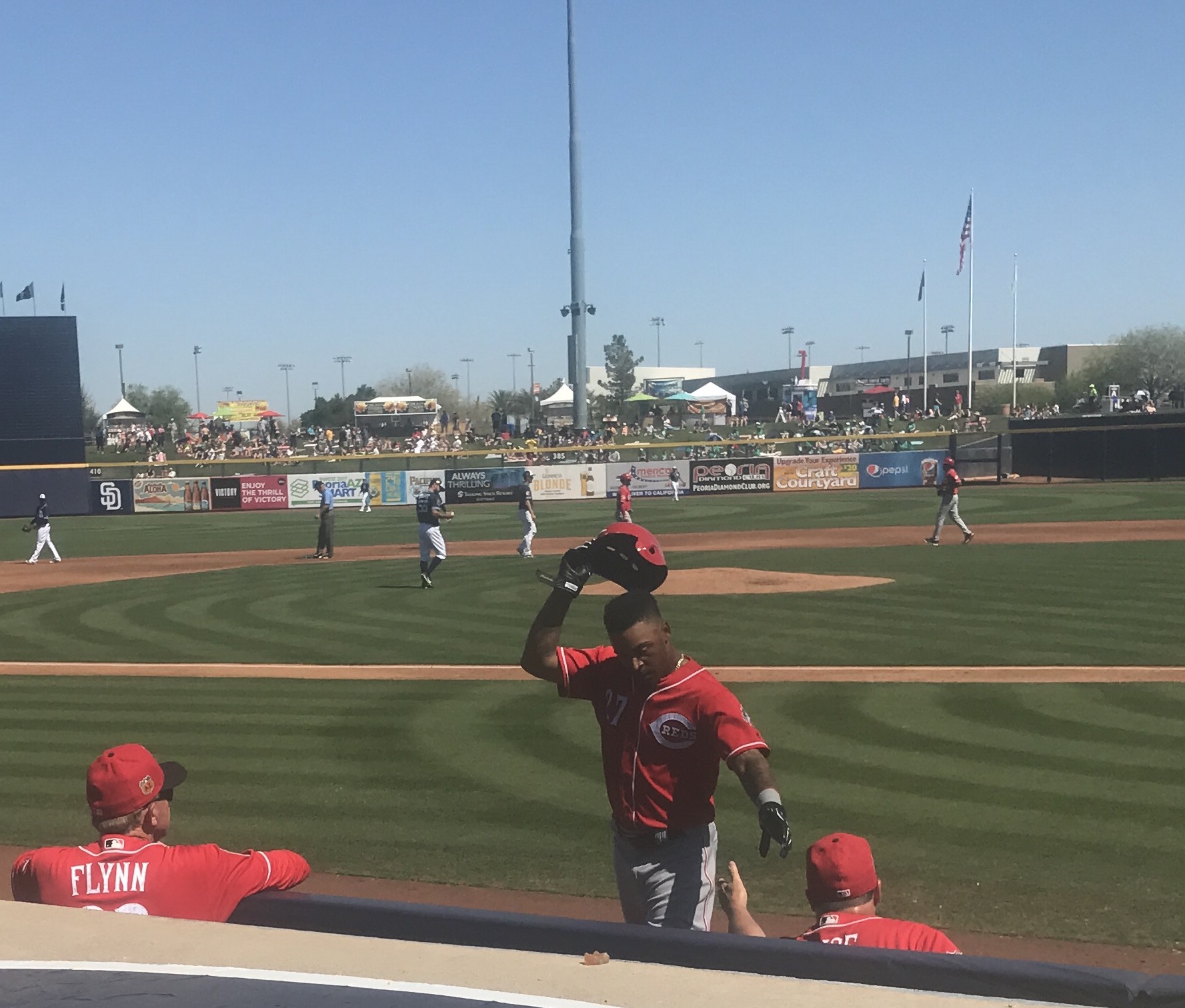 Desmond Jennings after doubling and scoring

Jose Peraza continues to do at the plate what Jose Peraza does. He swings early in the count. He makes good contact. He sprays the ball around. He doesn’t hit with lift, so he doesn’t generate power. Unless Peraza figures out how to elevate his hit trajectory, his offensive value will hinge on a hit tool and speed. Peraza had a couple hits today.

The Reds won 9-4 and remain undefeated since I arrived to Goodyear. Notably, Joey Votto, Billy Hamilton and Devin Mesoraco had the day off. Tomorrow, the Reds play the Kansas City Royals at Surprise Stadium at 4:05 EDT.