Ã¢â‚¬Â¢ Joey Votto, Billy Hamilton, Zack Cozart and Devin Mesoraco hit with the first group. After that were the other guys who were starting in the afternoon game.

Ã¢â‚¬Â¢ Even in batting practice, no one hits like Votto. No pop-ups, no ground balls, nothing soft. Just hard-hit balls all over the yard. He hit line drives over the 3B at will.

Ã¢â‚¬Â¢ Devin Mesoraco looked stiff swinging. Like he was working hard to get his shoulders up high during his swing. More on Mes hitting later.

Ã¢â‚¬Â¢ Desmond Jennings showed a lot of power and hit well around the field. Cozart hit well, too.

Ã¢â‚¬Â¢Ã‚Â David Laurila has an interesting interview with Padres hitting coach Alan Zinter. If you want to get a sense of how advanced hitting instruction is now, read it. It’s a long way from “keep your eye on the ball, kid.”

Notes from the afternoon game vs. the Texas Rangers played at Goodyear Ballpark. 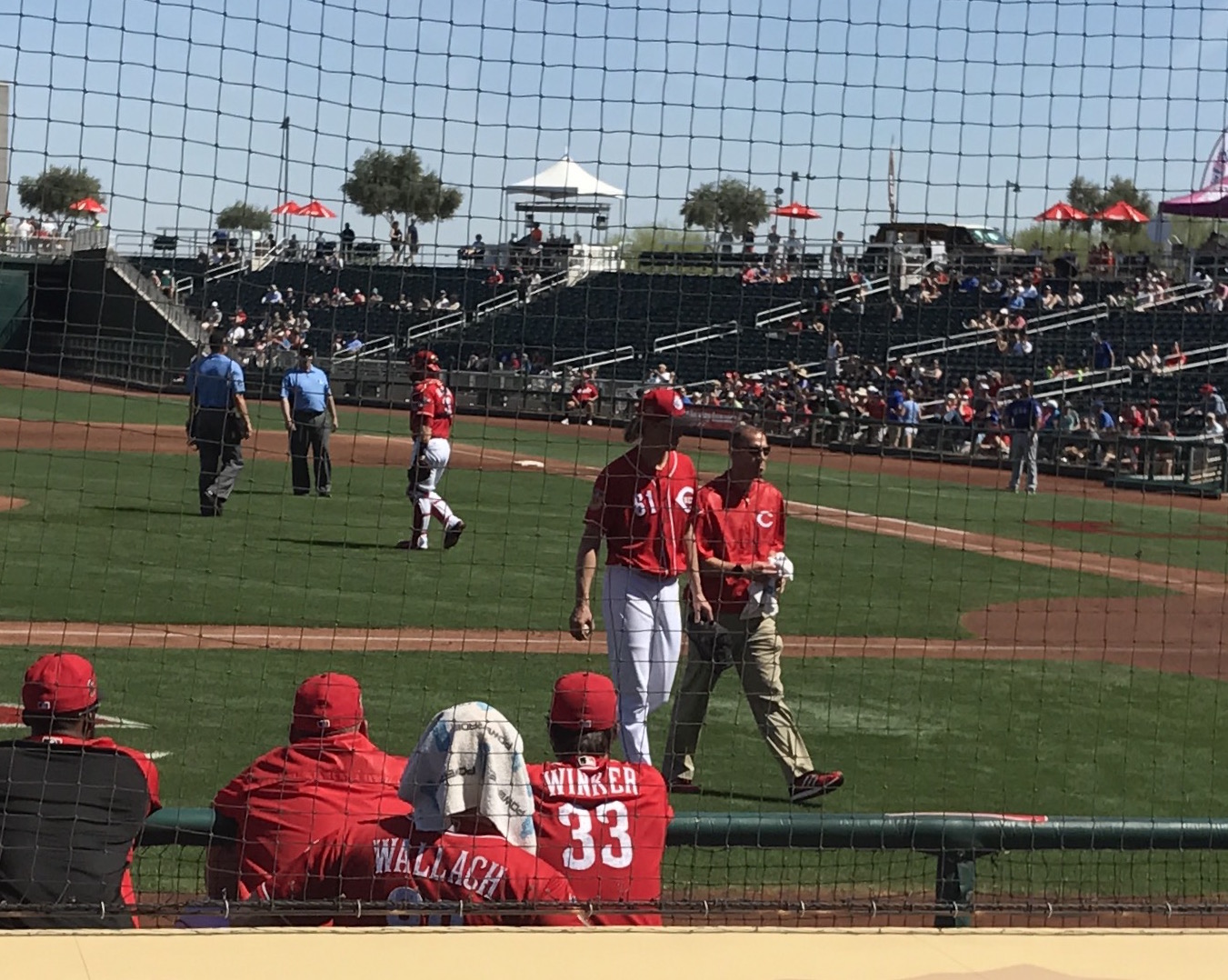 Arroyo leaving the field after being hit in face by ball

Ã¢â‚¬Â¢ Since Bronson Arroyo is OK, a more important question is how was he pitching. Eh. If you thought he was junky before, Arroyo (40) is an uber-junky soft-tosser now. He fooled a few hitters (gloriously, one was Carlos Gomez) but he was also pounded. Joey Gallo hit a line drive homer to right field off Arroyo that I thought might destroy the pavilion. I hate to say this, because I enjoy watching him work, but Arroyo’s pitching comes at the cost of other opportunities. Despite all the injuries, young pitchers are impressing and need a chance. That brings me to …

Ã¢â‚¬Â¢ Get used to thinking of Sal Romano (23, RHP) as a starter for the Reds. Romano made his fifth appearance this spring today. He’s thrown 15.1 innings, with 19 Ks and 3 walks. Today he went 4.2 innings and the Rangers barely laid a barrel on him, including a bunch of major league hitters. The one run he gave up was unearned.Ã‚Â He had three strikeouts, on off-speed pitches. Bryan Price pulled Romano after he recorded two outs in the 8th. The Reds let him bat in the bottom of the 7th. Romano bats lefty and had failed to get a sac bunt down in his first AB.

Romano made 27 starts for AA-Pensacola last year, throwing 156 innings. He was chosen in the 23rd round of the 2011 draft. He’a big guy – 6’5″ and 270 lbs. He throws right over the top. Start your learning about Romano by reading this great postÃ‚Â that Kourage Kundahl wrote for us last September. Bottom line: After today, I’ll be surprised if Romano isn’t put on a schedule to stretch out for a spot on the Opening Day roster. Big news.

Ã¢â‚¬Â¢ Devin Mesoraco caught the first four innings. In his second AB, he smashed a Yu Darvish pitch to deep left center field for a double – a home run at GABP. Best hit of the day for the Reds. 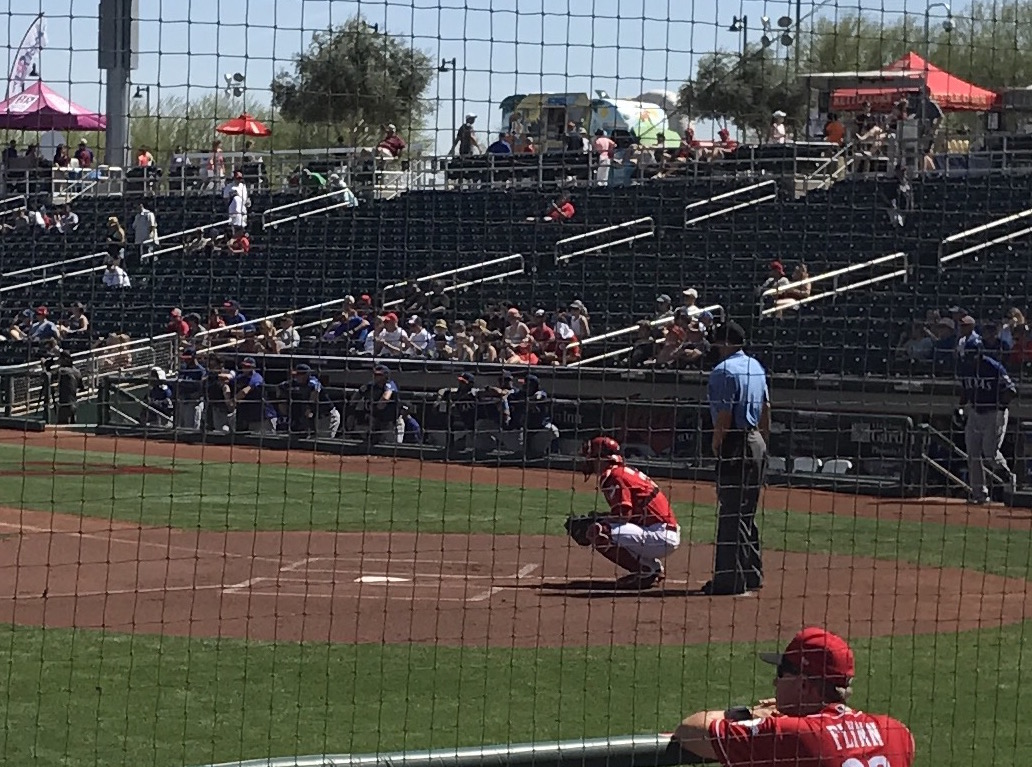 Ã¢â‚¬Â¢ The defensive play of the game for the Reds came from shortstop Zach Vincej (VINCE-ee). In the top of the 7th, Vincej (25) laid out for a ground ball over the middle – he ended up on the 1B side of 2B – bounced up and record the out.

Ã¢â‚¬Â¢ Honorable mention on defense goes to Stuart Turner (25), who caught the rest of the game after Mesoraco left. Turner was a Rule 5 pick this off-season from the Twins. That means if he doesn’t make the Opening Day roster and stay there, he goes back to Minnesota.Ã‚Â I can see where his reputation for great defense comes from. He threw two laser shots to 2B on stolen base attempts and gloved a pop-up leaning far into the Rangers dugout. Mesoraco is going to make the OD roster, so the Reds would have to carry three catchers to keep him and I can’t see Turner’s defense being worth that.

Ã¢â‚¬Â¢ Hate to be negative like this, but Tony Renda was less than great at 2B today. He didn’t field one of Turner’s rifle shots on a SB attempt that was right on the bag. That was the second time in the game he’d failed to make a play. Renda did work a walk off of Darvish and stole second.

Ã¢â‚¬Â¢ The Rangers played the most extreme outfield shift on Joey Votto that I’ve seen. The RF was playing to the center field side of RCF. The CF was playing in left center. All of right field was open. Votto busted a Yu Darvish pitch, but it went right at the RF. Score one for defensive shifts.

Ã¢â‚¬Â¢ Have to question the idea of playing baseball games in Phoenix, building stadiums with less than 20% of the seats in shade, then scheduling most of the games at 1 p.m. Throw climate change in there if you believe in science. Either way, sitting in the sun today was unbearable. Half-way through the game, sections in the sun were vacant. Sections in the shade were full. There’s plenty of shade in the concourse area, just nowhere to sit there.Ã‚Â The thought of leaving early crossed my mind a hundred times. Stayed to see Romano finish.