It was hot, hot, hot in Goodyear yesterday, a climate shock compared to Ohio. It was especially sweltering in the afternoon at the practice facility where the nearest shade is in New Mexico.

The Reds played a couple minor league games against the White Sox organization. I stayed for 4-5 innings. The two fields were adjacent.

Ã¢â‚¬Â¢ Luis Castillo (24, RHP) acquired from the Marlins in the Dan Straily trade pitched. For an inning I stood behind the guy with the radar gun. Castillo was working on off-speed pitches that inning and only threw one fastball – 97 mph. His off-speed pitches had good break. That’s not easy in Aridzona. Here’s a picture of Castillo warming up with Chris Okey. 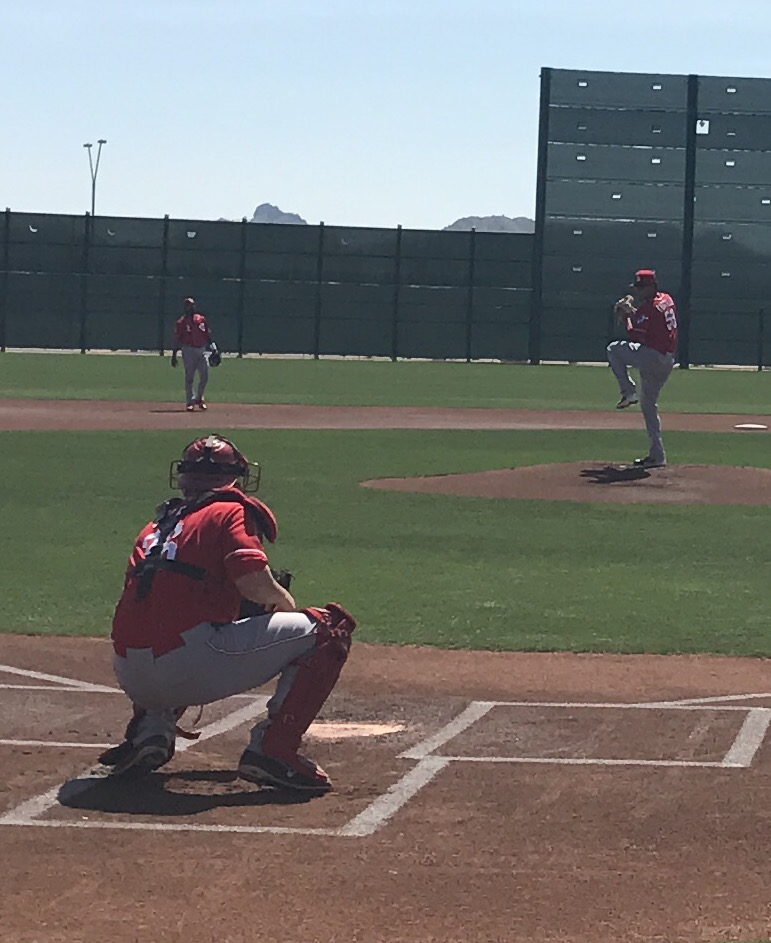 Ã¢â‚¬Â¢Ã‚Â In his first at bat,Ã‚Â Nick SenzelÃ‚Â worked the count and got a line drive hit to left field. In his first chance in the field, Nick Senzel booted a ground ball at 3B with a play at the plate. The Reds coaches I was standing next to didn’t think either the hit or the error was a surprise. Someone with the Dragons told me last fall that Senzel’s maturity – responding to game situations – in the field was the least advanced part of his game.

Ã¢â‚¬Â¢ Corky Miller and his still fabulous mustache were there. Miller was in uniform with a stopwatch in hand. Barry Larkin and Eric Davis (I think) were hanging around, too.

Notes from the major league game

The Reds played as the away team against Cleveland at Goodyear. It was much cooler at night. My seat was good and in the shade. The Friday night crowd was large. Too bad, from a temperature standpoint, more of their games aren’t at night.

Ã¢â‚¬Â¢ Brandon Finnegan started. His 4-inning outing was a microcosm of the way he pitched last year. He struck out five (excellent). He walked three (bad). He got hit pretty hard when he wasn’t fooling hitters by changing speeds. Reminder: His FIP last season was 5.19 and his SIERA was 4.92. His best starts were in August. Another reminder: He’s still 23 years old. Younger than Cody Reed, Robert Stephenson, Michael Lorenzen and Amir Garrett. Heck, he’s younger than Luis Castillo and just two weeks older than a pitcher named Rookie.

Ã¢â‚¬Â¢ My seat was about 10 feet from the Reds on-deck circle toward home plate. Of course, one spring training game is meaningless to judge talent, but it offers perfect predictive power when it comes to creating an impression of player size. Billy Hamilton is little and wafer thin.Ã‚Â Arismendy AlcantaraÃ‚Â is, too. Jose Peraza was on the small side. Chad Wallach, on the other hand, is huge. Ryan Raburn is built. I couldn’t decide whether to describe Scott Schebler as big or stocky. Schebler sure does have easy power. He smacked a double off of Corey Kluber in the first inning. Here’s a picture of Hamilton and Peraza talking before the first inning. I think I mentionedÃ‚Â my seat was good. 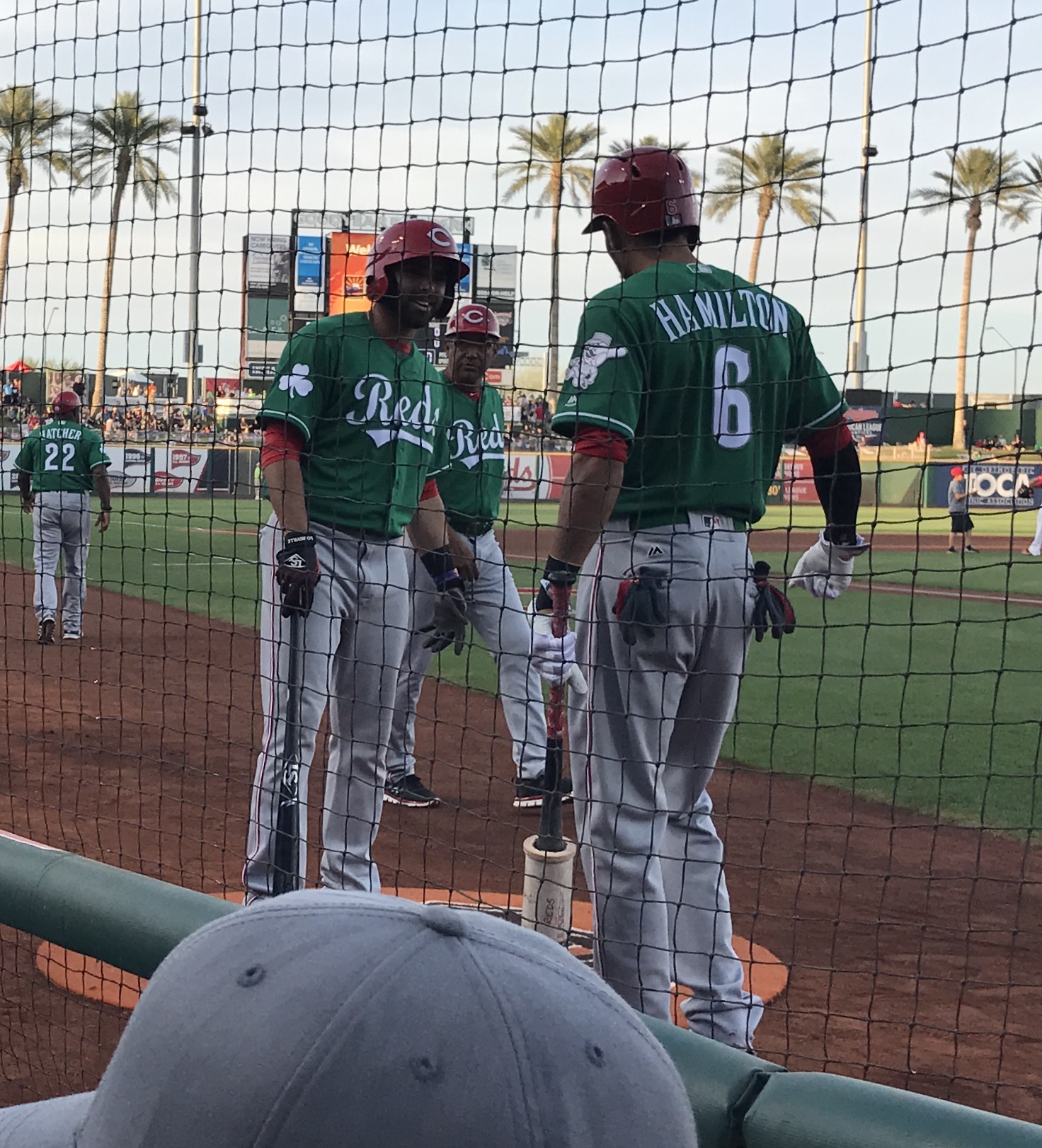 Ã¢â‚¬Â¢ Billy Hatcher is in regular season form sending runners home to their sure doom.

Ã¢â‚¬Â¢ Best defensive play of the night for the Reds was Hamilton cutting off a ball in the right-center gap holding the batter to a single. Best play for Cleveland was by Edwin Encarnacion (you read that right, EE is now playing 1B for our northern brethren) who stabbed a hard-hit ball in the 1B-2B gap. Alcantara was playing SS, but didn’t get a fielding chance. Peraza had a couple difficult plays at 2B,Ã‚Â one he booted and was ruled a hit – a really tough one-hopper right at his feet. Eugenio Suarez made two nice plays at 3B.

Ã¢â‚¬Â¢ Wandy Peralta and Barrett Astin each pitched two innings. Astin was impressive. He doesn’t have the raw stuff that the other guys competing for a bullpen slot do, but his sinker/slider is killer. Astin struck out four tonight. Adam Taylor wrote about AstinÃ‚Â this week, describing him as a bullpen sleeper.

Ã¢â‚¬Â¢ Joey Votto fielded a foul ball behind home plate when he was standing in the on-deck circle. A fan behind me shouted to Votto to toss him the ball. Votto pointed at the high netting and shook his head, but then tossed the ball over the net to that fan. Accuracy grading A+. 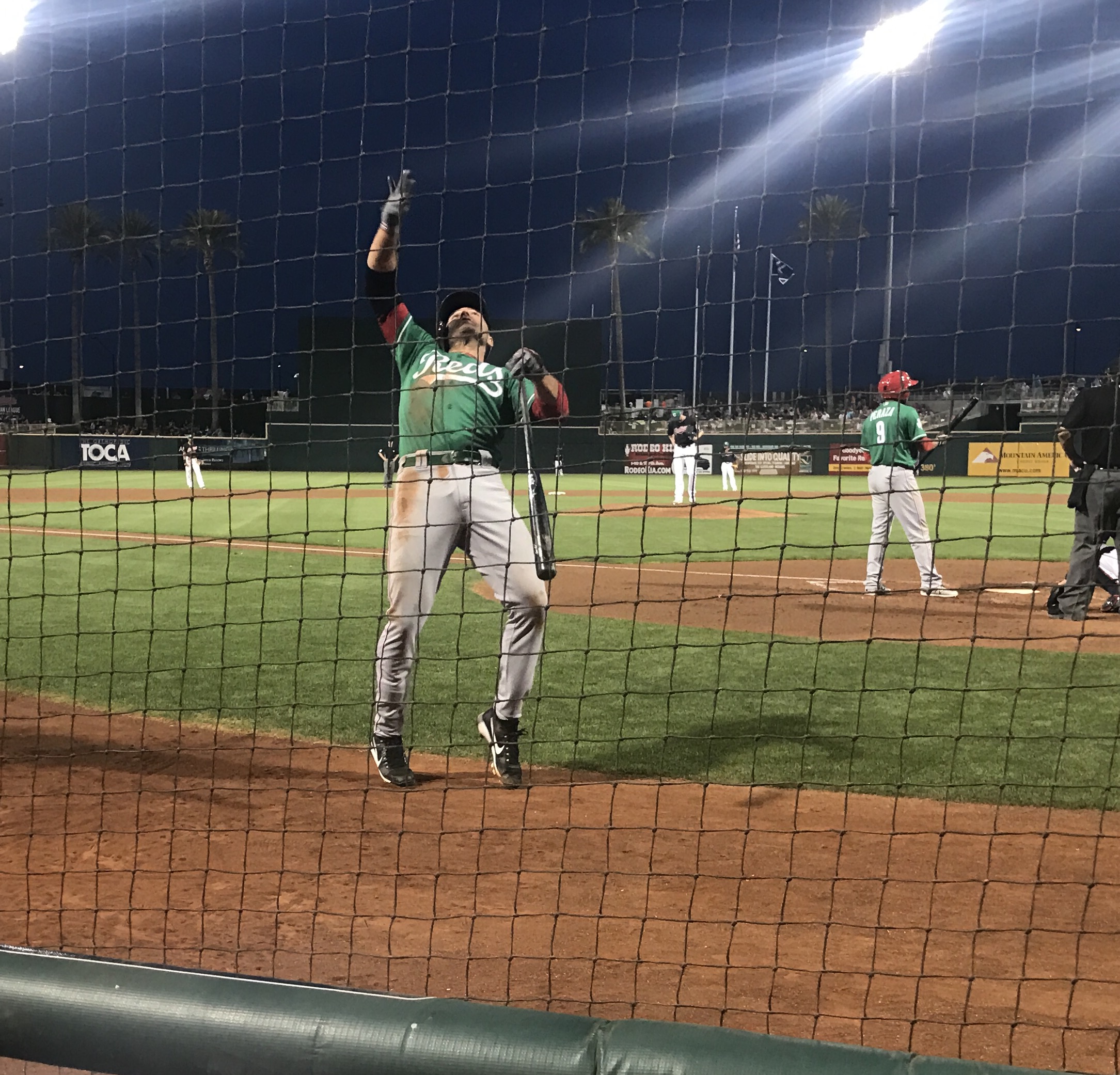 The Reds play the Texas Rangers tomorrow at Goodyear Ballpark at 1:05 p.m.