If you listened to our most recent podcast with Reds broadcaster Chris Welsh (and if you haven’t, go listen to it now!), you heard Welsh talk about his new Baseball Rules Academy project. Over the last couple of weeks, I’ve spent some time digging around the site, and I have to say: I’m very impressed.

According to Chris, Baseball Rules Academy was born because he wanted a “place to look up a rule in a hurry.” And if you go to the front page of the site, that’s exactly what you can do: there’s a search box and you can type in your question and get quick answers. For example, I searched for “catcher’s interference,” and I got 98 results, both text and video, that told me everything I’d ever need to know about catcher’s interference (and more).

Essentially, the brains behind the Academy* — over four years — rewrote the entire baseball rule book, made it searchable with explanations for obscure rules and interpretations, and added a boatload of videos that help you understand how the rule is to be applied. It’s a slick user experience, and very intuitive. There’s also a well-designed mobile site; I can guarantee I’ll be using the mobile version at my kids’ tournaments this summer to decipher what an umpire should have done on the rare occasion that these amateur umps get a call wrong.

*Among those brains, in addition to Chris, is Ted Barrett, a big league umpire for 17 years.

It’s an incredibly deep site, with plenty of content for the average user. The real meat of the site, of course, is in the member’s area. I was able to access and play around with the member’s content, and there are the things you might expect, like more videos and “insider reports” on any number of baseball-related questions. 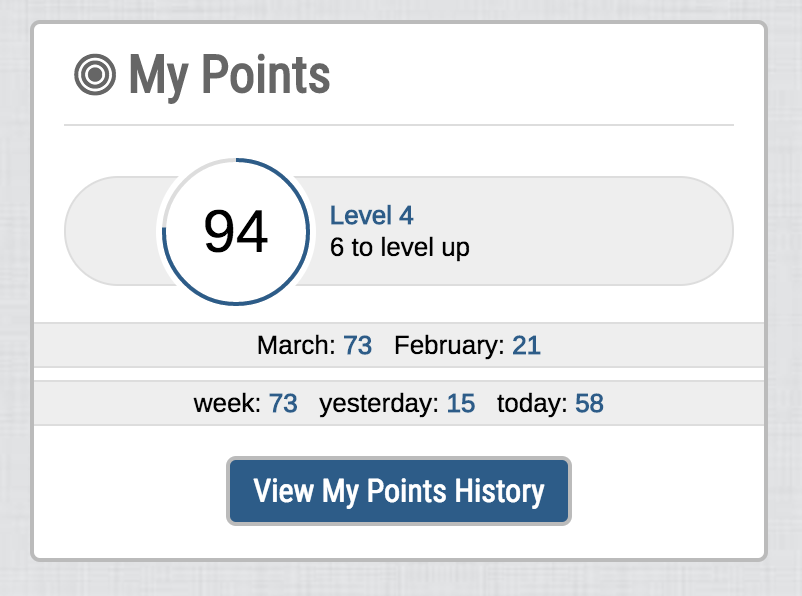 The fun part, however, was how they tried to turn the entire experience into a type of video game. Look over there to the right. At the center of the user dashboard, it shows how many points you have earned by participating in various activities on the site (such as logging in each day, or reading an insider report). Users can level up by earning points, and there’s also a scoreboard on your dashboard that shows how you rank among other members of the site.

The heart of the leveling-up experience revolves around the “Academy Courses”, which are your typical internet courses — you may have been forced to take such a course in your job, as I have — revolving around such subjects as Batter, Pitcher, Runner, and “Interference, Obstruction, and Base Path Collisions.” Beneath those headings are individual courses (such as defensive interference, offensive interference, batter interference, obstruction, etc.). 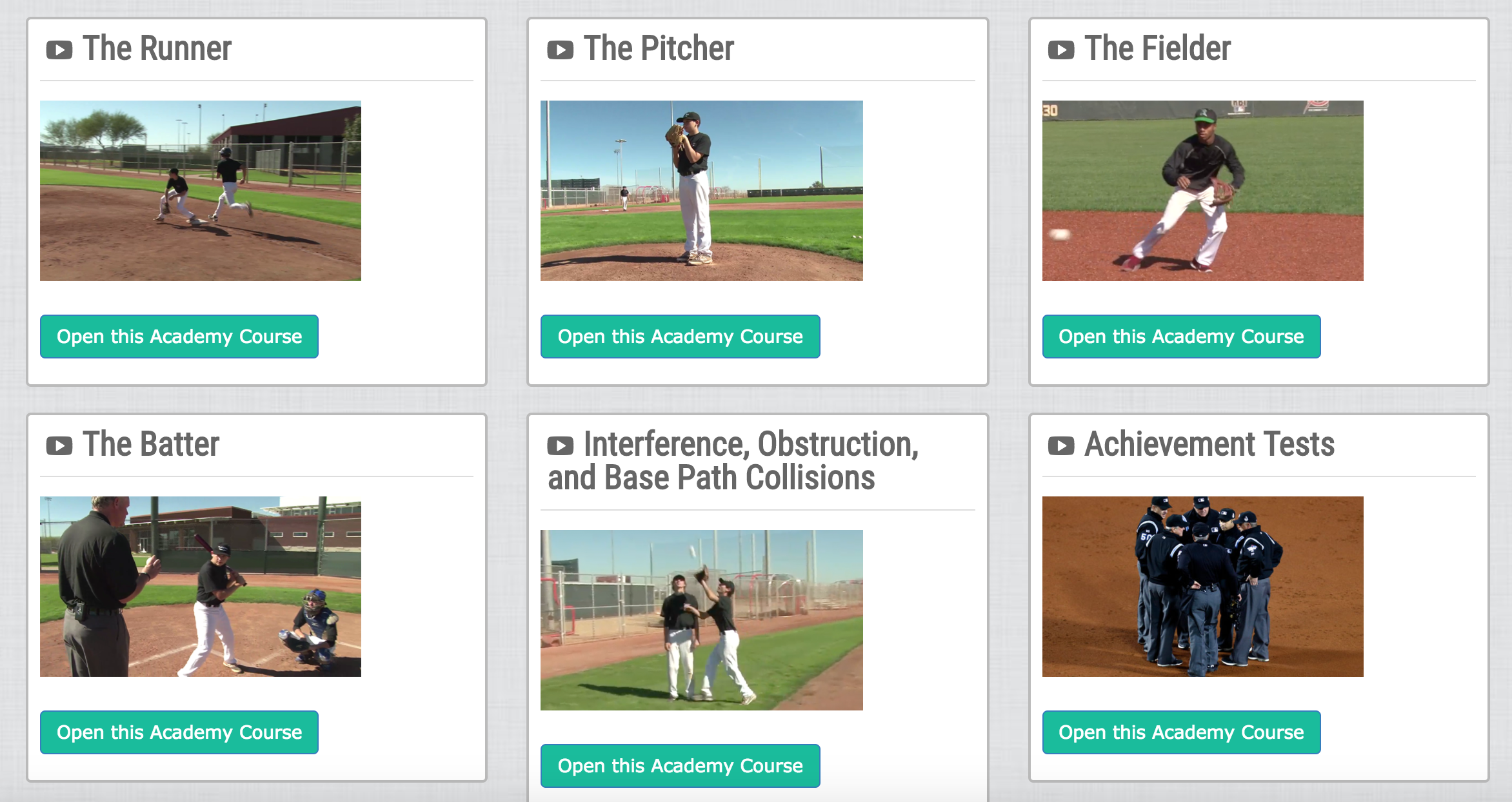 The idea is to progress through the courses, leveling up while you learn about various rules and their interpretations. This was less dry than you might expect, as they’ve combined text with video — mostly starring Welsh and Barrett — showing how the rule is applied on the field. As I understand it, the plan is to add courses that will actually train umpires, as well. 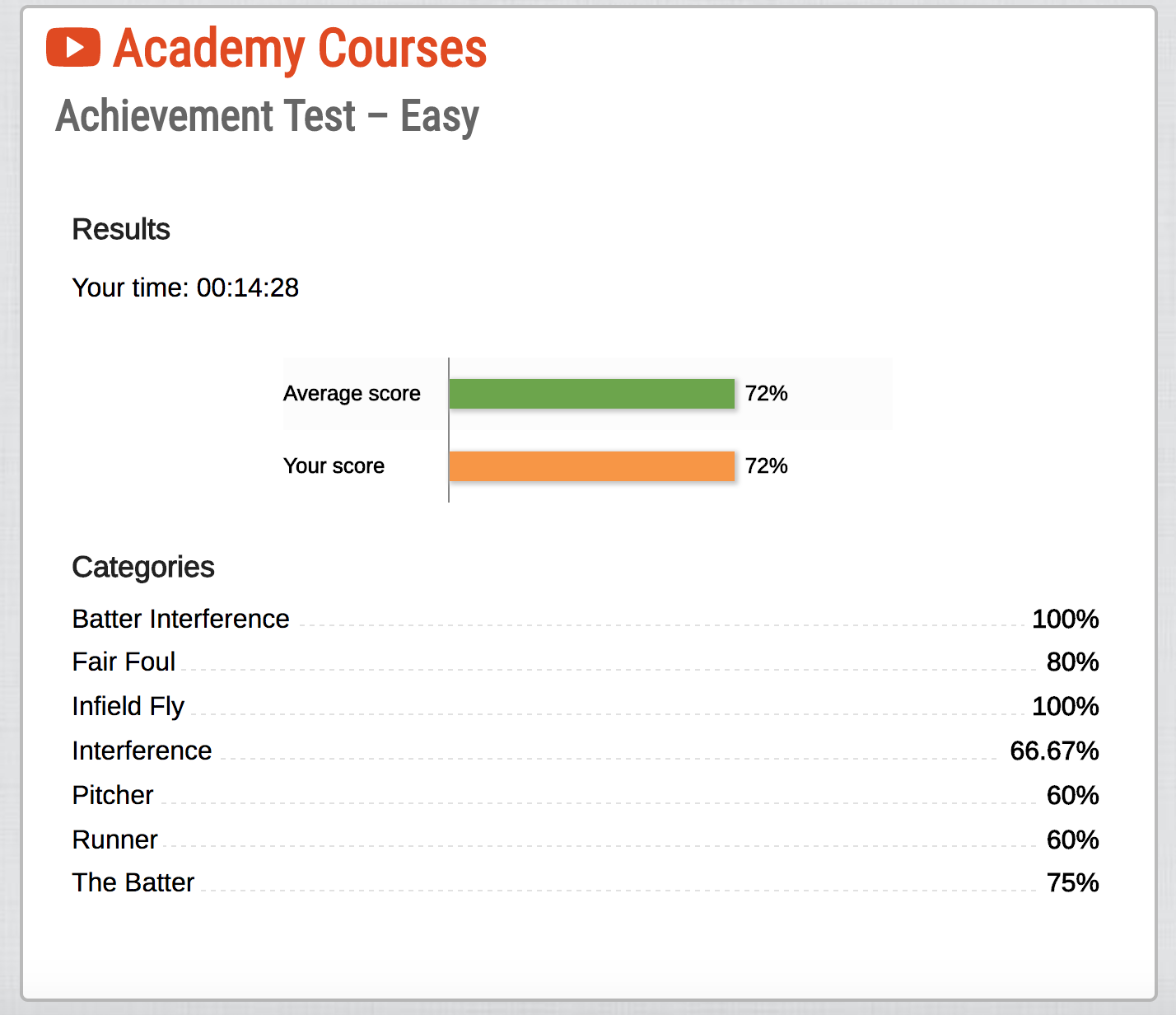 Further, there were a number of “Achievement Tests,” online quizzes that test you on your knowledge of various scenarios. You’re graded and it’s all part of the leveling-up process. Some of the questions are ridiculously easy, but most involve some thinking and interpretation. I discovered that I knew less about certain rules than I thought I did, so now I’m sad. Thanks, Chris!

Obviously, you can track your progress over time, and against other users. If you’d have told me the idea was “baseball rules as a video game,” I would probably have been skeptical. But they make it work somehow, and it enhances the experience, giving you reason to dip back into the content in order to keep earning points.

But it’s not just a video game, obviously. The site is designed to appeal to hardcore baseball fans, but it’s also a good resource for the average joe who just has a random question while watching a game. Interestingly, it appears that the Academy wants to be a clearing house for rules from various leagues, professional and amateur, including softball.

Both of my kids have played travel baseball and softball, and I can tell you that there have been many times that I wanted to find the rules for whatever youth Association was putting on a particular tournament. Those rules aren’t always easy to find on a mobile device. If the Academy can get them all — USSSA and ASA are two that I have needed, in particular — under one roof and searchable, that would be a great resource for the increasing number of parents who spend every weekend in the spring, summer, and fall on the baseball or softball field. #alwaysbaseballseason

I really don’t want this to come across like an ad. Certainly, I like Chris Welsh and he’s always been kind to Redleg Nation. But go dig around the site and draw your own conclusions; if you’re a baseball junkie — and you probably are if you’re reading RN — you’ll find something that interests you.