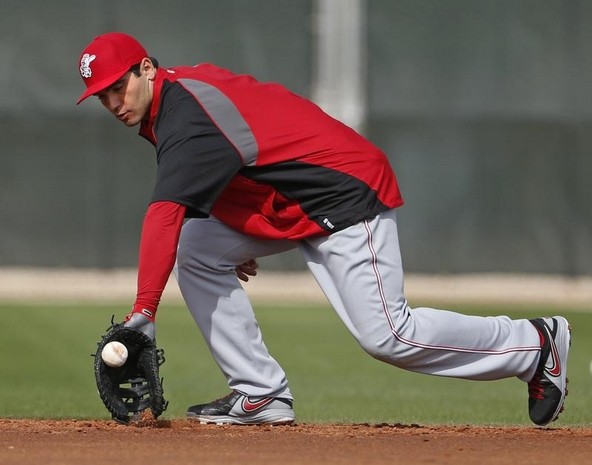 There are several Reds-related items worth reading today, so I thought I’d collect them into one post here for your convenience. You can thank me later.

First, Zach Buchanan has an update on Dilson Herrera’s shoulder:

Second baseman Dilson Herrera and right-hander Nick Travieso are both working back from shoulder ailments, but thereÃ¢â‚¬â„¢s no hard timetable for either to complete a throwing program and return to full duty. Travieso, who had a cortisone shot to inflammation last week, is still working through his long toss progression. Herrera has been able to hit in games, but has yet to play the field.

Travieso is almost certainly ticketed for extended spring training given how long it takes for a starting pitcher to prepare for the season, but Herrera still has some time to find his way on the field with three weeks remaining in spring. Price anticipates the young infielder will make his debut at second well before that, but there will be a point where his roster chances will be affected.

Ã¢â‚¬Å“If two more weeks go by and heÃ¢â‚¬â„¢s not in games, thatÃ¢â‚¬â„¢s not a lot of time to evaluate,Ã¢â‚¬Â Price said.

You can still consider me skeptical on Herrera. That skepticism, of course, isn’t about his talent; this kid can really play, and he’s swinging a nice bat so far this swing. I’m just concerned that he’s had a sore shoulder for three seasons now. Something’s not right.

Buchanan also talked to Bryan Price about the ongoing competition for spots in the Reds rotation, and Christian Walker‘s introduction to Reds camp. Go check that out (then come back here).

—–
You might expect that we’re going to talk about defense when you see a headline that reads “The Thing Joey Votto IsnÃ¢â‚¬â„¢t Good At.” Well, you’d be right, but it isn’t what I expected.

Over at Fangraphs, Eno Sarris dug deep into Votto’s struggles with the glove. We all know how bad Votto was defensively in 2016 — both the eye test and the metrics confirm that — but there’s a pretty good argument to be made that Votto had been above-average in every previous year.

Certainly, you would expect a player to decline as he ages (our recent experience with Brandon Phillips confirms that), but I’m optimistic that Votto will be able to make 2016 a one-year anomaly, and that he’ll be able to improve somewhat this season.

ThatÃ¢â‚¬â„¢s alright, he knows itÃ¢â‚¬â„¢s a problem. Ã¢â‚¬Å“IÃ¢â‚¬â„¢ve always tried to be as good a defender as I can be,Ã¢â‚¬Â he pointed out, before admitting that last year was a down year. Ã¢â‚¬Å“I felt like last year I was just not as prepared, not as disciplined Ã¢â‚¬â€ as immersed Ã¢â‚¬â€ as I should have been with something that, in my opinion, I view as probably one of the weaker aspects of my game.Ã¢â‚¬Â

Maybe itÃ¢â‚¬â„¢s surprising to hear Votto express discontent about an aspect of his game at which heÃ¢â‚¬â„¢d mostly excelled before last year. Between 2008 and 2015, he was the sixth-best first baseman by UZR/150 (and third-best by total UZR). Watch him, looking athletic in his high socks and tight pants, and he passes the eye test most years. …

Ã¢â‚¬Å“Byproduct of diligent, consistent, boring work,Ã¢â‚¬Â said Votto of his earlier good numbers. Ã¢â‚¬Å“With the mentality that you are not good at this, you have to work at it. Hitting, on the other hand, I can do a lot of cool things offensively with a medium amount of effort, but to be in the same conversation for leader, best, I have to take the same kind of approach: obsessive, consistent, detail-oriented work.Ã¢â‚¬Â

Go read the rest of Sarris’ piece. I love these interviews with Votto where he demonstrates what a thoughtful player he is.

—–
Speaking of Eno Sarris, he had this terrific piece yesterday in which he talked to Cody Reed about avoiding predictability with his pitch selection. Reed said he has learned a lot from former teammate Dan Straily:

Cody Reed averages 93-plus from the left side, which is like 94-plus from the right. His sinker gets two inches more fade and three inches more drop than the average lefty sinker. HeÃ¢â‚¬â„¢s got a really nice hard slider that got above-average whiffs last year. His changeup doesnÃ¢â‚¬â„¢t look great by movement, but it got above-average whiffs. The fastball and slider, at least, are major-league worthy.

Reed also gave up twelve homers in ten starts and had an ERA over seven last year. But he knows what he wants to work on. Ã¢â‚¬Å“My change is one thing IÃ¢â‚¬â„¢m working on,Ã¢â‚¬Â the lefty said in camp on Tuesday. Ã¢â‚¬Å“I got into counts where I couldnÃ¢â‚¬â„¢t throw it. I wasnÃ¢â‚¬â„¢t confident enough to throw it.Ã¢â‚¬Â

He had a role model on his team last year that showed him the way forward. Ã¢â‚¬Å“IÃ¢â‚¬â„¢d love watching [Dan] Straily pitch,Ã¢â‚¬Â Reed admitted, despite the veteranÃ¢â‚¬â„¢s slower fastball. Ã¢â‚¬Å“HeÃ¢â‚¬â„¢d go 2-0 and boom, flip a change in there, and heÃ¢â‚¬â„¢s back in the count. I couldnÃ¢â‚¬â„¢t do that.Ã¢â‚¬Â

Again, I urge you to read it all; lots of good details about Reed’s efforts to mature from a “thrower to a pitcher.”

—–
Zach Buchanan also has this interesting profile of young pitcher Sal Romano, that delves into the circumstances around his first pro contract and withdrawal from school at the University of Tennessee. (He still knows the words to “Rocky Top,” which kinda makes me sick to my stomach.)

Anyway, Romano has probably improved his stock within the organization more than anyone over the last year. This spring, he’s made three appearances and has looked very good in all of them; Romano leads the Reds in strikeouts thus far. Perhaps he’ll reach his goal:

When he signed, Romano told himself he wanted to be in the majors by 23. Seras made him a similar guarantee.

By the way, I always feel compelled to note that we’re not talking about this Sal Romano.