You know when you have a puppy and at first it’s really energetic almost to the point of impracticality? Like all it wants to do is run, destroy your personal belongings, eat, eat your personal belongings, and occasionally sleep. That’s what this rebuilding Reds team has felt like. There have been spurts of productive potential, but mostly the team has just been butchering the game of baseball or sleep-walking through the season.

However, puppies, like the Reds, eventually mature into spry, house-trained dogs. The energy is still there, but it’s directed. Their legs match the size of their feet. That’s where the Reds seem to be at in their youth movement, or at leastÃ‚Â elder statesman Joey Votto thinks so.

“IÃ¢â‚¬â„¢m excited about this next group. I like to see guys find themselves. IÃ¢â‚¬â„¢ve enjoyed watching Billy (Hamilton), (Scott) Schebler and (Adam) Duvall improve and be All-Stars,” Votto told the Associated Press a few days ago. The article, headlined “Reds star Votto says he’s energized by team’s youth movement,” points to an anticipation for moving past the growing pains and letting the dogs eat.

A year ago, I wrote on the Reds’ youth movement, mainly focusing on, well, whether it even existed. I found a resounding ‘yes, it does,’ as the Reds had the youngest team in the league and the third-lowest average service time. Performing the same analysis at this stage in spring training, however, is foolish. Until the Reds (and the rest of the league) finalize their Opening Day rosters, it’s difficult to compare how young teams will end up being.

That said though, we do have a pretty good idea of the projected starters and rotation, which is the backbone of the roster anyway. 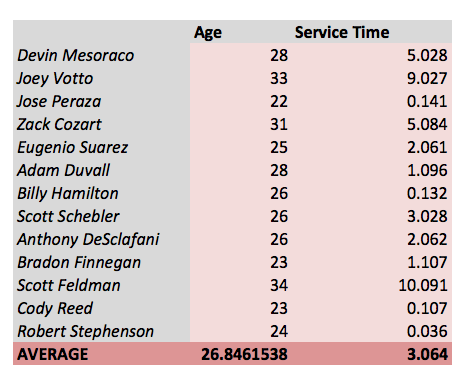 Compared to the full 25-man roster from last year, the Reds have actually shaved two years off their age average from 28.36 and only addedÃ‚Â five days in terms of service time. Take those numbers as you may, but remember that Amir Garrett, Dilson Herrera, Jesse Winker, Michael Lorenzen, and Raisel Iglesias are not included in the above group.

What’s concerning about the degree of the Reds youth though is that their closest comparison according to last year’s graph would be the Arizona Diamondbacks…who finished one game better than the Reds. If the trends can be believed (and judging by the sketchiness of my data, they shouldn’t be), then Joey Votto’s optimism for this group of kids is unfounded. Yes, Brandon Phillips has cleared the logjam, but any hope for a dark horse run at the playoffs still seems to be a season off.

On a less negative note, welcome to rock bottom Reds fans. This roster finally represents the culmination of the youth movement we’ve been hearing about for two years. The structural issues have been addressed, and now its time for the rebuild to actually start. Whether the Reds will move at the Cubs’ pace (Nick Senzel mid-July call up?) or take their time with it, the fog has lifted.

Maybe that’s why Joey Votto is energized, because even though the Reds have technically taken a step backward by the numbers,Ã‚Â their path to success is finally clear. One step back for two steps forward. Oh, and by the way: do you know what the average age of the Cubs’ starters and rotation was at this time last year? 28.6.