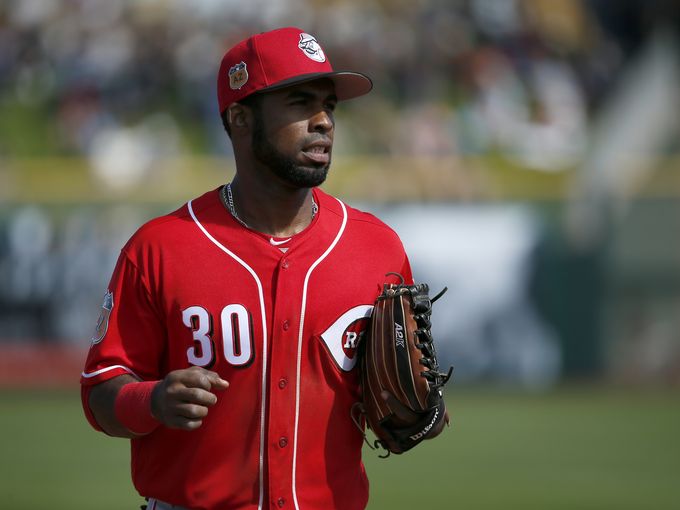 The Good
–The weather was good, the crowd was big, there was excitement in the air. Baseball has returned. Specifically: the Cincinnati Reds were back on the field, playing their first Cactus League game of the spring. If that doesn’t excite you, I don’t know why you’re reading a Reds site in the middle of winter. Seriously, what’s wrong with you?

–After the top of the first, it appeared that the 2017 Reds were about to launch themselves into the stratosphere. With one away, Arismendy Alcantara lined a ball into the left-center field gap for a single.

But wait! Alcantara tore out of the batter’s box and didn’t slow down as he rounded first, sliding head-first into second ahead of the surprised San Francisco throw. After Adam Duvall walked (!) and Jesse Winker was hit by a pitch — with the bases loaded — Patrick Kivlehan singled sharply to left. Alcantara and Duvall scored, and the Reds were ahead 2-0.

–The Giants got a run back in the bottom of the first, but the Reds jumped right back on the horse in the top of the second. Tony Renda led off the inning with a triple to right. One out later, Jose Peraza dumped a single into center field, scoring Renda and giving the Reds a 3-1 lead.

–By the time the seventh inning rolled around, Cincinnati’s lineup consisted of the AA/AAA Travelin’ All-Stars, but they were able to push across the team’s final run of the day. Blake Trahan struck out, Hernan Iribarren scratched out an infield single, Gabriel Guerrero walked, and then Aristides Aquino singled to left, scoring Iribarren.

The offense was done for the day at that point.

–Rookie Davis started the spring opener, and he was a little uneven in his two inning stint: one run allowed on four hits, with two strikeouts and no walks. But if you watched closely (the Giants streamed the game online), you may have seen something very interesting about Davis.

Would be interesting to know what the radar gun says about Rookie Davis right now. Appears to be throwing hard.

It just looked on the grainy online streaming video that Davis was throwing very hard. Turns out, that wasn’t just an optical illusion.

No pitch f/x here, but heard Rookie was sitting 93-95 mph in the first inning.

This would be great sign. He didn't do this last season at all. Dealt with a few different nagging injuries. https://t.co/msXaiFo4sd

Why that’s interesting is that Davis threw 90-91 last year. He says he’s fully healthy now (In the best shape of his life!), and he’s already hitting 95 on the radar gun, very early in the spring.

You can’t draw any conclusions based on anything you saw today, but Davis’ velocity is certainly an encouraging development.

–Sal Romano pitched the next two innings, and he looked better than any Reds pitcher today: no runs allowed on one hit and two walks, striking out four San Francisco hitters.

–Reds pitchers struck out 10 Giant hitters. Barrett Astin, in particular, struck out two in his one inning of work. Astin is a guy that has a chance to work his way into the conversation for the bullpen, I think.

The Bad
–I guess you know where this is going. We’ve seen it many times before: the bullpen blew a lead in the ninth inning.

Cincinnati led 4-3 as the Giants came to bat in the bottom half of the final frame. Reds manager Bryan Price sent Kevin Shackelford — wearing uniform number 89 — to the mound, looking for his first save of the 2017 spring season.

Shackelford walked the leadoff hitter, then surrendered a single to left. Chris Marrero proceeded to hammer a three-run homer to left, a walkoff win in the first game of the spring. Reds fans everywhere could be heard to groan. This again?

Not-So-Random Thoughts
–Baseball is back! Who cares about the result, I’m just happy to have some actual baseball to talk about here at redlegnation dot com.

–The Reds employed a number of defensive shifts today; it looked like they were in midseason form. Giants announcer Jeremy Affeldt — a former Reds pitcher — complained all game long about how often the Reds were shifting. In spring training, no less!

I don’t really understand that complaint, but whatever.

–I promise the bullpen is going to be much, much better this year! In fact, I think the Reds will likely have one of the better relief corps in the National League, presuming everyone stays healthy.

–I can feel it happening. If Arismendy Alcantara gets any playing time at all, he’s going to be one of my favorite players.

Reds baseball is back! pic.twitter.com/qASoyAh1PH

There is literally nothing like hearing Marty Brennaman's voice for the first time in springtime.