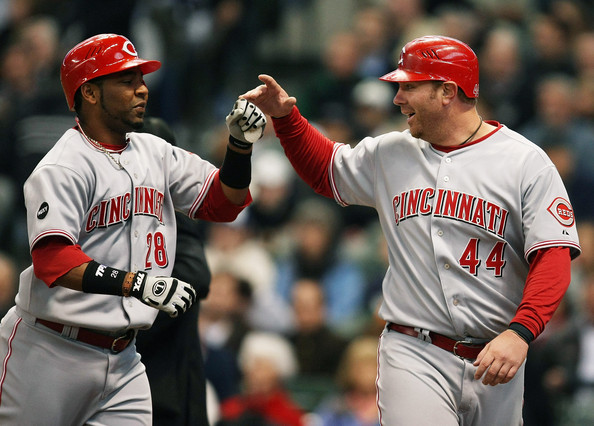 Daniel Matthews has contributed here at Redleg Nation a few times previously (here is his most recent contribution), and we’re always happy to have his perspective. Enjoy!

I know that 1995-2016 actually covers 22 seasons, but just go with me on this one. As spring training is less than a month away and the 2017 season is creeping ever closer, IÃ¢â‚¬â„¢ve been thinking about how much baseball history we have seen in recent years.

One could make the argument that, from 1995-2016, we saw the greatest 20+ year period in baseball history. Of course, this is biased because none of us ever saw Cy Young, Christy Mathewson, Ty Cobb, Lou Gehrig, or Babe Ruth. For baseball to increase in popularity in the last two decades was vital, especially coming off the strike in 1994 which kept fans away for years, some of whom never returned.

And did we have them.

Additionally, these years were also the peak for the construction of updated, retro-style ballparks. Fenway Park, Wrigley Field, and Dodger Stadium are the three oldest ballparks in baseball, but even if clubs did not build new parks, renovations were done (like Kansas CityÃ¢â‚¬â„¢s Kauffman Stadium in 2009). Beautiful, new venues like Busch Stadium, PNC Park, AT&T Park, and our own Great American Ballpark are now centers of historic downtowns thriving and eager for each April when baseball returns.

Of course, as Reds fans, we witnessed some great moments during those years as well.

The next score in baseball history will include some great moments, and here are a few we will hopefully witness as Reds fans:

IÃ¢â‚¬â„¢m optimistic about the future of the Reds. For once in a long time, I trust this front office and its personnel decisions. The trade with the Marlins, the free agent signings of Drew Storen and Scott Feldman, and the quality of players picked up in the 2016 draft give us many reasons for hope that signing washed-up, former Cardinals in their late 30s to multiple years will no longer be the norm.

As I get older, I still love my team I grew up with, and I look forward to making several trips to GABP every summer. However, as also a general fan of baseball, I enjoy watching moments and stars that make this game like no other.

We saw some great players in the 90s and early 2000s with the likes of Ken Griffey Jr., Barry Bonds, Mark McGwire, Sammy Sosa, Mike Piazza, Derek Jeter, Alex Rodriguez, et al. But those were different players in an era where the home run ruled the game, and front offices valued two or three stats over everything else. Baseball was popular in the late 90s and early 2000s, but todayÃ¢â‚¬â„¢s game just has a different feel to it.

Now, its popularity is soaring. People have been flooding to the ballparks the past several years (even in the minors in recent years as well) and TV deals are worth billions. I believe that is due in large part to the aforementioned nucleus of stars who are dominating todayÃ¢â‚¬â„¢s game.

WeÃ¢â‚¬â„¢re in a different era, and this generation of stars is unlike any other in recent years. Take Mike Trout, for example. He put up a 10.8 WAR in his rookie season. Bryce Harper may end up signing the first 400 million dollar contract in baseball history. Clayton KershawÃ¢â‚¬â„¢s stats are comparable to Sandy KoufaxÃ¢â‚¬â„¢s. And do we really have to say anything else about the greatness of Joey Votto? The question now is: how many Hall of Famers are playing on a nightly basis?

So as we look forward to what the 2017 MLB season has to offer us as Reds fans, perhaps it is best that we also reflect on what we have witnessed in recent years and then realize that we just might be watching the greatest generation of players this game has ever seen.