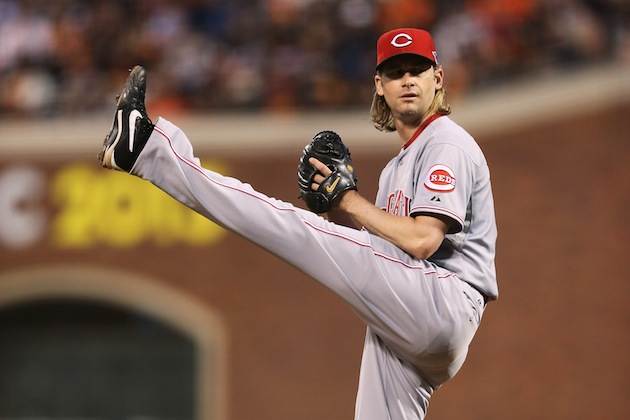 We noted last week that the Reds were in discussions with Bronson Arroyo about a return to Cincinnati. It’s starting to look like it’s going to happen, you guys!

Reds and Bronson Arroyo are working on a deal and a reunion is considered "likely" at this point, source tells SBN. Nothing confirmed done.

It emerged recently that the Reds had taken a look at former righty Bronson Arroyo. Though the level of the teamÃ¢â‚¬â„¢s interest wasnÃ¢â‚¬â„¢t clear at the time, it seems now that the organization saw some promise in the veteran starterÃ¢â‚¬â„¢s workout. Indeed, Cincinnati has engaged Arroyo in contract talks that appear likely to result in a deal, according to a report from Chris Cotillo of SB Nation reporting (on Twitter).

Cincinnati has made clear that it isnÃ¢â‚¬â„¢t interested in handing out any more major-league deals this winter, so any arrangement with Arroyo would be of the minor-league variety. ThatÃ¢â‚¬â„¢s unsurprising, as Arroyo is less than a month away from his fortieth birthday and over two-and-a-half years removed from his last MLB appearance.

Bronson Arroyo remains popular in Cincinnati, so I’m sure this news will be met with joy in some corners. But let’s be sure to pump the brakes a bit. There should be no expectation that Arroyo will actually contribute to the club in 2017.

But — though there’s certainly room for disagreement — what I said last week still applies, to me, at least. ThereÃ¢â‚¬â„¢s very little downside, in my opinion.

The Reds need innings-eaters in 2017. Arroyo used to be an innings-eater. Sure, he hasnÃ¢â‚¬â„¢t pitched in a couple of years, but weÃ¢â‚¬â„¢re just talking about a minor league contract. If Arroyo can make it back from injury, maybe he can give the Reds some decent innings Ã¢â‚¬â€ plus be a veteran presence around all the young pitchers we expect to see in Cincinnati this season.

If nothing else, itÃ¢â‚¬â„¢s an interesting storyline for me to write about, and thatÃ¢â‚¬â„¢s enough for me.

We’re not talking about the Scott Feldman acquisition, where — though I like Feldman a lot — there is very real reason for concern that the Reds have inexplicably promised him a starting spot, possibly at the expense of the young guns on the horizon. We’re talking a minor league deal with potential upside, and no downside. Bring it on.

Plus, as RN’s Wes Jenkins noted way back in December:

Bronson Arroyo is probably your motherÃ¢â‚¬â„¢s favorite baseball player. He has those long luscious locks that swish just so when he follows through. His leg kick defies convention just enough while still vaguely resembling the iconic Rockettes. And of course, he plays the guitar when heÃ¢â‚¬â„¢s not taking the field. Bronson Arroyo is a bad boy without being a bad boyÃ¢â‚¬â€œthe guy brought home for Thanksgiving that Dad thinks isnÃ¢â‚¬â„¢t good enough to be with his daughter but Mom defends because she just needs some adventure in her life.

Bronson Arroyo is also my momÃ¢â‚¬â„¢s favorite baseball player so thereÃ¢â‚¬â„¢s that.

Bronson makes things more interesting around these parts. Again: that’s enough for me.