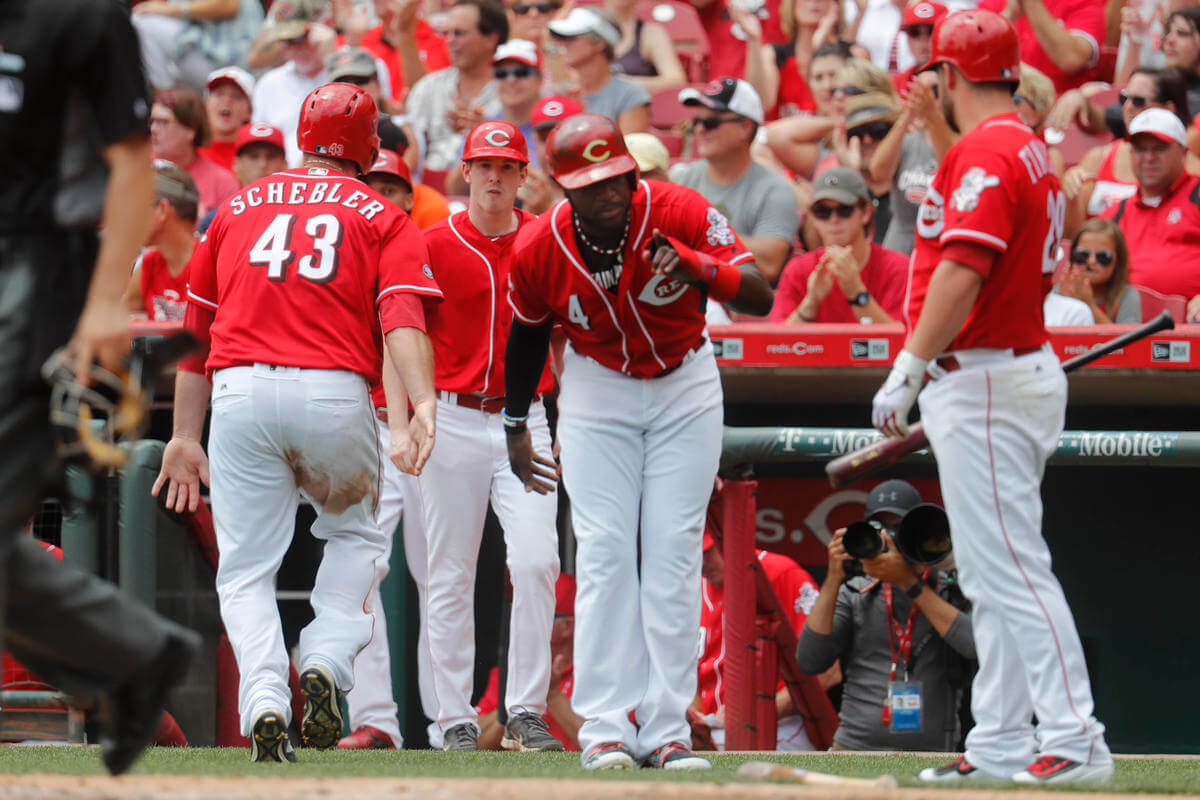 Welcome to Wild Speculation about the Future of the Baseball Men of Cincinnati.

Today, in my infinite wisdom, I have decide to predict and discuss what I think is the most likely starting lineup for the Reds on Opening Day in 2018 and after the All-Star break that year. Let’s take a look and then, later in the comments, you can tell me how terrible I am.

There isn’t much controversial here, but a few things might raise an eyebrow. I’m betting on Jesse Winker and predicting that Schebler beats out Adam Duvall for playing time in the long term. It’s become a running joke both here and on Twitter) that I seem to have it out for Duvall, but I don’t. Really, I hope he proves me wrong, but I haven’t seen anything in his numbers to make me think he’ll avoid serious regression and most of the analysis to the contrary seems to arbitrarily decide that his decrease in power in the 2nd half was temporary while his increase in walk rate was deliberate and permanent. This is sketchy reasoning (go look at how differently he was pitched in the 2nd half). The Reds need OBP and I think Winker can provide it.

At the bottom of the order, I’m betting against players with injury issues. I’d like to slot Homer Bailey as the pitcher, but the certainty of Tommy John recovery isn’t what many think it is. The truth is that most pitchers who get it never return to form and many never return to truly regular playing time. And as for catcher, I have to assume Devin Mesoraco is done until he proves otherwise.

Now this is a little gutsier. Allow me to explain my reasoning:

Senzel, I assume, will be held back briefly at the beginning of 2018 for service time issues. Thought, if the Reds are ready to compete, they may put him in the lineup sooner. But once he comes up, they have to find somewhere for Suarez to play. And I do think Suarez will have to play because he’ll be one of the most well-rounded offensive players the Reds have. I think the most likely scenario involves some sort of odd rotation with various outfielders and infielders wherein Schebler loses the most playing time, though still playing with some regularity. There’s also a good chance Peraza or Herrera play poorly enough to get benched.

I think, simply, that Amir Garrett is the best shot the Reds have at a true number 1 starter and I think this will be clear by the All-Star Break next year.

I’m probably being a little ridiculous at catcher, but if Mesoraco can’t help, it’s hard to imagine the Reds making do with Barnhart for too much longer, so I can at least imagine Okey (who was drafted out of college, so is somewhat advanced) getting a shot by then. But really, in this instance his name represents the uncertainty at catcher, which is a position I can see being in a state of flux for several years still.