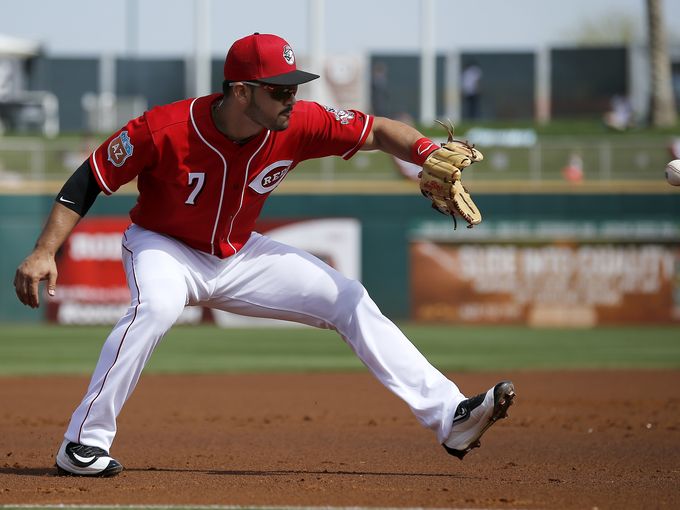 Doesn’t it seem like Eugenio Suarez is a forgotten man?

Suarez, of course, just finished a full season as Cincinnati’s starting third baseman. But the Reds’ top prospect — who may make his big league debut in 2017 — is Nick Senzel. Senzel is also a third baseman, and when he emerges onto the major league scene, it’s widely expected that he’ll immediately take over the duties at Cincinnati’s hot corner.

Over the last few months, we’ve spilled far too much digital ink about the logjam in the Reds middle infield. Most of that discussion has been about how the Reds need to get playing time for Jose Peraza at shortstop and Dilson Herrera at second base. Even though Suarez is a former middle infielder who may be without a position soon (see previous paragraph), his name is rarely mentioned in this conversation.

Meanwhile, quietly, Eugenio Suarez has done something that Senzel, Peraza, Herrera, and all of the other names in discussion for the Reds infield of the future (with the obvious exception of Joey Votto) have not been able to accomplish. Suarez has actually established himself as a legitimate major leaguer.

And that’s a big deal, as far as I’m concerned. Steve Mancuso has already discussed why this is a season for sorting, a season for figuring out what the Reds have and answering some questions about players about whom we have imperfect information (the young guys, mainly). Those questions have already been answered about Suarez. Many of them, anyway.

For example, Suarez improved his walk rate substantially over his 2015 performance (8.1% in 2016 vs. 4.3% last year). He also swings at a fewer pitches outside the strike zone than the average major league hitter (his O-Swing % was 26.6; the big league average was 30.3%). There’s no reason not to think that these he won’t continue to improve as he ages — and as he watches Joey Votto be Joey Votto. (Joey can be a very good influence.)

Over at MLB.com, Mark Sheldon took a look at some other developments in Suarez’s performance in the batter’s box:

But in an encouraging sign for a young batter of 25 still learning his way, Suarez showed he can hit to all fields. And because of the tools offered via StatcastÃ¢â€žÂ¢ and baseballsavant.com, we might have an idea why.

Suarez showed he had good command of pitches that were low and away last season. According to StatcastÃ¢â€žÂ¢, his 94.7-mph exit velocity hitting pitches in the lower 1/9 of the strike zone was the highest among right-handed hitters in the Majors (minimum 50 results). In that part of the zone, he also batted .339 (12th) with a .597 slugging percentage (fourth).

Although the sample size is much lower, based on a minimum of 10 instances, Suarez’s 101.4-mph exit velocity hitting against left-handers over the lower ninth of the plate also led big league right-handed batters.

Mark digs down into the Statcast data a little more over there, so I encourage you to go read the whole thing.

Is Eugenio Suarez on the verge of becoming an All-Star? I don’t have any idea. What I do know is that he’s been a pretty good big leaguer through his age-24 season, and that usually bodes well for a player’s future. And for those of you who have been underwhelmed by what you’ve seen of Suarez thus far:

Frankly, the more I look at Suarez, the more I think he really should be a big part of the Reds’ long-term plans. If the Reds believe that Suarez is the third baseman of the future — and I’m more than happy to subscribe to that theory; Senzel appears to be the real deal — I’m really not sure why Suarez shouldn’t be considered the second baseman of the future. After watching him at SS and 3B these last two seasons, there’s no doubt in my mind that Suarez could handle second base defensively. And his bat will play better at 2B than it does at 3B.

Here at the Nation, Jason Linden wrote recently that he thinks Suarez will be the breakout Red of 2017. I know I’m more optimistic than the average Reds fan, but it’s not a stretch for me to subscribe to Jason’s theory:

Track Record
In the minors Suarez hit. He hit and hit and hit. And he took walks while doing it. In his first two partial major league seasons, the plate discipline wasnÃ¢â‚¬â„¢t what youÃ¢â‚¬â„¢d have hoped, but in 2016, we saw evidence that he was getting comfortable. This is especially true if we give him a bit of a pass on his horrible May, which was uncharacteristically terrible and came while struggling at third base (hard to imagine he wasnÃ¢â‚¬â„¢t in his own head a bit). This is a player who was going to hit, and now heÃ¢â‚¬â„¢s started to.

Expectations
HereÃ¢â‚¬â„¢s what I think will happen:

The result: I think SuarezÃ¢â‚¬â„¢ floor this year is about 3.0 WAR. His ceiling is probably around 5.0 WAR.

Keep an eye on Eugenio Suarez this season.Ã‚Â And keep him in your long-range plans for the Reds.*

Suarez is 24 years old. You know how many HR Todd Frazier hit at age 24?