Three days ago, the Reds signed reliever Drew Storen to a one-year, $3 million deal, which given that I’m the guy who said “I don’t think the Reds should be spending any money on a centerpiece reliever at all” and “do not go chasing bullpen help, Mr. Williams, I beg of you “should make me quite angry. And yet, I’m pleased with GM Dick Williams’ savvy for one reason and one reason only: University of Alabama head football coach Nick Saban.

Briefly consider the University of Alabama’s revolving carousel of offensive coordinator madness. When Saban brought in Lane Kiffin three years ago, it was denounced as one of the dumbest decisions in college sports because Lane Kiffin is Lane Kiffin. Then, this year Saban brought on Steve Sarkisian who is a decent coach with a fair amount of baggage to work under Kiffin. Then, a week before the national championship, Saban fired Kiffin AFTER KIFFIN HAD ALREADY QUIT. Sarkisian was promoted to offensive coordinator and somehow, some way Alabama got better by firing its second most important coach right before the last game of the season.

Understand the metaphor? If not, let me explain:

So how did signing a reliever change so quickly from the dumbest thing Dick Williams could do this offseason to a smart, potentially brilliant move?

Well, it mostly depends on if Drew Storen can be an “elite closer” (re: record a lot of saves) for the Reds in 2017. Once an “elite closer” in 2011, notching 43 saves, Storen lost his job at the back of the pen in 2012 after undergoing surgery before the season. In his absence, Tyler Clippard seized Storen’s job for 2012 and Rafael Soriano took the mantel for 2013 and 2014.

Storen, having returned to his previous shut-down form in 2014, was again named closer at the start of the 2015 season, recording 29 saves before the Nationals traded for Jonathan Papelbon and reassigned Storen once more. An offseason trade sent Storen north of the border to Toronto, and then a midseason trade out west to Seattle. At both stops, Storen struggled, seeing his fastball velocity dip a point and a half but still striking out 21.1% of batters.

Because of his struggles, the Reds signed Storen at a $5 million discount from his 2016 salary‚ a steal by definition. Storen gave up more hard hit balls last season than he ever had before by a significant margin (35.6% to 25% in 2015) but he also induced far more ground balls (1.54 GB/FB compared to 1.02 in 2015), so maybe he’s learning how to pitch with decreasing velocity. Regardless, if Storen can even remotely resemble his 2015, 2014, 0r 2011 self, then this contract will be more valuable to the Reds than any of the relievers I named two months ago.

To belabor the Kiffin metaphor, Williams is sweeping up talent at its lowest cost (USC rebuilt none of Kiffin’s value, let’s be real) with the hope that it can turn into something more. But what about the second half of Saban’s madness? Where does Steve Sarkisian fit into all of this?

Welcome to the Reds next offseason move, and I’ll warn you, it sounds ridiculous: The Reds should sign reliever Neftali Feliz.

Turning 29 during the 2017 season, Neftali Feliz is a former All-Star with a plus fastball still averaging 96 mph and touching 100 mph. Feliz went down with an injury last September, nothing major according to the Pirates, and was shut down for the season. Prior to the injury though, Feliz was having a bit of a renaissance year, striking out 28% and holding teams to a .204 batting avg. Feliz did give up hard contact at a decent clip (37%) leading to more home runs per nine innings (1.68) than ever before in his career.

That said, Feliz was the definition of shut down in 2010 and 2011 as a closer before the Rangers attempted to convert him to a starting role in 2012 and his subsequent Tommy John surgery midway through that season. Feliz then missed nearly all of 2013, pitched poorly‚ in 2014, worse in 2015, and then rejuvenated in 2016 as already mentioned.

Of course there are cons: a Tommy John veteran, high fly ball rates, high hard contact rates, no season better than “decent” since 2012. Yet, if the Reds can get Feliz on a team friendly deal and Feliz can produce, it’ll be like Saban’s pick up of Steve Sarkisian when no other program would touch him – low risk, high reward.

The side effects of pairing the Storen signing with a Feliz one are also wholly in the Reds favor. PuttingÃ‚Â two formerly “elite” closers in the pen might crowd out a certain Michael Lorenzen, hopefully sending him to the rotation. As Nick Carrington insinuated this week, Lorenzen deserves a chance to start, and we all know there’s at least one open slot with one of Amir Garrett, Cody Reed or Robert Stephenson starting in AAA. Why not let Lorenzen prove himself for the first month or so? If Storen or Feliz don’t work out, Lorenzen can always slot back into the bullpen in their stead.

This again follows the Saban mindset because you know what Alabama’s strength is? Hint: It’s not the offense.

While all of us debate how Sarkisian or Kiffin help the offense, Saban’s true star, defensive coordinator Jeremy Pruitt, can work his magic to a nation-leading 11 defensive touchdowns. For the Reds, hopefully the preponderance of young starting pitching can work its magic while we all focus on the resurgence of the bullpen.

The other side effect if Storen and Feliz do work out is that both then become attractive midseason trade pieces. And if the Reds can get Feliz for a deal similar to Storen’s, that’s two big bargaining chips for effectively the same cost as Rajai Davis (one year, $6 million to the A’s). And thus completes the metaphor as Kiffin and (eventually) Sarkisian move on, their value repaired under the watchful eye of Nicholas Lou Saban, Jr. 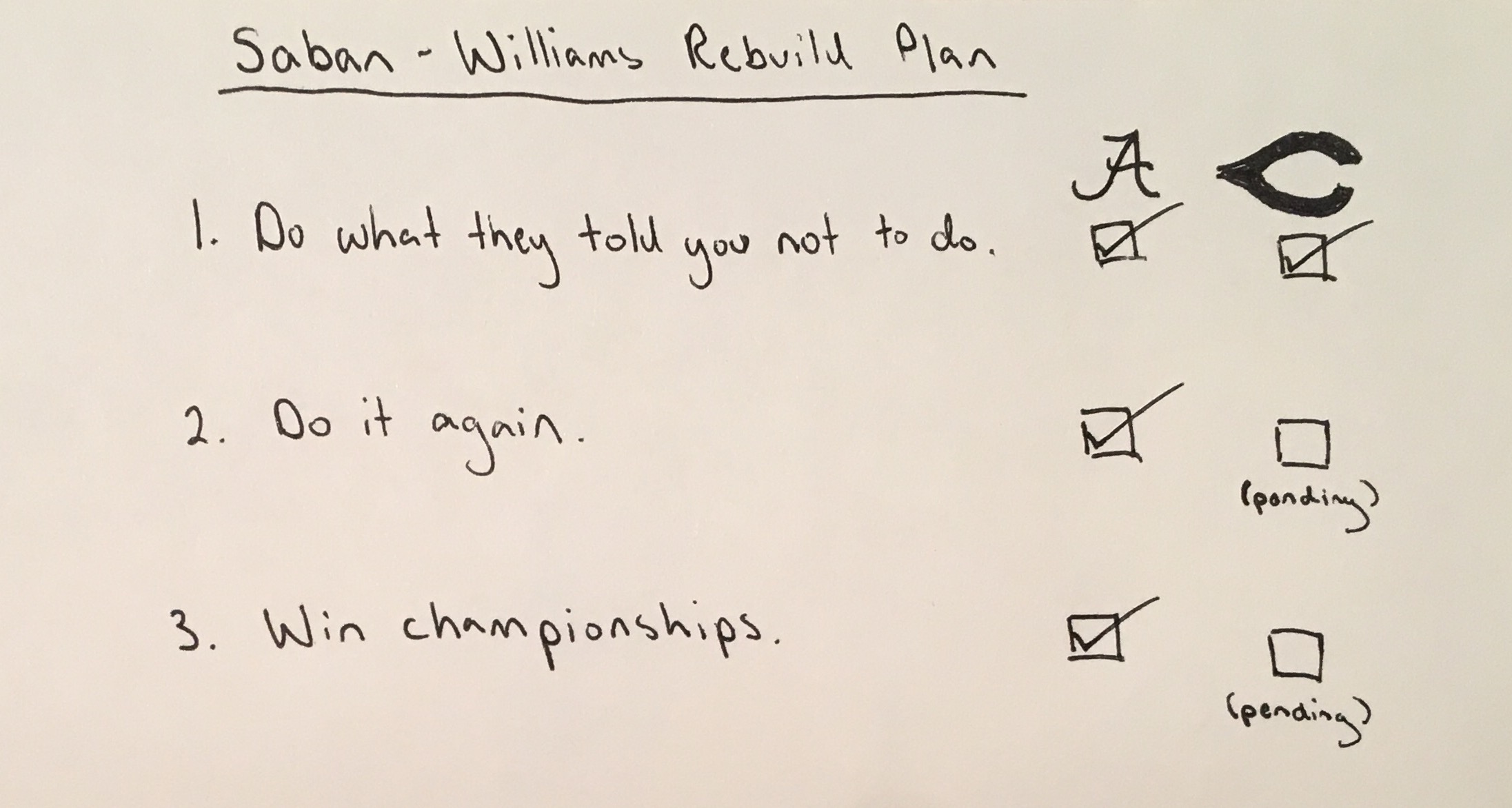 Excuse my horrible rendering of the Reds logo. I am a writer, not an artist.