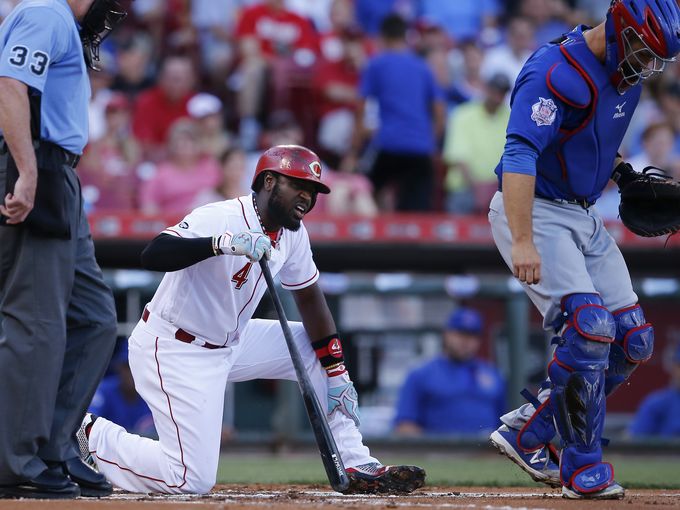 As a player who has played at least ten seasons in the major leagues, plus five with the same team, Brandon Phillips has the right to veto any trade. It’s part of the collective bargaining agreement, and BP has earned the right thanks to his long and productive career with the Reds.

Last off-season, Phillips blocked reported trades to Arizona and Washington. Today, we learned that he recently blocked a trade to Atlanta:

The Braves tried to acquire Phillips at the same time they were in the process of signing free-agent infielder/outfielder Sean Rodriguez, who agreed to a two-year, $11.5 million contract on Nov. 24.

The addition of Rodriguez, who figures to play often at second base, cooled the Braves on Phillips; the trade, in theory, is still possible, but the talks are unlikely to revive, sources say.

It was the third time in the past two offseasons that Phillips, 35, invoked his right to reject a trade as a player with 10 years of major-league service, five consecutively with the same team.

Last offseason, he blocked deals to the Nationals and Diamondbacks, then appeared in 141 games for the Reds, batting .291 with a .736 OPS, his highest since 2012. His defensive runs saved at second base, however, was a career-low negative-9.

The Reds, in the middle of rebuilding, could reduce the playing time of both Phillips and shortstop Zack Cozart in favor of two younger middle infielders, Jose Peraza and Dilson Herrera. Both veterans are entering their free-agent years, but the Reds also have yet to find a taker for Cozart, who cannot block a trade.

Phillips will earn $14 million this season in the final year of his contract. The Reds would have paid a significant portion of that sum to facilitate a deal and were surprised by Phillips’ rejection, sources say; Phillips is from Stone Mountain, Ga., and owns a home in Atlanta.

Most players require some form of compensation to waive their no-trade rights, and Phillips reportedly sought an extension from the Nationals last offseason. The talks between the Reds and Braves did not advance to that level, sources say; the Braves viewed Phillips only as a one-year stopgap, and the Reds already were including money in the deal.

For Phillips, though, the issue is not simply money, sources say.

He considers his refusal to accept a deal to be a matter of principle, and would want the team to address certain, unspecified issues before waiving his no-trade protection, sources say.

He considers his refusal to accept a deal to be a matter of principle. What does that mean?

I agree with Grant:

1. Don't blame BP one bit for using his rights.
2. Gotta cut BP before spring training if he's not traded.https://t.co/pbtvyBLSvz

And I agree with Mo:

BP doesn't owe the Reds anything.

Aside from $14 million that's all but spent, they don't owe him anything either. https://t.co/TjC60DmoT3

Phillips has earned the right to veto any trade, and so I don’t blame him for doing what he thinks is best for him. This isn’t fantasy baseball, it’s big business, and it’s Phillips’ job. He has to look out for number one. I’d do the same thing, if I were in his situation, if I thought it was the right thing for my career. (I flamed out in high school, so no worries on that point.)

But the flip side of that coin is that the Reds have a similar right to do what is best for the organization. And what’s best for this franchise is to move on from Phillips. Yes, the guy is the second-best second baseman in club history. Yes, he’s a team Hall of Famer.

But it’s time to move on.

The Reds were, according to the reports, willing to pay a portion of Phillips’ salary in order to trade him. There seems to be an understanding within the front office that the $14 million BP is owed in 2017 is a sunk cost. The Reds owe him that money — but they don’t owe him anything else. Brandon Phillips has been very productive for the Reds over the years, and the Reds have paid him handsomely for that production. You have to take sentiment out of the equation, which is difficult for fans to do. I get that. But it shouldn’t be difficult for a big league organization to do.

It’s time to move on.

Take a look at Mark Sheldon’s story. This burns me up:

If the Reds are unable to trade Phillips and Cozart, they are prepared to go to Opening Day with both players and use Peraza in a utility role to get at least four starts per week. Herrera would likely begin 2017 in Triple-A.

If Dilson Herrera is in Triple-A to start the season, and Jose Peraza is in a utility role playing four times a week, I give up. That’ll be firm evidence that the Reds aren’t serious about this rebuilding process.

If that happens, I’ll shut down Redleg Nation immediately.

It’s time to move on.