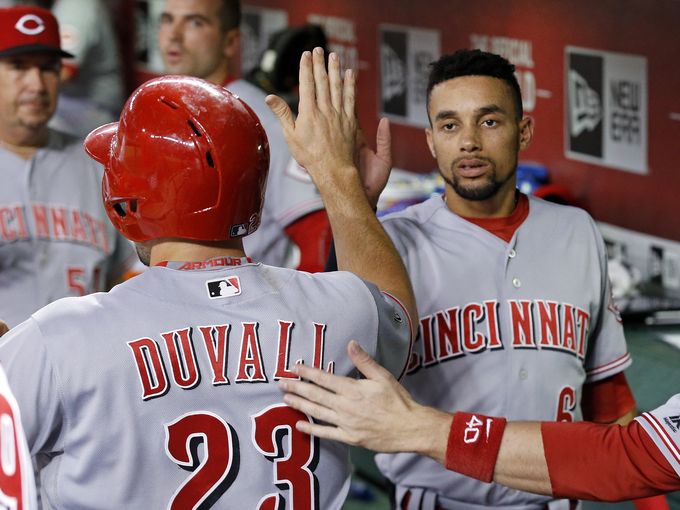 Reds general manager Dick Williams thinks you should be optimistic about the upcoming season:

“The last couple of years, we were preaching that we would have to make tough decisions, trade players, restock the system,” Reds general manager Dick Williams said. “I think people are starting to see the fruits of that labor. They’re starting to feel a little closer to the fun part where we start to contend again. You look around the diamond and the staff, there are question marks, but they’re question marks that are surrounding young, talented players. Those are the kinds of question marks you want to have, because you’ve got big upside.

“It comes with risk, but this is the point we were hoping to get to. We’re starting to get some of these exciting young players opportunities. This year, we’ll learn about what those guys can do.”

Okay, I can buy that. Williams is basically saying that this is a season for sorting. As a fan, I generally try to believe that the glass is half-full. Baseball is a diversion, so I have difficulty working up the anger that you see about the state of the Reds in some other corners of the interwebs.

I guess it’s true thatÃ‚Â I’m “starting to feel a little closer to the fun part where we start to contend again.” I don’t think I’m wearing rose-colored glasses when I say that things would have to go terribly, terribly wrong for the 2017 season to be as dismal as the last two years.

So yeah, I’m optimistic. How about you?

The remainder of Mark Sheldon’s piece that I linked above is an attempt to answer five of “the biggest questions the Reds face.” Those questions are:

1. Where will Jose Peraza play?
2. Who will complete the rotation?
3. Who will close?
4. Can Mesoraco still catch?
5. Can Hamilton build on his second half and stay healthy?

You can check out what Sheldon had to say about each of those questions here, and I’d be very interested in hearing your answers. Here are my quick responses:

1. Where will Jose Peraza play? If Jose Peraza isn’t the starting shortstop, you can safely ignore Dick Williams’ comments (see above) about making tough decisions. We’ll know very early in the season whether the Reds are serious about moving the organization forward by which names are primarily on the lineup card at shortstop and second base. If Peraza and Dilson Herrera (or even Eugenio Suarez) aren’t in those spots on most nights, then Reds management is not willing to make the tough decisions necessary to move this rebuild forward. And that will be a crime.

2. Who will complete the rotation? By mid-June, I predict that the Reds’ rotation will consist of Anthony Desclafani, Homer Bailey, Brandon Finnegan, Cody Reed, and Amir Garrett, with Dan Straily (and possibly Robert Stephenson) working out of the bullpen in Cincinnati. That’s presuming good health, which is a lot to presume.

3. Who will close? Who cares? Give the job to Tom Hume for all I care.

4. Can Mesoraco still catch? Yes. Can he still catch more than 50% of the games? Until proven otherwise, I’ll be skeptical.

5. Can Hamilton build on his second half and stay healthy? Yes, obviously. Billy Hamilton is probably the greatest player in the history of this franchise. Deal with it.