I made it a point this holiday season to make a trip down to the Reds Hall of Fame while I was in town. I was born and raised in Cincinnati, but have lived in Cleveland over the last three years. I have started visiting more MLB stadiums recently, and it is simply incredible how vastly inferior other clubs’ halls of fame compare to the Reds. The Reds operation is top notch. 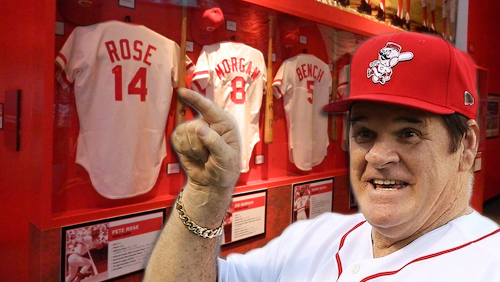 The Reds Hall of Fame this year feels more like the Pete Rose Hall of Fame with some other Reds sprinkled in. There is always lot of Pete in the Hall, but this year even more with Pete being inducted in June. That is great. There are many Reds fans who love Pete, and for them to be able to soak in that history is terrific.

I’ll go ahead and get this out of the way: I don’t like Pete Rose. However, that wasn’t always the case. While I never watched Pete Rose play live, I was instructed to worship the ground that Pete walked on….and I did just that for a long time. The older I got, the more I realized that Pete did cheat baseball, was a compulsive liar, and I simply could no longer blindly love #14. Ã‚Â I always say to those who can’t believe my stance on Rose “what would you think of Rose if he played the bulk of his career for the Cardinals?”

I still completely appreciate Pete’s accomplishments on the field, but his actions off the field have made me wish he would just go away and stop embarrassing the Reds. Those are just my thoughts, and I understand and respect that many will strongly disagree with that. I just wanted to preface this post with that.

Back to my Reds Hall of Fame visit. We are getting to the end of our wonderful visit. I am talking with one of the Reds HOF staff, who was very friendly and seemed to enjoy talking baseball. I mentioned how I think Reggie Sanders deserves to be in the Reds HOF. A different Reds HOF employee decided to jump in our conversation and rain on that parade. That employee then somehow, someway decided to for no reason tell me how terrible of a person Joey Votto is. He tells me and my group this ridiculous story about how Votto treated fans wrongly, and then goes into how terrible he believes Votto’s contract is. I tried to defend my hero, but I quickly moved on.

This example is far from the only loud Votto detractor that we regularly hear. It isn’t just casual fans either. There have been paidÃ‚Â writersÃ‚Â and broadcasters unfairly critical of the Reds first baseman. Which is actually very difficult to believe. Votto is coming off back to back seasons where he not only finished in the top 2 each year in wRC+ (lead the NL in 2016), but also finished third and seventh in the MVP vote.

This made me think of something that I’ve thought of many times before: how can Reds fans and media types worship Pete Rose, but hate Joey Votto?

I’ll get this out of the way too. Yes, Rose had more hits (1724 to 1380). If you want to make that your lone basis of evaluation on base hits and ignore home runs, runs batted in, average, on-base percentage, and slugging percentage, be my guest.

This isn’t to take away from Pete Rose or his career. He had 126 wRC+ and .371 OBP over his first nine seasons, which is really good. Another thing that made Rose so valuable was his position flexibility. Rose famously moving from LF to 3B in 1975 put a huge bat in George Foster in the lineup.

Votto surely will not age the way that Rose did. Rose was a one of a kind in that regard. The longevity of Rose’s career is remarkable and a major part of what made him so great. But, from the only numbers that we have of Votto now against Rose over the same career time-frame, there is no debate that Votto has been a much better hitter. One insane stat is that Votto has had an OPS of .900+ in 7 of his 9 full seasons. In Pete Rose entire 24 year career he did that just once (.940 in 1969), and was never close again (next highest .861 in 1968).

This might get taken by some as an anti-Rose post, but I assure you that was not my intent. I just simply want to point out that I don’t find it justifiable to criticize Votto for his performance as a Red if you are going to continue to worship Rose. You can certainly appreciate both, and you should, but in my humble opinion you can’t appreciate Rose without appreciating Votto.