It’s nearly Christmas and, as such, we should spend time thinking about the greatest gift baseball has given us in the last decade. I speak, of course, of Joey Votto. (Okay, okay, he’s probably really second behind Johnny Cueto’s Instagram).

We’ve pretty much all been on Hall of Fame watch with Votto since 2010. We have now reached the point where the majority of his career and certainly the majority of his value are behind him. He’s about to enter his age-33 season, so it seems like a good time to see what his chances are.

In order to get a good sense of where he stands among other Hall of Fame first basemen. I removed players who had the majority of their playing time in the 19th century, added Jeff Bagwell (who seems on track to be inducted this year) and put together a chart over at FanGraphs. Here’s what it shows. 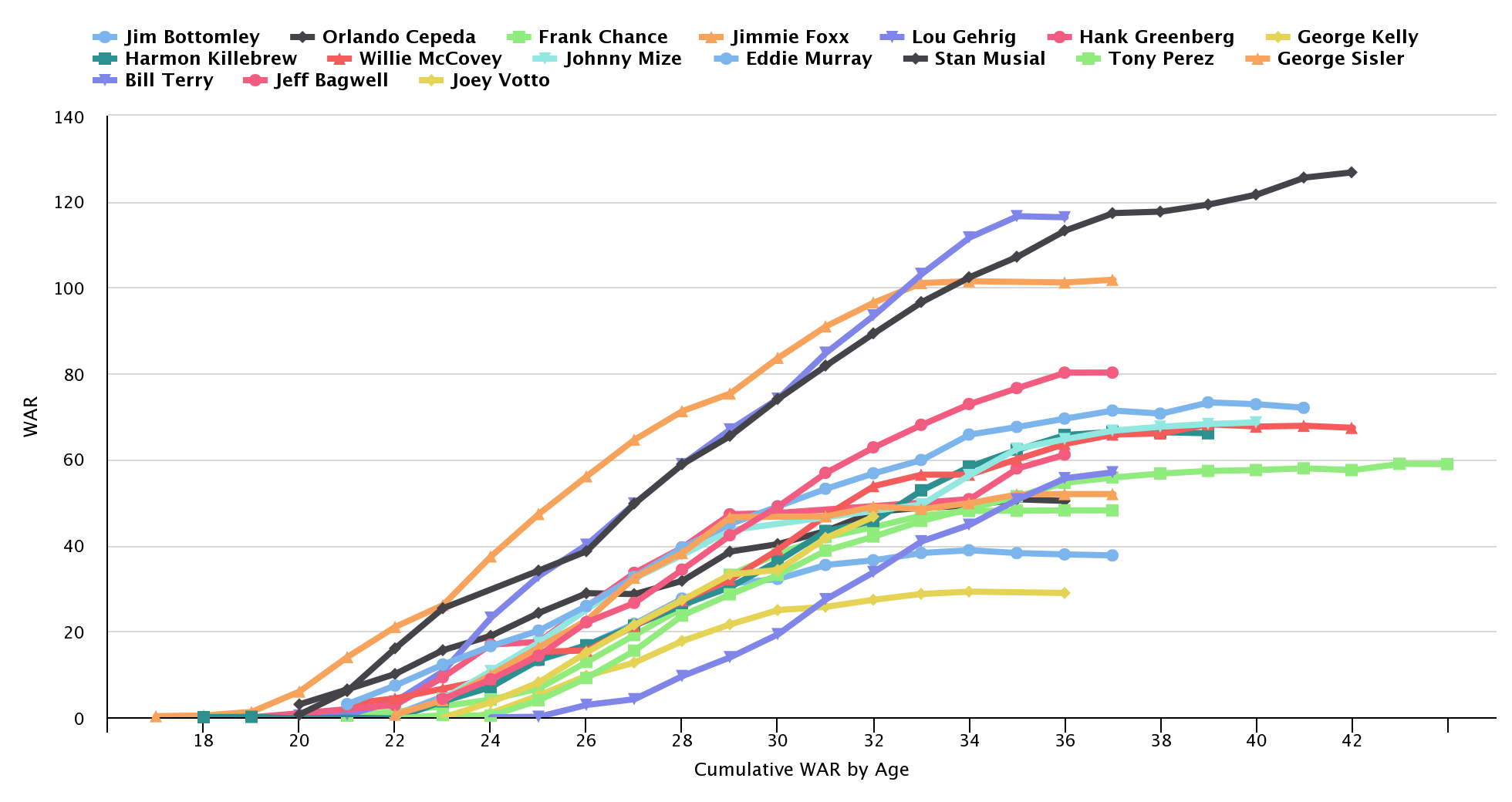 It’s really busy, but if you take a little time with it, some interesting things are revealed. For further assistance, here’s a link to the interactive version, which helps in finding everyone. There’s a first tier of Gehrig, Musial, and Foxx. Votto is not as good as any of them. This is not surprising. Those are your inner-circle first basemen.

Fourth is Jeff Bagwell. He’s kind of hanging out there by himself with his 80.2 career WAR.

At the bottom, you have George Kelly and Jim (second from the) Bottomley, who clearly don’t belong.

That leaves a pack of 8 players. Now you have to go to the interactive version or look real hard at the age-32 season for those players. You’ll find Votto and his 46.7 WAR right smack in the middle (yellow diamond, no seasons after age-32). Votto, Harmon Killebrew, and Orlando Cepeda all sit right on top of each other. These two — Killebrew and Cepeda — tell us what Votto needs to do.

Cepeda, if we’re being honest, probably doesn’t belong. He had one more good season and then he was basically done. Killebrew, however, managed to be an excellent player through his age-36 season and no one really doubts that he deserves his place in the Hall.

After 36, well, it’s not a pretty picture. Among everyone on the chart, Stan Musial is the only player to accumulate more than 4 WAR after his age-36 season. These are the greatest first basemen ever and they were all basically done at 36.

So, realistically, Votto needs to get himself to around 60 WAR in the next 4 years to be a serious contender. That’s an average of 3.3 WAR/year. If he averages 4.5 WAR/year during that time, he’s in the mid-60s and becomes something like a sure thing.

And that’s all pretty easy to imagine. Votto has just finished a couple of big years, but he does have an injury history. If his legs hold up, he’s probably in. If they don’t, well, it might never happen. But chances are, when Joey Votto has his 36th birthday, we will know if we need to think about reserving a hotel room in Cooperstown about 10 years later.