Occasionally, we feature contributions from loyal members of the Nation. This is Scott Woods’ second piece for RN (here’s his first). Enjoy!

On the surface, there would appear to be little to disagree with regarding those thoughts. After all, Cingrani was a main part of the one of the worst group of relief pitchers in major league baseball history. The bullpen was so ineffective, it set an all-time record for home runs allowed with two weeks remaining in the regular season 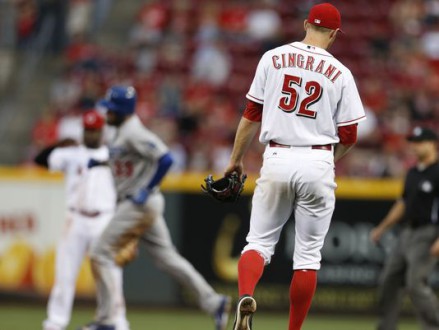 However, to paraphrase William ShakespeareÃ¢â‚¬â„¢s Julius Caesar, I am writing this not to bury Tony Cingrani in the bullpen, but to praise him and re-define his role. (I am certain that if Bill S. lived today, he would be the leading baseball writer of our time. The dramatic pauses the game offers would be right up his alley).

Before I lay out a plan to improve him in 2017, letÃ¢â‚¬â„¢s review what Tony Cingrani has not been good at, at least up to now:

-He hasnÃ¢â‚¬â„¢t been good enough to date in high leverage (game potentially on the line) situations to justify being in the closerÃ¢â‚¬â„¢s role.

-He hasnÃ¢â‚¬â„¢t been good enough to date in relief versus left-handed batters (many in high-leverage situations) to justify being the teamÃ¢â‚¬â„¢s LOOGY (left-handed one-out guy).

-As noted here , he doesnÃ¢â‚¬â„¢t really throw another pitch consistently besides his fastball. ItÃ¢â‚¬â„¢s very possible that this contributes to his lack of success in key situations and to the high walks totals.

Now, I readily admit that these are small sample sizes, but that is what there is to work with in regards to relief pitchers. The Indians’ Andrew Miller, the gold standard of relief pitchers in 2016, appeared in 70 games and only pitched a total 74.1 innings.

Also, itÃ¢â‚¬â„¢s very likely that MLB teams have access to data that Joe and Jane Public (you and me) cannot see, which might easily explain why Cingrani has consistently been a better pitcher in day games than in night games. Look at his overall career numbers:

And, he has been remarkably consistent in two seasons of day game appearances at Great American Ball Park:

Maybe he is a morning person. Perhaps his routine is different for day games. Could be his arm action makes the ball harder to pick up during the day. It might simply be that he enjoys getting the breakfast burrito at FrischÃ¢â‚¬â„¢s on his way to GABP. (I know I enjoy getting one).

Whatever the reason, a pitcher who is effective at limiting home runs in GABP should be at least somewhat valued by the Reds. Great American Ball Park has ranked in the top 10 as a HR-friendly park for 12 consecutive years. And, left-handed relief pitching is not cheap to acquire. The St. Louis Cardinals will pay 30 year-old LOOGY Brett Cecil $30.5 million over the next four years, with a full no-trade clause, even though he had never visited St. Louis before.

-Do not bring him into any high-leverage situations, whether it calls for a LOOGY or not. If Raisel Iglesias and Michael Lorenzen are both going to be in the bullpen, it is a better use of Ã¢â‚¬Å“seat timeÃ¢â‚¬Â for them to handle those appearances.

-Especially in his daytime appearances, have him focus on throwing another pitch at the expense of using his fastball. Whatever edge he has during the day, it might be enough to keep him from being hit too much while he (hopefully) (finally) develops a true second pitch.

-Work on having him appear for longer than one inning. Perhaps the mastering of a second pitch will assist in the development of his endurance.

Tony Cingrani is a former third-round pick and was once considered one of the brightest prospects in the Reds organization. However, he turned 27 in July, and is no longer considered among the group of future Reds stars. Given the time invested in his development and the park they host games in, it would seem logical for the Reds to explore his potential as a truly unique specialist. In this upcoming #SeasonofSorting, there will never be a better time for this type of outside-of-the-box experiment.

Cingrani may never again be a closer, may never be a LOOGY. But, maybe, just maybe, he could be the GADGY (Great American Ball Park Day Game Guy) on the next contending Reds team.

Scott is a big fan of RLN and occasionally posts comments under the name Sliotar. A fan of all types of bat-and-ball games, he is spending the off-season watching Test cricket from the Southern Hemisphere.